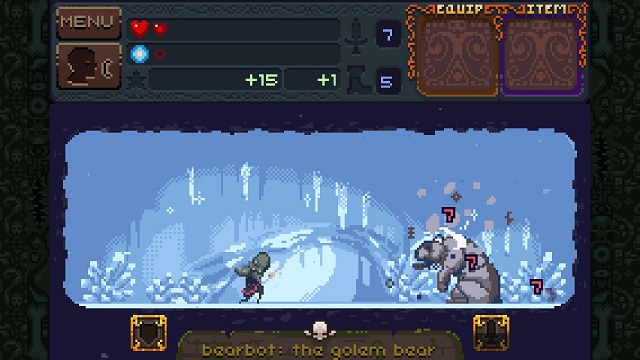 Are you a bad enough dude to venture into the Deep Dungeons of Doom and face off with Bearbot: The Golem Bear?

Another week, another Humble Weekly Bundle. Have I used that introduction before? Sorry. It’s hard to keep things straight when there’s a half-decent bundle every week.

This week, Humble Bundle are hoping you’ll want to spend your winter holiday ploughing through seven RPGs. At least, they claim they’re RPGs – it’s called “RPG Edition Book One”, in true RPG fashion – but a few of them make that description feel a little bit… shaky.

But enough pedantry! As ever, it’s a tiered bundle. The Pay What You Want tier offers Early Access multiplayer hack-and-slasher Skara: The Blade Remains, RPG Maker game Alpha Kimori: Episode One, and Avadon 2: The Corruption. I have played none of these, but the first Avadon was pretty good, so I can at least half-vouch for the sequel.

Pay more than the average (currently $4.40) to add in Consortium, a very weird narrative-based RPG that relies on a lot on player interaction and AI to move it forward rather than scripted paths, as well as Fighting Fantasy: The Forest of Doom and Deep Dungeons of Doom. Lots of doom in this tier. Again, I can’t speak to the quality of Consortium or Forest of Doom, but Deep Dungeons of Doom is an excellent little timing-based pseudo-RPG. I mean, it’s practically a phone game, but it’s a really good one.

Finally, $10 or more nets you a copy of Halfway, a turn-based strategy RPG that launched earlier this year.

So yeah, you can probably get away with saying that they’re all RPGs, but they run the full gamut of the genre. You’ve got an RPG Maker game, a multiplayer hack-and-slasher, an old-school CRPG, a game based on player agency, a gamebook, a superb little time-waster, and a turn-based strategy RPG.

You can view the bundle for yourself over here. As ever, all games unlock on Steam, and three of them (Avadon 2, The Forest of Doom, and Halfway) are also available as DRM free downloads.