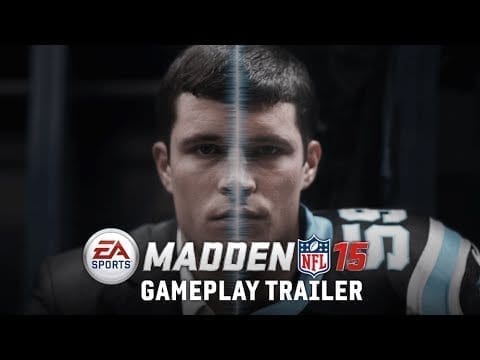 A new trailer has been released for the new Madden 2015 NFL football game, the trailer features Luke Kuechly LB for the Carolina Panthers and then on to some new gameplay footage.

DELIVER ON DEFENSE Set the tone on defense with more control thanks to an all-new arsenal of pass rush moves, contain the open field with intuitive tackling mechanics, and play as a team with redesigned zone and man coverage logic all while being immersed in the play from the other side of the line, with defensive player lock cameras. Madden NFL 15 delivers on defense. NFL FILMS

INSPIRED PRESENTATION Relive the greatest moments in games played with dynamic pre-game and halftime shows , and get your all-access field pass with NFL Films inspired in-game camera angles dropping you right in the heart of an NFL game. Gain a new perspective of the game with six new gameplay cameras to toggle through pre snap on every play. Madden NFL 15 features NFL Films inspired presentation.

KNOW YOUR OPPONENT Call your plays with confidence using data from millions of online games played by Madden gamers and test your new found skills through intense challenges and conditions in The Gauntlet. Madden NFL 15 gives you the advantage to know your opponent.