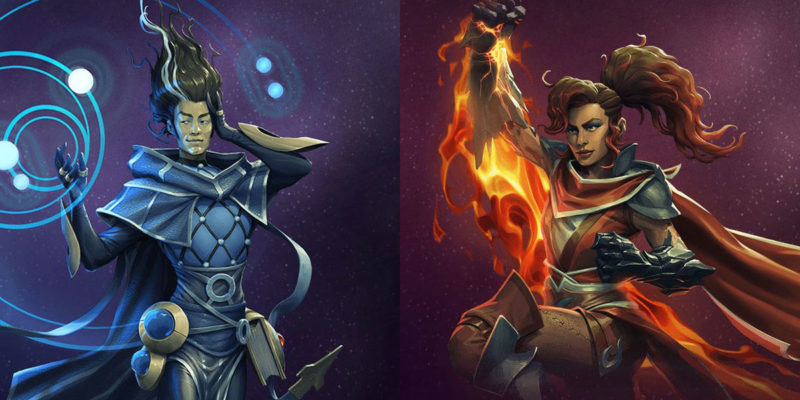 At The Game Awards 2019, Perfect World and Cryptic Studios finally revealed the MMORPG based on the world of Magic: The Gathering. The reveal trailer for the game, titled Magic: Legends, was very dramatic, but it didn’t give us much in the way of detail. Now, Game Informer has revealed an exclusive trailer featuring Magic: Legends and its gameplay.

The trailer gives us a look at some of the moves from two of the classes in the game. The character that floats around slinging spells and enemies is a Mind Mage. These are all about intellectual prowess. Mind Mages battle enemies from afar using psychic powers to control projectiles. They can also put enemies to sleep or turn them against their allies. In the trailer, we can see that their abilities include spells like Tidal Wave, Divine Wrath, Magnetic Pulse, Sleep, and Dominate.

The other character seen in the footage, the Geomancer, wields fire and earth. They’re much more inclined to get their hands dirty (pun fully intended). They get up close and pummel enemies with devastating lava and stone attacks, and their rock shield can absorb attacks that would level other Planeswalkers. Plus, they can summon creatures like goblins, kavu, and earth elementals to do their bidding. Some of the abilities they show off in the trailer include Seismic Grasp, Elemental Shatter, Molten Shell, and Pyroclasm.

The gameplay trailer also shows us how abilities will work in Magic: Legends. Players have four spells or abilities available to them at a time. When one is used, it is removed and replaced with a different ability. The game’s website calls the move sets ‘spell hands’. It also tells us that you will need to travel the planes to collect spells to use.

Since the game’s reveal a month ago, the Magic: Legends website has been updated. It now gives us a bunch more information about the story and game world. We already knew that players will take on the role of a Planeswalker (a being of great power), but now we also there is an ancient force moving in the darkness. Players will need to traverse the planes to gather the power they need to fight it.

As for the planes, two locations have been revealed so far. Both locations are on the plane of Dominaria and can be seen in the Magic: Legends gameplay footage. Shiv is a volcanic island inhabited by Ghitu tribes, goblins, ogres, and dragons. Benalia, meanwhile, is a church-state city comprised of rolling plains and dark swaps. The people of Benalia are at war with the Cabal fanatics and their demons.

The pre-alpha gameplay footage only shows two of the classes. Apparently, the game will have five come launch. As for when that launch will be, the description for the video tells us that Magic: Legends will come to PC in 2020. If you’re interested in delving into the Magic: The Gathering Multiverse, you can sign up for the beta on the game’s official site.