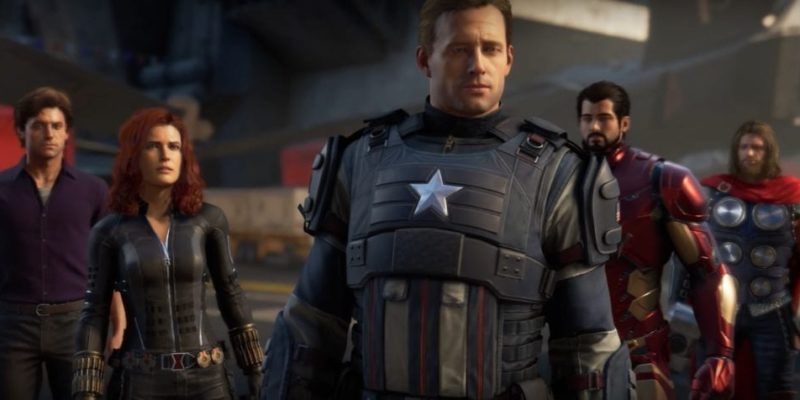 Marvel’s Avengers is trying to ride the Avengers hype train and possibly make one of the rare good comic book movie games. And now, we have leaked footage of the E3 2019 demo.

The video, which is now available on Reddit after it was taken down on YouTube, seems to have been filmed at the backstage of the demo run at E3. Therefore, you can enjoy all the quality of an Avengers: Endgame camrip. Just, this time, it’s for a videogame.

The leaked Marvel’s Avengers demo follows the action you could see in the E3 A-Day trailer. An attack takes place during “Avengers Day” celebrations, and the heroes rush to fight the bad guys on the Golden Gate bridge. Spoilers: they fail, the enemy bamboozles them, and superheroes get banned (happens in every other comic book story).

Since the fight in the leaked footage of Marvel’s Avengers takes place on the Golden Gate bridge, it looks extremely linear. Then again, you could say the same about every bridge battle in videogame history. You could also justify it since it looks to serve as the introductory mission of the game.

At any rate, you switch between the members of the Avengers team as new threats and challenges arise, thus learning their abilities and strengths. Black Widow’s portion looks the worst, but that’s probably because you can actually see what is happening; the screen’s brightness obscures most of the other superhero footage. The former Russian spy gets to engage in a long quick-time-event scene where she has to hit the flying bad guy that she’s riding in the head, a lot, before it dumps her atop of one the arches of the bridge. She then transitions to her other superpower: dual-wielding pistols.

The developers of Marvel’s Avengers have promised that heroes will have equal power levels in the game. That’s important for the co-op portion, as you can’t have duplicate player characters in the team. Now, whether all of them will be equally fun to play – and whether rage about Black Widow (you won’t see any mention of Hawkeye) being as powerful as Thor will shake the heavens – only time will tell.

By Mike Straw54 mins ago
Hardware