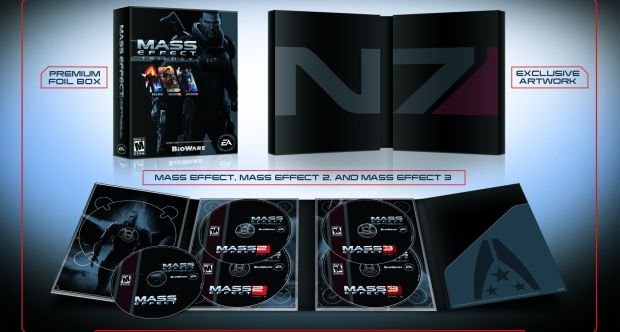 A great big unknown void surrounding the announcement of a Mass Effect Trilogy bundle on Wednesday of last week; namely, which of the many DLC components (if any) would be included with the base games? BioWare has now put up a page to answer that question, which deals with the PC and Xbox 360 versions of the release. Information about the PS3 bundle is promised in due course.

If you buy the PC copy, you’ll get ‘Bring Down the Sky’ and ‘Pinnacle Station’ for the original Mass Effect game, and all the Cerberus Network stuff for Mass Effect 2 (good old Zaeed, the slightly rubbish ‘Firewalker Pack’, Cerberus Assault Gear, Arc Projector heavy weapon, and ‘Normandy Crash site’ mission). Mass Effect 3 will, of course, have an online pass to let you play multiplayer.

The Xbox 360 version will be much the same, but minus the two add-ons for the first Mass Effect (for some reason). In other words, it seems that you get everything that came with the original retail releases of the games in the bundle – but nothing else.

Considering that the trilogy will sell for around $60 USD, it might be a bit much to expect a while wealth of DLC to be included. That said, the stuff from the first two games is anywhere between two to five years old at this point.

6 November is when you’ll be able to pick this up on PC or Xbox 360, with a PS3 release coming later.