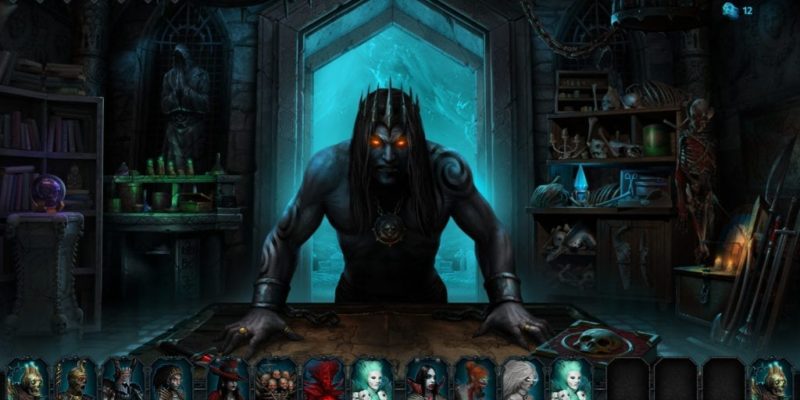 Almost every RPG has the same bones at the core of their stories. You are a good guy, and you must save the world from the big bad guy at the end. Iratus: Lord of the Dead from Unfrozen and Daedalic Entertainment is turning that on its head.

You play as Iratus, the titular necromancer, freshly risen from your grave. Now that you are back, your only mission is to destroy all those meddling heroes who killed you in the first place. The visuals and gameplay look very similar to 2016’s Darkest Dungeon, so if you’ve been craving more of that, you are in luck. You use a party of four warriors, each with their own unique abilities, to fight through enemies in 2.5D levels. Like Darkest Dungeon, Iratus is a roguelike, so permadeath is a consequence of losing for both your minions and your enemies.

However, as mentioned before, you won’t be recruiting agents of the light to quell the darkness. You are the darkness. You’ll need to raise your own army to take over the world. Iratus: Lord of the Dead has nearly 100 different minions for you to use in your battle against the forces of good. Those 100 or so are split into 16 different classes. You have your classic zombies, vampires, mummies, banshees, and so on.

One of the cooler ideas on display in the launch trailer is getting material for your undead army. How you build your army depends on who your army kills. You’ll need to harvest the corpses of your freshly defeated foes for components like hearts and bones to cobble together your own bastardized puppets. It is refreshing, in some sick way, to have a necromancer behave like a necromancer instead of a summoner. Forcing you to gather human material from the living adds to the risk-reward of each engagement with your foes. If this is done well, it could provide a good, extra layer of strategy as you consider where to allocate that last kidney or brain.

With the spoils of your bloody campaign, you’ll also need to build out your evil lair. Adding new buildings, each with their own function, will help you on your evil quest. Additionally, you’ll be able to flesh out your necromancer skill tree with four branching schools of magic: Alchemy, Magic, Ire, and Destruction. You’ll need every advantage you can get, as the game promises challenging combat. Iratus: Lord of the Dead will also offer multiple difficulty levels, so you can find the sweet spot that works best for you.

Iratus: Lord of the Dead has entered Early Access on Steam as of today. The developer is promising continuous updates through that period, with new content, features, and improvements that you would expect in this new age of the “live model of development” that is so popular on Steam. You can check out their full Early Access roadmap in the image below. 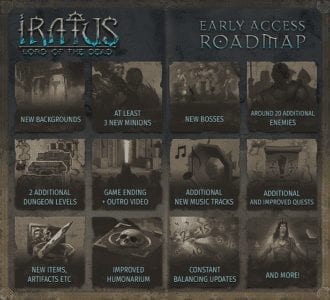