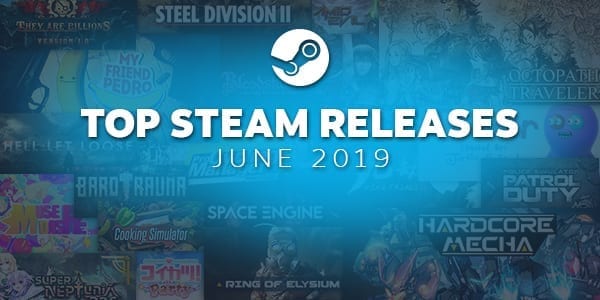 It can sometimes be hard to keep up with every release. It’s even harder to know what games to pay attention to and which you can put off. Thankfully, Steam has put together a lovely little list of all its bestsellers from the month of June. It gives a lot of insight into what people have been playing recently and what games you may want to check out. The list is ordered by release date and shows us the top 20 games of the month as well as the top five free releases. Let’s dig in a bit.

A selection of the top games of the month

June started off with a dandy little VR game from the mind of Justin Roiland. Trover Saves the Universe, released on June 4, packs an action-adventure game full of Roiland’s signature humor. You probably already know if this one is going to be your thing based on if you like Rick and Morty or not.

Next up is the brutal WWII shooter Hell Let Loose. The game features some of the most intense action I’ve experienced in a shooter to date. With its recently released Utah Beach update, it might just be time for you to enlist.

Originally released on the Nintendo Switch, Octopath Traveler made its Steam debut on June 7. The throwback RPG lets you follow eight characters through their personal stories. The game itself isn’t perfect, but with a solid combat system and great visuals, it can fill that JRPG void in your life.

They Are Billions just came out of Early Access this last month. The steampunk RTS charges you with saving the last remnants of humanity from an overwhelming horde. We haven’t had too many meaty RTSs to enjoy lately, so this one is definitely worth checking out.

Bloodstained: Ritual of the Night made a strong impression with our team. Koji Igarashi’s latest work is a pitch-perfect spiritual successor to Castlevania: Symphony of the Night. The game is large and full of secrets, so make sure to hit our guides if you need a nudge in the right direction.

The last game I want to address directly is Ring of Elysium. This battle royale graduated from Early Access on June 24. It is the second-best performing free-to-play game of the month on Steam. The unique hook of having natural disasters and integrating snowboarding as a movement mechanic seems to have hit home with players.

Unsurprisingly, Dota Underlords — Valve’s answer to the Autochess genre that its own DOTA 2 helped spawn — served as the top free-to-play game on Steam for June. However, what is surprising is how many niche titles managed to make the list. Several simulators managed to take spots, including Cooking Simulator, Pro Cycling Manager 2019, F1 2019, Police Simulator: Patrol Duty, and SpaceEngine, a virtual planetarium.

A couple of these releases benefited from real-world events driving more interest to them. The Tour De France and Formula 1 season both kicked off shortly after the release of Pro Cycling Manager 2019 and F1 2019 respectively. This no doubt drove (no pun intended) interest to those games. Early Access also had a banger month. Seven titles that made the list either just entered or just exited their Early Access period. The folks over at Steam see that as a victory for the “live model of development that incorporates player feedback.”

Additionally, anime games made their mark, as both the adult-only waifu simulator Koikatsu Party (congrats perverts) and the decidedly less adult Super Neptunia RPG managed to snag spots on the list. Impressively, Nine Trials managed to secure a spot as a top seller despite releasing into early access right at the end of June, on the 28th.

Steam also gave us a little look into the past, showing Vampyr, Warhammer 40,000: Inquisitor – Martyr, Jurassic World Evolution, Crash Bandicoot N. Sane Trilogy, and The Crew 2 were the top five sellers for June 2018. Those games seem a little weak in comparison to this year’s heavy hitters.

That’s really just scratching the surface of what was popular last month. If you want to check out the full list, it is available on Steam’s community blog. Additionally, all the games are conveniently listed for sale on their own page.

Does anything on the list surprise you? Was there any game you felt was snubbed? Ones that should have made the list? Let us know in the comments below.

Taxi moments worth talking about