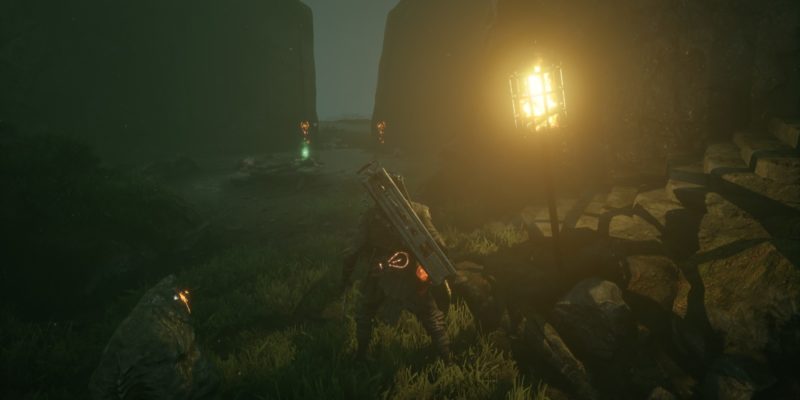 Like any Souls-like game, Mortal Shell has its own fair share of secrets. Primarily, you’ve got your stone statue chests and the fog mechanic. There are also NPCs such as Gorf and Brother Corvid, as well as a couple of endings. Oh, and just to be clear, this article will have spoilers. 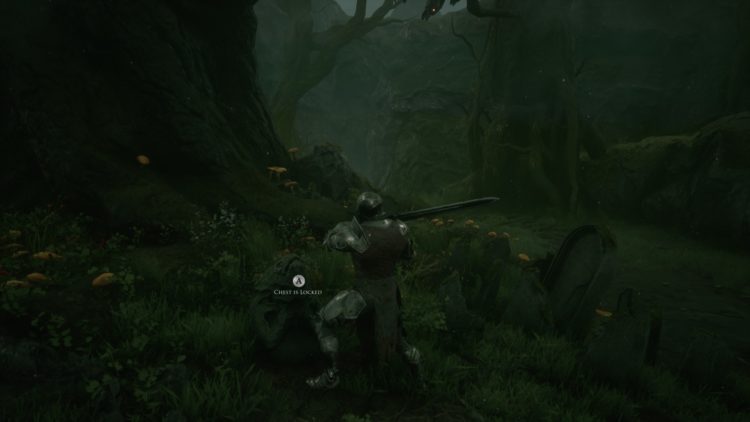 What you need to do first is to head to any of the game’s other zones. Then, progress further until you defeat the main boss in that zone — Crucix the Twiceborn, Imrod the Unrepentant, or Tarsus the First Martyr. After beating them, you can grab a quest item called a “gland” from the nearby receptacle. This will begin the “Gland Run” for that zone. 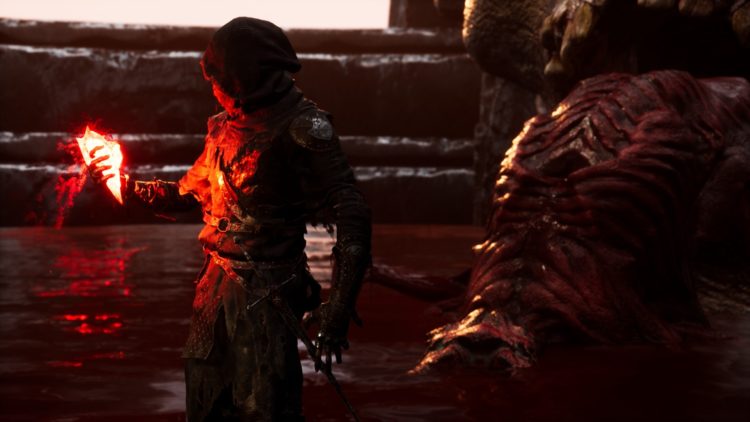 A Gland Run makes the entire location go dark with only a dim, red glow surrounding you. More enemies will spawn here, and even tougher ones will be roaming around. Your goal is to escape the boss’ lair and make your way back to Fallgrim. Oh, and fast traveling isn’t allowed. 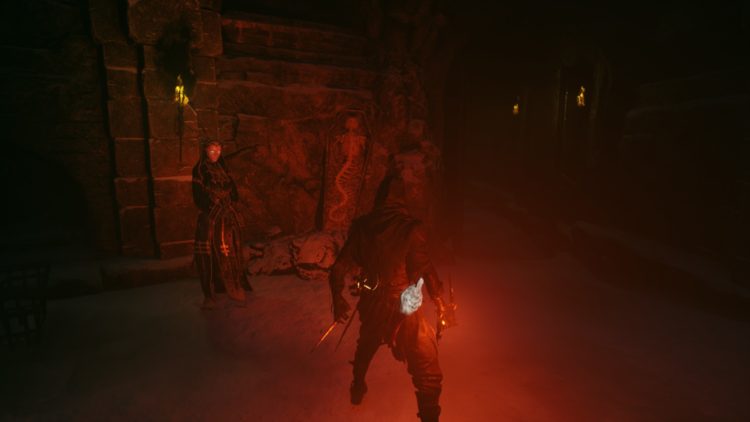 Fog-covered Fallgrim and its chests

Once you’ve returned to Fallgrim, your troubles aren’t over yet — that’s because you still need to reach Fallgrim Tower. Your exploration won’t be that easy-going either because the “Gollum-like” mobs have infested the region thanks to the mists. 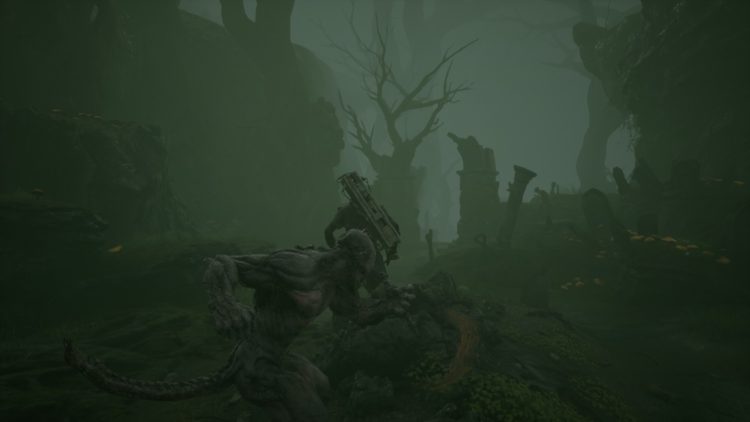 They’ll chase you, swarm you, and even leap on top of you to bite your face off. 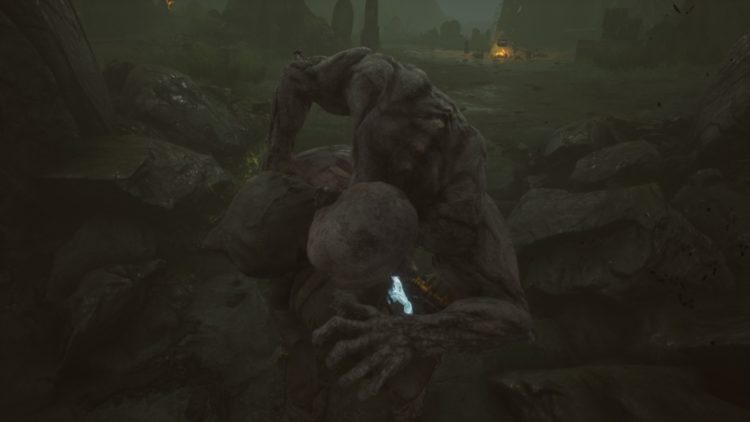 Still, you’ve probably noticed that the stone statue chests now have a red glow. Yes, you can now interact with them to get rewards.

A majority of these chests will contain consumables such as tokens, scrolls, upgrade materials, or effigies.  In essence, only a few are quite unique such as the “Molten Spike” — one of the upgrades for the Hallowed Sword weapon. 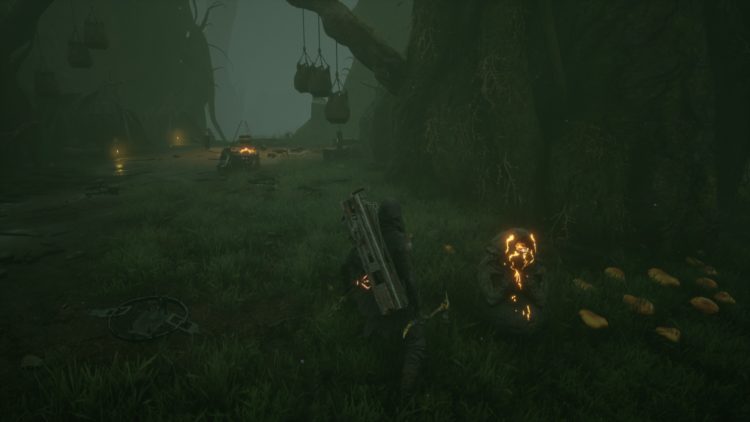 Likewise, you’ve got the “weapon swap” items (i.e., Sester’s Binding, Disciple’s Rag). These allow you to switch between different weapons you’ve unlocked in Mortal Shell. The clue is that if the stone statue chest in Fallgrim is close to an entrance to another zone, it’s likely that this is one of those “weapon swap” items.

Note: You can read more about their effects via our items guide. 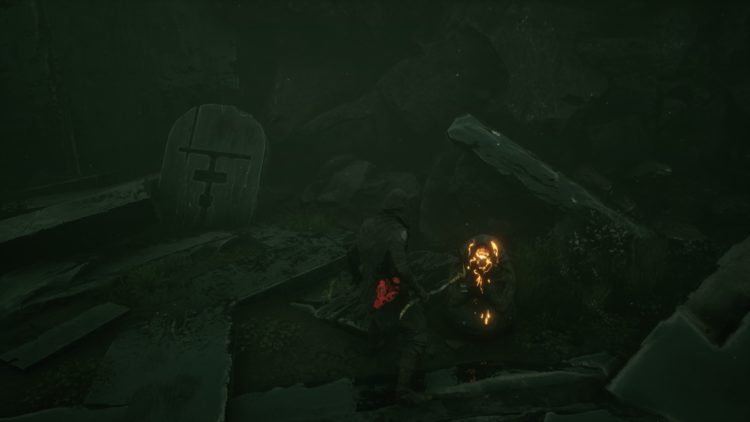 Let’s say you’ve returned to Fallgrim Tower, it’s time to give the gland to the Old Prisoner (the giant plague doctor bird) so you can have buffs to your enhanced riposte. But, who’s that… is that Death?

Well, no, it’s actually Thestus. Because you’ve obtained a gland and caused the mists to envelop the area (for the first time in your playthrough), Thestus has appeared. 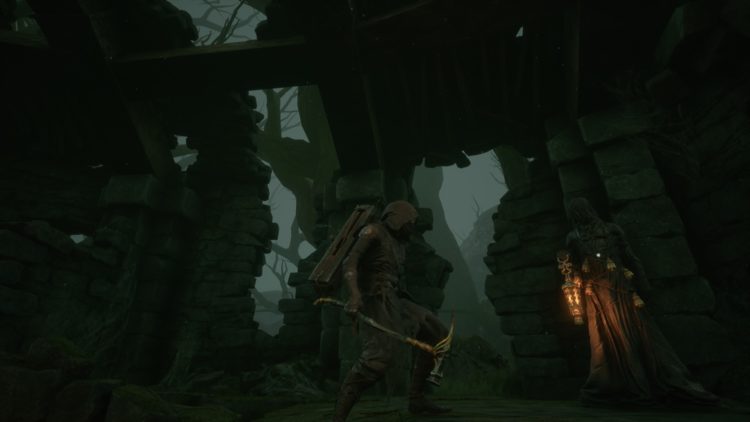 After giving the gland to the Old Prisoner, you can now ask Thestus to summon the fog again. This will let you continue exploring Fallgrim to open all those chests. Of course, you’ve gotta watch out for those aforemtioned Gollum mobs (and maybe even some extra Grisha minibosses roaming around).

Note: Telling Thestus to summon the fog will cost one glimpse. Telling him to turn everything back to normal will also cost a glimpse. 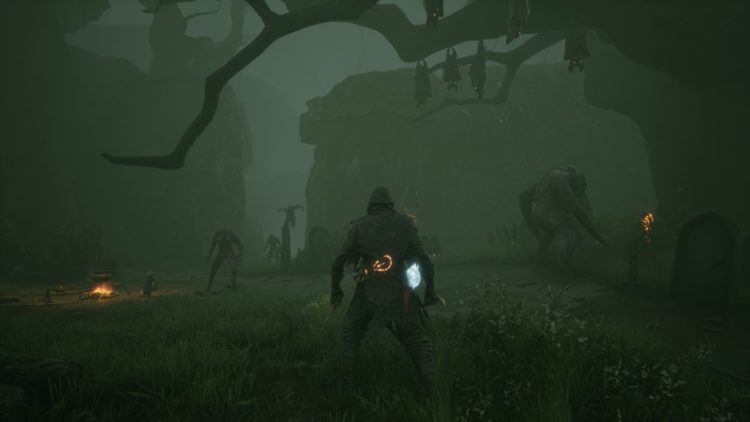 The endings, Obsidian Dark Form, and other characters

Mortal Shell has three endings. In our official review, I mentioned that I discovered the “joke ending” fairly early on in my playthrough. It involves an NPC named Baghead (who has a bag covering his head) asking you to become best friends forever and live the carefree life of a bandit.

You can watch the video below from YouTuber Gaming with Abyss to find out where Baghead is located:

The other ending is campaign-related. It involves completing the story and defeating the final boss, the Unchained. This will lead you to a New Game+ run.

The video below from YouTuber Rubhen925 has this ending along with footage of the game’s boss fights:

Note: There are rumors of a third ending floating around the net, one that involves Vlas. However, I was informed that there are only two endings in Mortal Shell (the ones I mentioned above).

Mortal Shell has a couple more NPCs that you’ll encounter during your travels. First, there’s Gorf (a frog) who’s found in Fallgrim’s swamps. It doesn’t really do anything, apparently. 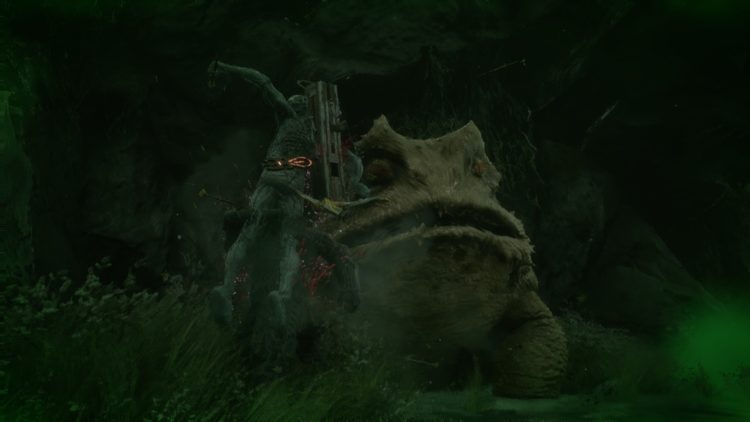 Lastly, there’s Brother Corvid who’s found at the Seat of Infinity – Dim Gate area. He’s kneeling down at the edge of a platform waiting for his doom. I’ve been told that there were additional dialogue options with him, but I haven’t found these at all. 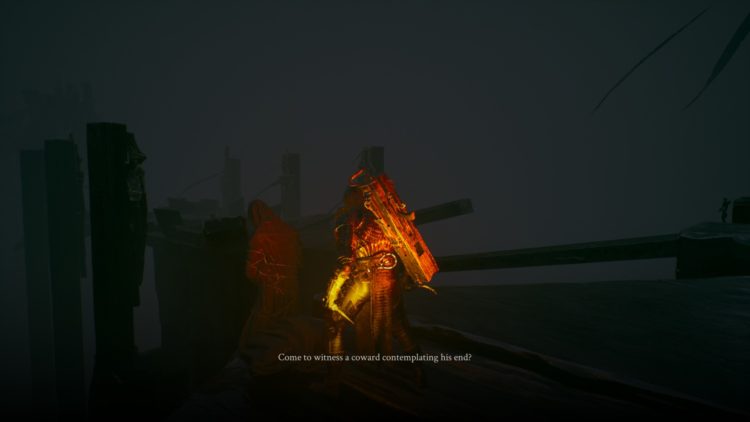 Let’s say Mortal Shell‘s initial challenge wasn’t enough for you and you want to make things tougher. You can do just that by finding the Strange Altar in Fallgrim. This will activate your Obsidian Dark Form — removing shells from you permanently.

In effect, Obsidian Dark Form just leaves you with a lot of stamina and almost no health. As such, it’s akin to a “no damage run” since a single hit from a mob will likely kill you already. Likewise, enemies will have increased aggression and they’ll be relentless. This is the ultimate challenge in Mortal Shell.

To find out how to activate Obsidian Dark Form, you can watch the video below from YouTuber Rubhen925: