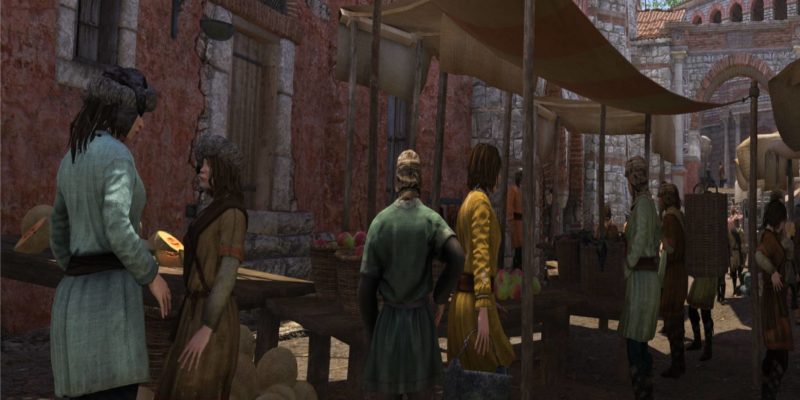 In a previous guide for Mount & Blade II: Bannerlord, we detailed increasing your renown to gain boosts to your clan rank, subsequently opening up more options as a mercenary and a vassal. This time around, we’ll take a look at the various actions that are available to your clan. These include forming new parties and checking your caravans and workshops.

Mount & Blade II: Bannerlord really opens up the moment you reach clan rank 1. Not only do you get to become a mercenary, but you also end up with more options for your clan.

First, take a look at your Clan menu (L). You should see your renown and the effects whenever your clan rank increases. You’ll also see the skills and perks of your companions. This is also where you assign various roles such as “Surgeon” or “Engineer” if you need some character skills boosted. Of course, you’ll want your character to remain the “Quartermaster” if you’re planning on increasing your party’s size via the Steward skill.

You’ll also notice that my funds are being bled dry. That’s fine since this is part of a trial run to explain your clan’s investments (more on these later). 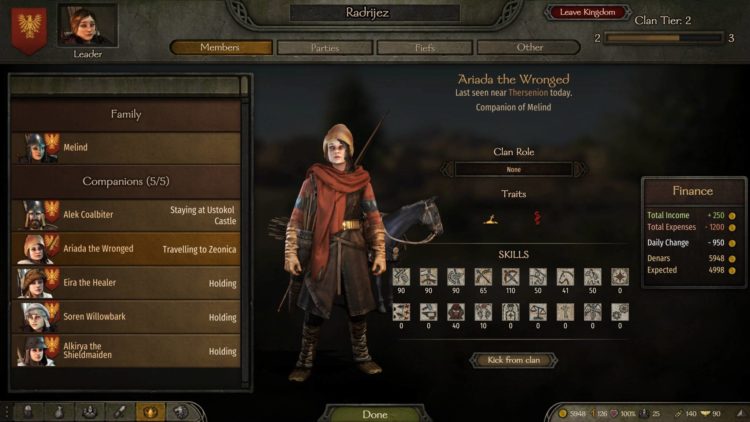 In the panel for parties, you can create another group led by a companion who’ll follow you around as part of your army. Your companion gets new recruits, but you’ll also incur higher upkeep due to having to pay additional troops. If you decide to disband your companion’s party, it won’t be instant. Your additional party will first travel to your nearest owned settlement before it fully disbands and allows your companion to rejoin you.

Similarly, you’ll see a tab for dispatched groups. This is whenever you’re given a sidequest and you decided to assign a companion to complete it instead. And, yes, this is also where you see your caravans, so, without further ado… 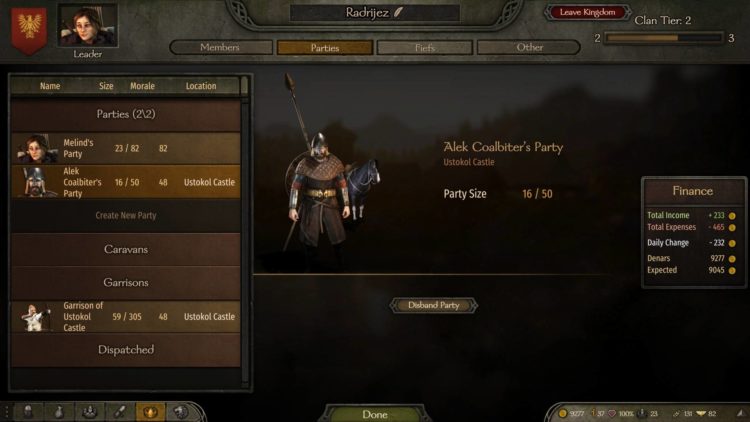 Forming a caravan is done by going to a city and speaking to any NPC that’s not a criminal gang leader (ie. merchants or artisans). You need to pay 15,000 gold to form one. The caravan will be led by one of your companions and it also comes with its own complement of guards. Your caravan will then start from the initial city and then pass through multiple villages and towns along the way. 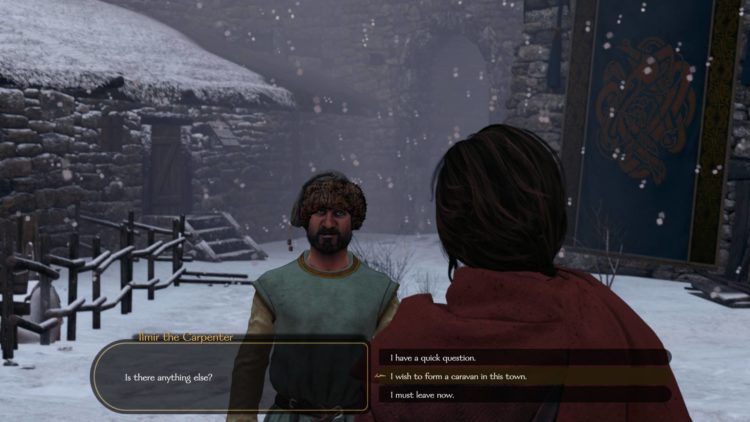 Caravans can be a little hit or miss. You could incur a ton of expenses because the value of goods keeps fluctuating, but there’s also a rare occasion when it might turn in a profit. Caravans that you own are supposed to increase your Trade skill, but this doesn’t seem to provide XP gains. You’ll likely have to go “buy and sell” some trade goods instead. 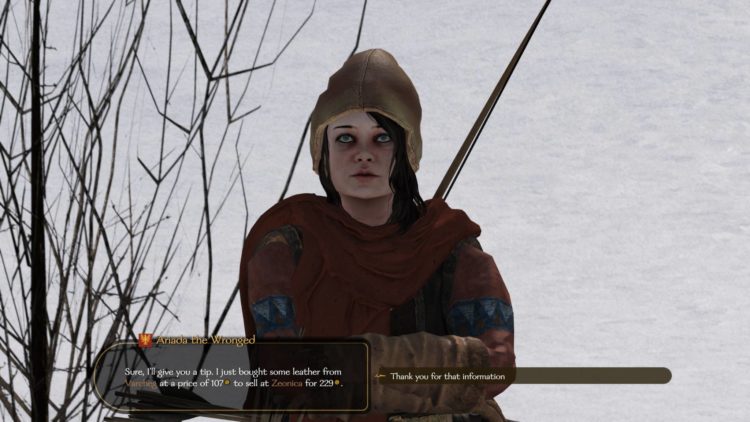 Do beware because caravans can get destroyed by bandits and hostile armies. Since Mount & Blade II: Bannerlord doesn’t have an “auto-follow” system, you’ll have to click on the caravan to babysit it while it’s traveling on the world map. However, if you’re too slow or the caravan enters a settlement, it’s possible to lose sight of it. Still, you can track where your caravan is by checking your clan menu -> parties. 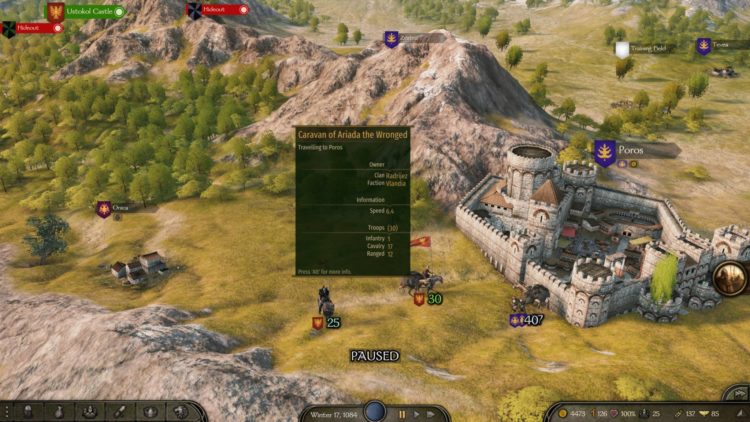 Workshops: The tools of the trade

To open a workshop, visit a city and hold the “Alt” key. This will show the names of various characters and landmarks. You’ll then see places of interest such as a Wine Press, Linen Weavery, and the like. Make your way to any of these locations and speak to a shop worker NPC. If you have the gold (roughly 13,000), you’ll be allowed to select from various types of workshops. It’ll cost you 2,000 gold if you want to change the workshop’s type later on.

Workshops give you gold passively and this can be seen on the relevant income page (clan menu -> other). Your clan rank also limits the number of workshops you can operate (ie. clan rank 5 = 6 workshops in total). 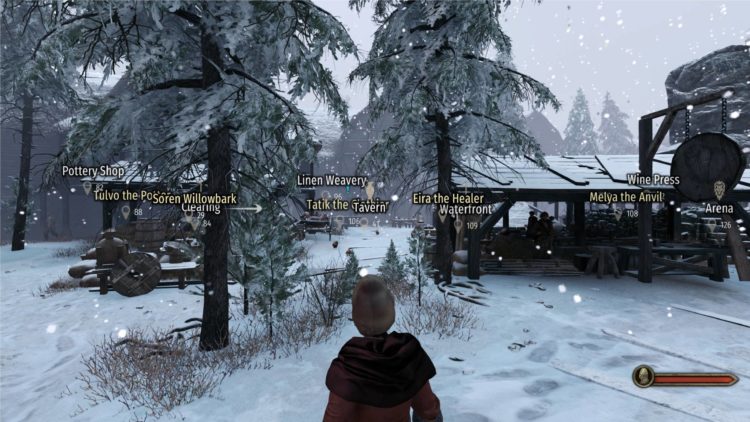 As for which types of workshops to build, you have to take note of the types of resources being produced in a main settlement’s “bound villages.” Simply head to a town and click on the trade menu. You should see a hammer icon on the upper-left corner of the screen that tells you the trade goods being produced.

The goal is to choose the type of workshop that can use these raw materials to turn them into finished goods. Remember that the cheaper and more abundant these resources are, the more productive your workshop can be. It’s a bit like doing trading runs while you’re playing with the game’s economy. You can also increase your workshop’s productivity through certain settlement buildings and kingdom policies as well via perks from the Trade skill.

Anyway, here’s a list of raw materials, the finished goods, and the type of workshop to build: 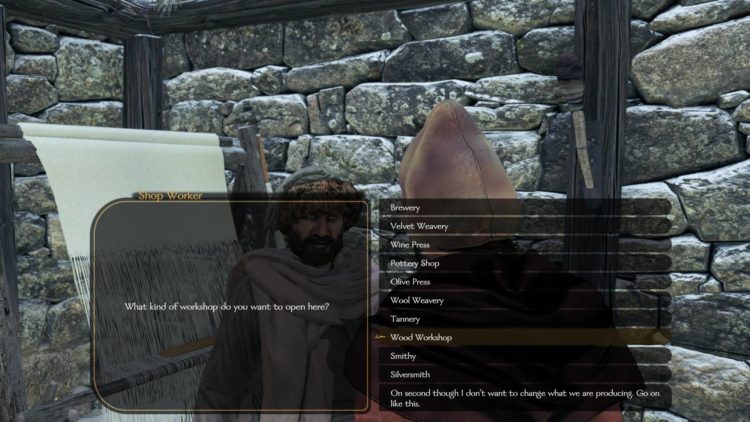 Once you get the ball rolling, a workshop’s value will increase over time (roughly a couple of in-game weeks). In some cases, this value might be around 25,000 to 30,000 gold. You can then sell the workshop and pocket the profits, or, better yet, rebuy the same workshop for the default value (13,000 gold). You should then use the extra money to buy a second workshop. You’ll sell both at a later date once their values have increased, exponentially increasing your profits in the long run.

Compared to caravans, workshops aren’t at risk of getting harassed by bandits, though you still won’t see the fruits of your labor until much later. To offset the initial expenses from your investment, you’ll want to defeat armies, sell loot, and ransom prisoners to continue earning gold all throughout Mount & Blade II: Bannerlord’s campaign.

Note: Make sure you don’t build a workshop in a city owned by a kingdom that you plan on invading. Being at war with a kingdom — or even your former liege if you were a vassal — automatically removes your ownership of any existing workshops in their settlements.