We’re moving forward just after your completion of “The Dragon Banner” quest which allows you to form your own kingdom in Mount & Blade II: Bannerlord. Truth be told, being a king or a queen follows the same concepts as those when you were still a vassal. You’ll still have the same panels on the Kingdom menu (K), except, of course, you’re the one ruling now. We tackle all of these “old-but-new mechanics” in this guide. If you decided to form our own kingdom in Mount & Blade II: Bannerlord, that also means you gained your independence from your liege at the end of “The Dragon Banner” quest. Since you were independent for a time, you’ve lost all that stored influence. Don’t worry because you’ll start regaining it soon enough. Now that you lead your own kingdom, every battle victory gives you influence including those against unruly bandits and looters.

Before we continue, let’s recap how you used to gain influence as a vassal:

Moving forward, your focus should be on your kingdom’s policies. As a vassal, you usually got shafted by some of these laws. As a ruler in Mount & Blade II: Bannerlord, the sky’s the limit since you always have the final say. These are the following kingdom policies that increase your influence gains (per day) in Mount & Blade II: Bannerlord:

Get Council of the Commons first followed by Feudal Inheritance. Depending on the multipliers, you should end up with +40 influence per day, allowing you to enact all the policies you want in a short period. There are also other policies that are extremely helpful in managing your kingdom and economy:

The Magistrates and Bailiffs policies, while they do add influence, are great for increasing settlement security. Towns with high securities also increase your relations (reputation) with the notable NPCs in the area. These are your merchants, artisans, and other characters who can provide you with more troops to recruit. You can also construct buildings and start projects. For buildings, prioritize those that increase influence, settlement prosperity, and additional militia units. For projects, these repeat indefinitely, so just select the “build house” option to ensure that prosperity continues to rise. Lastly, try to complete the quests from NPCs to help boost your relations in the area. Recruiting vassals to your kingdom

Try to build up your influence as a ruler and start enacting all the laws that can help you first. When you’re ready, you can start recruiting lords to your faction. Don’t worry, you’ll still follow the same mechanics that require a few dialogue checks and a successful trade acceptance.

Remember these tidbits of info:

Update: Patch e1.0.5 has made it harder to trigger enemy defections if you’ve previously captured settlements from their kingdom. It might still work if you’re at war, but you avoided grabbing their territories prior to recruiting them. 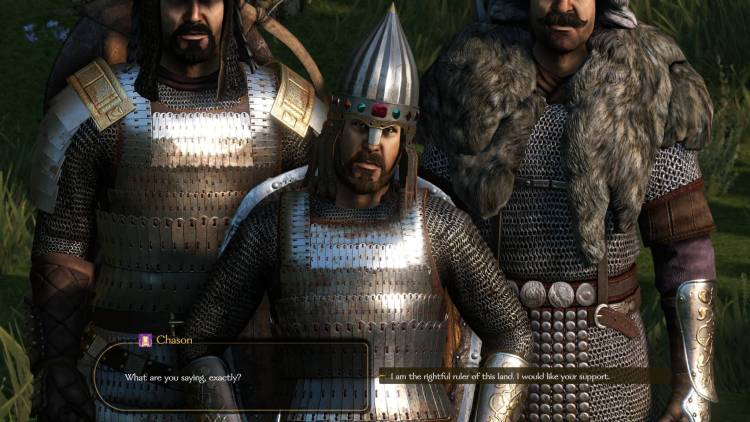 In my case, I already had numerous laws in place before I recruited my first vassal clan. You can even see that an entire clan is at a negative influence value in the image below.

Vassals with low influence and no settlements won’t be able to contribute much in your war effort. They can’t create armies and they can’t earn more cash. Of course, we’ll want to give them a helping hand. 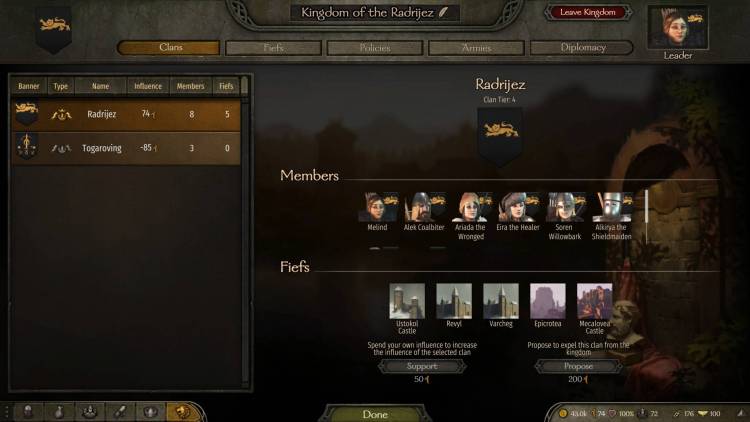 Let’s say you’re already gaining +40 to 70 influence per day. You could definitely spare some. As you can see in the Kingdom -> Clans panel above, you can choose to “support” a vassal clan so that it gains a small amount of influence. Likewise, this action also increases your relations by +2 points.

Now, with regards to fiefs, you can only give vassals a settlement when it was newly-captured. This will be put to a vote and you’ll have three selections. These can be random and you cannot change the options, though it’s possible that vassals without lands get prioritized. 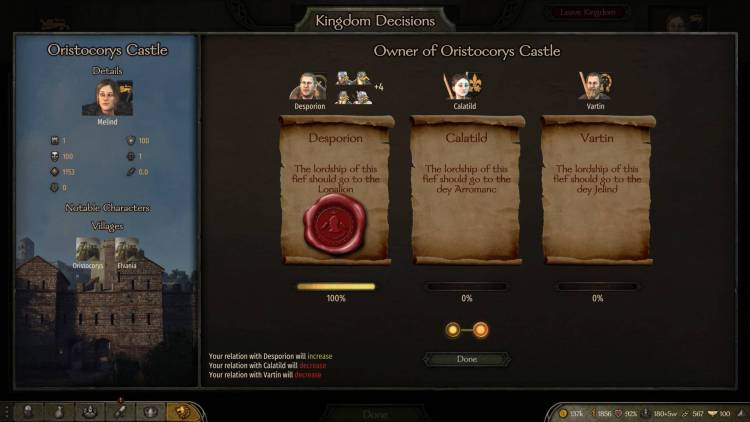 If you kept the settlement for yourself — or if you already had a settlement before your vassals joined — you can’t hand it over to them. If you go to the Kingdom -> Fiefs panel, the “propose” button simply won’t let you: 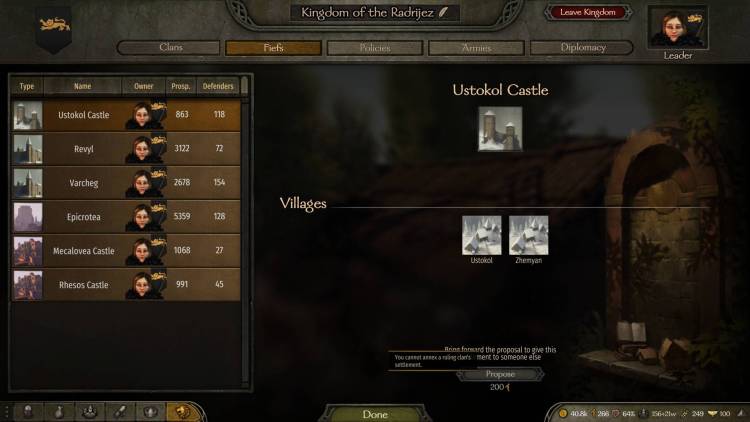 Similarly, you cannot give holdings to a vassal (or characters in other kingdoms) via bartering until you reach a higher level for your Trade skill. You’ll be able to obtain a perk that lets you exchange fiefs. It’s actually broken too since the AI will give you everything it has: As mentioned earlier, vassals with enough influence will be able to create their own armies. You can even attach them to your own much like when you were still the one following a liege.

The problem is that you don’t have a lot of control over what your AI vassals would do. They’re reliable enough in that they’ll form armies and march off to capture settlements, but you can’t direct them to specific areas or to support your advance. There may be times when they’d get their parties or armies annihilated just because they weren’t fully prepared.

Also, try to avoid donating high-tier troops to your vassals’ settlement garrisons. The latest hotfix makes them recruit all garrisoned units to their forces. 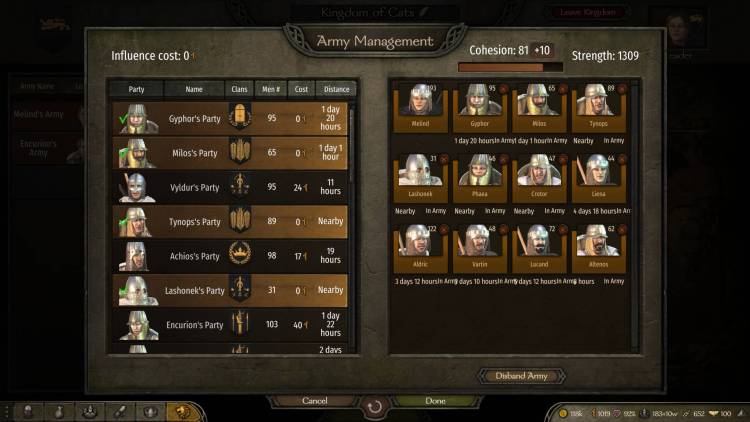