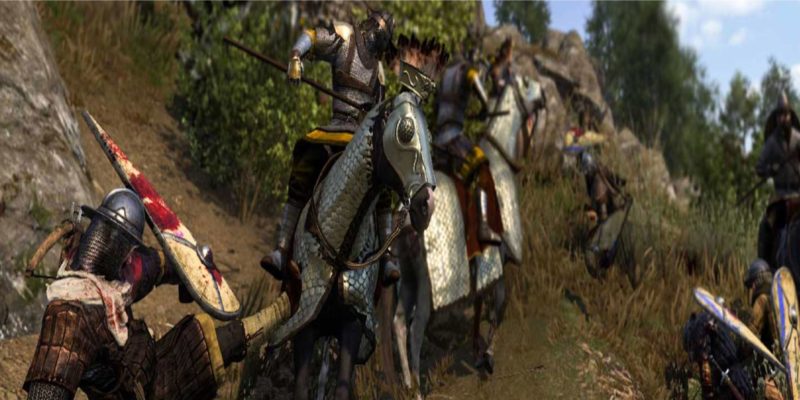 Mount & Blade II: Bannerlord is a massive game. At its very core is your capability to manage your armies and continue your conquests. Of course, you need to find the best units and troops as well. This guide discusses the troop trees for each culture or faction, special units, and how to recruit them. 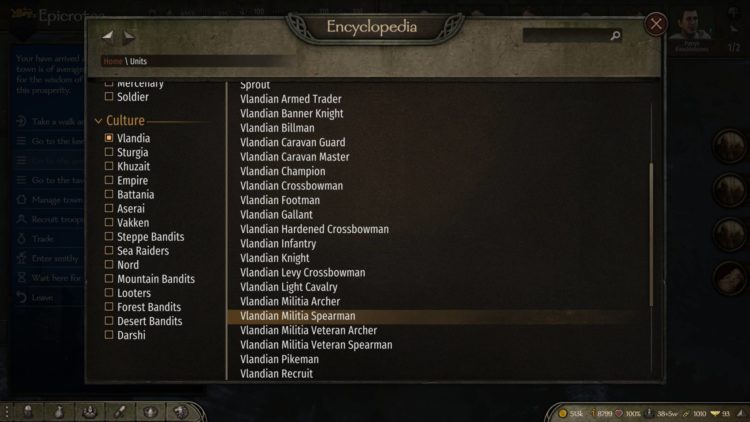 Mount & Blade II: Bannerlord – The best units for each culture or faction

You can easily check the unit upgrade trees in Mount & Blade II: Bannerlord by right-clicking on a unit’s portrait either in your party screen or encyclopedia (N). Remember that different factions or cultures also have their own unique units including special types. If you want to compare and contrast the stats of various units, you can view this detailed spreadsheet from r/MountandBlade Redditor Dupa-Ya-Sha.

All three Roman Empire-esque factions (the ones led by Lucon, Garios, and Rhagaea) share similar units. The faction also has several of the best heavy infantry units (the Legionary, Menavliaton, and Triarii), and great ranged troops (Palatine Guard and Sergeant Crossbowmen). 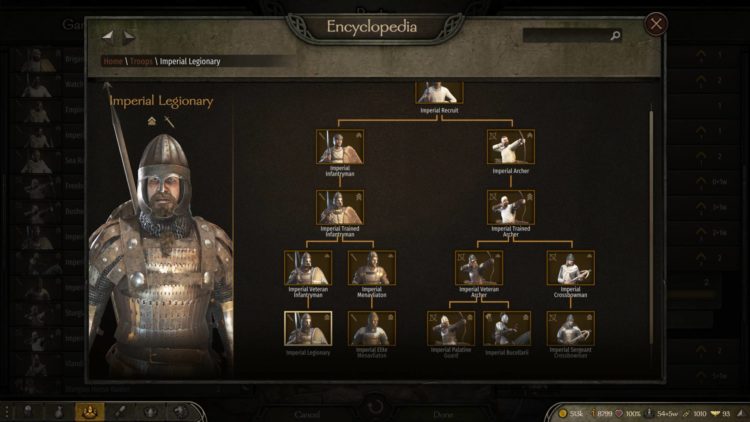 Their special units are the heavily-armored (and ridiculously good) Imperial Elite Cataphracts: 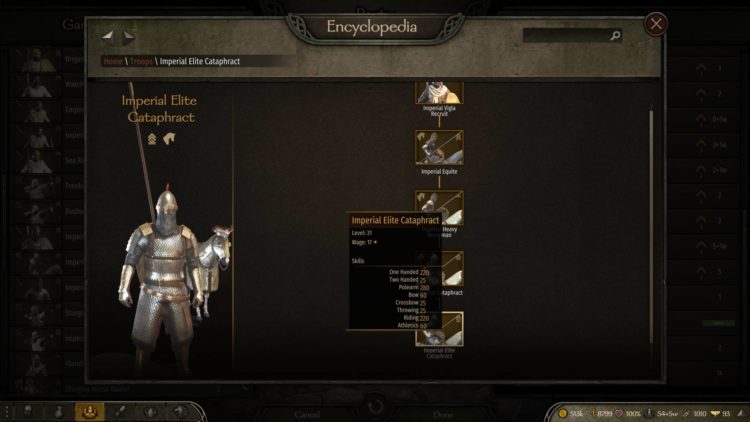 The Battanians are akin to the Celtic tribes of Europe with the fairly average Falxmen leading the charge: 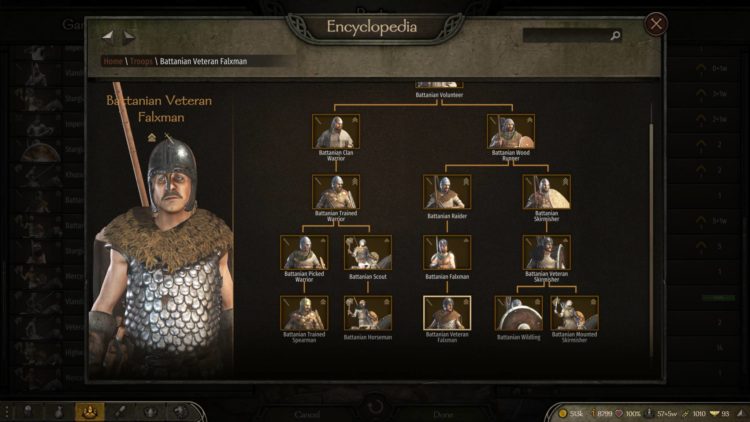 The unique unit that far outclasses everyone else, however, is the Battanian Fian Champion. These longbow users are some of the best ranged infantry in the game. In fact, Battania is the only culture that has a ranged special unit: 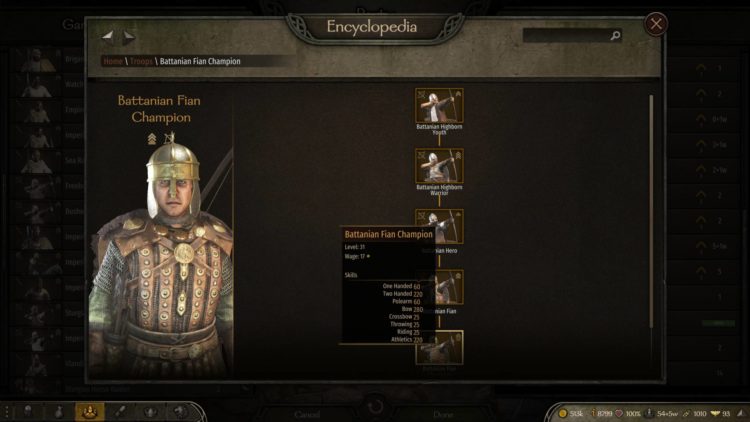 Far to the west, the Vlandians are your medieval Frenchmen with great anti-cavalry units like the Vlandian Voulgier and the tough crossbowmen, the Sharpshooters: 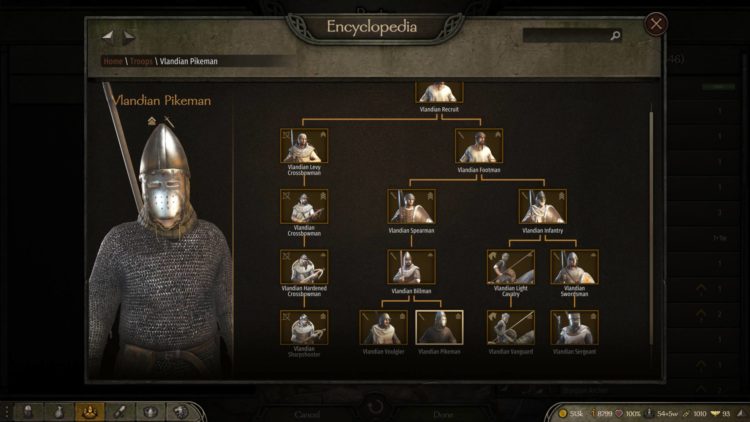 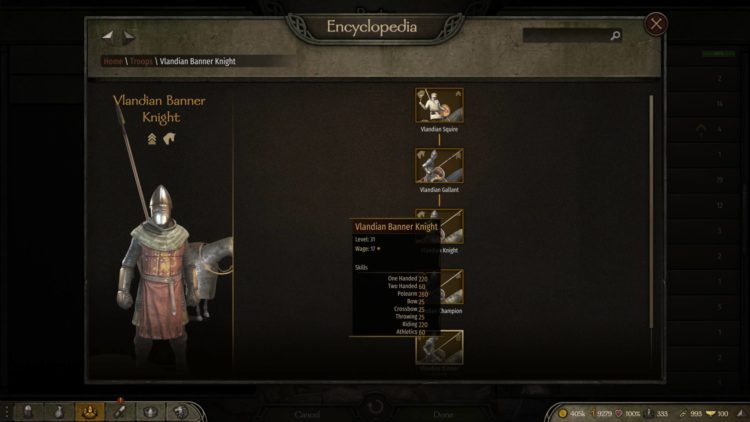 The Sturgians are akin to the Germanic and Viking warriors of old. They’ve got awesome anti-infantry options such as Sturgian Veteran Warrior and the two-hander-wielding Ulfhednar: 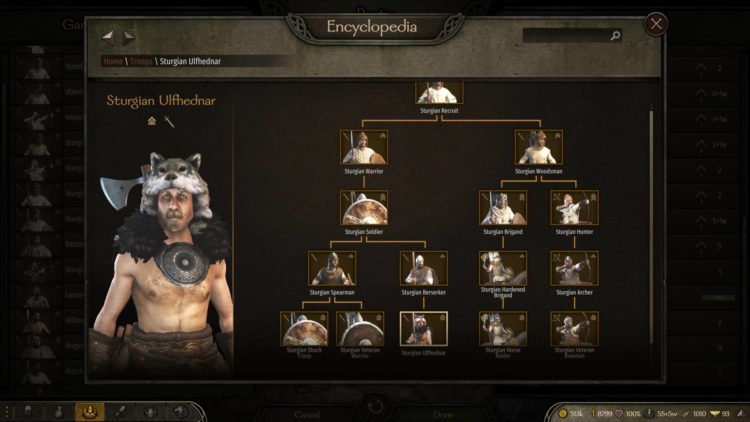 The Sturgian special unit — the Druzhinnik Champion — is also a heavy cavalry unit:

The desert lords of the Aserai have the formidable Mamelukes (ranged cavalry) and the Aserai Veteran Infantry: 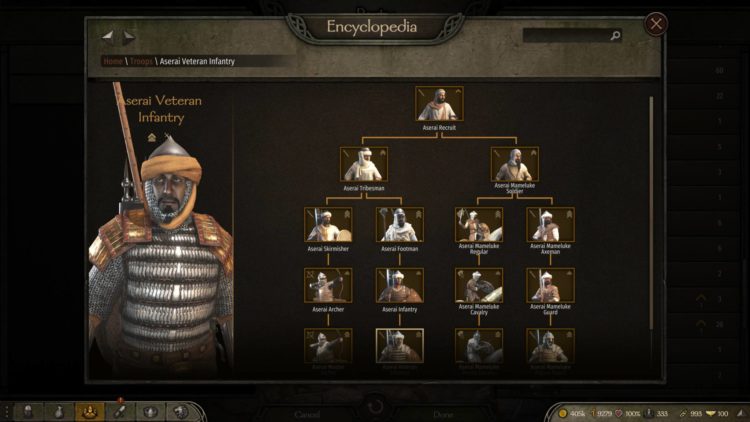 Similar to the other factions, the Aserai also have another special heavy cavalry unit, the Vanguard Faris which specializes in throwing javelins: 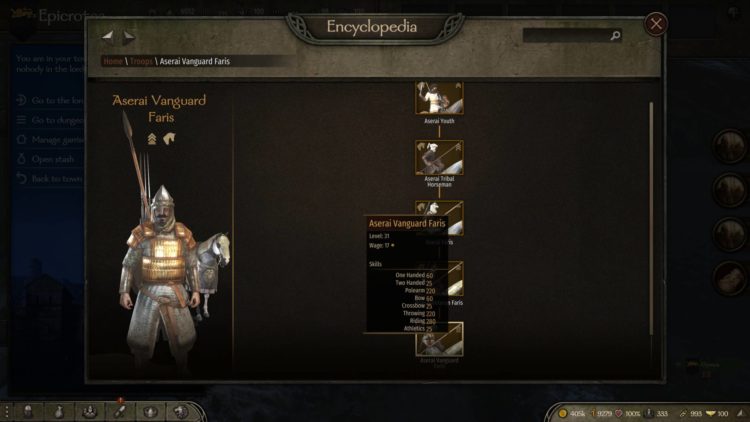 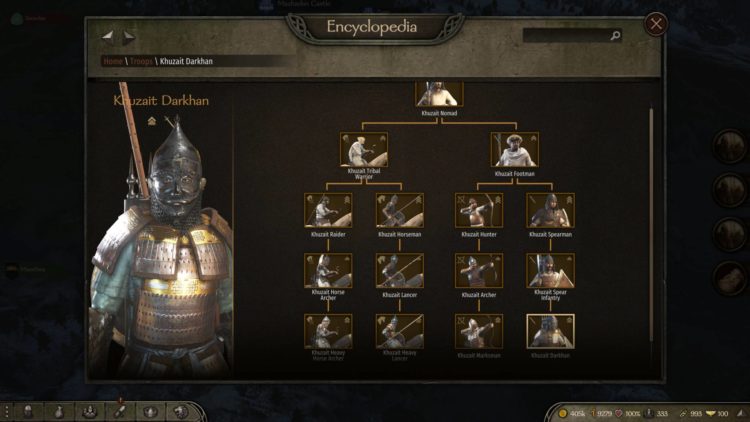 The Khuzait Khan’s Guard fire arrows while on horseback before charging in with their polearms: 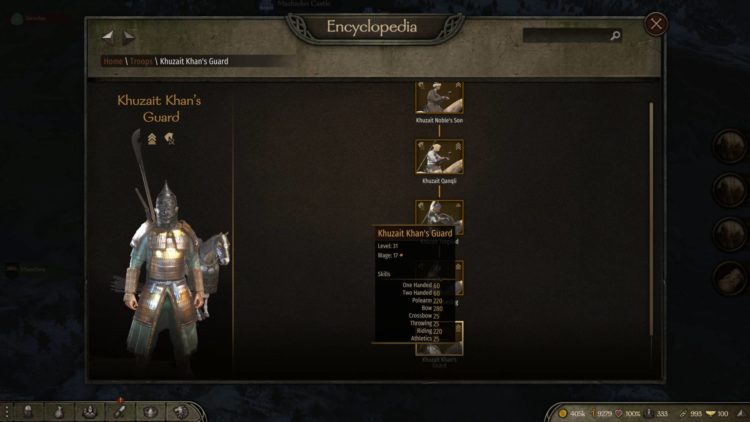 Minor factions such as the mercenaries in Mount & Blade II: Bannerlord also have their own unit trees. You’ll be able to get mercenary troops easily if you obtain a quest that requires you to find someone who’d recruit them.

Bandits, meanwhile, can even be upgraded into regular troops. But, that’s only if you have the “Disciplinarian” perk from the Leadership skill — this perk works now thanks to the latest hotfix (v. e1.0.6). There are also the Sword Sisters who, as far as I know, are the only female troops in the game: 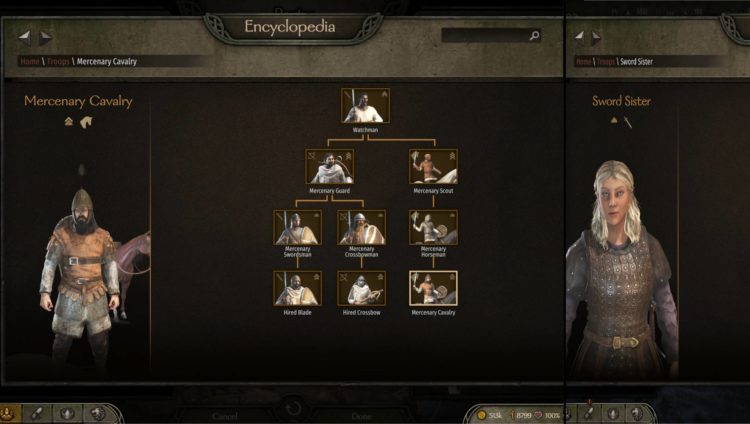 Recruiting from towns, your prisoners, and unit upgrades

Remember that the unit types for each town or village depend on who owned that settlement at the start of Mount & Blade II: Bannerlord‘s campaign. Here’s the early-game world map to give you a general idea: 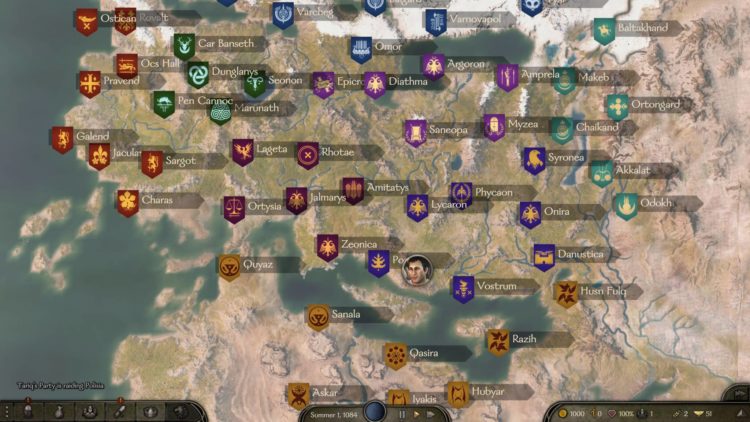 Anyway, to recruit stronger units, mouse over an NPC in the settlement and you’ll see their “power” — it might say “powerful” or “influential.” The key here is that “powerful” NPCs will usually have better troops available. If they don’t have it at the moment, check back at a later date until their recruit list refreshes.

Now, there may be times when higher-tier troops can’t be recruited since you need higher relations with the NPC. You can increase this via: 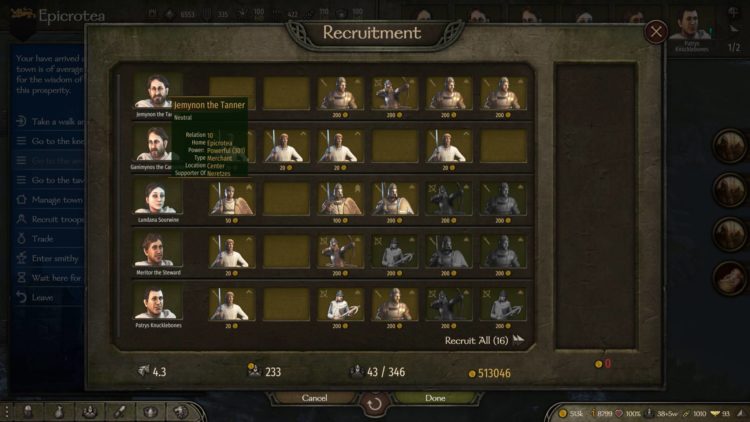 The other option is recruiting your prisoners. Towards Mount & Blade II: Bannerlord‘s mid to late-game progress, nobles will lead elite units that you can capture.

Have these prisoners in your party and make sure you’re within your party limit to prevent them from escaping. Continue playing or let time pass and you’ll see that some can be recruited. Unlike in previous Mount & Blade titles, only one or two will be available for recruitment at a time, not an entire batch. The goal is to focus on imprisoning higher-tier units so you can recruit them down the line. 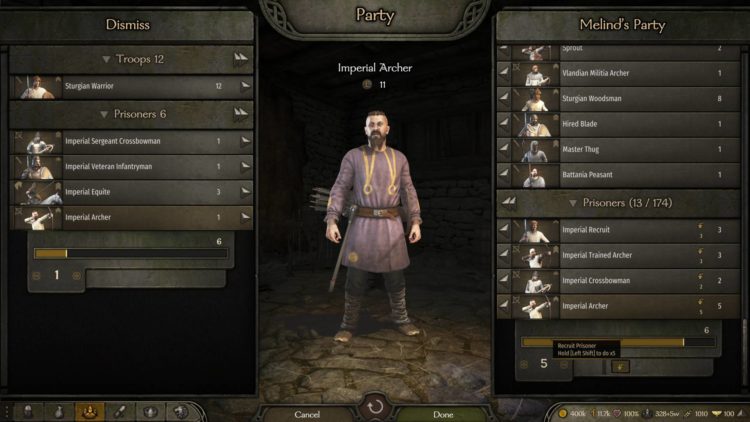 Concerning upgrades, you’ll be able to do this once your units have leveled up. Auto-resolving battles (ie. “send troops”) will help immensely in ensuring that they get a lot of kills too.

All units require gold to be upgraded. However, in the case of a few examples — such as the Imperial Bucellarii — you may need specific mounts such as war horses. As mentioned, bandit-type units can be upgraded into regular troops if you have the “Disciplinarian” perk (Leadership L125) and, at times, their upgrade paths will be shorter as well. 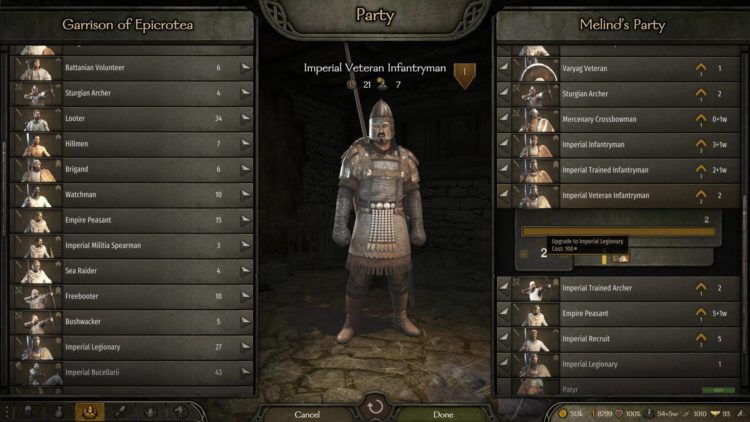 When it comes to most battlefield engagements, you’ll want decent frontline troops; even cheaper ones are viable since they can tie down enemy forces. Elite cavalry units, however, are extremely useful especially if you’re manually conducting flanking maneuvers. Lastly, having lots of crossbowmen can whittle down hostiles whenever you manually engage in siege battles.

In any case, it’s possible to play Mount & Blade II: Bannerlord by scrounging the lands to grab all the best units in your army, but it might be better to stick to a particular culture group’s units and upgrade them as you go. Later, you can add more advanced troops while you progress.

For instance, while I was a vassal of Vlandia, I mostly had Vlandian soldiers in my army. Once I formed my own kingdom to invade imperial lands, that’s when I started getting more Legionaries and Elite Cataphracts after recruiting my prisoners. 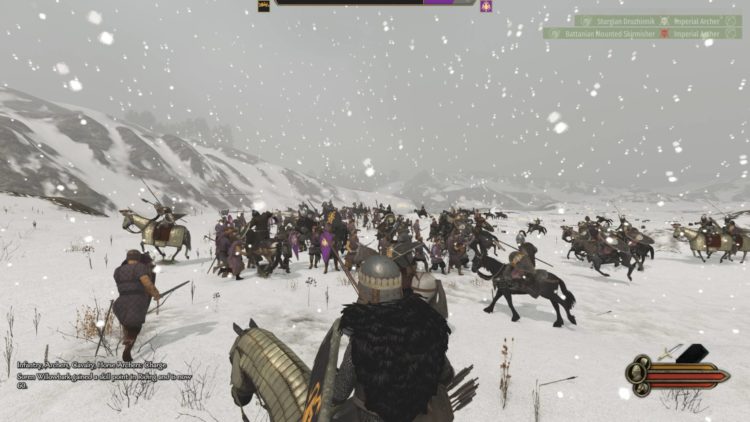 Mount & Blade II: Bannerlord – How to get married and have children