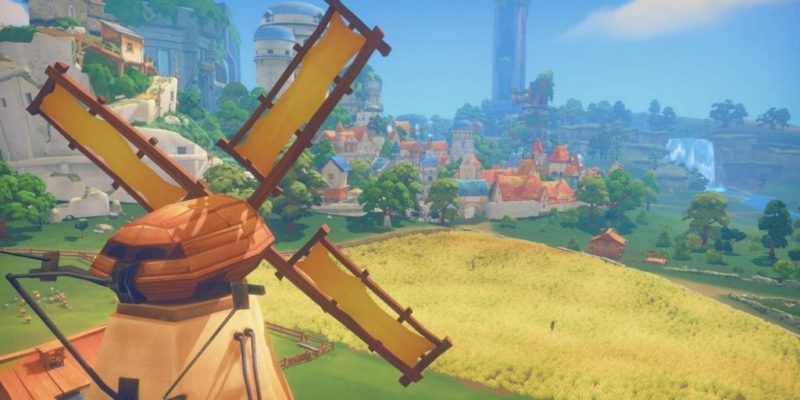 Contrary to popular opinion, when it’s summertime, the living ain’t easy. It’s too damn hot. And while long sunny days are great for barbeques and sipping brews, sometime’s the best way to beat the heat is to stay inside, play some games, and mellow out. Over the last few weeks, I’ve done just that. Don’t get me wrong; I love the great outdoors as much as the next person. But after getting hooked on My Time At Portia, I’m content to avoid the sun and spend my free time hanging with its digital community.

My Time At Portia is a charming slice of life sim. It’s not unlike Harvest Moon or Stardew Valley, but instead of spending your time farming, Portia focuses on crafting and carpentry. The game’s been available through Steam’s Early Access program for the better part of 2018. And while it’s far from finished, its current iteration has more than enough content to keep me hooked. 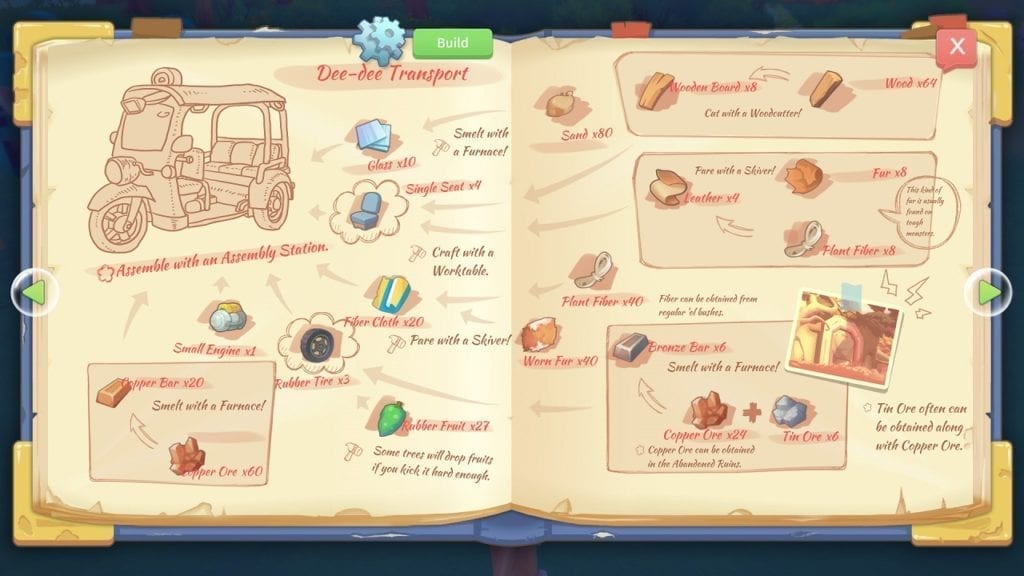 Crafting is a multi-step process.

There’s just so much to do. As the newest resident of an idyllic town called Portia, players begin the game by taking over their father’s long-abandoned workshop. He was a master Builder — the game’s catchall term for carpenters and crafters — and with the deed to his property in hand, your job is to carry on his legacy. At first, this means getting your feet wet with simple tasks. You’ll gather some stick and stones to make simple tools. But after a few in-game days, Portia‘s deceptively deep crafting system opens up. Within a week, I was working on larger projects like a three-piece bridge to connect mainland Portia to a nearby island.

Because it’s focused on crafting, My Time At Portia uses modular schematics. At any point, you can open up a list of diagrams and start working on a project. The object you’re making appears as a semi-transparent model, and you have to place individual components in their correct place manually. It’s overwhelming at first. Your crafting journal is full of detailed instructions and sub-steps. But the learning curve helps sell the game’s fiction. You didn’t come to Portia as an artisan; you fell into it. And stumbling your way to success is a big part of the fun.

But, if crafting’s not your speed, My Time At Portia has plenty of other diversions. The titular village is home to dozens of citizens, each with unique schedules, jobs, and personalities. You’re free to spend time chatting up your neighbors and exploring the surrounding countryside. Portia’s a big place. The town stretches up from a central plaza, with winding stairwells that grant access to different districts. Most of the village’s shops are on the ground level. Further up are medical facilities, the community’s religious center, and a guild of adventurers.

It’s in exploring Portia and the land that spills out from the town’s gates that My Time At Portia‘s 3D camera works wonders. By grounding the player’s perspective, there’s a genuine sense of scale that games like Stardew Valley are missing. Jogging from your home, for example, to the town’s scientific research center takes a few minutes. Instead of dashing from one screen to the next, moving through a seamless, mostly open world builds upon the game’s endearing sense of community. You’ll see townsfolk running around, as you go about your business. Portia’s a lively place. 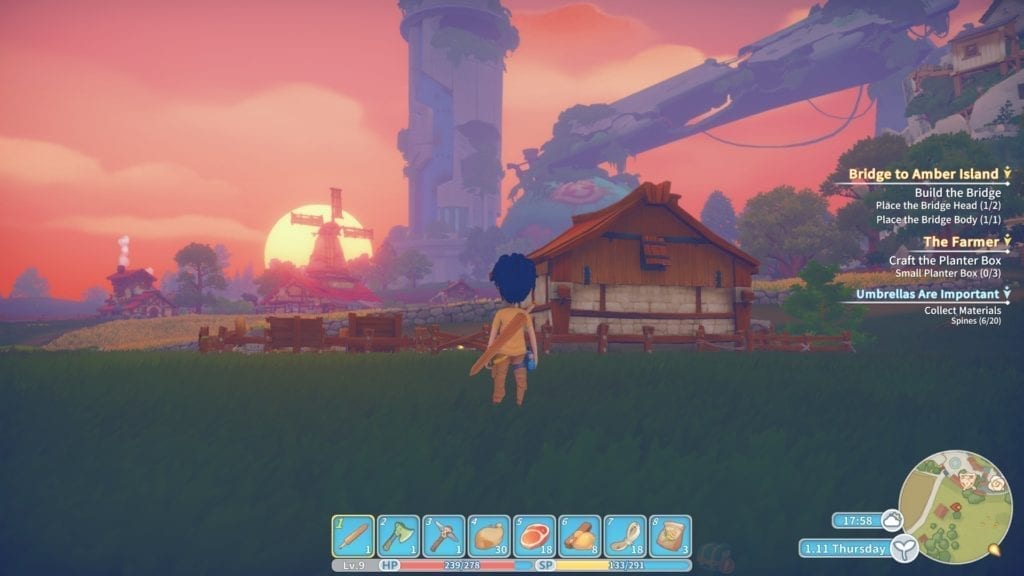 Crafting and hanging around town are just the tip of My Time At Portia‘s gameplay offerings. Mining is a significant part of your resource-hunting loop. Abandoned ruins loom on Portia’s horizon. They’re remnants of a bygone era, one when people knelt at the altar of technology and lost their connection with the natural world. Whatever beauty they once held is long gone, however. Instead, the ruins are now sweeping chambers of rock and rubble. Residents of Portia can pay a small fee for weekly access to the ruins. Purchasing the pass gives players access to a jetpack (!!) and scanner goggles, which can detect relics deep underground.

During the mining sections, you’re free to pursue relics or hack away at the cavern to gather minerals. Each pickaxe swing leaves a permanent impact on the ruin. Scars and pockets of tapped passages mark your progress through the environment. Sometimes you’ll uncover data discs and other discarded pieces of technology. The discs contain old-world information. Both Portia’s church members and scientists want the CDS — the former as a means of purging the data while the latter as a means of relearning forgotten secrets. The rivalry between both factions plays out through small pockets of dialogue, perhaps pointing to an overarching theme of tech’s role in an agrarian world. 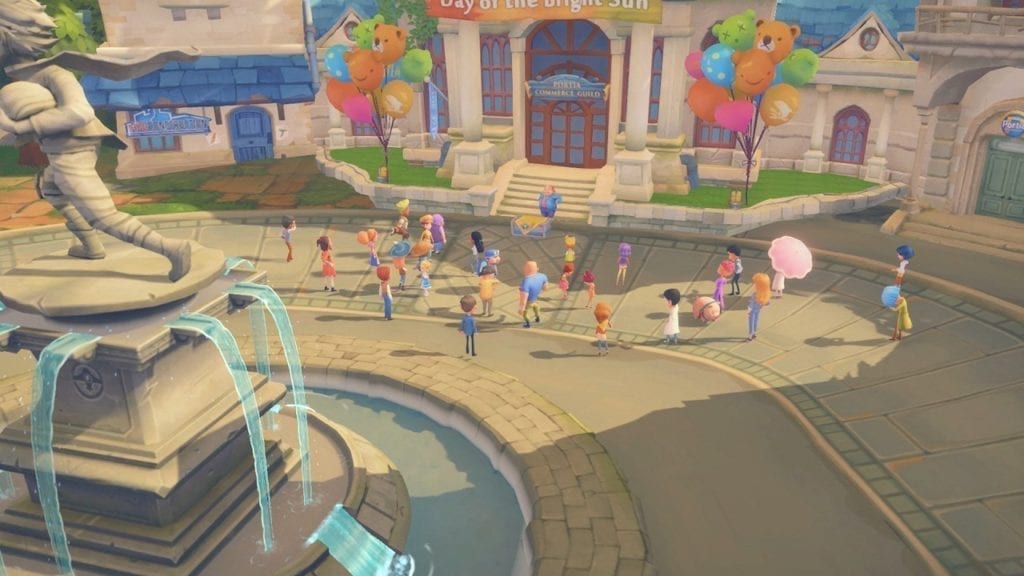 There are plenty of villagers to befriend, too.

My Time At Portia has dungeons, too. After a set number of in-game days, a new part of the map unlocks, offering players a chance to hone their combat skills on aggressive monsters. If they’re feeling adventurous, players can attempt to complete multi-floored dungeon crawls. In its current form, combat’s lacking but is still manageable. Each floor has a handful of enemies that, when killed, grant access to another chamber. At the end of the level is a boss. I haven’t toppled the first significant boss yet. Your stamina pool dictates your ability to fight. And since every action — like swinging a sword or mining a rock node — chips away at the pool. To succeed, you’ll need to bring health and stamina-restoring snacks.

It’s easy to lose a few hours to My Time At Portia every time you launch the game. There’s always something to do. In addition to the more action-minded activities, players can raise animals, try their hand at some light farming, or pass the day fishing. The game isn’t hurting for content, and developer Pathea Games is continually adding new features. Portia’s buzz of daily life, though digital, does an excellent job of making you feel like part of a community.

This isn’t to say that Portia is a perfect town. Although most, if not all, of its residents have voiced dialogue, you’d be wise to silence the NPCs. In the game’s current form, the vocal performances are grating and notably low-quality. Other audio issues pop up from time to time, like missing sound effects during combat or mining. But given the fact that My Time At Portia does everything else so well, it’s easy to ignore a few faulty sounds in an early access title.

My Time At Portia is quickly becoming my go-to game. It’s crafting is complicated enough to keep me engaged and focused on long-term projects, but its whimsical world is perfect for mellow sessions. Something tells me I’ll be ditching the sun to kick it with some villagers for the next few months. I still feel like I haven’t even scratched the surface.