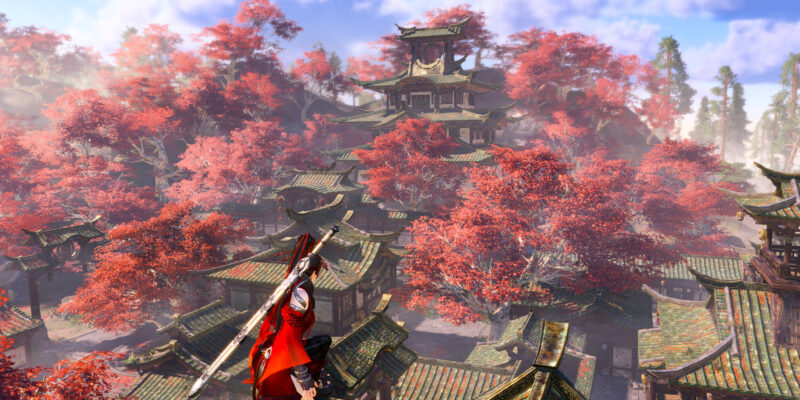 Naraka: Bladepoint is a refreshing change from the gun-wielding battle royales. Instead of shooting enemies, you wield an arsenal of blades and use ninja-like characters with special abilities. You can shoot people too if you like. But fights are won and lost with the blade. Let’s review what’s sharp, dull, and truly magical about Naraka: Bladepoint.

You begin your journey to blade master with a tutorial that teaches you the basics of combat. There’s a little bit of a story that plays out, but Naraka: Bladepoint is really all about the battles. During the introduction, you’re taught the three basic combat actions: common attacks, focus strikes, and counterstrikes. You’re also shown how to scale just about anything, dodge attacks, and use the grappling hook to perform incredible aerial feats.

On top of that, the tutorial teaches you about the magical combat moves you can call on to give yourself an edge in a fight. You’re also shown how to shoot a bow. But, as I mentioned, it quickly becomes obvious that ranged weapons won’t win you battles in Naraka: Bladepoint.

Movement in this game is fluid and intuitive. You can get from the ground to a rooftop in a matter of seconds. With a grappling hook, a second is all you need. Just roaming the map and scaling buildings is very fun. It reminds me of Assassin’s Creed, but with more agility and flexibility.

The basics of Naraka: Bladepoint are simple to grasp. To start, you can choose between trios and solo mode. The battle royale consists of 60 players loading into a mythical island to fight it out until one team or player is left standing. The game does a good job of easing you into the battle royale mode by loading your first couple of games with bots. This gives you a gentle way to get familiar with looting, learn the various map mechanics, and practice some fighting.

The first time you encounter a decent player, though, you’ll learn that the basics aren’t going to cut it. The combat and movement of Naraka: Bladepoint have a lot of depth. There are plenty of tricks you can use to move faster, heal quicker, and outwit your foes in blade-to-blade combat. You can dodge to the side to avoid vertical attacks, jump over horizontal slashes, and parry focus strikes. I won’t get into all the combat interactions, but suffice to say, there’s a way to counter almost everything. And that’s what makes Naraka: Bladepoint so appealing.

The skill ceiling is high — misty mountaintop high. You need to absorb a lot of information if you want to master combat in Naraka: Bladepoint. There are currently seven heroes, six melee weapons, and six ranged weapons you need to learn. I say learn because the only way to consistently defeat foes you encounter is to identify their hero and weapons before engaging. All the characters and weapons feel very different to use, particularly the melee weapons.  Each melee weapon has a few combos it can perform, as well as a range of focus strikes. If you know what attacks are coming, you’re in a good position to counter them.

A land of mystery and beauty

Thankfully, Naraka: Bladepoint doesn’t just throw you into the battle royale mode and expect you to survive. You can also try your hand at The Bloodbath. This is a deathmatch-style mode that lets you fight and die over and over again. It’s perfect for learning how heroes and weapons work. I’d highly recommend giving it a go before hopping into the battle royale.

If, like me, you’re a fan of Asian landscapes and mythology, you’re going to love Naraka: Bladepoint’s aesthetic. The island of Morus is beautiful and features a range of terrains. And the lighting 24 Entertainment has created makes you want to forget about the battle raging around you and just enjoy the scenery. 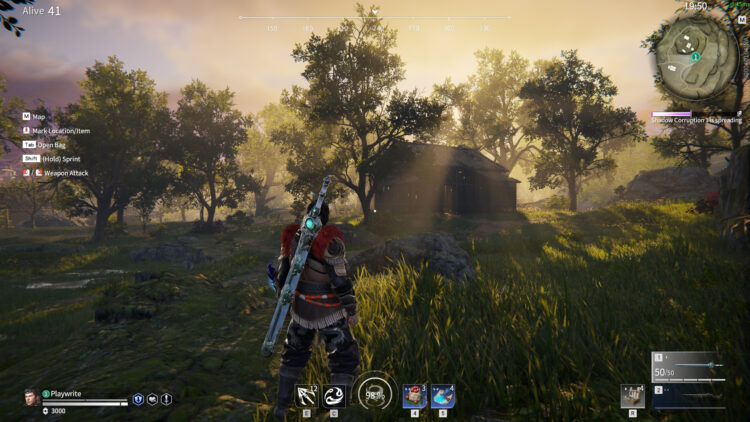 There are open fields, rocky mountainous zones, a picturesque temple, and a lavish palace to name just a few. Each area feels unique but also forces you to approach your fights differently. For instance, there’s no easy way to flee your opponent in an open field. However, if you’re on a cliffside or in the palace, you can use the verticality to break line of sight to heal or make a dash for cover.

There are also secrets scattered throughout the map that reward players dedicated enough to unearth them. There are hidden rooms loaded with money and loot, chests with legendary weapons, and a pre-game treasure hunt that can reward you with Tae (the in-game currency) or Spectral Silk (the cosmetic crafting material).

My biggest issue with Naraka: Bladepoint has persisted since the beta. Occasionally, for no explicable reason, your game will stutter. If you’re in the middle of a fight, this could get you killed. If you’re looting, it’s just annoying. The developer should focus on fixing this issue. If it doesn’t, it’s going to cost the game players.

Your journey is not without reward

Naraka: Bladepoint’s in-game rewards system is very satisfying. There are numerous ways to earn cosmetics and progress your account. You can level up characters to unlock ability modifiers and treasures. The more you use a weapon the more Weapon Proficiency you will get with it, which rewards you with Tae and cosmetics for the weapon you upgrade. These two systems encourage and reward you for sampling multiple heroes and weapons, which is ideal for learning the game.

You can also complete quests and challenges to earn more Tae, which you can use to purchase cosmetics and empower your Glyphs. I haven’t really touched on Glyphs at all, but all you need to know is that they allow you to empower your heroes in slightly different ways.

As you play, you will also earn the crafting currency, Spectral Silk. You can use this to craft numerous cosmetics, which range from cheap and common to very pricey and detailed. There’s also a battle pass, which throws rewards at you. It’s wonderful. 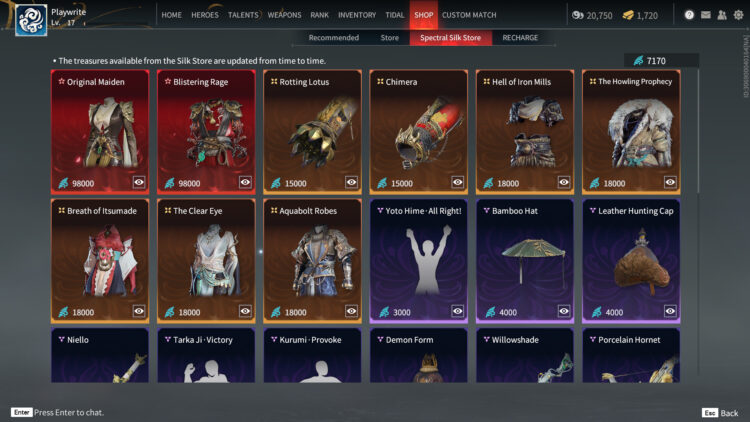 Of course, you can also spend real-world money in the game to unlock cosmetics. And some of them are gorgeous. However, you will get along just fine without spending a cent after you make the initial purchase to acquire the game. Speaking of, I think Naraka: Bladepoint not being a free-to-play title will hold it back from greatness. Many players won’t be willing to gamble on the price to see if they enjoy the game. This is a shame because I think many people who would love it will never play it.

Naraka: Bladepoint is an excellent battle royale game. 24 Entertainment has done a brilliant job making melee combat engaging, tactical, and rewarding to master. And it will take you many, many hours to master. That’s what you want from a repetitive genre like battle royale. You want to feel like you’re constantly improving and that there is always something more for you to learn.

As I mentioned, traversing the map like a ninja is blissful. Defeating an opponent in a one-on-one fight will make you feel like you truly accomplished something. I love that there are advanced mechanics for you to discover and practice to improve even further, like animation canceling to speed up healing and looting and tech chasing, a trick that allows you to strike an enemy as they’re recovering from being knocked down.

However, there are a few situations where the gameplay feels awkward. If you’re stuck in a corner for instance. The camera can’t really deal with what’s going on and you end up staring at a wall. That might be more my fault than the game’s fault, though. The gameplay systems are mostly neat and tidy. I found the need to constantly repair my weapons annoying, and I don’t see what value it adds. They could remove this and simply make you reload ranged weapons.

If you enjoy Dark Souls or Sekrio: Shadows Shadows Die Twice style swordplay, you’ll enjoy the punishing, but rewarding combat of Naraka: Bladepoint. With the parkour movement and magical abilities thrown into the mix, this battle royale is a seriously strong contender for your time and energy. Every time I lose a fight, I find myself even more eager to hop back in and try again.

If you’re just getting into Naraka: Bladepoint, I’ve got a beginner’s guide packed with tips and tricks to help you find your feet and improve. 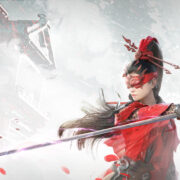 Naraka: Bladepoint's movement and combat are beautifully fluid, and they give the battle royale more depth than any other. You will sink endless hours into soaring through above buildings and dueling with enemy ninjas. It only has a few minor technical issues that are bringing it down. If fixed, Naraka: Bladepoint will be around for a long, long time.

Pinhead from Hellraiser is coming to Dead By Daylight