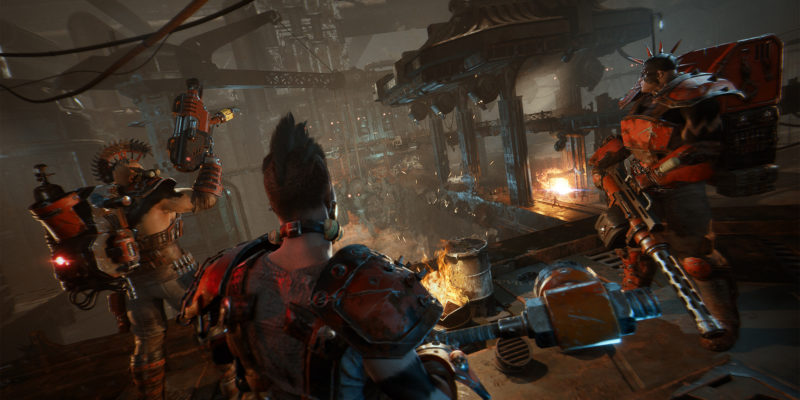 When creating your own custom gang and characters in Necromunda: Underhive Wars, you’re given the option of choosing from five different classes. Here’s our character creation and class guide to help you out.

Note: For more information about Necromunda: Underhive Wars, you can check out our guides and features hub. 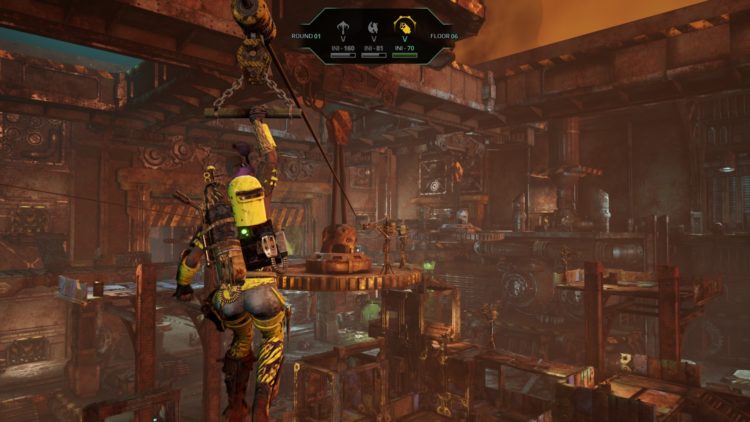 Many of the concepts have already been discussed in our previous Necromunda: Underhive Wars gang creation and houses guide. Moving forward, it’s time for us to take a look at the custom characters and their classes. Bear in mind that the five pre-determined classes in the game — Deadeye, Brawler, Heavy, Saboteur, and Lay-Mechanic — will still be available regardless of the house you chose, though there are some slight differences due to the stat boosts you receive.

Note: You can select pre-made characters for your gang or you can start from scratch. If you pick the latter, you can recruit fighters of varying ranks/levels (the higher the level, the higher the cost in credits). 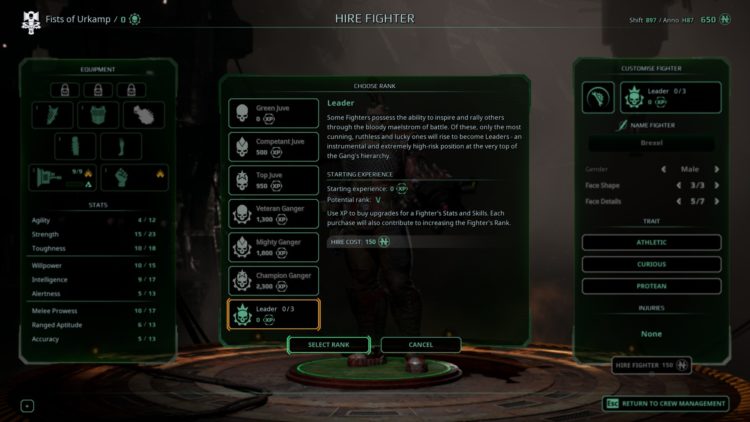 Before you can create the rest of your squad, you’ll first need to create a leader. The leader is a special type of character in Necromunda: Underhive Wars, one who has access to multiple squad-based skills. Remember that each squad you form in your gang requires a leader.

Examples of skills include Heroic: Rally (removes all debuffs for all allies within range; increases stun and stress resistance), Heroic: Call to Arms (increases critical hit resistance of all allies within range), and Lead Through Pain (a self-buff that increases your defenses and evasion if the leader is gravely wounded). Don’t worry because leaders can still choose from any of the five classes.

One particular leader skill remained helpful as I continued to play various operations/missions. It’s Heroic: Barrage (attack thrice with your weapon; can select up to three targets; +25% ranged penetration; can be used once per turn). My chosen leader was a Deadeye (similar to Tessera in Necromunda: Underhive Wars‘ campaign), so Heroic: Barrage combined with the Deadeye class’ penchant for ranged combat boosts meant I could snipe and drop one hostile each turn provided that all three shots land.

Note: You’ll be able to promote other units to have the leader designation and access to leader skills as long as they’re level 5 or higher. You’re also allowed up to three leaders in your entire gang. However, only one is allowed in your main “crew” at any given time. This means that you could start with a Deadeye leader and, much later, promote a Heavy leader or Brawler leader if you want to experiment. However, you’ll need to place your previous leader on the reserve team (right-click on a character and pick Res1 or Res2). 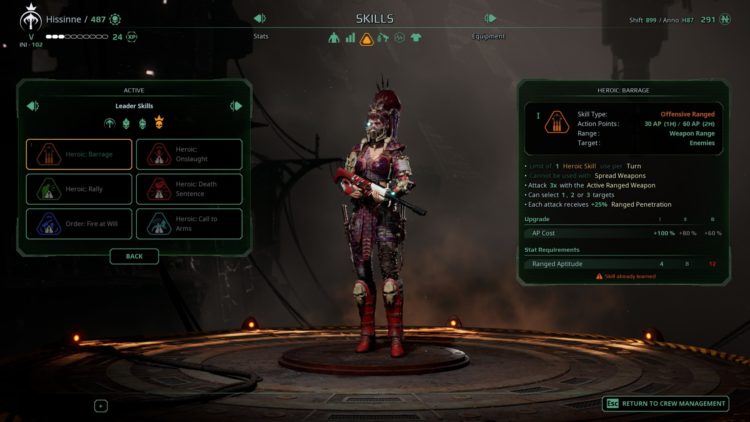 Next, you’ll need to take a look at the traits of your created characters. There are three groupings with multiple options, though you can only select one from each grouping:

From the get-go, you’ll realize that traits will greatly determine how you build your characters in Necromunda: Underhive Wars. Here are some examples:

Note 1: I’ve mostly avoided toughness as an attribute due to its effects (increased healing and defense against crits). These effects are, in my opinion, not as useful as the other defensive-oriented stats in Necromunda: Underhive Wars.

Note 2: As you complete the operations/sandbox mode in Necromunda: Underhive Wars, characters will start developing a virtue, vice, and talent (roughly anywhere past level 5). These are buffs (or debuffs) that are specific to a character. However, I’m not exactly sure what influences the particular perk. For instance, my Heavy character had “Lucky Striker” (a critical hit for the first melee attack in a battle) even though it never attacked via melee before. 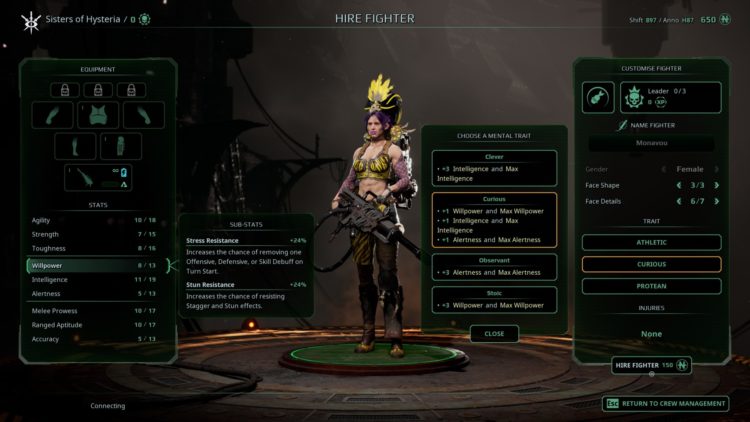 Ideally, Deadeyes in Necromunda: Underhive Wars should have the highest ranged aptitude, accuracy, and intelligence stats. After all, even if a character is rarely getting close to other foes, it’s next to useless if they’re a clumsy marksman.

Here are some active skills and passives you can pick up: 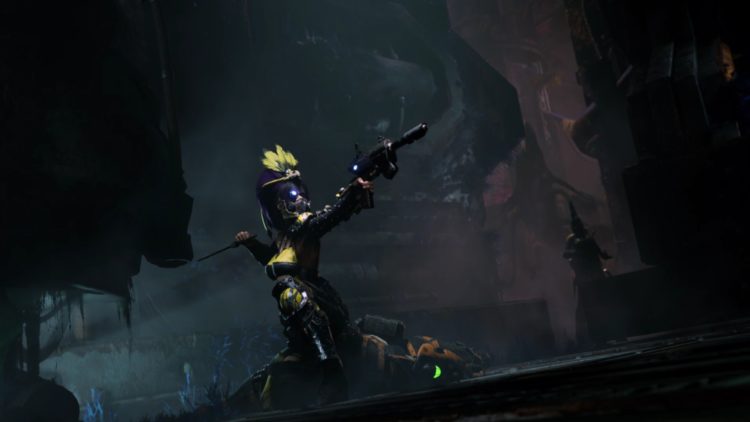 The Heavy class is actually decent to have in Necromunda: Underhive Wars due to its capabilities. Just remember that the autocannon can be quite atrocious in terms of accuracy, so make sure that you’re boosting that stat as well as ranged aptitude. One more thing: the Heavy class is restricted to having either the Resilient or Athletic physical traits.

Anyway, some skills you can obtain include: 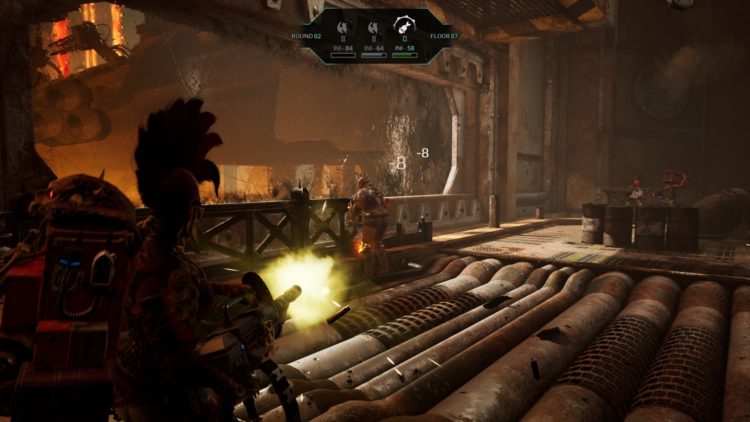 I find that the Lay-Mechanic class can be beneficial in a few cases during your Necromunda: Underhive Wars missions. Sure, they’re sort of a hybrid class in that they have their Rivet Cannon (medium-range weapon) while equipping another weapon in their other hand. At the same time, I have them scurrying around early in a mission to repair ziplines and drop a health dispenser. These objects allow me to have improved control over the battlefield, though the utility itself won be on the same level as pure, raw damage output from other classes.

Here are some skills you can pick up: 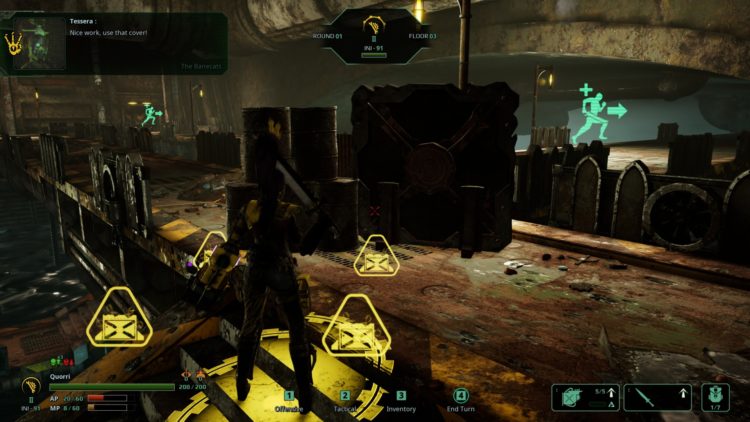 Think of the Saboteur class as that annoying fella in Necromunda: Underhive Wars that’ll just create obstacles on the map thanks to hazard zones and various traps. Unfortunately, the Flamer is a pitifully weak weapon. Still, I found the most use out of this class thanks to one of its skills — the Homemade ‘Nade — which makes it a grenade-lobbing machine.

Here are some skills you can grab: 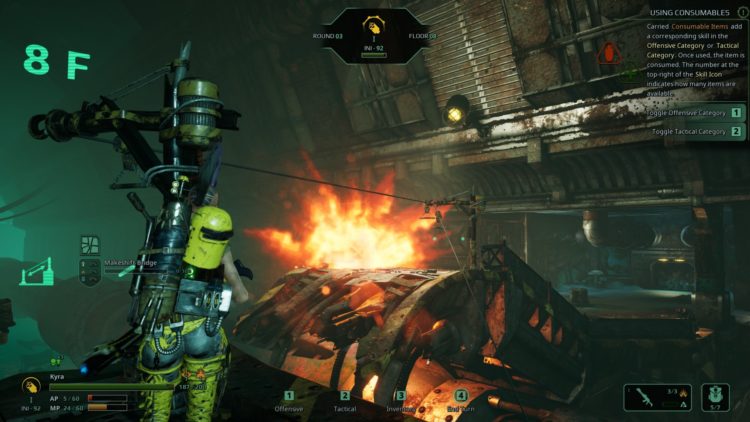 Brawlers are a bit iffy to use at times in Necromunda: Underhive Wars. Due to the way the combat flows. Considering all the mechanics involved, getting into the thick of the fray can be very risky. You’ll need to pump up several stats such as agility and willpower (defensive), as well as strength and melee prowess (offensive). Alertness might even be important since it increases your initiative (you can take your turn before your opponents do) and resistance to hits (so you’ll only receive a grazing blow instead of an actual hit). Toughness is probably a pass. As mentioned earlier, it doesn’t do anything beyond boosting healing effects and your defense against crits; you’re better off with the evasion from agility.

Here are some skills you can obtain: 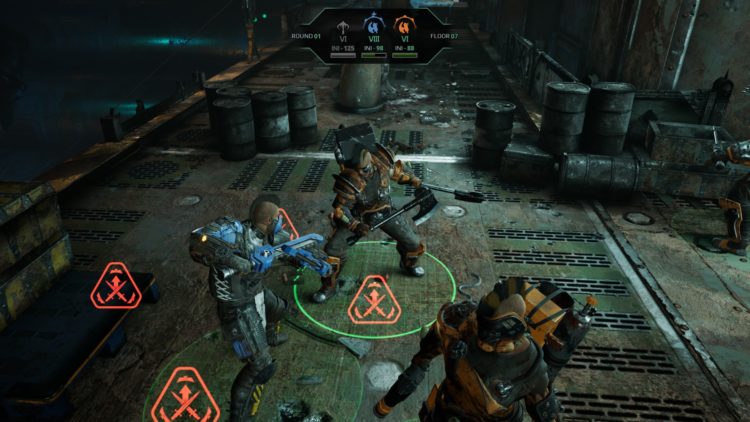 Next up, let’s take a look at the operations and missions in Necromunda: Underhive Wars.

Necromunda: Underhive Wars is available via Steam. For more information, check out our guides and features hub.