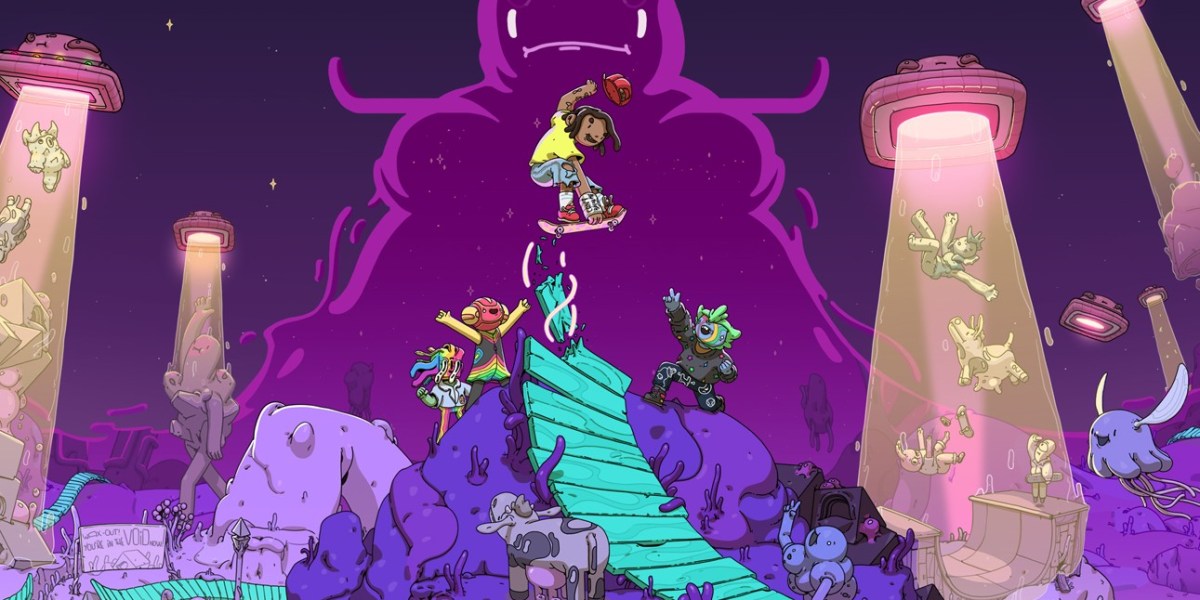 Of all the games that have come out in 2022 so far, OlliOlli World was among the best. Its inviting cartoon art style masked an extremely complex, challenging game that demanded players to use all the tools given to them. Because of this deceptively high skill ceiling, as well as the expertly crafted level design, nailing that perfect run never stopped feeling satisfying. It helped that the game boasted a surprising amount of levels and side content, although this may not have prevented some players from feeling hungry for more. Fortunately, developer Roll7 plans to release the first DLC expansion for OlliOlli World, dubbed VOID Riders, on June 15. Players will soon have a major incentive to return to Radlandia.

The premise of this new expansion sees a trio of radical extraterrestrials named Sair’Rah, Khehvyn, and Pftangxi coming to Radlandia to find “skater specimens for the mighty Nebulord.” To impress these unexpected visitors, players will need to skate across all-new levels that take place in the same regions as the base game, albeit with new visual makeovers. If players perform well enough, they can travel to the aliens’ home planet VOID, where presumably even more challenges await.

The new trailer for VOID Riders specifically highlights the tractor beams that appear in the new levels. Not only do they alter the stage layouts in dynamic ways, but they also give some extra lift to players’ jumps, allowing them to perform even crazier tricks than before. Additionally, the expansion comes with a whole host of new space-themed cosmetic items that can be unlocked for the player avatar.

Notably, Roll7 has labeled VOID Riders as the first of two expansions for OlliOlli World, with the second one arriving sometime in late 2022. The base game already features insanely creative level designs, so one can only wonder what these new expansions will bring to the table.

RPG roguelike For The King is getting a sequel in 2023