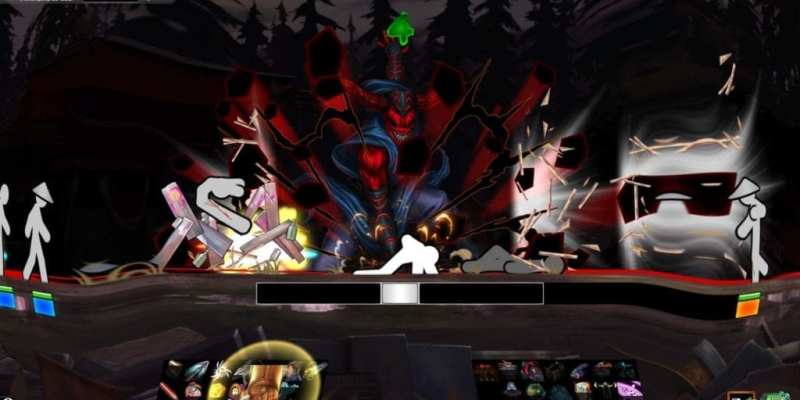 If there’s one thing to be said about One Finger Death Punch 2, it’s that its fast-paced action is loaded with paradoxes. With no story, easy to learn two-button controls, and paper cut-out stick figure characters, the game is the pinnacle of minimalism. The game even states that it was designed with short gameplay sessions in mind, with levels that roughly five to ten minutes each, and that’s where the paradox lies. Amid the minimalism is an explosion of fast-paced graphics and gorgeous background images coupled with gameplay that will test even the most skilled players. Eventually, those “short” gameplay sessions turn into marathons that only stops when your hands and wrists grow too tired to continue.

The game’s concept is deceptively simple. A variety of enemies will attack from the left or right of the screen, with some being tougher or trickier than others. Some will fire or throw projectiles from the edges. All you have to do is defeat the oncoming hordes and deflect projectiles by pressing the corresponding buttons as foes enter your strike zone. The key is to not lose control and “miss” with a button press that doesn’t hit anything, which leaves you vulnerable to attack. 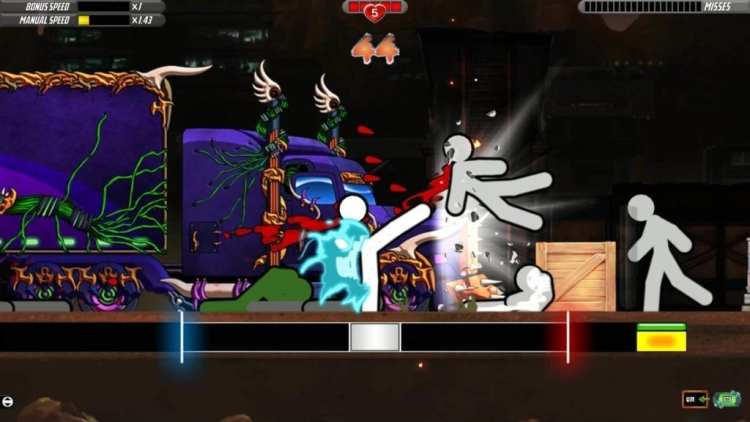 There’s a lot more to these graphics than stick figures.

Enemy numbers grow along with the speed as you progress until your fighter is swimming in bright colors and utter chaos. Fortunately, there are 26 skills that can be leveled up to aid players in their quest to plow through hordes of minions. They include regaining health, clearing enemies from the screen, getting a laser sword, and more. Earning gems to upgrade them allows them to recharge faster. Up to three gems can be placed into each skill and they can be rearranged without penalty.

Soon, you’ll be tearing enemies apart by the hundreds as they rush at you. Meanwhile, you’re constantly trying to keep pace with the action. The experience, combined with the thumping soundtrack, is nothing short of mesmerizing. There are also challenge missions help break up the action by offering special twists. For instance, one zone features levels where you can’t see your character or the strike zone indicators. Others will have different criteria like only fighting off projectiles or requiring a perfect game. Not all of them will appeal to everyone, but there’s enough variety to keep the game interesting.

The extensive campaign never feels repetitive, which is an incredible feat given how you’re essentially doing the same things in every mission. Then there are the three survival modes, which extends the gameplay near indefinitely. All things considered, One Finger Death Punch 2 offers way more content than one might expect from a two-button stick figure fighting game.

I found surprisingly few quirks with the gameplay. My main problems with the game are that sometimes is that the game will sometimes break its own pace. For instance, the strike zone bars will grow if you’re on a roll, but will shorten on one side if there’s a break in the line. I also had some trouble discerning between characters were still attacking and those that were slowly bleeding out when the action became intense, especially when projectiles were being thrown around. This led me to keep my eyes trained solely on the strike zone bars for most of the time instead of on the action, which isn’t terrible, but I would have much rather watched my fighter kick ass. 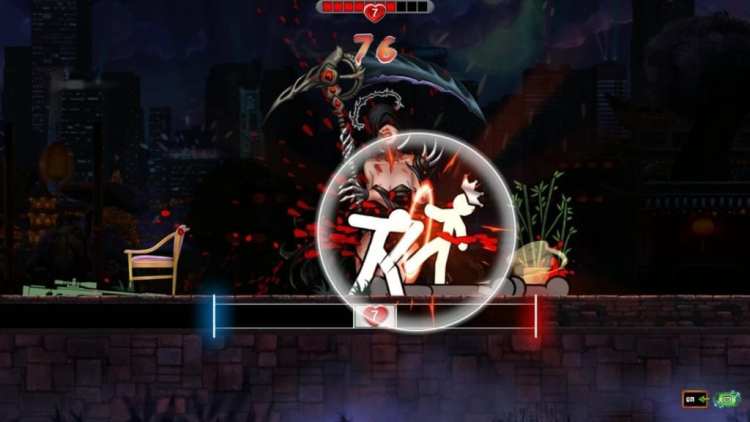 Instantly killing a boss that’s near death wastes the skill, but at least it’s in style.

Perhaps my biggest issue is with how some of the skills work. Other than striking, players have little control over when skills activate, and they tend to go off soon after they’re charged. That means my “instantly kill a boss” skill may trigger while I’m already engaged in a fight with one, even when it’s practically defeated anyway. Or a skill to clear all enemies in sight will go off right after a similar one does, killing only a handful of enemies instead of waiting for the screen to fill up again. The issue also highlights how a handful of the skills are essentially repeats of each other.

Then there’s the skill that temporarily extends the strike zones before shrinking them back down again without much warning. Also, short one-minute matches may finish without skills like the shield ever fully charging. None of that ruins the experience, but I do wish there was some way to adjust the settings for some of these skills so they can be timed better.

The campaign also concludes suddenly with an ambiguous pencil drawing animation and sad music that I think illustrates the dedication Silver Dollar Games put into developing One Finger Death Punch 2. Or maybe it encourages players to take a break from their computers. It’s a strange ending to a game that has you delivering death to thousands of stick figures at hyper-fast speeds, and it borders on a being bit of a downer. Again, it doesn’t ruin the experience, and the developers certainly deserve recognition for putting together such an impressive game. It’s just an odd note to finish the game’s campaign on.

Another big highlight in One Finger Death Punch 2 is the new couch co-op tag-team mode. In it, players can swap out with each other in a survival game. The trick is, each player only has three life points that quickly regenerates when they’re tagged out except when they’re dead. 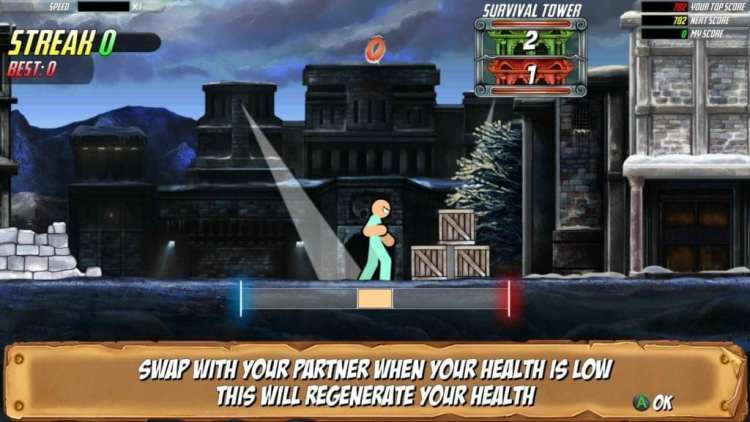 The waves are incredibly challenging, even when starting out, so players can expect to swap out often unless one of them is exceptionally good. Players can also tag out at any time, even when engaged in a boss battle, without any warning. So, it’s up to players to communicate with each other and decide when to strategically jump out of the game or else their teammate is going to get hit.

Although there is no online play, the cooperative feature adds a whole new layer of gameplay. It somehow makes the game even more challenging than the single player because you have to coordinate with a friend amid all the crazy action. It works well even when new and experienced players tag team with each other, which is a testament to how easy the game is pick up and learn. 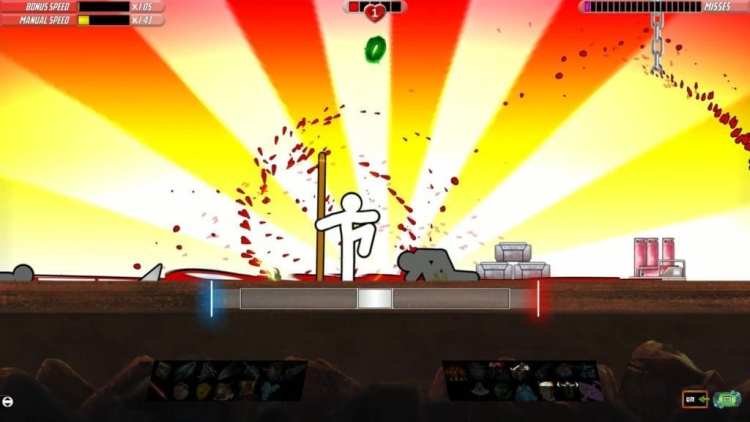 Although the concept is simple and straightforward, One Finger Death Punch 2 is the near-perfect gaming experience. It’s the kind of game that gets under your skin and has you saying, “just one more level” before falling into hours of playing.

The Walking Dead’s Definitive Package Has Loads Of Collectors’ Goodies