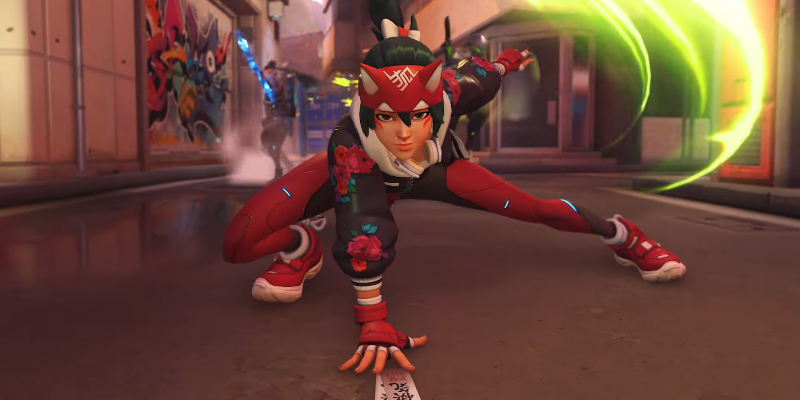 Blizzard has revealed Overwatch 2‘s next new hero, Kiriko. She was first leaked earlier this week from multiple sources, and it looks like those sources were reliable. The official reveal trailer dropped today showcasing Kiriko’s design, abilities, and a little of her backstory.

Kiriko is a Japanese hero tasked with protecting her home city. Her family relied on traditional methods to protect those around them and to make everyone feel safe. Kiriko continues down that path, but is the first in her family to turn to new technologies to get the job done. She blends traditional values with modern technology and she’s all the stronger for it.

What abilities Kiriko is bringing to your team

Based on the trailer, Kiriko appears to be a new utility-focused support hero for Overwatch 2. She can heal through her Healing Ofuda talismans but the majority of her kit is utility and damage based. She deals damage with her kunai knives, which are especially devastating on critical hits. Perhaps her strongest ability is Protection Suzu. Upon impact, allies hit by this become briefly invulnerable and are cleansed of most negative effects.

She’s not lacking in ways to get around, either. Much like Genji and Hanzo, Kiriko has the Wall Climb passive letting her scale vertical surfaces with ease. As for horizontal movement, she can rely on Swift Step, an ability that lets her teleport directly to a selected ally. Its functionality is similar to Mercy’s Guardian Angel although there is one big difference. Unlike Guardian Angel, Swift Step can be used to teleport through walls.

She’s free for some

When Kiriko was first leaked, a lot of Overwatch 2 fans were concerned about the game’s business model. As previously leaked, heroes were to be locked behind the Battle Pass. New heroes could be unlocked right away, but they could be unlocked after reaching a specific tier on the free track. However, you can unlock Kiriko straight away if you own the original Overwatch and play once during the first season of Overwatch 2.

Those who didn’t play the original game and want to unlock her faster will have to purchase the premium Season One Battle Pass. The pass will cost 1,000 Overwatch Coins, which is roughly $10 USD. Along with the new hero, you’ll also get XP boosts, skins, intros, weapon charms, emotes, and other cosmetics. Blizzard has offered more details at the Overwatch website.