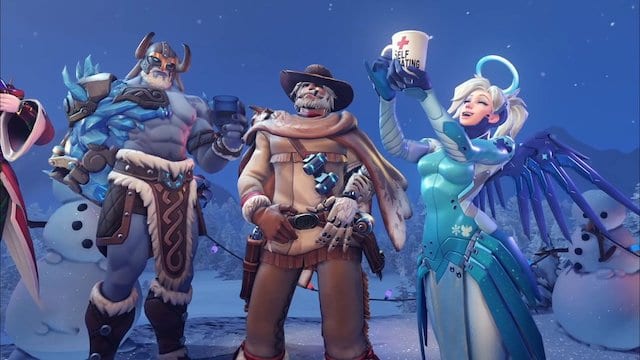 ‘Tis the season to get your friends together for an online skirmish and unlock some sweet new character skins in Overwatch. Er, that’s the way that the song goes, right? If not, don’t sweat it, because you’ll be too busy teaming up with others and winning match-ups. The Overwatch Winter Wonderland event is officially underway, taking place through January 2.

What does this year’s Winter Wonderland bring?

This event has gone strong for some time now, and, based on the trailer, this year’s looks to be just as fun as ever. Gamers will be able to indulge in a new mode called Snowball Deathmatch, which supports up to eight players. It features various Mei characters as they attempt to “catch” enemy snowballs while pelting them with their own. The first one to 15 eliminations will take the match for themselves.

In addition, there’s a slew of new skins available for each week. This first week, for instance, will debut a new ugly sweater for Soldier: 76. In subsequent weeks, players can get a Holly Moira, as well as a Snow Angel Mercy. There are also new legendary skins for the likes of Doomfist, McCree, Reaper, and Sigma, all delivering more of that holiday spirit.

Again, the Overwatch Winter Wonderland event takes place through January 2, so you’ve got more than enough time to collect the skins and throw a few snowballs. The update should automatically prompt the next time you start the game, so you won’t miss any holiday shenanigans. Expect plenty of holiday goodies from loot boxes and weekly challenges as well, so you can stock up.

Check out the trailer below, and remember — you’re just as highly effective a soldier in an ugly sweater as you are in armor. Never mind their laughing; you’ve got a victory to acquire!

If you don’t already have Overwatch, and you can get it over on Battle.net.