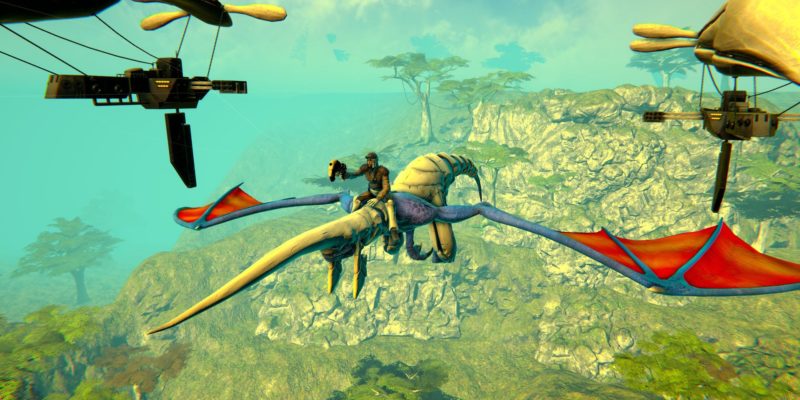 Panzer Dragoon is a classic rail-shooter series from the ’90s that definitely caught the imagination of many young gamers. When it released, it featured a variety of themed levels from tropical paradises to subterranean labyrinths and tasked players with hunting down and defeating a Prototype Dragon. Of course there were plenty of other hostiles to contend with, and it certainly put shooting skills to the test. The game managed to draw enough fanfare over the years to eventually justify a remake, and it’s back at last. Thanks to MegaPixel Studio, the Panzer Dragoon: Remake will arrive to PC and release on September 25.

The original game launched in 1996 on the Sega Saturn and obviously featured some pretty retro graphics by today’s standards. The remake provides a modern take on the visuals and seeks to improve the controls as well. It definitely still retains an old-school feel though. The soundtrack alone should definitely trigger some nostalgia. If it doesn’t, the epic sand worm battle should.

The combat throws enemies at you from all sides and naturally gets harder the further you progress. It’s not exactly revolutionary stuff in 2020, but it was fun for its time and was fairly adventure oriented anyways. There’s plenty of variety though, and you should feel entertained as you fight to fulfill the prophecy and defeat the Prototype Dragon.

Modernity for a blast from the past

On a side note, the system specifications might surprise you. While this is an old game at heart, the modern graphics demand a notable level of performance. The developer calls for no less than an Intel Core i5-2200, 4 GB of system RAM, and a Nvidia GTX 970 or AMD Radeon R9 290. Make sure you have 7-9 GB of hard disk space, too.

We’re still waiting for word on pricing, but we do know Panzer Dragoon: Remake will release on both Steam and GOG and include achievements. Furthermore, you will be able to play it on controller. For that full nostalgic experience, grab a modern Saturn gamepad for PC and get blasting.