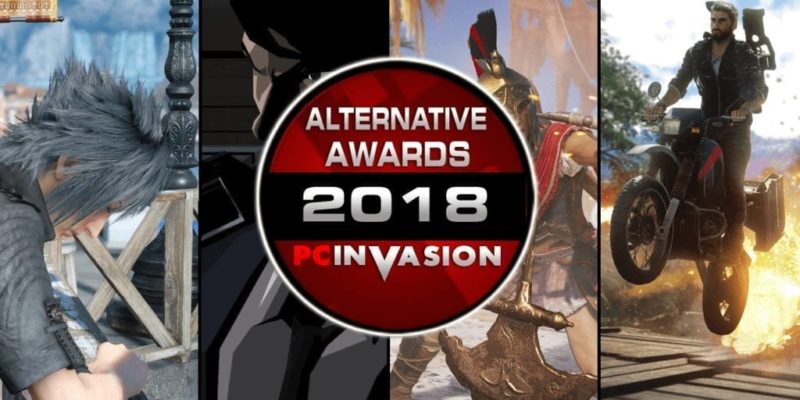 Hello, dear readers, and welcome back once more to PC Invasion’s annual Alternative Awards! As ever, we’re using these (definitely entirely serious) awards to shine a light on the games and gaming events of the year.

Here at PC Invasion HQ, we feel that traditional Game of the Year awards are very nebulous, subjective, and silly. As such, we instead embrace the silliness full-on and dish out awards like “Worst Dad”, “Best Game We Can Make You Buy Using Only GIFs”, and “Best Giant Stone Dongs.”

On a more serious note, some of our writers will also be doing their individual picks of the year, looking at particular releases that clicked with them and explaining why they’re worth your time. But that’s obviously less interesting than giant stone dongs, so let’s get these awards started.

Game Most Likely To Get Me Arrested – Thief Simulator 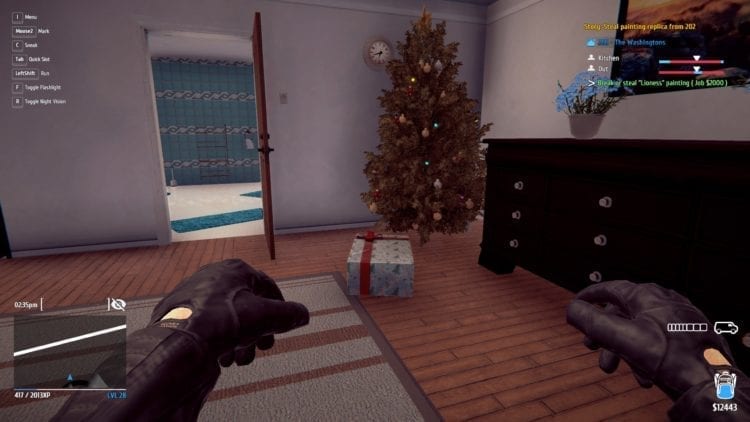 Tim: Having now played Thief Simulator to completion, I’ve decided to pack in this games journalism lark and move onto robbing houses. It’s simple enough: buy some lockpicks and stuff online, and find a likely target. Then I just need to stand outside their house for 24 hours staring at them, because people follow a very strict routine all day, every day, in hour-long blocks. Once I know when they’re out (or when they’re likely to be in an area of the house I don’t want to rob blind) I just have to pop inside without getting spotted and shove everything I want into my backpack before heading off to the pawn shop to make a profit. No risk of getting caught at all.

And hey, even if someone does spot me and calls the police – or I trigger an alarm on a window, or get spotted by a security camera – all I have to do is hide in a cupboard or a dumpster for a few minutes, and then the police will give up and leave me alone forever. Once I’m done with one house, I just move onto next door and commence Operation Creepy Staring again. No hassle, no police, no problem.

That’s how it works in real life, right? Right? I mean, “simulator” is right there in the title.

Note: Due to Tim’s recent conviction for burglary, we have changed this award from “Best Career Change.” 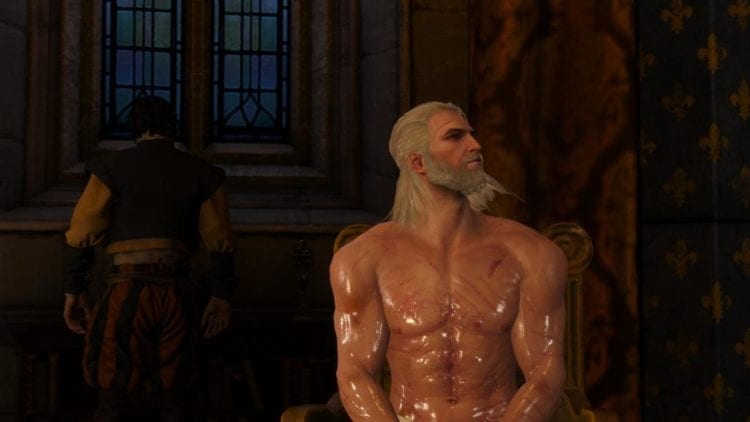 And now, the bugger’s turning up all over the place. While The Witcher 3 was apparently CD Projekt RED’s last venture into his story, online CCG Gwent and its single-player spin-off Thronebreaker have seen them return to the growly huntsman. Not only that, but he’s since appeared in Soulcalibur VI as a player character, and is (in slightly more appropriate fashion) due to show up in Monster Hunter World next year.

Give it ten years and we’ll probably have Geralt Kart. Or at the very least an appearance in Super Smash Bros.

Jason: Well, we know there’s one game he won’t appear in: Metro Exodus. 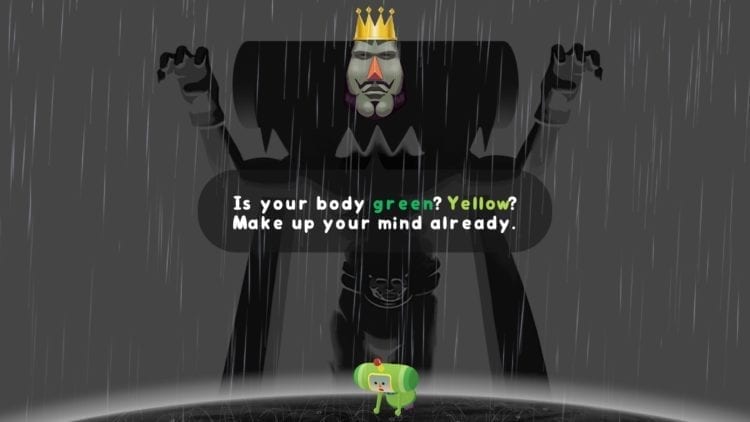 Tim: There are a lot of Bad Dads in videogame land, but I feel like Katamari Damacy REROLL‘s King of All Cosmos takes the terrible cake this year. Let’s start with the basic premise of the game: he goes on a bender and accidentally destroys all of the stars in the sky. As the long-suffering Prince, the player is tasked with rolling up stuff to remake them. Meanwhile, he’ll bitch and moan constantly about how you’re not doing it right, take as much credit as is humanly possible, and occasionally get you presents. (Which he’s lost, and he figures you might as well just try to find while you’re rolling around on Earth.)

And that’s all assuming that you actually do your job right. Fail a level and you’re admonished harshly while rain falls, lightning illuminates the King’s incredibly creepy silhouette, and you’re told how much of a loser you are. Not quite as bad as in the sequels where he starts shooting lasers at you while complaining, amongst other things, but… well, he’s not exactly the role model for supportive fathers.

Jason: I’m tempted to vote for myself, if only because I had to send my three-year-old away to the province when Destiny 2: Forsaken launched just so I could have some free time. Don’t worry, my old folks love him.

Tim: We may need to talk about your workload. 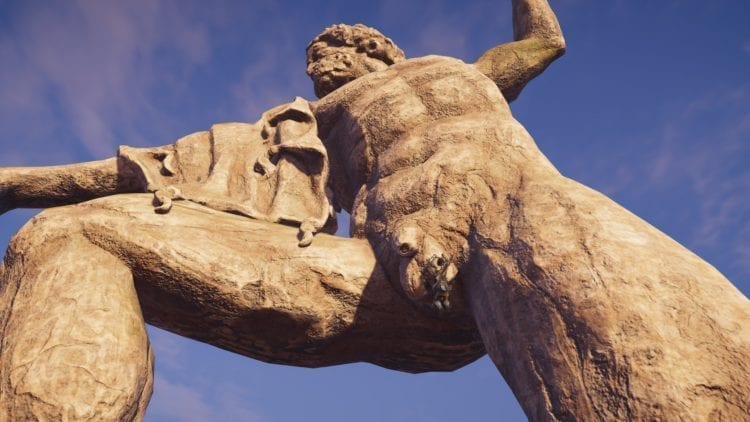 Tim: Assassin’s Creed Odyssey did a lot of things really well, as our Jason related in his review. To my mind, it did two things particularly well. Firstly, it made sure people learned how to spell “Odyssey”, which is a crucial life skill. Secondly, it had a lot of huge statues with large stone ding-a-lings.

I mean, sure: you can go and hunt down the Cult of Kosmos and find out about your parentage. You can assassinate politicians and take part in grand battles for the future of Greece. You can romance people, or debate with Sokrates. Or you can hang off of a granite groin stick and take selfies. If you squint, you can just about see Kassandra in the above screenshot.

Jason: Was there ever any other competition this year for this award? I’m willing to bet that Zhuge Liang’s Eight Stone Dong Maze in Total War: Three Kingdoms will be the front-runner next year. 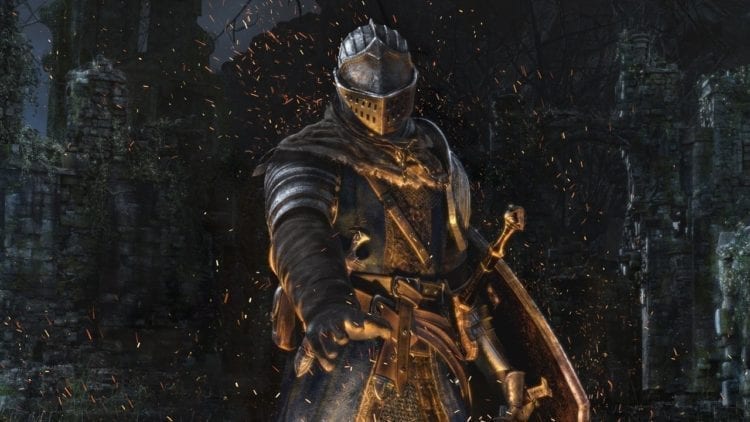 I could complain about the fact that it’s hugely expensive on PC if you already owned the un-remastered edition, since it doesn’t fix or add much that couldn’t be modded in easily, but hey! Dark Souls in 2018! And, as such… 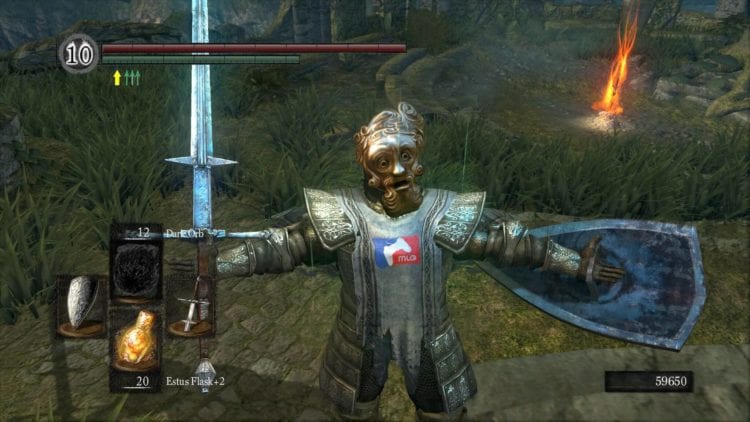 Tim: Also, that makes it seven years running that we’ve managed to find a way to give Dark Souls an award. Let’s see if something happens in 2019 to make it eight!

Jason: Sekiro: Shadows Die Twice has a New Game+ Brutal Mode where beating it without getting hit once lets you view the secret Dark Souls 4 teaser trailer? 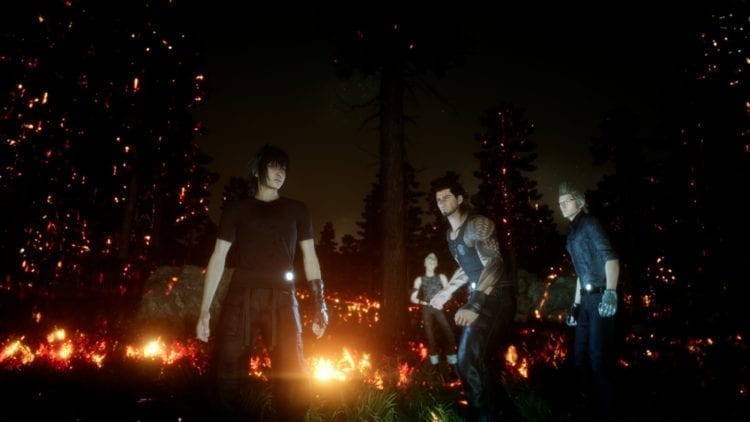 Tim: Lots of games have really awful dungeons, or levels, or whatever. They’re usually set in sewers and involve switch puzzles and mazes – and yes, Final Fantasy XV has one of these. But that’s not the dungeon I’m talking about. Final Fantasy XV has a terrible dungeon that’s also actually really, really good.

I’m going to be oblique so as not to give any explicit spoils, but later in the game, one of your party members becomes somewhat incapacitated — right about the time you’re going through one of the more irritating dungeons in the game. It’s a painful slog, and it’s made all the more painful because you have to constantly stop and wait for your wounded buddy. It’s frustrating and annoying and awful.

It’s also done specifically to mess with your emotions. If you run ahead too far, your party members will chastise the hell out of you for being such a dick and leaving one of your own behind. By this point, you should have an actual emotional connection to your party, and if so then you will feel like an absolute jerk for not hanging back and being supportive. It’s a rare example of a “bad” game mechanic being used in a very clever and positive way, and reinforcing the characters themselves. 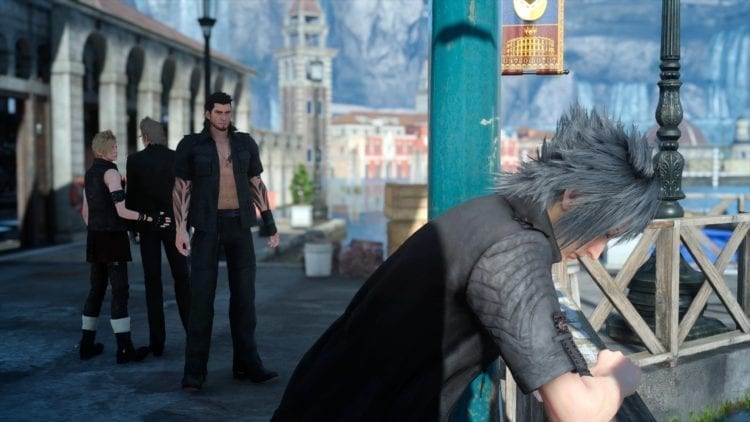 Tim: That’s actually just one minor example of the emotion-fucking that Final Fantasy XV inflicts upon any player foolish enough to get attached to its characters. What starts as a boy band road trip (as I affectionally call it) – essentially, a bachelor trip to the protagonist’s wedding – rapidly devolves into horror and tragedy and sorrow. And also destiny and giant swords, because this is a Final Fantasy game, after all.

I’m not going to go into specifics, but I will say that the ending made me blub, and I can’t actually watch the intro – or hear Florence and the Machine’s beautiful cover of Stand By Me, used to glorious effect in said intro – without starting to tear up a bit.

Sorry, I think I’ve got something in my eye. I need a moment.

Jason: Hold on, I just got this game during the Winter Sale and haven’t even installed it yet. 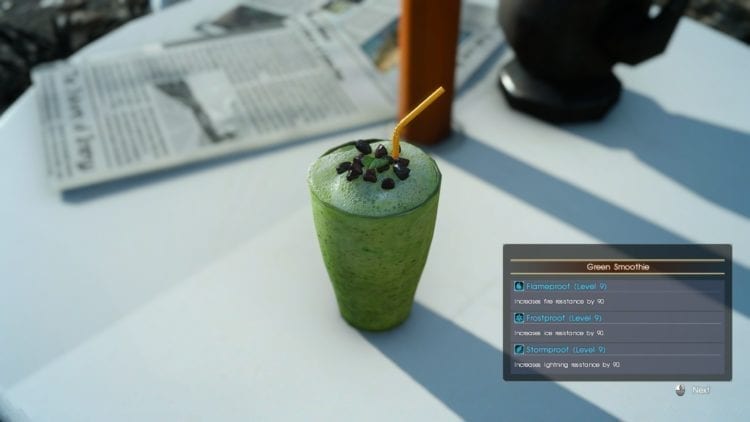 Tim: There are many recipes in Final Fantasy XV, and I want most of them to be in my mouth in real life. Especially when the results look like the above. This game puts more effort into its food presentation than most restaurants.

Jason: I take it you don’t have bubble tea where you live?

Tim: Actually, no. But come on, that looks amazing. Don’t make me send you screenshots of Final Fantasy XV‘s food.

Most Hurtful Easter Egg – Just Cause 4 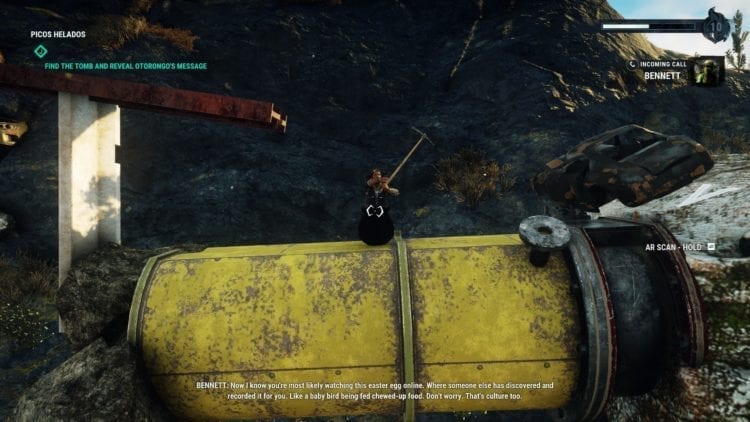 Tim: Some easter eggs are made to make you chuckle, or smile appreciatively at a reference. There are some in Just Cause 4‘s massive open world that do this. But there’s one easter egg in the explode-athon which was made for a certain kind of person. To hurt them.

Not many are likely to find it without some serious scouring, but it’s an excellent little extra, not least because it actually adds a bit of content rather than just being an in-game model referencing something else. (But it’s still very frustrating.)

Tim: I’m a forgetful sort so some of these might be from sequel Yakuza Kiwami, but as that’s not on PC yet and any GIFs from the series will make people go “Wow, I need to check this out”, I present to the court:

By Kevin Foley4 days ago
News