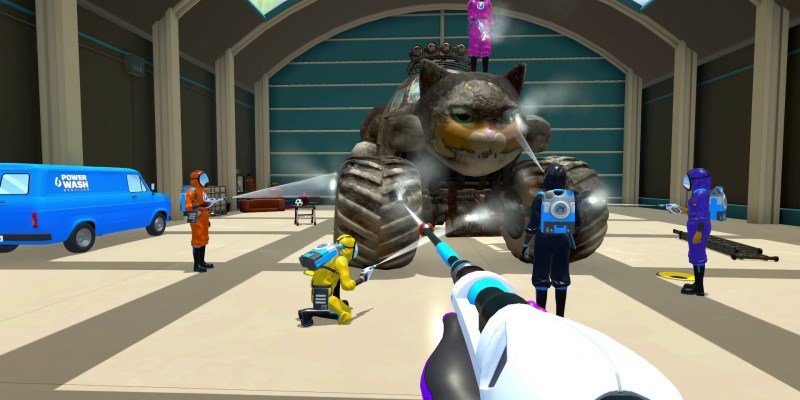 Powerwash Simulator has had a very active Early Access period. Between regular updates bringing more jobs, the game has been steadily moving towards completion at a very respectable pace. The game has just received update 0.7, bringing with it even more jobs, a new class of washer, and two beta multiplayer modes. If you’ve ever been carefully cleaning the filth off the side of a digital building and thought, “man, I really wish I had someone to get the other side” well, now you can. Cleaning is a team activity, so it’s a very nice surprise to be able to have help in-game now.

As for the new jobs, you can now clean an entire Ferris Wheel, as well as a monster truck. Man, these new jobs just keep getting crazier and crazier, don’t they? A professional duty washer is now available as well. It’s called the Prima Vista Pro and it’s now the strongest washer you can get in-game. On top of that, you can grab new cosmetics which include new colors, a new washer skin, and blue gloves. There’s even a new timed challenge focusing on the motorbike and sidecar. On the options front, Powerwash Simulator has finally gotten an FOV slider, so we can crank that bad boy up.

Obviously, the most exciting bit of news is the co-op play. This is all beta, so the devs are keeping on close eye on any potential issues that pop up. Co-op in Powerwash Simulator now comes in two varieties. The first of which allows you and one friend to clean together in career mode, but only the host will get the cash for completing, so no grinding for you. However, in free mode, you can play with five other people, which will undoubtedly lead to powerwasher parties. That actually sounds kind of dangerous. Don’t try this at home, kids.