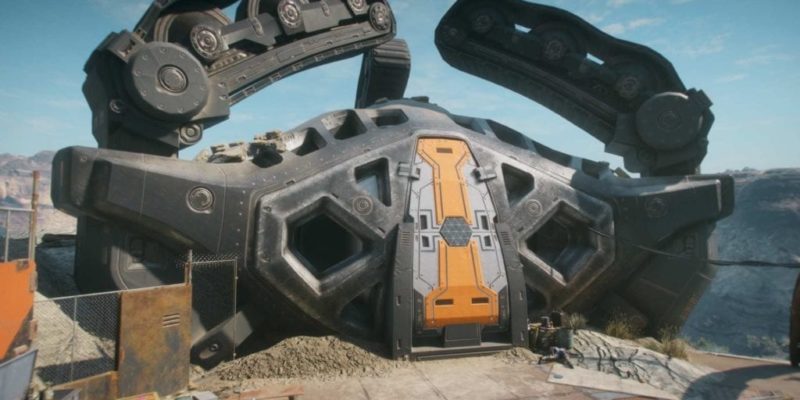 As the last Ranger in Rage 2, you’ll have arm-up and get revenge against the Authority. That means you need guns, but your special Ranger suit also grants you special Nanotrite Abilities (basically superpowers) to use against your enemies. You’ll find both at special Ark locations scattered throughout the wasteland.

But you can spend less time driving around aimlessly and more time shooting with this handy map of all 14 of Rage 2‘s Ark locations, along with the loot they have inside. Be warned that there are some minor spoilers ahead. 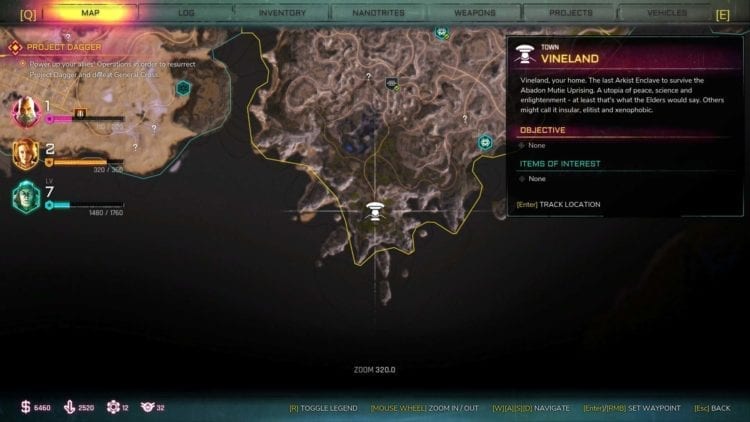 You start Rage 2 by helping to defend the town of Vineland from attack. This is where you acquire the Ranger suit, along with basic weapons such as the Pistol, Wingstick, Grenades, and Assault Rifle. The suit comes with the ability to go into Overdrive, which temporarily speeds up health regeneration while dialing up the damage on weapons.

It’s also revealed that there’s an Ark hidden beneath the town containing the Dash Nanotrite Ability, which allows you to surge in any direction to evade incoming fire. After you activate the Ark, Lily will set you up with a powerful car, the Phoenix, for traveling across the wild wasteland. 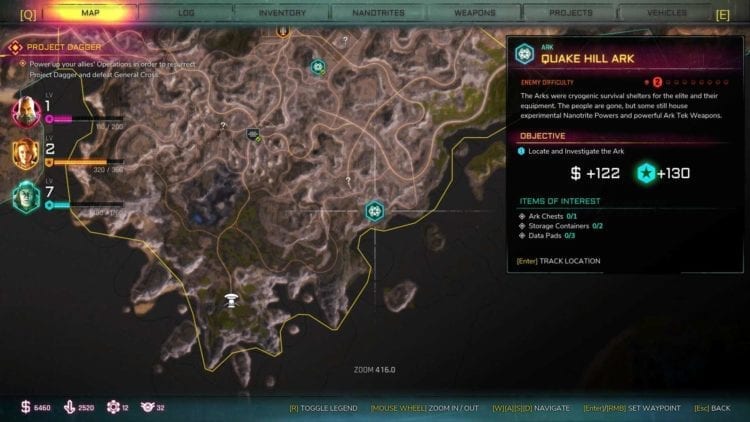 Head northeast from Vineland toward the coast to find the Quake Hill Ark. It’s inside a large cliffside facility with a gigantic failing blast door. Take care of the enemies squatting inside and solve a couple of environmental puzzles to get the Vortex ability. This allows you to throw down an orb that will suck groups of enemies together before exploding. Standing on top of an orb as it explodes will launch you upward so you can quickly reach high areas. 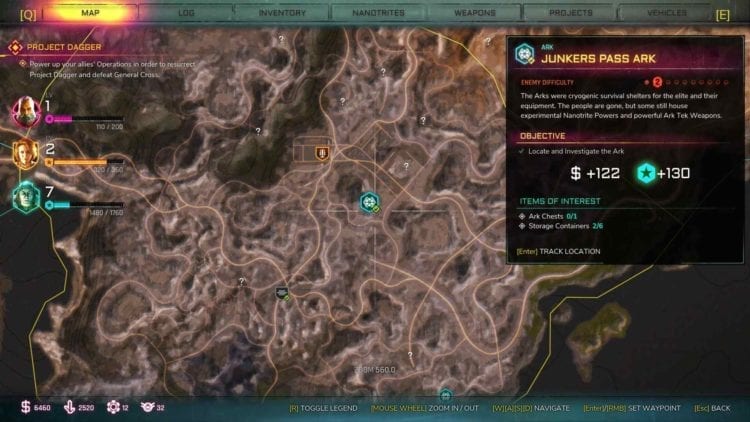 Located in the middle of Twisting Canyons region, on the way to Gunbarrel, you’ll find the Junkers Pass Ark. Inside is the Shatter ability, a powerful kinetic blast that will violently push enemies away from you and could make their heads explode. 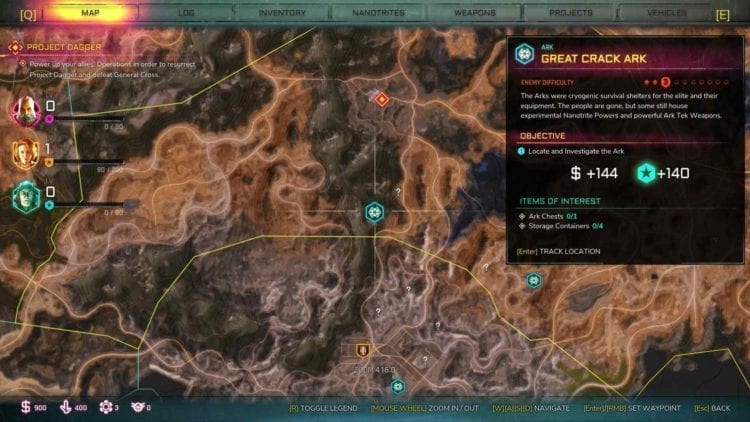 The Great Crack Ark is inside the Broken Tract, on the way to the town of Gunbarrel. Clear it out to receive Grav-Jump, which is essentially double-jump for getting around easier. 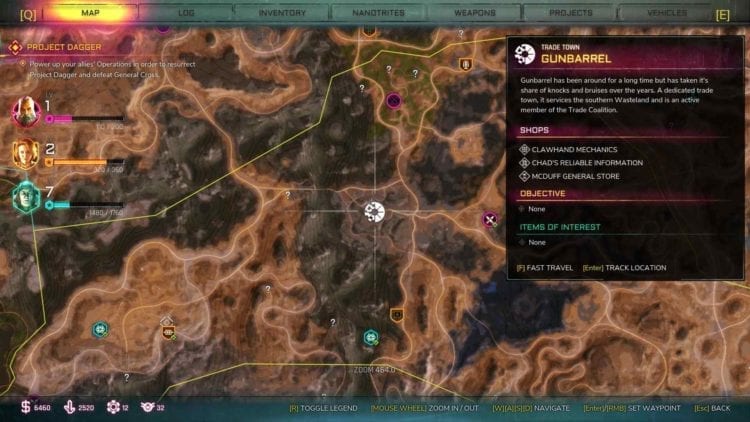 Although it isn’t listed as an official Ark, Rage 2 has a pod located beneath the town of Gunbarrel. You pass it while doing your first mission for Marshall, so you can’t miss it. Open it up and inside you’ll find the versatile and powerful Combat Shotgun. It can fire a spread to damage multiple enemies, but aiming down its sights shoots a single slug that will knock enemies back. You can also purchase deployable Turrets from stores across all the trade towns. 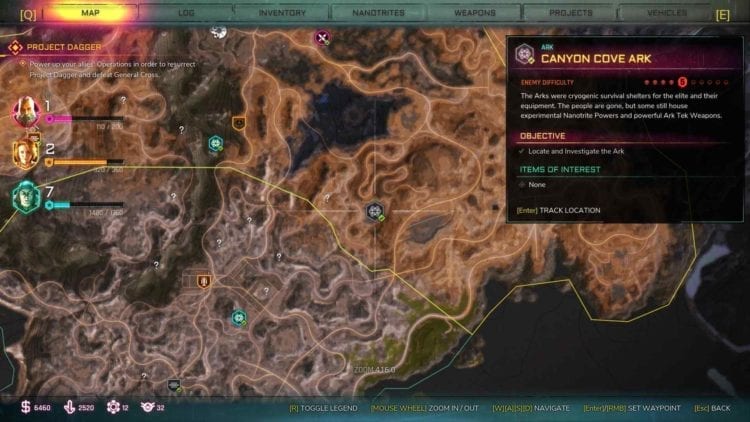 Make your way through the southwest parts of the Broken Tract to find the Canyon Cove Ark. The enemies are well armored, so clearing this one out could be a little tricky, but doing so gets you Defibrillation. This passive ability gives you a chance to pick yourself back up if you’re downed in combat. 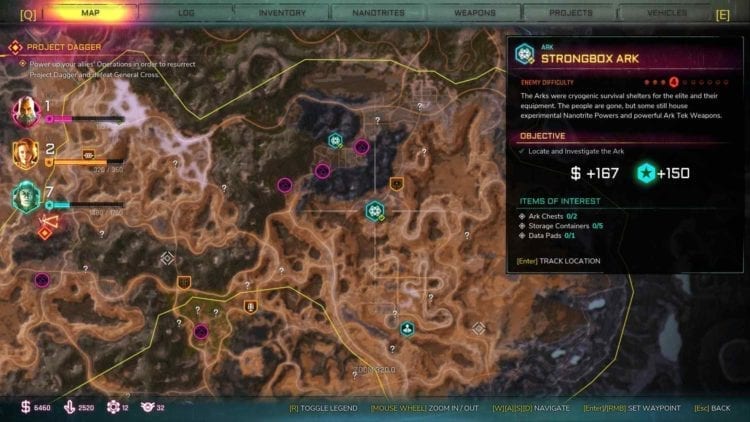 Head straight north from Chazcar Derby in the Torn Plains to find the Strongbox Ark. Make your way to the heart of this former town to find the ever-powerful Smart Rocket Launcher. It does massive damage, and its alternate fire can launch homing rockets at multiple enemies. 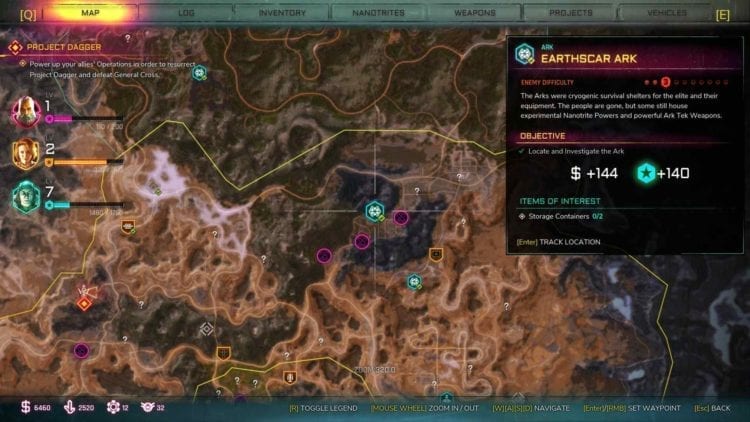 Not too far northwest from the Strongbox Ark, you’ll find Earthscar Ark. Prepare for a significant fight to open this one. Inside is the Slam ability, which releases a burst of energy when you pound your fist into the ground. Jumping from greater heights maximizes the damage. 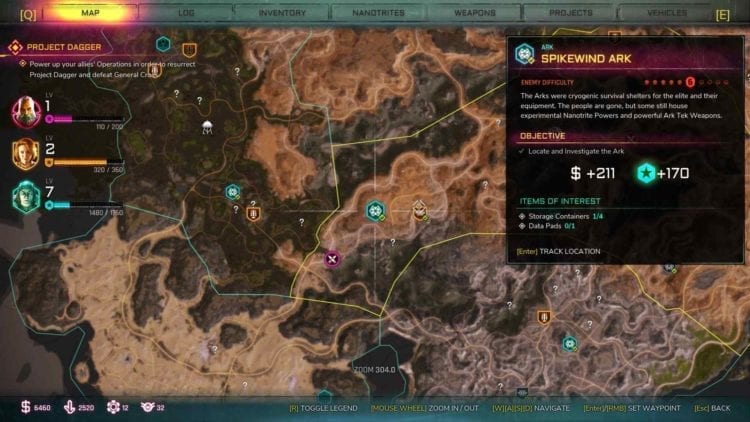 Located near the western border of the Broken Tract, Spikewind Ark contains the Barrier Nanotrite Ability. As the name indicates, it throws down a temporary energy shield that will stop all incoming damage. The alternate fire button will take the shield down early. 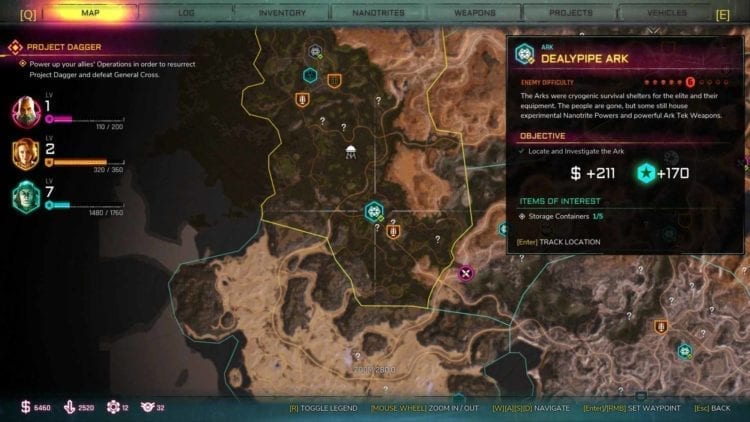 The Dealypipe Ark can be found in the Sekreto Wetlands, south of Lagoony. Inside is the Rush ability, which lets you run faster for a limited about of time. 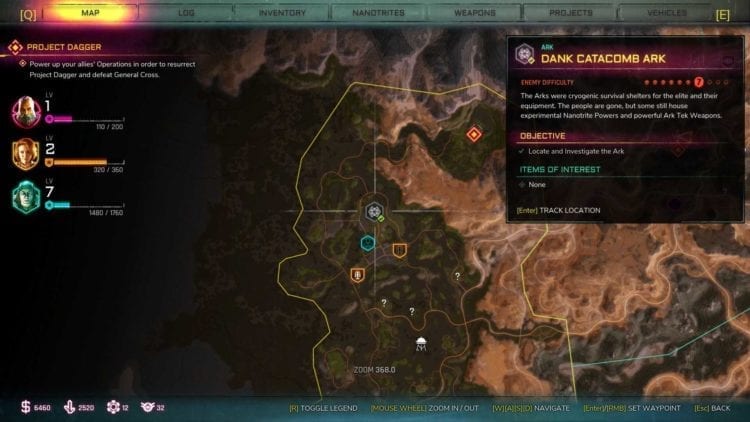 Head north from Lagoony to find the Dank Catacomb Ark. It’s practically on the way to Dr. Kvasir’s laboratory. Inside is the hot little Firestorm Revolver. Shoot enemies with it and snap your fingers to literally light them up. 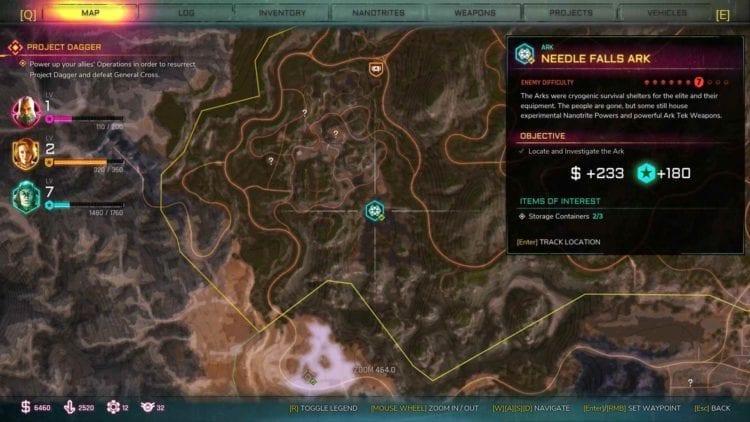 You’ll find the Needle Falls Ark located near the southwestern border of The Wilds – the northmost region on the Rage 2 map. This one can be tough because the Ark is located high up on a ridge and is surrounded by the Authority’s mutant soldiers. Inside is the Grav-Dart Launcher, which you can use to fill your enemies with barbed graviton darts so that they can be slammed into the wall or object of your choosing. The more darts you put in them, the more violent the trip will be! 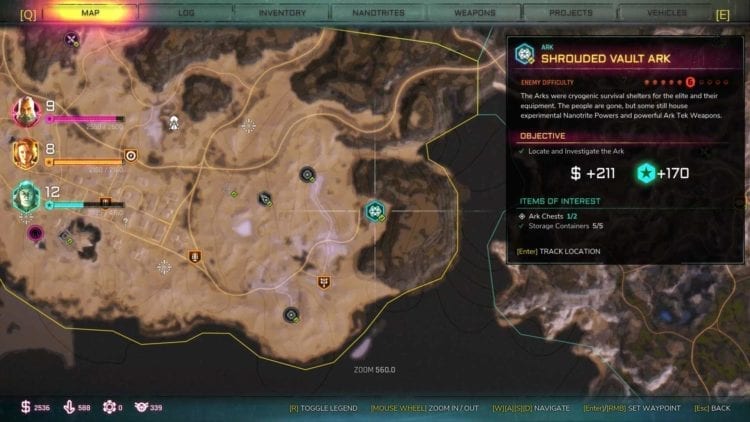 Found at the eastern-most part of the Dune Sea, the Shrouded Vault Ark requires some extra effort to get into. You’ll need to destroy two neighboring power stations to unlock the front door of the building. Once you’re inside, clear out all the enemies and reach the Ark to retrieve the Charged Pulse Cannon. With it, you can fire a stream of molten hot energy bolts at your foes. 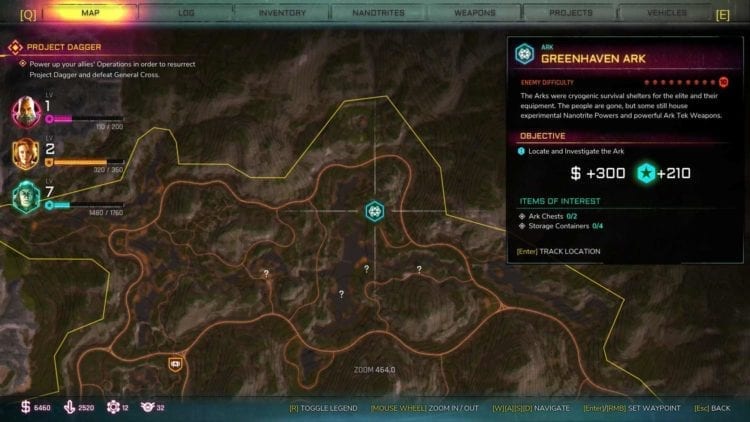 In the northern section of The Wilds lies Greenhaven Ark, the toughest Ark location of them all. It’s full of mutants and Authority goons, so be prepared with plenty of firepower and upgrades because you’ll need them. Your prize is the Hyper-Cannon, which is Rage 2’s name for a railgun. Aiming with the scope charges up the slug so that it will take out multiple enemies in a line.

Those are all the Ark locations in Rage 2, granting you access to all the high-tech weapons and Nanotrite Abilities within. Grab the game, check out our review, and use your newfound powers to take down the Authority while clearing a path of destruction across the wasteland!

How to do the Fortnite locations challenge: Fancy View, Rainbow Rentals and Lockie’s Lighthouse