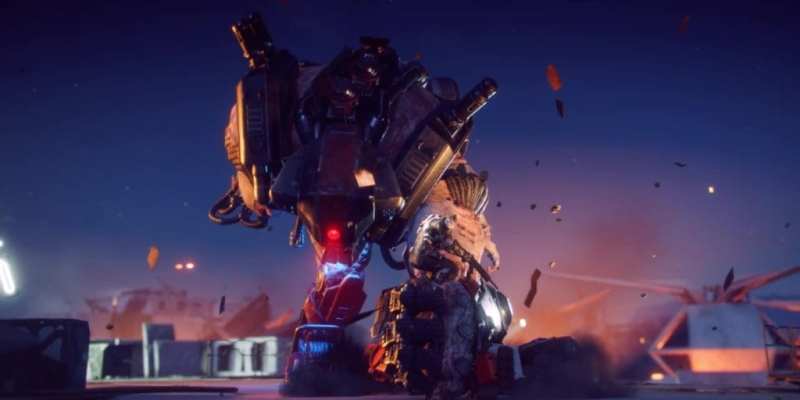 Take the fast-paced action of Doom and mash it together with an insane Mad Max-style post-apocalyptic open world, and you have Rage 2. That describes the game almost in its entirety, and it appears to revel in how off-the-wall things can be. There are bandit camps, mutants, and giant monsters, all ready to rip you apart. So, you clearly need to ready up your weapons and blast them to pieces first.

You play as Walker, one of the last survivors from the Ark survivor town Vineland, which was wiped out in a devastating attack by the Authority. Not only is this group of bandits the same as from the previous game, but the Authority is even led by the same General Cross – although both seem to have received some significant upgrades. 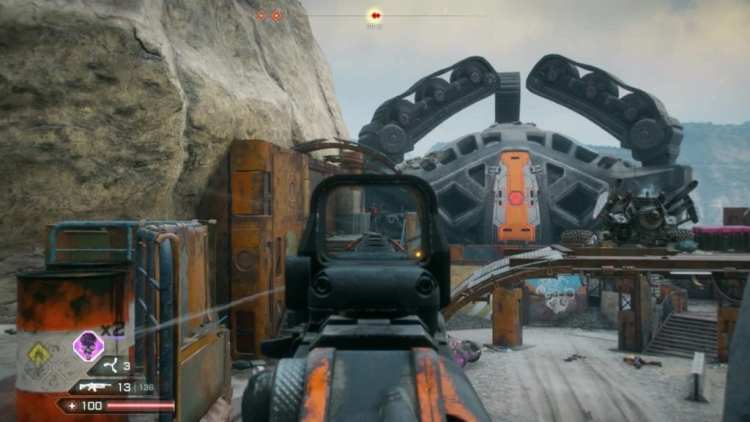 Fighting to gain access to an Ark, which will make you even more unstoppable.

That’s okay, though, because you have plenty of weapons of your own. Specifically, you have a Ranger suit that grants you a variety of superpowers, a car that you can equip with an array of weapons, and plenty of ammunition. Your mission is clear: find supporters to help you get revenge against Cross, locate Arks to acquire additional skills and weapons, then get to shooting. Along the way, you’ll bring some sense of peace and stability to the wasteland by substantially reducing the bandit and mutant population.

There’s nothing subtle about Rage 2. Stealth isn’t really a thing, and practically every situation requires you to wipe out every living thing in sight. But that’s all part of its charm. In a sense, this is 2016’s Doom set in a massive open world. This means that the action ramps up when you raid encampments and enter into close-quarters combat, especially during campaign missions. But at the same time, the wasteland often feels tame when you’re not shooting the place up.

The game is extremely straightforward. Travel to a location. Eliminate all the enemies. Open all the boxes. Grab all the things. And then move to the next location to do it all over again. You might run over a bandit or two along the way, some of whom might be battling against mutants. But otherwise, the roads prove pretty quiet. Aside from the occasional roadblock, you can easily drive from one end of the map to the other without anyone harassing or harming you. 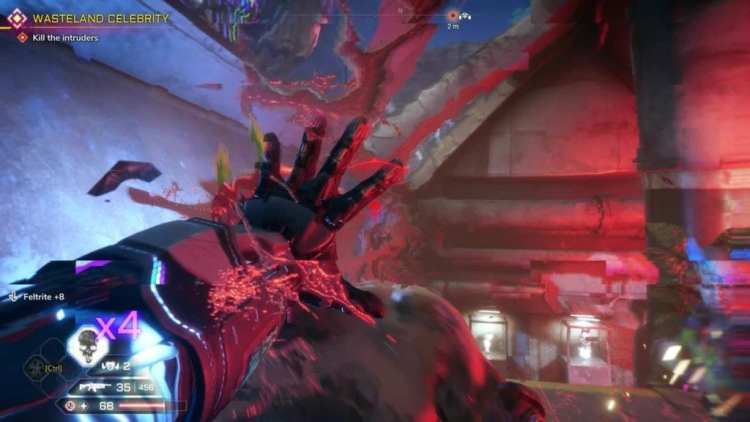 Using Shatter on a bandit’s face is one of the great joys of life.

Close quarters action is fantastic, especially since the weapons and abilities are all upgradable. All the guns have secondary fire options that often change the way they perform. For example, the aiming down the sights of the shotgun fires a single dense slug that will knock an enemy back. Meanwhile, the Shatter ability uses telekinetic energy to blast foes to bits. When combined with vertical encampments and enemies that dash back-and-forth, jumping into a Rage 2 battle proves nothing short of a blood-soaked thrill.

But while confining the action to voluntary engagements is fine, it also means that the AI can act fantastically dumb. For example, you can park your car right in front of a bandit base and no one will notice you until you open fire. Additionally, enemies will usually stay confined to certain areas and probably won’t come looking for you, even if you just wasted all their friends down the hall. This can make the action feel overly scripted, and hunting down the last stragglers in a large base can be a real pain.

Despite the intense action and complex story levels, Rage 2 ends up as a fairly easy shooter. You pretty much become a one-person death machine once you acquire and upgrade a couple of abilities and pick up a few weapons (especially the shotgun and rocket launcher). Besides, enemies don’t act very interested in putting up a fight outside of overwhelming numbers. 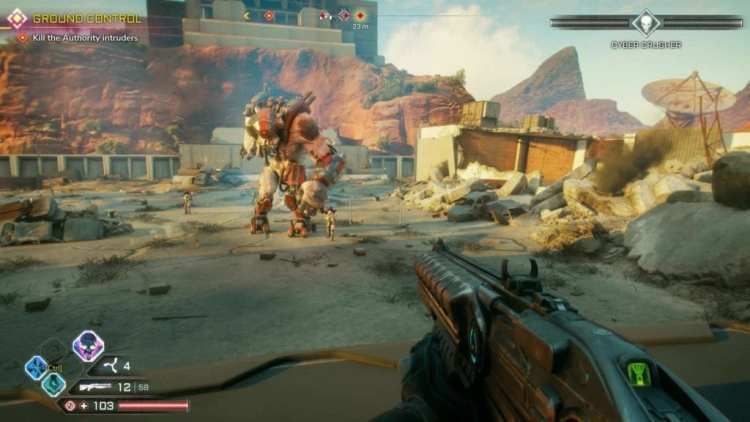 Worst of all, not even the game’s mini-boss creatures pose much of a threat. Take the giant mutant monster that helped wipe out Vineland. Despite their large stature and power, they’re fantastically easy to defeat. All you need to do is pull out your trusty rocket launcher and fire at the shield batteries protruding from its back. Blowing up a battery puts it into a stun animation, giving you time to reload and stun it again. More often than not, I felled these giants before they could take a single shot at me.

Bandits sitting along the road just seem to be hanging out instead of laying in wait to ambush unsuspecting vehicles. Enemies fighting each other provide some animated sequences to break up the monotony, but it quickly becomes clear that they exist as window dressing so that the wasteland doesn’t look entirely empty.

Not to mention that, even though you can steal practically any vehicle in the game, the only one that’s worth driving is yours. Although some cars have interesting weapons and infinite ammunition, they’re often too specialized to be worth keeping. There’s not a lot of use for enemy vehicles outside driving them back to town for cash. Take the roadster that leaves a trail of fire behind it as an example. Other than what you start, there are no road battles or chases, so there is almost never an instance where lighting up your rear is useful. 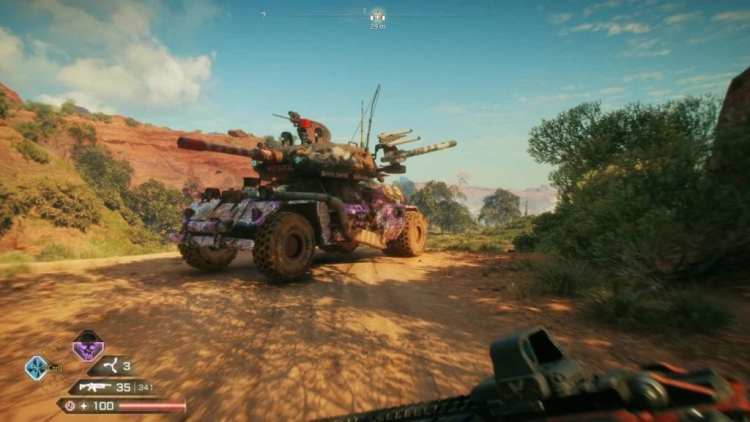 Rage 2 has some wildly stylized vehicles, but they’re not worth keeping.

Sure, there are a few distractions, like enemy convoy heists to gain resources, which are fun the first few times. You could also take your aggression out on mutants by playing a few rounds of Smash TV. However, that’s really just you doing the same thing you already do (shooting everything in sight), except in enclosed spaces with environmental hazards. You could jump into a circuit race, but they’re surprisingly tame. There’s no killing involved in these races, which is a tremendous disappointment.

Although the graphics in Rage 2 are very well done, the game has plenty of painfully obvious quirks. NPCs will sometimes vanish, leaving nothing but a talk bubble in their place. Bushes, rocks, and other debris fly around like they’re made of Styrofoam, and some cars look like they’re on fire until you get close to them. Enemies may get stuck in walls. Not only are you unable to drive boats, stepping onto one causes damage and strangely contorted animations. 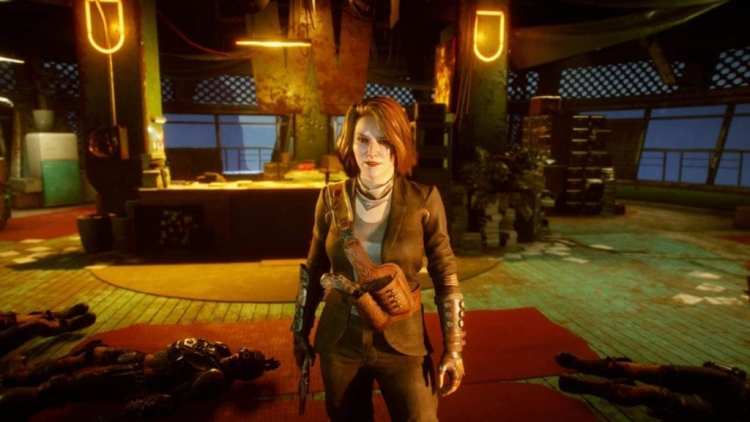 Loosum Hagar is one of three key characters you’ll meet and soon forget about.

Most prominently, characters move their lips when they’re not saying anything, which makes me wonder if there’s missing dialogue. At other times, dialogue may be extremely delayed. One character told me over the radio to come meet her after I had already fast traveled to the city, took the elevator up to her office, and was standing across from her statue-still body.

It doesn’t help that almost all the characters in Rage 2 are uninteresting and completely forgettable, with the possible exception of Dr. Kvasir, who rides atop a giant baby mutant. Other annoying quirks include Lily always repeating the same line of dialogue each time I found a new bandit base. Unless there was something mission-specific to say, there’s not much banter that goes on in the game. As a result, I felt completely indifferent toward the characters who were helping me on my revenge mission. I didn’t even care that much about the big bad guy, General Cross, whose goal is to wipe out all the “weak” life on Earth. Sorry buddy, already beat you to it.

Then there are the little things, like always having to get out of the car to pick up loot, which took some of the thrill out of running roadside enemies over. Vehicle weapons can’t be assigned to number keys, forcing players to either use the weapon wheel or cycle through them. Then there’s how Felrite ore only be pulled out of walls and meteors one at a time instead of a few at once. They all add up after a while.

Although Rage 2 features top-notch close-quarters combat with a variety of enemies, it’s defined by its big boss battles define it. However, it doesn’t offer enough to maintain an entire open world game. The activities outside of shooting and story missions quickly grow stale, as does the world itself once you blaze a trail of destruction across it. While its glitches and issues aren’t enough to outright ruin the game, they happen frequently enough to be distracting. 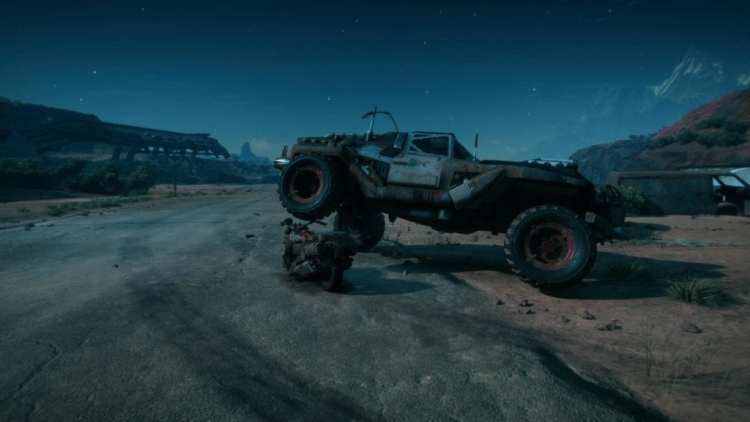 Parking problems in the wasteland.

Without interesting characters or deep side missions to liven things up, Rage 2’s gameplay goes into a steep dive that it doesn’t recover from. This might have been remedied if it had included cooperative multiplayer like its predecessor did, but we’ll probably never know. As it is now, once the thrill of being an unstoppable super soldier starts to wear thin, the rest of the game comes to a crashing halt.

Although Rage 2 features fantastic close-quarters combat, things tend to slide downhill once you drive out into the open world.

World of Warcraft Classic takes you back in time this August