If you don’t know Resident Evil, you haven’t been paying much attention to gaming for the past 19 years. The clunky, fixed-perspective, third-person survival horror game took what Alone in the Dark did and made it super-popular, especially on the console machines. And also added some of the most hilarious voice acting ever heard in gaming, because why not? 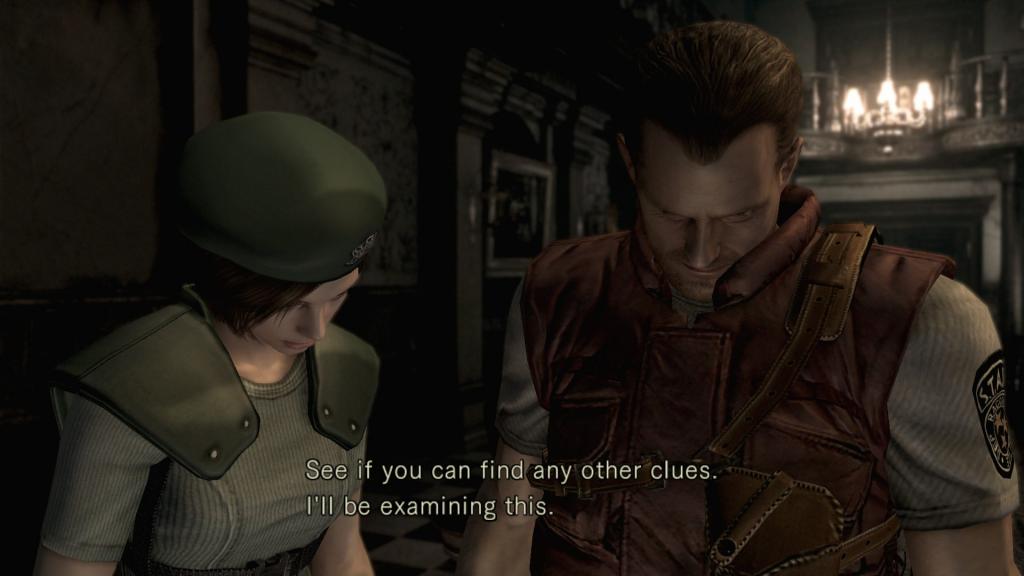 Even Barry’s curious about what we think.

So how does Resident Evil HD stand up on PC? Let’s take a look.

The game is a space-chomping 18GB, so it’s not the tiniest install in the world, but I suppose that’s perfectly understandable if everything’s been HD-ified. The game itself opened up at 1280×720 windowed, but… well, that’s not too much of a problem, as long as the options let me fix that. 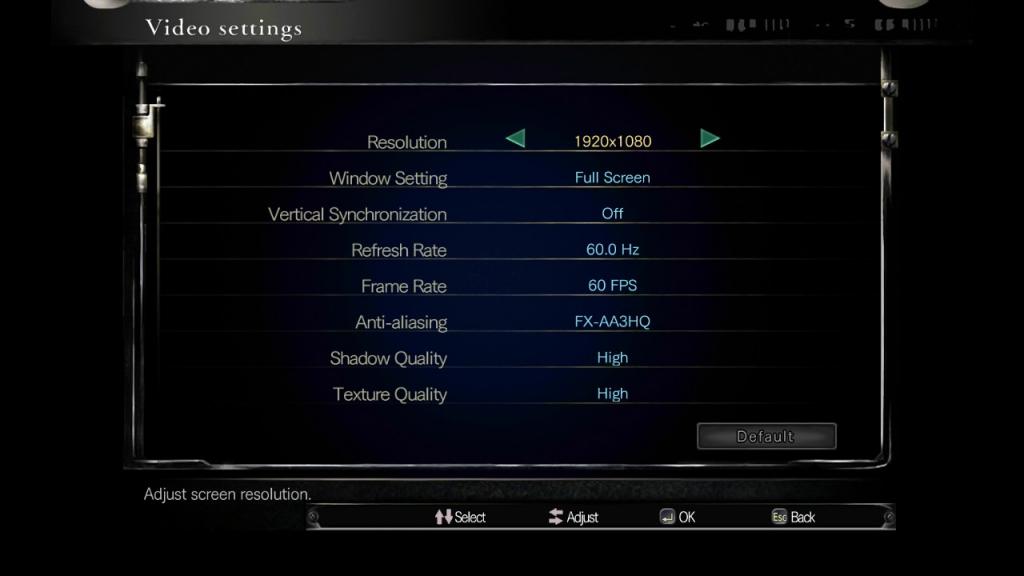 Pretty much the maximum, albeit with VSync off.

The options let me fix that. Capcom have been doing some really good ports over the last few years, and my initial impressions (based solely on the options menu) are that Resident Evil HD holds up just as well. Okay, sure – I’ve seen games with a lot more in the way of tweakables, but I’m actually kinda impressed to see both a Refresh Rate and a Frame Rate option (the latter of which offers 30 FPS, 60 FPS, and Variable). What you’re seeing above, incidentally, is what I used to take all of the screenshots you’ll see.

Graphical options aside, there are a fair few other tweakables. There’s a Brightness screen, for instance, which… actually has two different sets of options, depending on whether you’re wanting to tweak the brightness in-game or by adjusting your monitor/TV brightness manually. I’m also tickled by the Language options, if only because setting the display language to Japanese just changes the menu text to CAPITAL LETTERS. 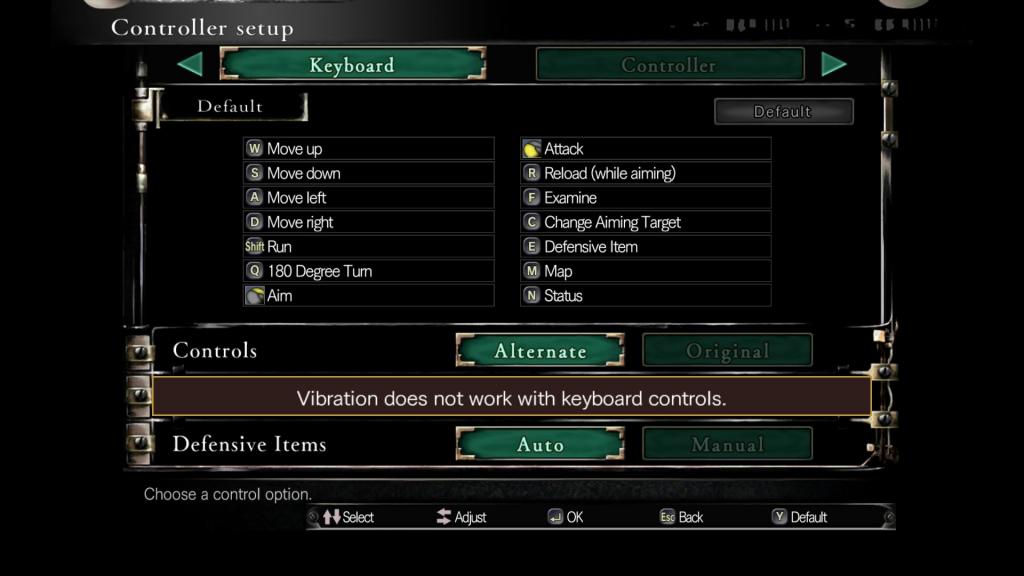 If keyboard manufacturers ever start adding vibration, I may have to move somewhere without electricity.

Then there are the controls, which are entirely customisable. You’ve got both the Alternate controls (which have you instantly sprint in the direction you push) and the Original controls (which have you turn like the world’s slowest tank, and shuffle forwards or backwards like a 90-year old on a zimmerframe). Alternate controls are probably the way to go, buuuut we’ll talk about that more in a little while. 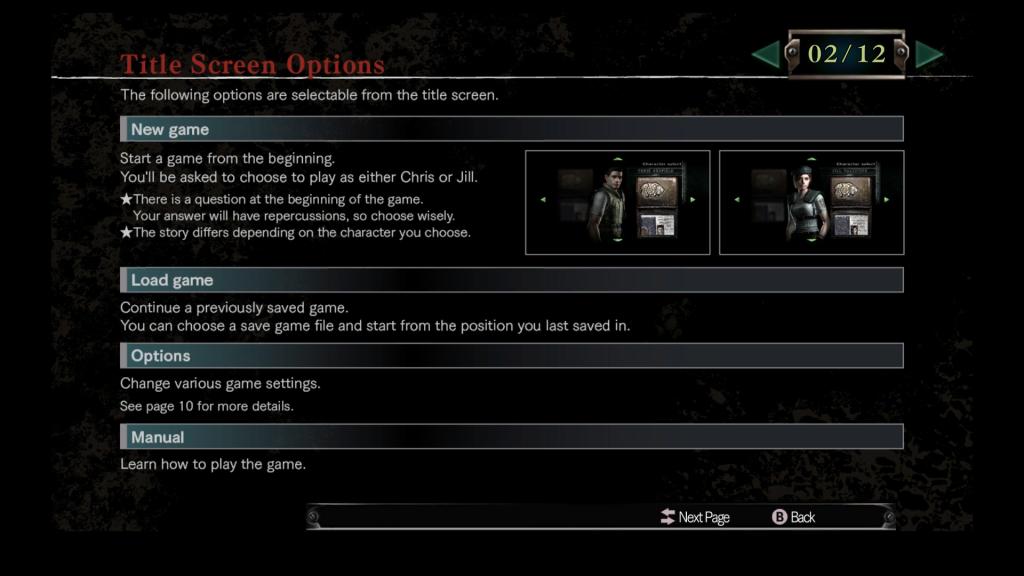 Finally, I’d like to note that I’m really happy to see a digital manual within the game itself. There are often digital manuals tucked away with downloaded games as a .pdf secreted into the game directory, but having a nice big manual on the main options screen is something I’m actually happy to see. Sadly, it’s only available on the main menu and not when you’re wandering the mansion itself.

But enough of this. Let’s try the game. 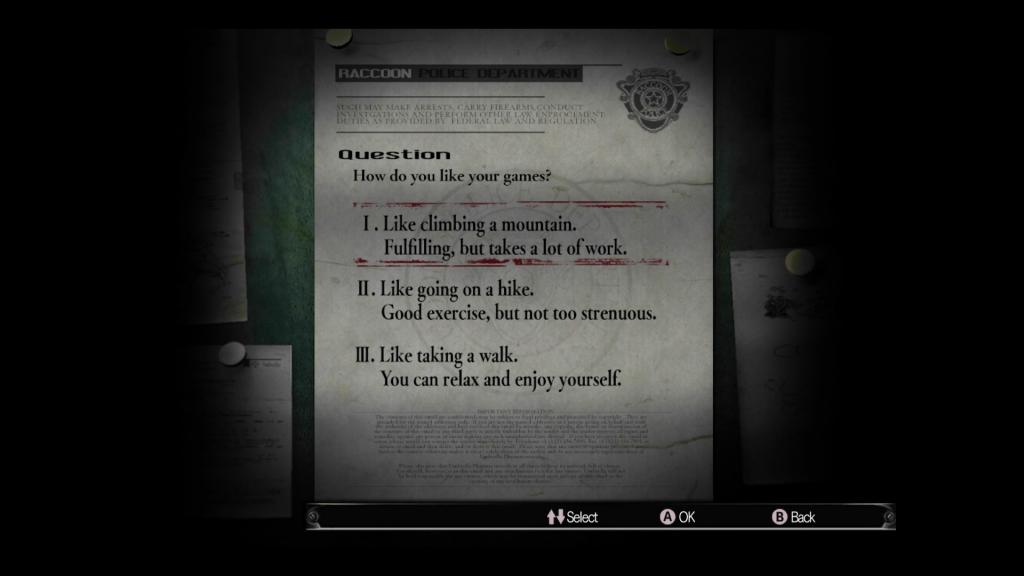 First things first: character selection and difficulty. Difficulty is selected via a vaguely hilarious question, which I seem to recall is pretty much how it was done back in 1996’s Resident Evil. Character selection offers us Chris or Jill (naturally), with alternate costumes based on their BSAA outfits in the future. We’re obviously going for Jill, because that means more Barry Burton in the early game. 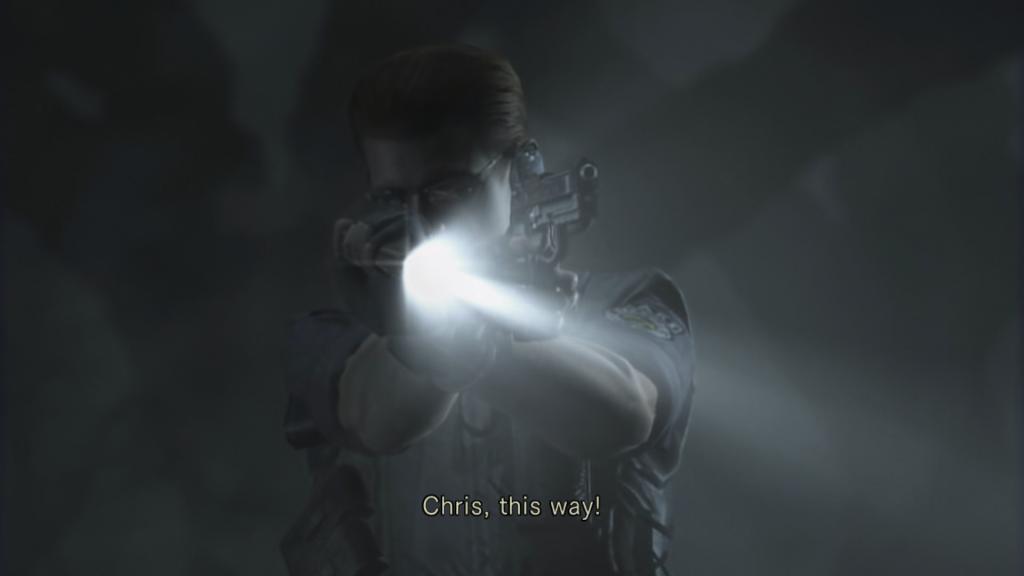 That comma, so upset by the voice actor completely ignoring its presence, later turned to drink.

Resident Evil HD‘s intro sequence isn’t the prettiest thing in the world, most likely because it’s a pre-rendered affair that was almost certainly done at a significantly lower resolution than what I’ve actually got the game set to. It does, however, contain CHRIS THIS WAY, so bonus points for that. 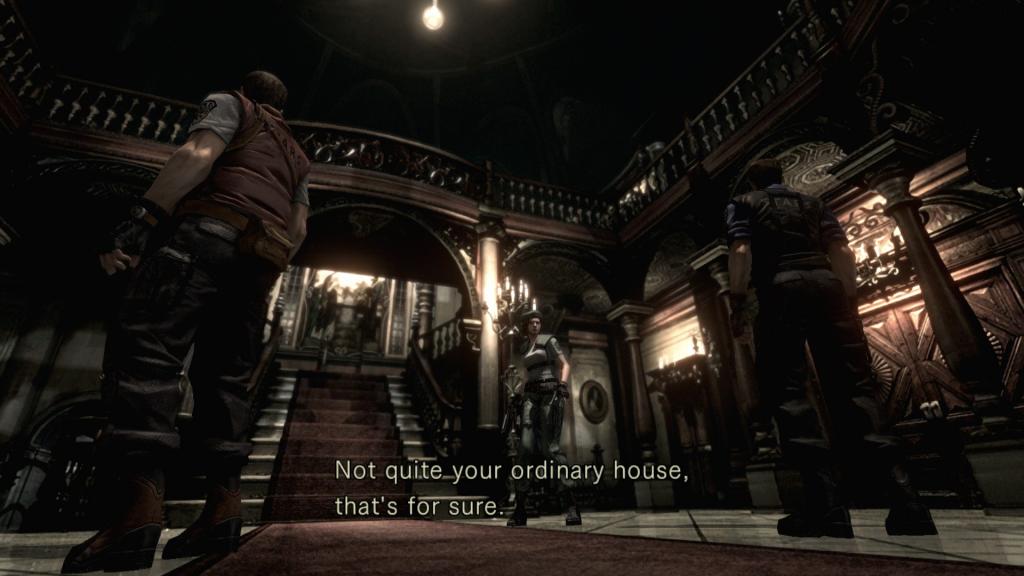 Wow! What a mansion!

And when the game actually starts… um, it really does look quite nice. There are a few niggling issues – the background art seems to be at a lower resolution than the character models, which is occasionally slightly jarring, and there are a few moments when I get some sort of weird mental dissonance and notice that the characters aren’t actually “standing” on anything and are just sort of floating around against a background – but as soon as I actually took control, both of these issues disappeared.

No, really. I mean, I know that the characters really are just floating about on a painted background, but for whatever reason the illusion worked as soon as I was actually in control – and that painted background, despite the resolution discrepancy, is gorgeous. The fact that parts of the background are animated – like flickering candles, or the strobing effects from underpowered lanterns – helps a lot. It runs butter-smooth at 60 FPS, and… well, it looks a lot better in motion than in still pictures. So maybe this plethora of screenshots isn’t too helpful. Sorry.

Still, let’s take a moment to look at one of those character models close-up and coo “Ooh, that’s a bit nice, isn’t it?” 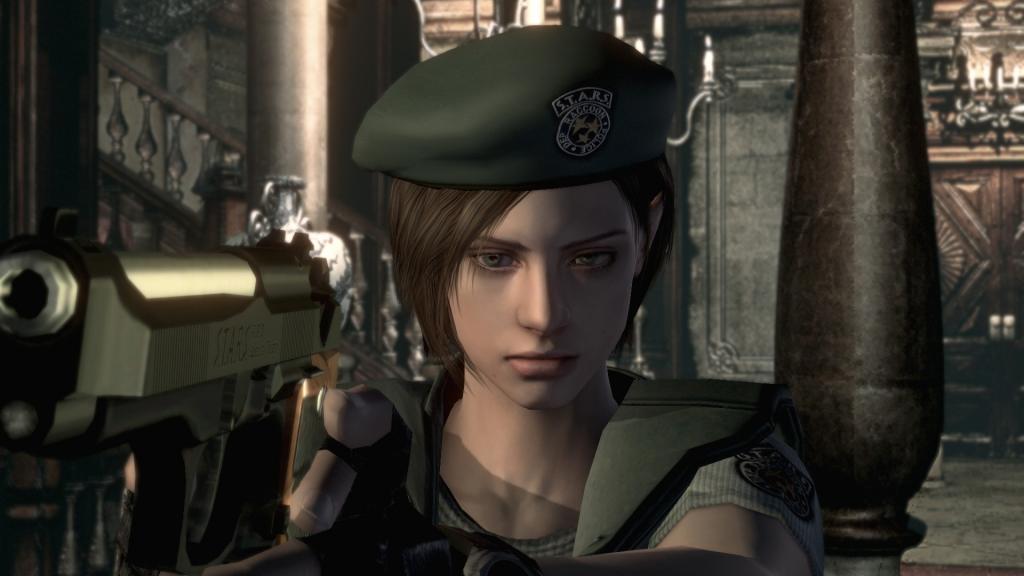 I’m not the biggest fan of fixed-perspective third-person games, but I can’t really argue that Resident Evil would work better any other way. It plays off this stuff incredibly well, both in terms of puzzle solving and surprising you with enemies. The latter might be slightly cheap, but… look, it’s Resident Evil. If there’s one game that can be forgiven for that shit, it’s this one. 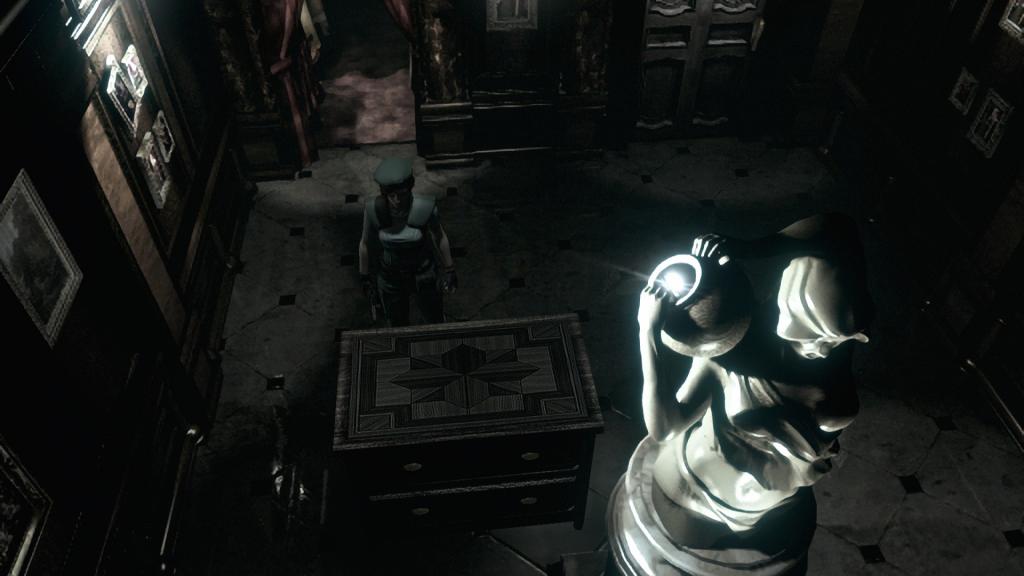 That key probably would’ve been a bastard to find without the fixed camera, for instance.

Capcom wisely avoided one of the pitfalls of fixed-perspective games by making it so that the game keeps your momentum. Even if the camera shifts, as long as you’re holding down the same button, your character will keep running the same way. As such, if your character runs away from the camera, and then the shift in perspective means they’re running towards the camera… well, they’ll keep running in the same direction as long as you keep the button held down. Rather than instantly turning around and running back as soon as the perspective shifts. Thank Christ.

Aiming and shooting is still a bit naff because literally the only thing that the alternate controls change is the movement, but you can’t have everything. 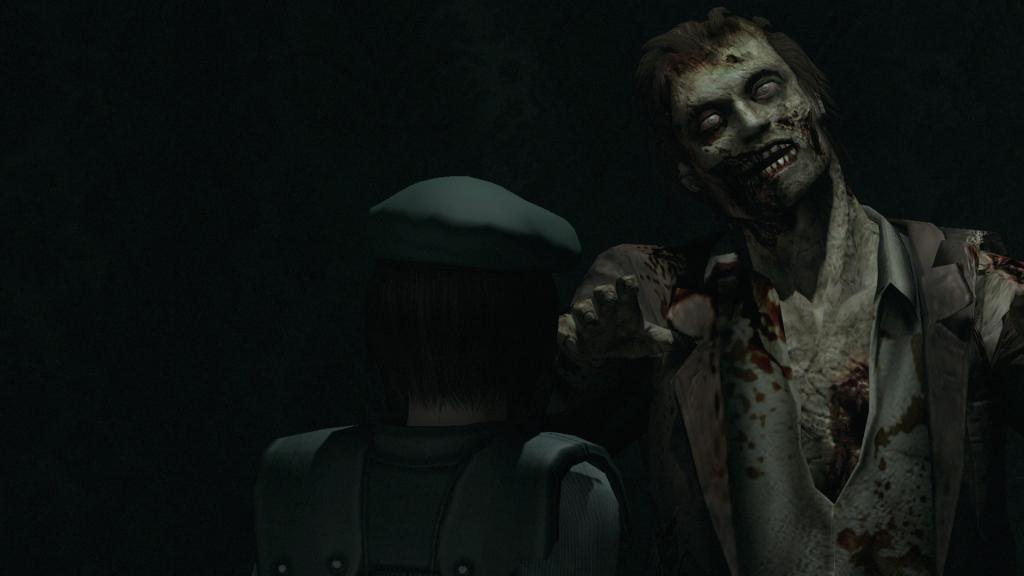 This is a cutscene rather than the combat. This isn’t Gun Survivor, thankfully.

So yes, that’s all wonderful. There are no obvious pitfalls that I can see – there are plenty of separate save slots, for instance, although yes the Ink Ribbon save system is still present so you do still have a limited number of actual saves – so it appears to be authentic, but with a number of much-needed little improvements.

I’m not going to talk too much about the actual game because I’ve only played it for about half an hour, but it’s as good as I remember. Some mildly silly voice acting (although as this is an HD port of the 2002 Gamecube remake, it does not use the utterly hilarious voice acting from the original), a genuinely creepy ambience, a bunch of highly daft puzzles, and the inevitable tension of never having quite enough ammo to feel safe.

If you’re a PC user who’s intrigued by Resident Evil HD, I don’t think you’re likely to be disappointed: the port appears entirely solid, and the game is… well, it’s Resident Evil. As far as fixed-perspective, low-ammo, silly-puzzle survival horror games go, it’s one of the best.

Fable Legends coming to Windows 10 PC, has Xbox One cross-play