Since Ryse: Son of Rome is heading to the PC on 10 October, I thought it might interest people to cover some of the graphics and control options offered by this version of the game. I’ll also be giving you an idea of how it performs, at least relative to my machine.

Speaking of, here’s the set-up I was using: i3-2100, 8GB RAM, 7870 HD (2GB). It’s getting a little long in the tooth, but it ran Shadow of Mordor at a fair clip with a mixture of medium/high settings so it’s not quite over the hill just yet.

We’ll get to shiny pictures of Romans soon, but first – graphics options.

Those are your basic graphics options. It’s perhaps no surprise to see an “upscaling” feature present in a game most closely associated with the Xbox One, ho ho and indeed, ho. But seriously, that’s not an option you tend to see baked into PC games so it’s an interesting inclusion.

Ryse apparently supports 4K resolutions out of the box, but that’s not something I could really test with my hardy 1080p monitor. You’ll notice that “supersampling” (SSAA) is present too. Ryse does this in 1.5×1.5 and 2×2 flavours for all your alias-banishing needs. Internally rendering at twice the resolution size would just tank my PC, but again it’s nice to have that option present.

Locking the FPS appears to just fix the game at 30fps.

And some more graphics options. Before I’d switched Motion Blur off, apparently.

Advanced options time. Pretty standard stuff in here, but it allows you to tinker around with stuff like Shadows and Particle Effects to sneak a slightly higher frame-rate if necessary.

For some reason the game likes to enable Motion Blur by default even when I tell it to switch it off (meaning I need to tell it to turn it off every time I load up.) I’m playing a review build of Ryse (pre-retail) so this may just be a lingering bug.

I’m not going to pretend I know what Temporal Anti-Aliasing really means, other than it’s supposed to reduce Temporal Aliasing. According to Wikipedia, that’s “caused by the sampling rate (i.e. number of frames per second) of a scene being too low compared to the transformation speed of objects inside of the scene.” So … yes. That’s an option. 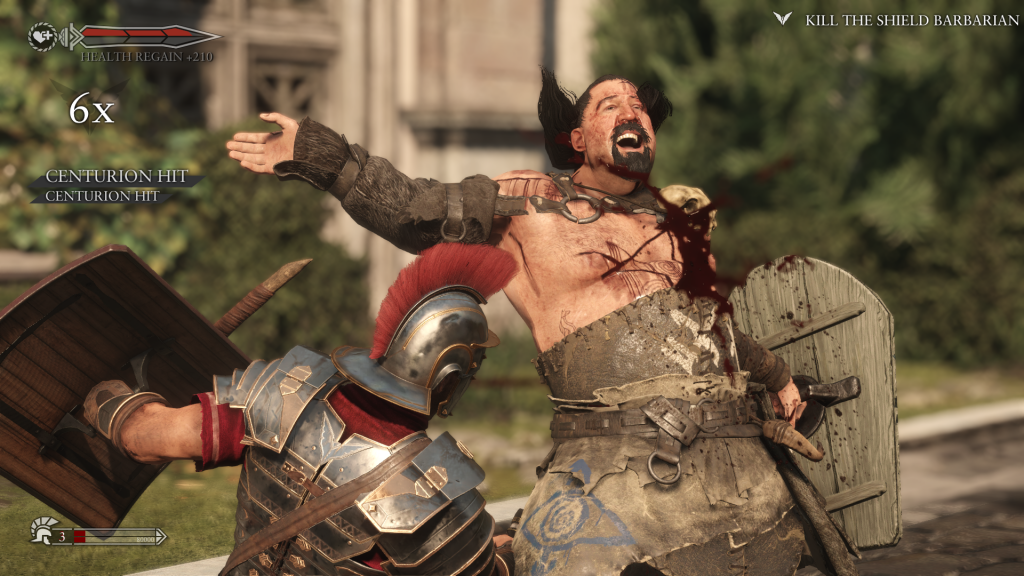 “I’m having a marvellous time being stabbed, hooray!”

In terms of what I’d have liked to see included in there, an FOV option wouldn’t have gone amiss. Ryse seems pretty narrow in that department, as you can probably tell from some of the images in this piece. That said, I played it for a good hour and a half without getting motion sick (something a low FOV can sometimes cause for me) even with spinning, stop-start, barbarian decapitation-o-tron camera work.

A quick word on controls too, because I was fully expecting to give up on mouse and keyboard within a couple of minutes and go straight for a gamepad. Instead, I found the mouse and keys set-up pretty functional. You can’t customise it, sadly, though there are two or three (slight) layout variations to choose from.

I’m not a huge fan of having the “dodge heavy attacks” button on Left Shift, but the basic WASD movement with left mouse to slash, right to shield-bash and space to dodge seemed serviceable.

This is the basic control scheme, which you can hopefully just about read. You have a couple more options but they don’t change a great deal.

Perhaps the only weirdness is the hold-over of colour co-ordinated timing cues. To pull off perfect “executions” you need to stab the barbarian fellows with the right button combos. With a controller, the enemies flash up a colour co-ordinated with the Xbox pad buttons. On PC, left mouse is apparently blue and right mouse is yellow. I’m not sure whether this means we only have two colours as opposed to (potentially) four for the Xbox buttons, or what.

It’s perhaps a little hard to tell, but this guy is shimmering blue.

So, on to performance and the like. I played through both busy and lighter scenes on the default low, normal and high settings and … honestly didn’t notice a huge variation in frame-rates between the three. This wasn’t an expert double-blind benchmark test or anything, I just used Fraps and kept an eye on the counter, but here’s what I observed at 1920×1080.

Default high kept me in the 30-45 range, normal was more like 40-50 and low was barely different from normal (40-55, at the most.) There were dips to the 20s, but only at very clear checkpoint/loading zones. To me, that suggests a bottleneck of some kind, and as it’s the weakest part of my machine I’m going to point the finger at the CPU. My i3 meets the minimum requirements for Ryse, but everything else is firmly in the recommended area.

Granted, everything still looks pretty lovely even on “low,” so perhaps there’s just not a vast difference between low and high defaults here, but I suspect my older processor is holding things back. That said, it is disappointing that I couldn’t squeeze out a 60fps under any circumstances, even with all the bells and whistles toned down or switched off. Again, I’m using a pre-release build here, so it’s possible things could change a little before the final release. I think it’s unlikely to alter very much though. This build looks and feels pretty finished.

Crytek may never have been the best when it comes to storytelling, but they can certainly do graphics. The screenshots dotted around here are a mixture of normal and high settings, taken while I was switching around between the two. When it came time to review some shots for this piece, I struggled to tell most of them apart. If you can spot any major differences through Steam’s default image compression, well done.

They also seem to be rather decent at non-creepy cut-scene faces (Alien: Isolation please take note.) Have a look at these fellows.

I take it back, Nero does look pretty creepy and weird. But he’s Nero, so that’s okay.

My Roman dad looks like he’s trying to tease some lies out of me. Fine! I took the chariot out last night. Jeez.

It does a nice line in animated mythology as well. I kind of wish more of the game looked like this next image, really.

Somebody make this game. Thanks.

I’ll hold off on further critique because a full Ryse PC review will be coming once I’ve actually finished the game. So far it’s mostly been a very pretty barbarian-slaying rhythm action game. It’s also a little bit patronising, popping up helpful tips like “remember you can block!” Yes, thank you Ry … “Levelling up is crucial to your success!” Right, yes, okay, Ryse, thank you.

You can spot the Chekhov’s Plot Item a mile away but, hey, it’s a Crytek story. I’m just happy nobody is whinging on about the Alpha Ceph.

Oh, and apparently in this alternative version of history Britannia is a “fetid land” and somehow powerful enough to send hordes of barbarian soldiers to sack Rome. Even in pretend history, Britain manages to be the baddies. Thanks for helping to uphold our national tradition, Crytek.

I’m almost certain one of the barbarian voices is Finchy from the UK version of The Office.

So, assuming my frame-rate is being CPU-bound (which I think it is,) Ryse should run relatively well on a PC that meets the recommended specs. If you’re closer to the minimum, expect to have to settle for under 60fps. It’s been perfectly playable for me at a fluctuating 40-50, and I much prefer that to a locked 30, though opinions may differ on that matter.

If you have a beast of a PC and a 4K capable monitor, the Ryse graphics options look as though they’ll cater to your desires to supersample into infinity (or 2×2, anyway.) One thing I’ve not been able to confirm though, is whether the frame-rate is completely unlimited. It’s a shame about the lack of any FOV slider and the lack of fully customisable keys, but those are the only complaints I can really bring in terms of options.

The full IncGamers review of Ryse: Son of Rome can now be read here.

Dota 2 gets Peru and Chile servers