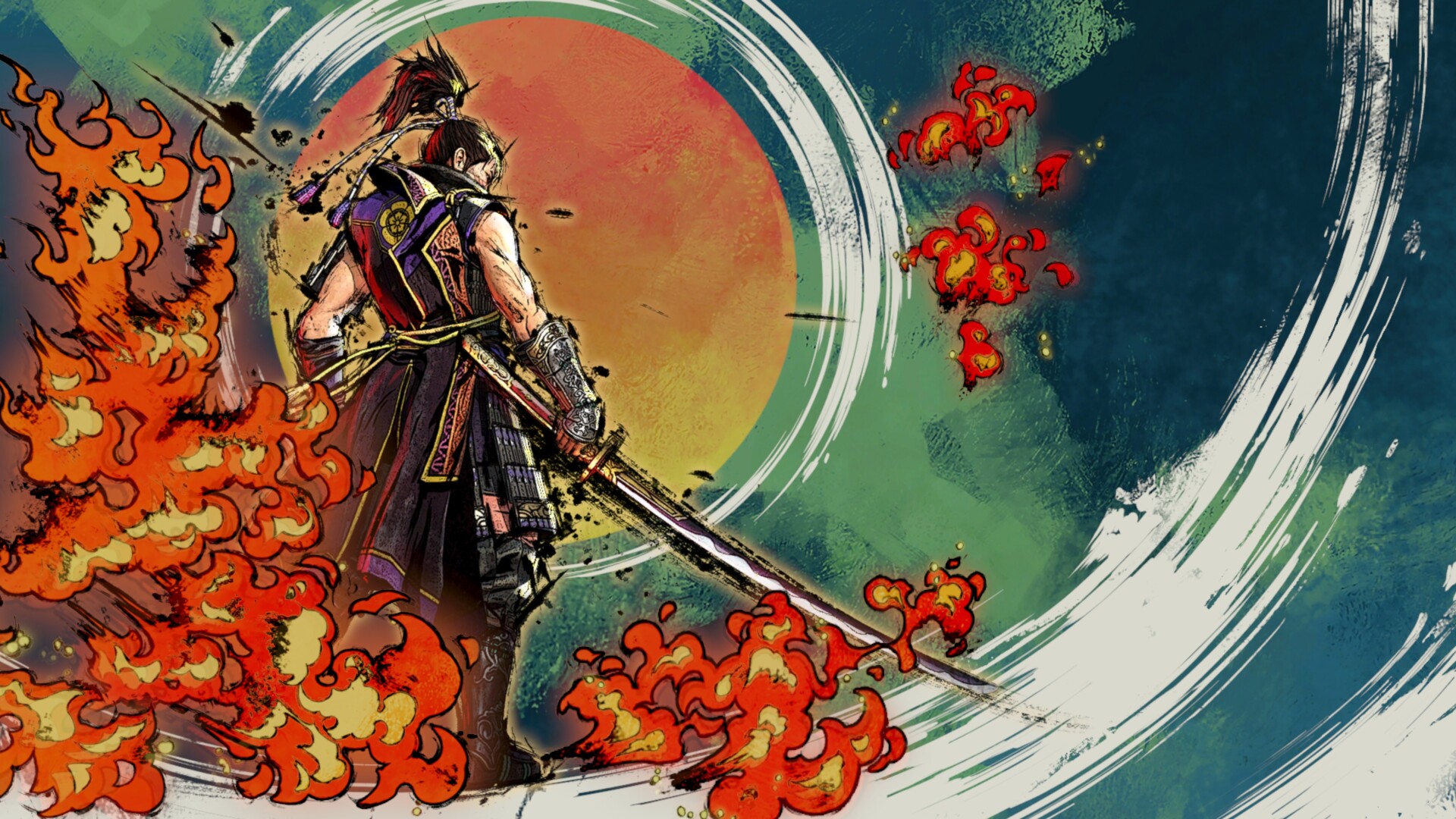 I was highly curious to see what Omega Force would do after the missteps of Dynasty Warriors 9. Samurai Warriors 4 has been one of my favorite games in the series since it came out seven years ago, and I was hoping that the developer would take some lessons from past mistakes and, at the very least, do what it did with SW4 again. When Omega Force revealed that it was basically rebooting the series, I was fine with that. New character designs, new takes on old ideas, etc. I was hopeful that Samurai Warriors 5 would cast off the issues plaguing the franchise.

Instead, Omega Force doubled down on one of its worst repeated design choices. Remember how upset everyone was with the cloned movesets in Dynasty Warriors 7? Remember how the fans were so mad that Omega Force ended up having to declone the entire cast for Warriors Orochi 3? Remember when it did it again in DW9, which is almost universally considered the low point of the entire franchise? Yes, we all remember that. Omega Force didn’t apparently take note of that, though, as it has done it again. If anything, it’s worse this time.

As you’re no doubt aware, this reboot has nearly 40 characters, which isn’t too bad, considering that the last game had 55. However, there are only 15 movesets. And only 27 of the characters have unique actions. Even then, many of the unique actions are underwhelming. Samurai Warriors 5 is mostly fine as a video game if you’re not intimately familiar with the series by this point. But, if you are intimately familiar, it’s an almost grievous problem in some ways. As for the new narrative direction, that actually works quite well. Everything else is something you’ve seen for years now, only with a fraction of the movesets you’re used to doing them with. 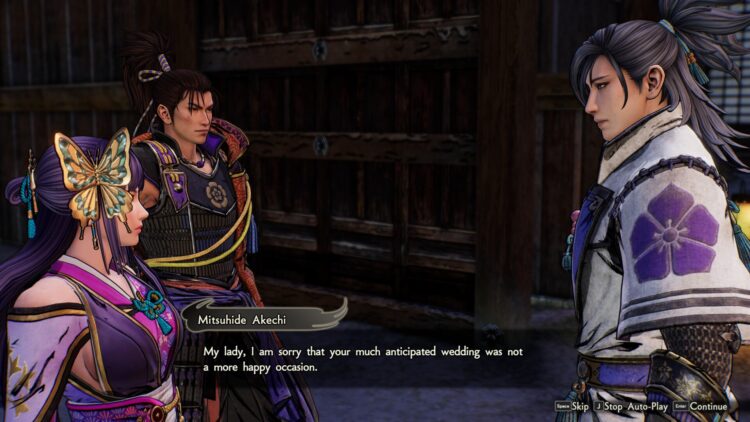 I have to say, I’m fond of Samurai Warriors 5‘s story direction. There are a ton of cutscenes this time, and even the conversational sections are much more interesting than they were in the previous mainline entry. The characters are more grounded and less preposterous, which makes this familiar retread of the exploits of Oda Nobunaga and Akechi Mitsuhide enjoyable. The game takes place during the time that the Oda clan strikes out against the Saitou and Imagawa clans and continues all the way up to the famous unceremonious betrayal at Honnouji.

The game focuses on chapters for both Nobunaga and Mitsuhide, offering a well-conceived, lively version of the story. Characters are younger here than they usually are in other games. Their portrayals are also less fantastical and more believable. For instance, Imagawa Yoshimoto has been a silly old man with painted skin and a love of Kemari for a long time. In Samurai Warriors 5, he’s burly and opposing. Nobunaga, Toyotomi Hideyoshi, and Tokugawa Ieyasu are all young. Some will undoubtedly miss the ridiculous anime flair the series had, but I’m always happy for solid changes when it comes to Musou games.

But that’s where the changes end. After the horribly received new combat system of DW9, Samurai Warriors 5 plays it as safe as can be, offering very little that’s new. The rush attacks and two-character system of the previous game thankfully return, but rush attacks no longer have their own charge attacks. The combat is exactly as you remember it otherwise. Attack strings, charge attacks, Musous, rage moves, it’s all present and accounted for. If you’ve played the previous game, you know exactly what to expect here. Omega Force has been extremely careful not to rock this particular boat. This is very much the same basic game we’ve been playing for a long, long time, only with the Ultimate Skills from Pirate Warriors thrown into the mix. These grant buffs and attacks on a cooldown. I didn’t care much for them in that game and I didn’t care much for them here either. 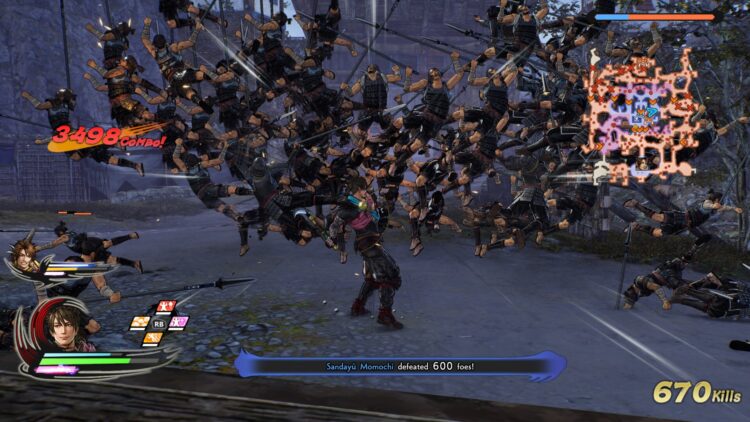 Stop with the stunning

Samurai Warriors 5 does look quite nice, at least considering how slowly the series has advanced technologically. The game is high-res, characters look good, levels are colorful, and the draw distances are okayish. The most noticeable change is that fodder mobs now exist in a less ridiculous fashion, and don’t tend to be incapable of standing near each other without freaking out. Battlefields also feel more alive, as you’re more likely to see allied mobs engaged with the enemy. This port is surprisingly good too, as it’s well optimized and has multiple options that’ll help you run it. I played at 4K and managed 60 fps without a single problem.

Enemy officers seem a bit tougher than I recall, though. They get hyper armor at weird times and love to hang out in groups, so it’s common to find yourself getting stunlocked or just plain stunned by their attacks. It’s annoying, and this version of the combat is insanely tired and dated at this point. While DW9‘s combat wasn’t good, I’m still getting kind of sick of how rigid and archaic the combat can feel. Omega Force really needed to update more than just the presentation here. However, if you simply want more boilerplate Musou combat and nothing else, you’ll get that in spades.

While the staleness of the combat is going to be fine for many, the lack of movesets really makes this one of the hardest games in the series to appreciate. There’s no good excuse for there to be only 15 movesets. That means that Samurai Warriors 5 has less than a third of the variation of its predecessor that came out seven years ago. And to make matters even worse, a lot of the movesets are just boring. For instance, spears and katanas don’t feel much different than movesets we’ve seen in the past. There’s very little to make them interesting. It’s the same stuff we’ve seen for years now. 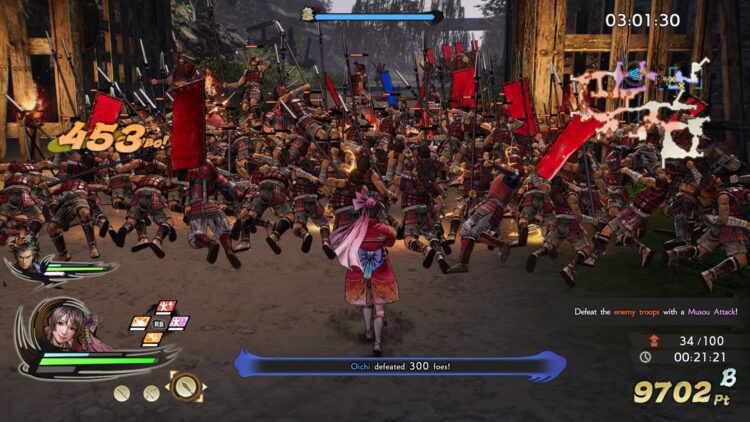 Gotta love that drum, though

It’s hard to get excited to play as Honda Tadakatsu when he plays almost identically to Maeda Toshiie. Characters do get unique moves that are just like the EX moves from DW7 though. Many of these are just as dull as everything else. It often simply isn’t even worth playing a specific character, because they’re so identical that the different charge attacks make no difference. It’s such a waste. Some of the weapons are quite fun though.

Takenaka Hanbei (and, well, every other character in the damn game, technically) fights with a drum now. Its C3 is so ridiculously overpowered that it’s funny. Hitting the drum creates little effects that hit enemies. It’s a lot like the musical weapons in other games. Oichi uses talismans that are also quite endearing as well. Ina’s not in the game, as her father is a teenager here. However, Noh (now often referred to as her real given name Kichou) is basically Ina now. She looks like her and the bow moveset is highly similar. The ninja sword is also a blast.

But I was so bored by many of the movesets that I mostly stuck to using the same few characters for most of Samurai Warriors 5. Astoundingly, the dual katanas moveset might actually be Zoro’s moveset from the Pirate Warriors games. I haven’t checked side-by-side or anything, but the animations and effects were all shockingly familiar. Which begs the question: why couldn’t Omega Force have made more movesets? I don’t know if it’s because the developer didn’t have time or what have you, but it’s disappointing no matter how you swing it. 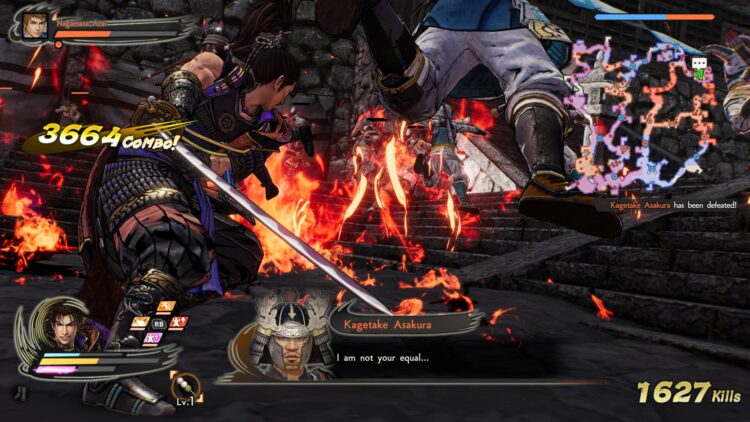 My house is my castle

As for the campaign, it’s business as usual. It’s broken into several chapters with main scenarios and side scenarios focusing on events tangentially related to the main camp. You know how this works without me explaining it. The Citadel mode offers some features similar to Spirit of Sanada. You go on five-minute missions where you can accomplish a few objectives and fight a boss. The better you rank, the more materials you’ll get. You can then use those to upgrade various buildings (that only show up in menus) such as the blacksmith, shop, and stables. Horses have levels and skills now too, for some reason. You can also train them.

The Citadel missions aren’t very good, though. They’re typical bite-sized Musou missions, except with a defense angle. But that usually doesn’t matter. Occasionally, I got one where the meter told me my defenses were crumbling, but I had no idea why. The Citadel missions are very short too, which makes the experiences feel small and constrained. Plus, grinding for materials isn’t fun, although giving out weapons and mounts for getting an S rank was a decent choice.

I still got some enjoyment out of Samurai Warriors 5, especially where the story is concerned. But honestly? Enough is enough. There’s no excuse for the lack of movesets and the almost complete lack of innovation. Longtime fans will no doubt still play this one, but the feeling of worthwhileness just wasn’t there for me. If you buy this game, you’ll get a familiar Musou experience, but there’s significantly better value in sticking to other games in the franchise. The bottom line is that this game is launching for the same price we paid years ago for games that had much more content on offer. And it’s a shame, because this one could have moved the series forward. Instead, the gameplay takes a big step back and your wallet gets hit just as hard all the same. 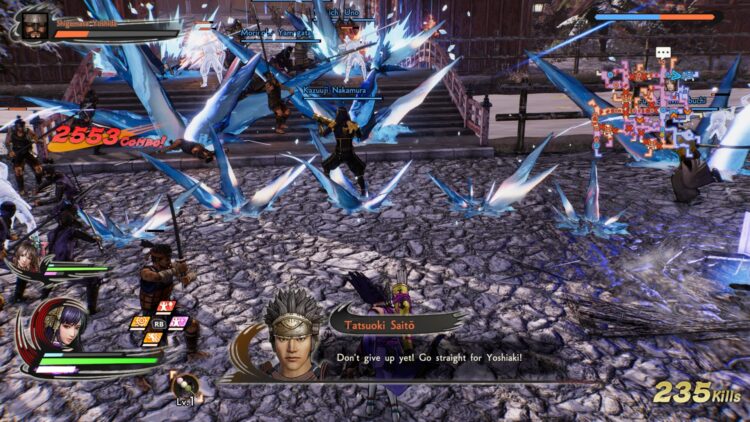 Samurai Warriors 5 runs well and has a solid story presentation, but it's barely different from the last entry in terms of gameplay, save for having less than a third of the movesets.