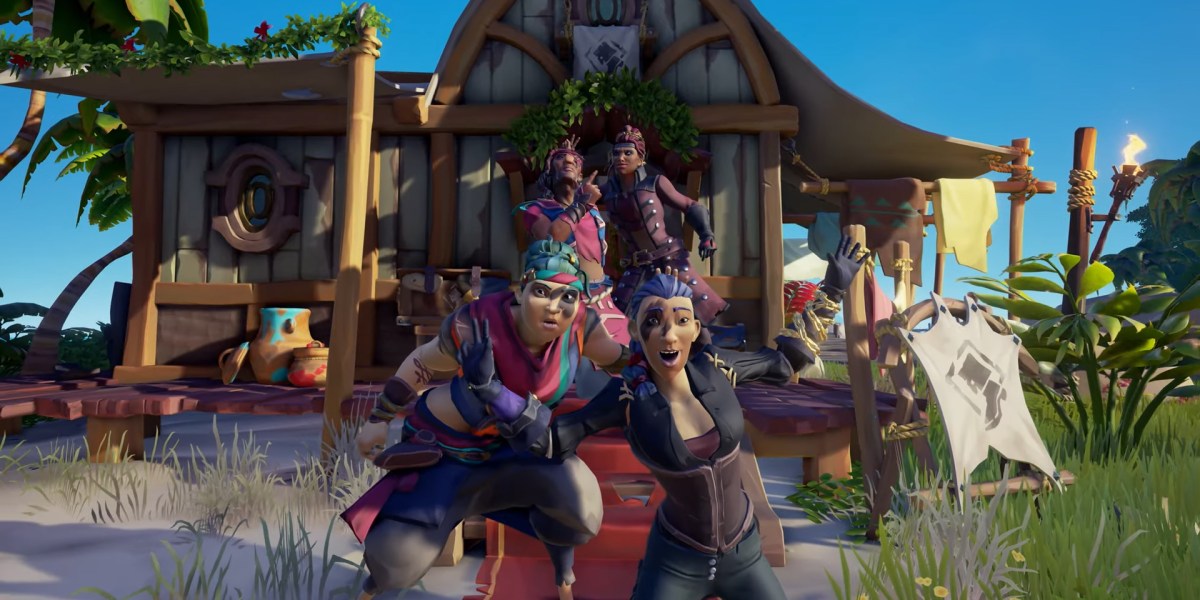 Rare has just announced that Sea of Thieves Season Five will set sail on December 2. A new season is always exciting, because it means a flurry of new cosmetics and collectibles. In Season Five, you’ll also be able to perform some new moves. However, the most exciting addition to the game has to be the ability to bury treasure. The list of new content in Sea of Thieves Season Five is long. So, let’s hop straight into it.

Any treasure item can now be buried in the sand with a few digs. That’s pretty cool, but it gets better. When you bury treasure, it creates a custom treasure map for the island you buried it on. That way you can find your loot again when you need to. Alternatively, you can also post your custom treasure maps on the new Quest Board found in all sea posts and outposts. If another crew completes your treasure map, you’ll receive the reputation you would have received for turning it in. Plus, a bunch of renown.

The Merchant Alliance is selling themed fireworks crates. They have a range of options, so make sure you sample them all. You can also pick up flares of different colors. These can be used to light up a dark area, warn your crew of danger, or just mark a location for a limited time.

As for the new actions I mentioned earlier, in Sea of Thieves Season Five, you will now be able to sit and sleep, with the latter slowly regenerating your health. If you find yourself using the in-game voice chat a lot, but don’t want to be overheard by enemies, you’ll be able to flip the speaking trumpet around for a sneaky whisper. Have I mentioned a rowboat with a cannon strapped to it is coming? I probably should have by now. Sneaky rowboat missions are going to be more devastating than ever — whatever their outcome.

The new season also includes another 100 levels of rewards for you to unlock for free. There are outfits, equipment skins, and some shiny golden sails for your ship. There is, of course, also a purchasable pass with some awesome glowing cosmetics. Pirate Legends can also get their hands on Merrick’s Tankard and Grimm’s Jacket. The four emissaries will offer some new cosmetic weapon skins for you to collect, as well as some legendary ship parts.

If you manage to complete all the commendations for Season Five, you’ll be rewarded with the Party Boat ship set, costume, and weapon skins. And, if you want to purchase some cosmetics from the Pirate Emporium, it will be stocked with new supplies in Season Five.

There are also some wonderful additions that will make your pirating smoother than ever before. Skeletons wielding guns will now drop ammo pouches, which refill your ammunition. Loot dropped by megs and krakens have new markers to help you spot them more easily. Plus, rats will now scamper about your ship. If you see them running up from below decks, you best check why. Finally, transferring loot between storage crates will be quicker. Hallelujah.

Don’t forget, you can currently earn Halo cosmetics in Sea of Thieves, with a set of sail becoming available from December 1.

By Jack Salter4 hours ago
News

By Leo Gillick6 hours ago
News

By Matt Henzel9 hours ago
News