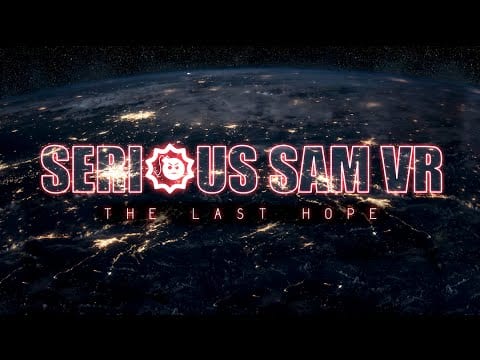 Devolver Digital has announced Serious Sam VR, which I was initially concerned would be the ultimate VR motion sickness simulator. However, it’s a static shooter (Sam will be locked in place), so that should help mitigate all that.

It is the period of the first Mental War. Earth’s defence forces are crumbling under the hordes of the vicious Mental. He managed to break the will of many nations by destroying the ancient shrines of the domestic people, but fearless EDF general, Sam ‘Serious’ Stone, is leading the resistance from the battlecruiser ‘BC Saratoga’ in a desperate attempt to save the galaxy…

The game will feature multiple levels set on multiple planets and feature the type of action fans would expect from a Serious Sam game including insane bosses, mental tools of destruction, which will include new weapons, and of course dual wielding shotguns. Between missions, players will be able to upgrade weapons on the Saratoga battlecruiser with in-game currency. That does not mean microtransactions in case you were wondering.

Due to appear on Steam Early Access this summer, Serious Sam VR will be compatible with HTC Vive and Oculus Rift. However, it’ll need motion controllers, so Oculus users will need to wait until those are actually available.

In it, you’ll be gunning down the usual waves of yelling, growling, and snorting Sam enemies across a selection of locations (including the classic desert, judging by the trailer). Here’s the video and shots.

Gears of War 4 coming to PC, has cross-platform multiplayer

By Sam Robins58 mins ago
News