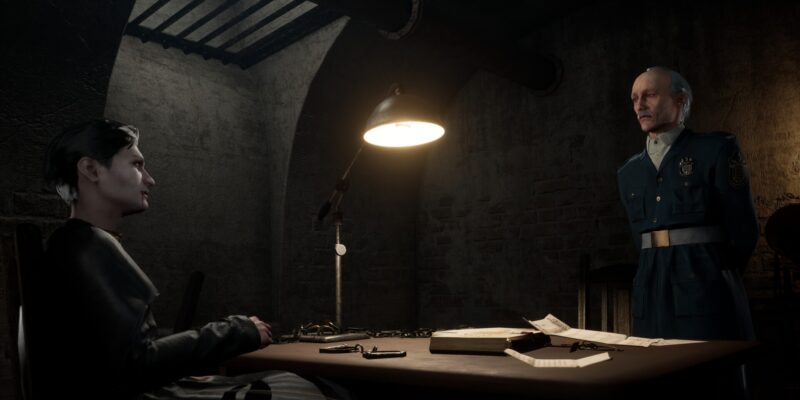 You’ve just attended a party that turned out to be a pagan ritual. Now, a man named Fabio is dead and everyone got arrested. Here’s our Sherlock Holmes Chapter One Sacrificial Lamb guide to help you interrogate the prison suspects — Kurt Manchios, Matista, and Santos Pinchetti — so we can conclude our investigation.

Compared to all the other investigations in Sherlock Holmes Chapter One, this sequence with Sacrificial Lamb prison suspects is fairly limited. Everyone’s in a single area (Cordona Police Station), and you’ll mostly go around presenting evidence. When you show the evidence to these suspects, their responses will be noted in your casebook. Subsequently, new findings will also appear in your Mind Palace.

Some important clues include the documents left by the constable, the keys and letters in Santos’ cell, and the ones in the evidence room. For the Santos info, make sure you have “Santos is a Suspect” pinned, then talk to the constable in the archives room. Likewise, to access the evidence room, you should have “Evidence Ticket” pinned. Exit the jail and go to the opposite hallway to find it.

Talking to the constable about Santos

Again, you’ll just go back and forth to talk to the suspects. Eventually, the Mind Palace will be full of clues. Certain combinations of deductions will tell you why the suspect may have killed Fabio:

The decision on what to do with the Sacrificial Lamb prison suspects in Sherlock Holmes Chapter One is entirely up to you. In the end, Vogel will have a short chat with Sherlock. The constable will also give Sherlock the files regarding his mother’s death, which means it’s time for us to reach the finale and endings.

Sherlock Holmes Chapter One — A Mother’s Love finale and endings