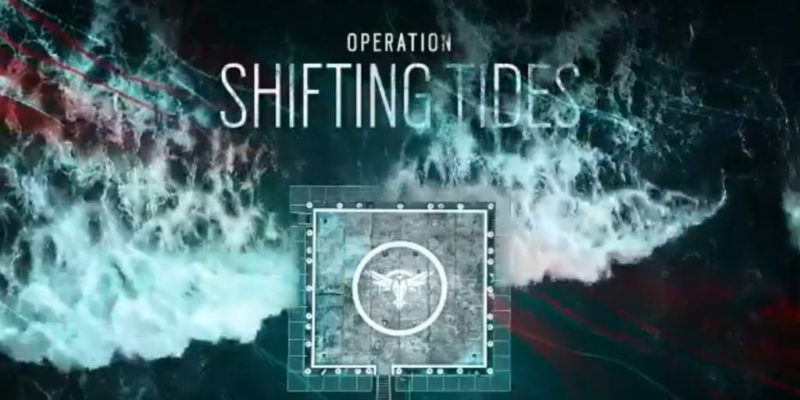 Rainbow Six Siege‘s fourth year of content is coming to a close. The first three seasons – Operations Burnt Horizon, Phantom Sight, and Ember Rise – have been well received for the most part. While the newer operators have had trouble fitting into the meta, the incredible in-game events have highlighted Siege‘s better quality this last year. This final season looks to shake things up a bit. It is titled Operation Shifting Tides.

The waves of change are on the horizon. pic.twitter.com/u35vfp71K2

The announcement of the final Year 4 season’s title comes hot off the heels of the end of the Halloween Doktor’s Curse event. The game’s official Twitter shared a brief video unveiling Shifting Tides’ name this morning.

The current official details don’t go much beyond the name, but we do have some long-standing rumors and confirmed tidbits.

First of all, the game’s only spooky map, Theme Park, is getting a rework. We don’t know much about how the map will change. However, previous reworks like Kafe and Kanal have vastly improved on the originals.

Also confirmed is a full-sized battle pass. This was tested during the current Ember Rise season with the ‘Call Me Harry‘ mini battle pass. The first attempt had players gaining points via rounds won, matches won, and matches lost.

There was a lot of demand for Ubisoft to also grant points based on kills and assists. We’ll have to wait and see if those changes end up in the full release. The phase 2 battle pass will feature both a free and premium reward track, with cosmetics and in-game currency boosters up for grabs. One thing is for certain: if this battle pass is successful, it will likely be in every subsequent season. Ubisoft loves a cash cow. At the very least, you shouldn’t have to worry about as many cheaters slowing down your progress after Ubisoft’s recent lawsuit.

What we don’t know for sure

The operators joining the fray in Shifting Tides won’t be from the same military unit. As confirmed by the Year 4 Roadmap Ubisoft put out, the first will hail from a Kenyan unit, while the other will be from an Indian unit. Word on the street is that these operators will offer alternatives to established characters Glaz and Jager.

The attacker Indian operator is rumored to be running a bolt action sniper rifle with a secondary weapon loaded with EMPs. The defender Kenyan operator, on the other hand, will place a device that will physically pull grenades towards it for safe detonation.

These details are not confirmed, so take them with a grain of salt, but the source has been accurate before.

While we don’t know exactly when Shifting Tides will drop, we can make a pretty accurate guess based on past patterns. For instance, Ember Rise, the current season, debuted on the game’s test server back on August 19. It made its way to the main servers three weeks later on September 11. Each season lasts roughly three months. This sets Shifting Tides up for a mid to late November test server launch, with the full release probably hitting in early December.

More information on Shifting Tides is likely to come out this weekend. The Rainbow Six Pro League Finals are set to run from November 8-10. Historically, this is where all the details are spelled out for upcoming changes and additions. Until then, sit back and enjoy the fact that a game published almost five years ago is still getting new content.