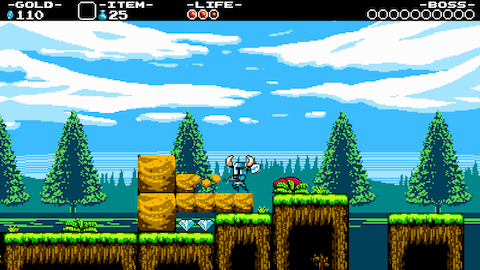 Shovel Knight an Indie platform game by developer Yacht Club Games for the Nintendo 3DS, Wii U, and PC Steam is now delayed from its March 31 release date announced today on their Kickstarter page, no new date given.  Shovel Knight is being directed by former WayForward Technologies member Sean Velasco.

“Hello Shovelers and Shovelettes! There are only a couple weeks until Shovel Knight’s release date of March 31. The crew at the Yacht Club is tired; we’ve been working literally every day, and every waking hour, to make the game great. But! We’re just not quite there yet. So, we hemmed and hawed, and made a Super Important Executive Decision. This update is to let everyone know that Shovel Knight will be missing March 31 by a few weeks to make sure it’s a world class experience, and can release on all platforms simultaneously. This isn’t a major delay, or a long one; it’s simply a stretch of time to get everything polished and aligned. While major development is quickly drawing to a close, there are still some external factors, like submission preparation, which need a little bit more breathing room before the game goes live. ” Source Shovel Knight Kickstarter

Dark Souls 2 Lighting Downgrade: Should We Expect the Same on PC?