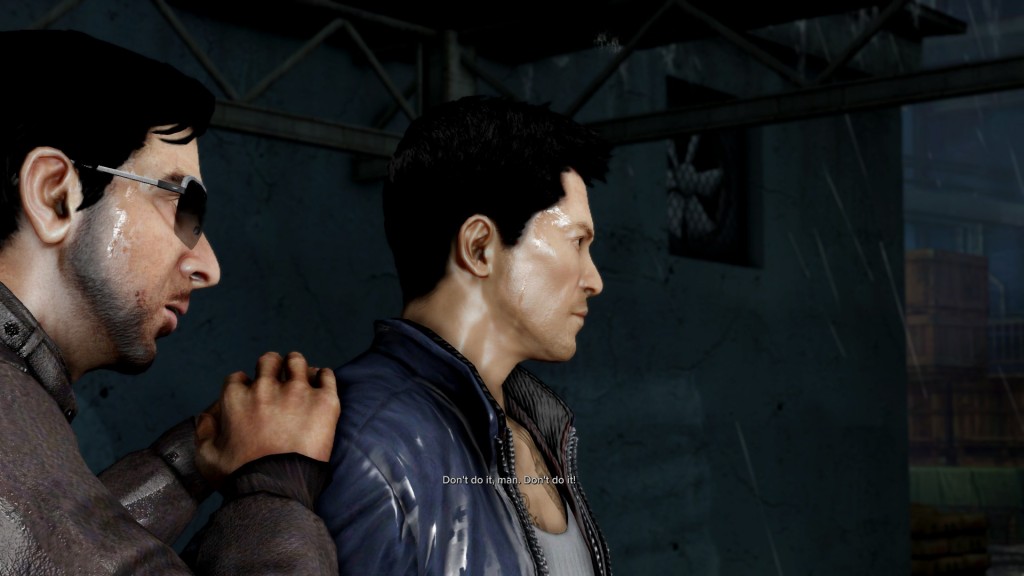 I have to. Sorry, but it’s time for another analysis piece about a PC port.

Good grief, but we’re doing a lot of these impressions pieces at the moment. I’m perfectly happy to do them, but it’s not really a conscious choice – it’s just that there are a lot of multi-platform PC versions coming out (and we didn’t get code early enough for a full review before launch), or older games are getting brought to PC or re-released! And today, it’s Sleeping Dogs‘ turn.

Sleeping Dogs: Definitive Edition makes me feel a bit weird. I’m happy that Sleeping Dogs is getting a prominent second chance with the public because the tale of Wei Shen – a cop undercover in a Hong Kong Triad – is interesting, well-written, and packed with enjoyable mechanics, and yet it was at best a sleeper hit (sorry) when it first launched. But on the other hand, this re-release is one that definitely seems focused at the console crowd, so is it really worth it for PC users? 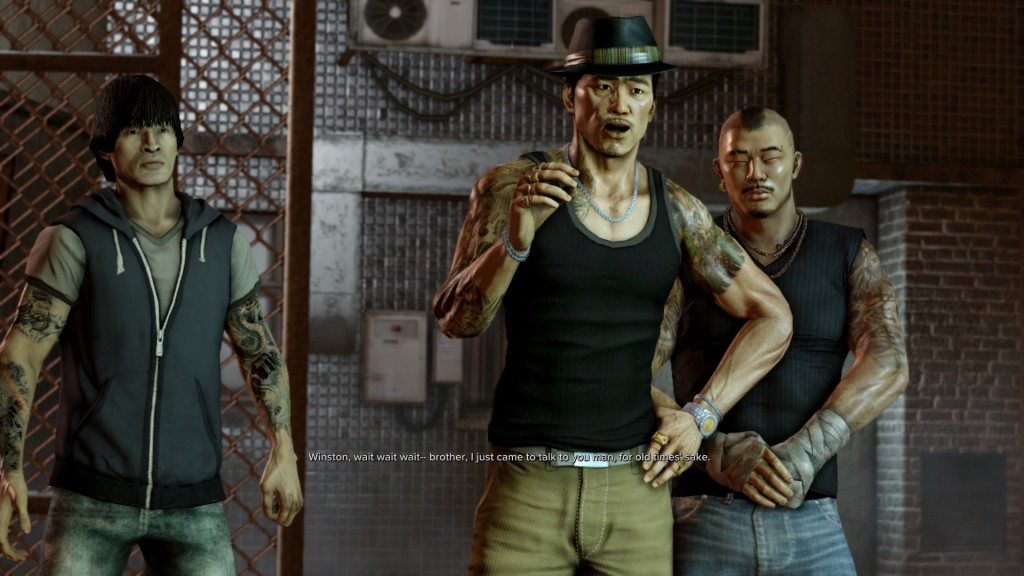 See, one of the big things about this re-release is that it touts major graphical improvements. On console, that’s understandable – Sleeping Dogs: Definitive Edition is only available on Xbox One and PlayStation 4, so there’s bound to be an increase in graphical fidelity over the previous generation consoles. But on PC? We already had an optional texture pack that made everything look stunning, which made me wonder what this £20 game (or £10 upgrade) has to offer for someone who already has all the DLC.

First things first: the install footprint. Sleeping Dogs apparently takes up about 11.7GB on my hard drive, while Sleeping Dogs: Definitive Edition is gobbling up 17.2GB. I have absolutely no idea what’s taking up an extra 6GB – over half of the original game, even with the DLC installed! – but I suppose that says something. Higher-res textures, maybe? Extra visual assets and voice acting? In all honesty, I have no idea. 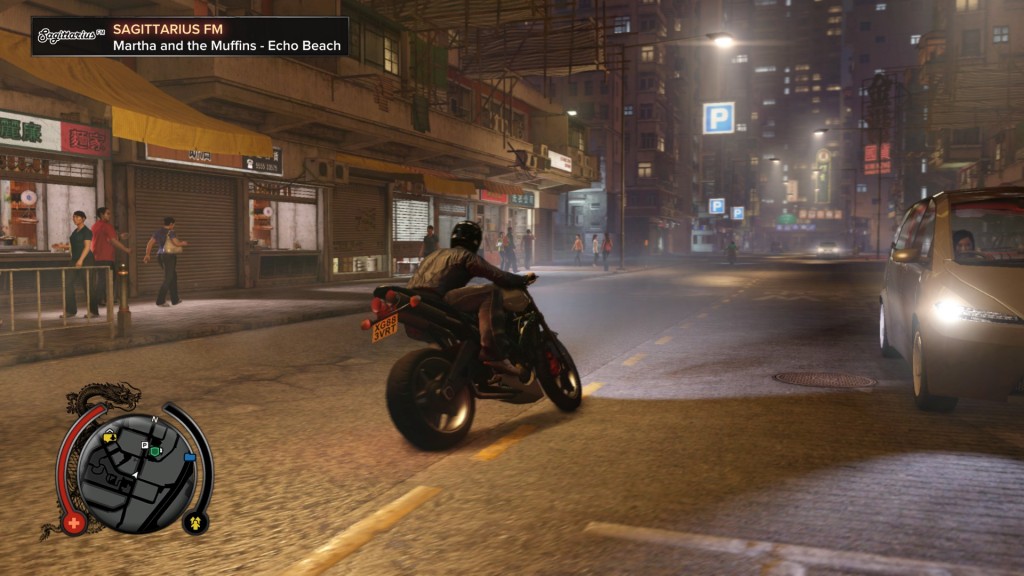 Echo Beach is still on the soundtrack. That’s the most important thing.

So let’s have a look at the game itself, and its actual options. First things first: the interface actually seems to be improved, in menus at least. Not in a major way, and it’s something I can’t really describe with any great ease, but the menus feel more responsive and “PC”. It helps that the navigation keys have been rebound to make things a little more sensible and fluid.

The graphical options are basically the same as before. No great changes there, except that the “Enable high-res textures” option has vanished; this isn’t really a big surprise considering the promised graphical improvements. I suspect there’s just the one texture set for Sleeping Dogs: Definitive Edition. There’s also a “Low Resolution Buffers On/Off” setting, and I have no idea whatsoever what that does. Puts in low-resolution stuff as a buffer while it’s loading the high-resolution stuff? No idea! 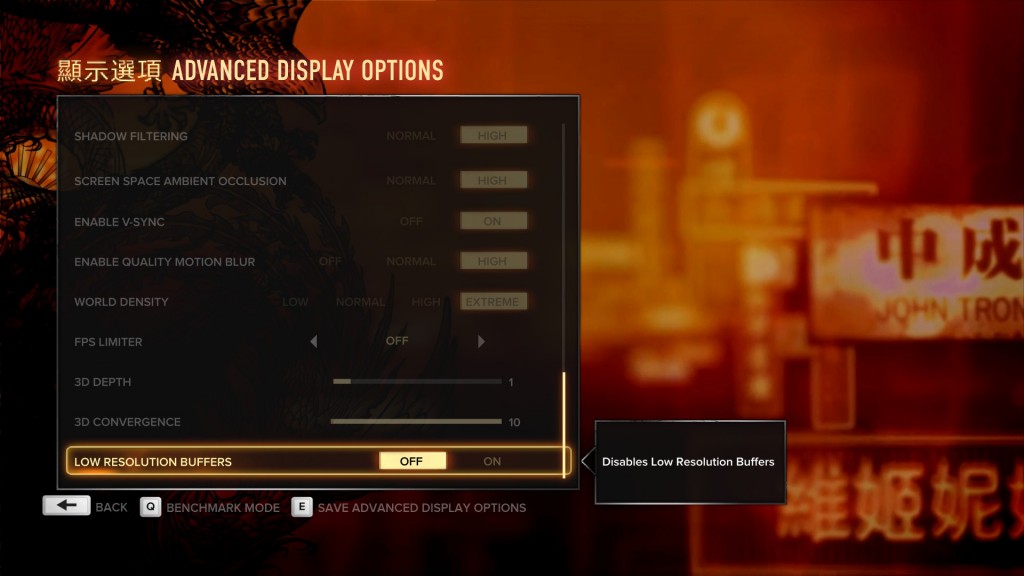 Now, onto something a bit more interesting: the benchmark. Both games have a benchmark tool in the Advanced Display Options, and this actually lets us do some side-by-side comparison shots. You can’t get perfect matches, because different NPCs will load into different places and perform different actions, but you can get some damn close pics of the environment.

For what it’s worth, I spent awhile trying to set up the display options to be the same between both games. The pics below are taken with Quality Anti-Aliasing at High, Shadow Resolution at High, Shadow Filtering at High, SSAO at Normal, V-Sync on, Quality Motion Blur at High, World Density at Extreme, the FPS limiter off, and (in Sleeping Dogs) the High-Res Textures turned on.

So, here’s a night-time shot from the benchmarking, from both games. Sleeping Dogs is at the top, and Definitive Edition is below, and I’m about 99% sure these are taken with the same graphical settings. (I’d like to be more accurate, but I took a lot of screenshots at different settings.) 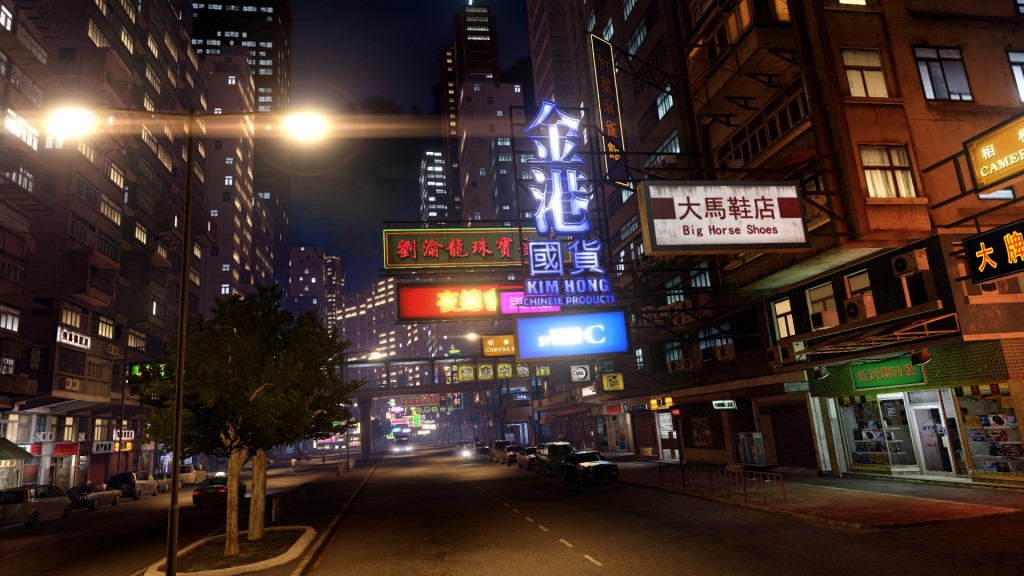 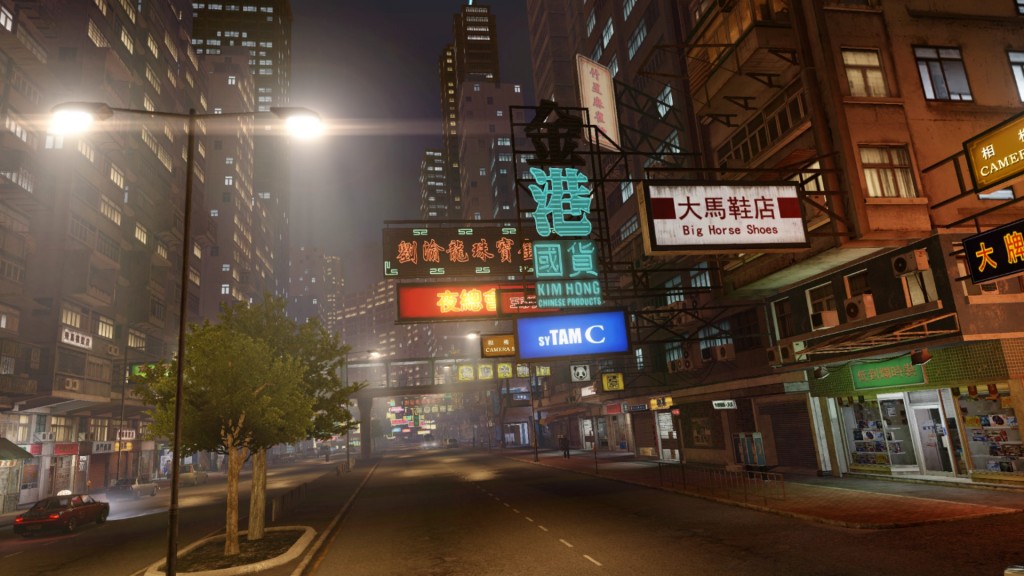 The big difference is the lighting, with Definitive Edition having more of a soft glow coming from things like the streetlights. That said, there are a few things the original game “seems” to do better – the sign directly above the shop entrance on the far right looks a bit sharper in the original, but that might simply be because it’s lit, and thus it has the soft blurring effect from lighting in Definitive Edition. Some of it’s a matter of pure taste, though. I prefer the general effect of the way Definitive Edition looks, but I imagine there are those who’ll prefer the original.

The new effects don’t seem to adversely impact performance, though. The benchmarking results are below. Again, Sleeping Dogs is at the top, and Definitive Edition is below. 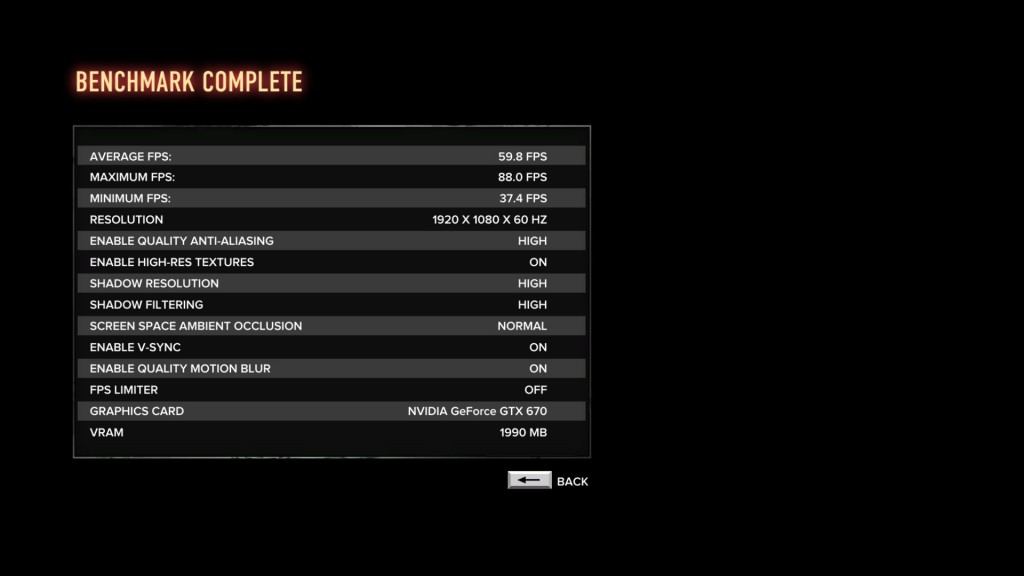 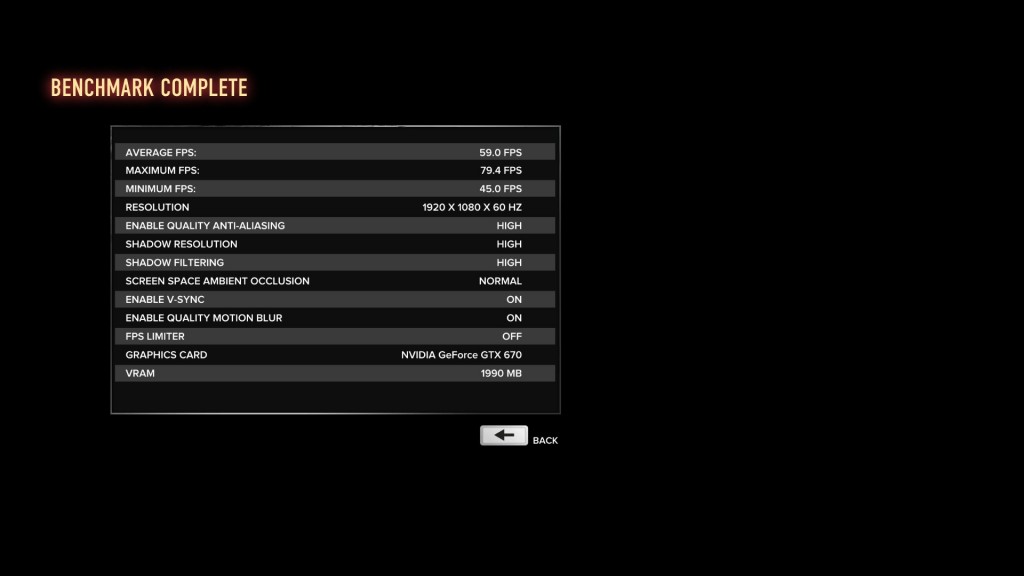 So the original game dropped lower, but also managed a higher maximum FPS and a higher average FPS… by 0.8. As far as I’m concerned, though, the two are practically identical: at my chosen settings neither drops into unplayable range, and both maintain roughly the same average framerate.

There might be an argument that Definitive Edition is slightly better optimised, in fact. If I put SSAO to High and disable V-sync, then we actually wind up with… 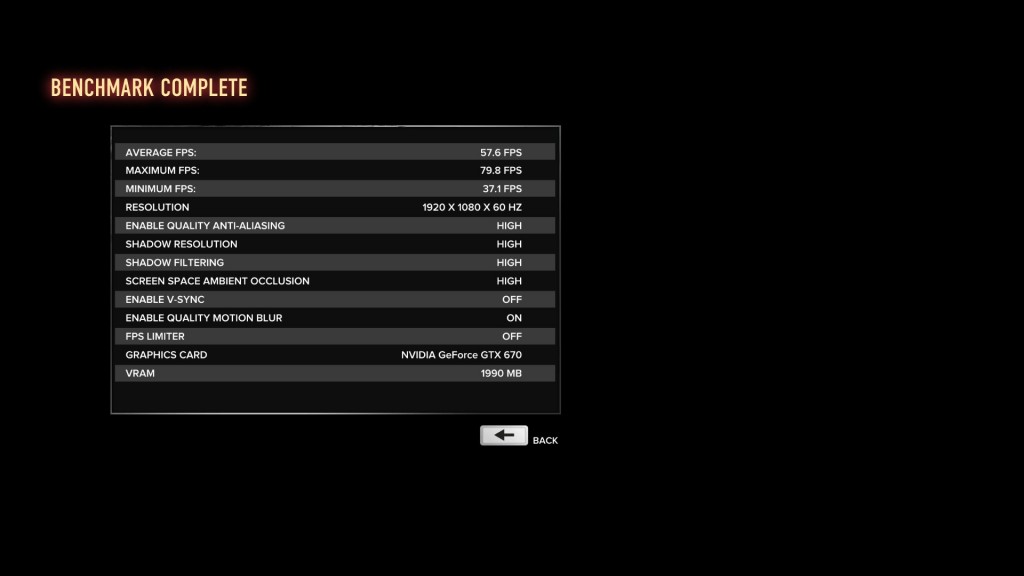 …benchmarking that’s really rather similar to the original game. Minimum FPS takes a hefty hit but Maximum actually goes up, and the average doesn’t drop by much. On the other hand, I can’t see much of a visual distinction between SSAO on Normal and High.

It’s worth noting that these were never intended to be super-scientific benchmarkings, mind. My computer was almost certainly doing stuff in the background, which may also account for some of the numbers. All I can really say is that Sleeping Dogs was at the settings I found playable, and then I matched Definitive Edition to those. 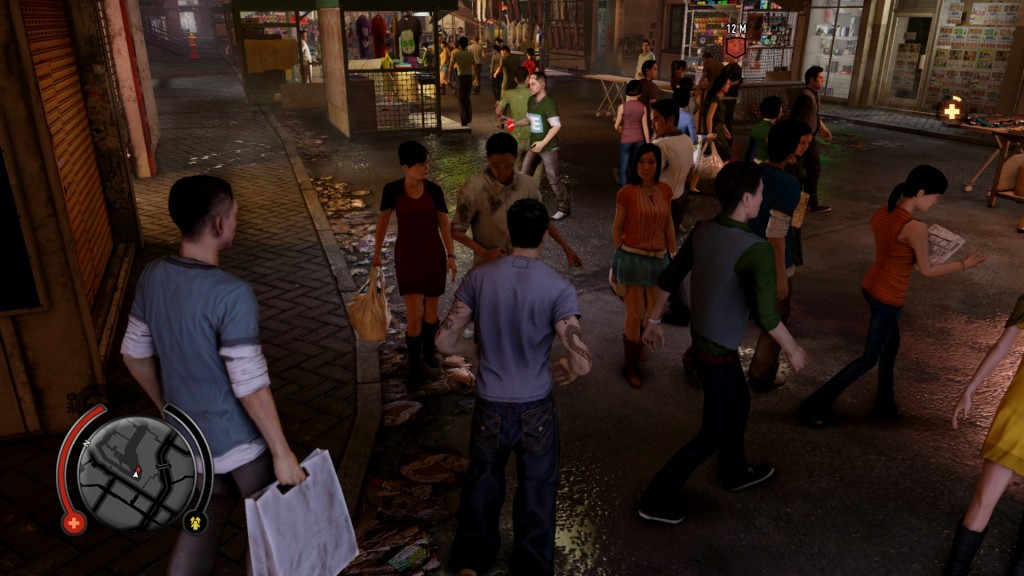 I can’t say for sure that the streets are more crowded, but the Night Market seems a little busier than before.

Right, enough pissing about with that. What about the game?

Well, in another incredibly unscientific way, it feels a bit better. I’m fairly sure the streets are more crowded, there’s more variety between pedestrians, and possibly even a few new bits of ambient dialogue. (Don’t quote me on that, though: it’s been a year since I last played Sleeping Dogs for any length of time.) 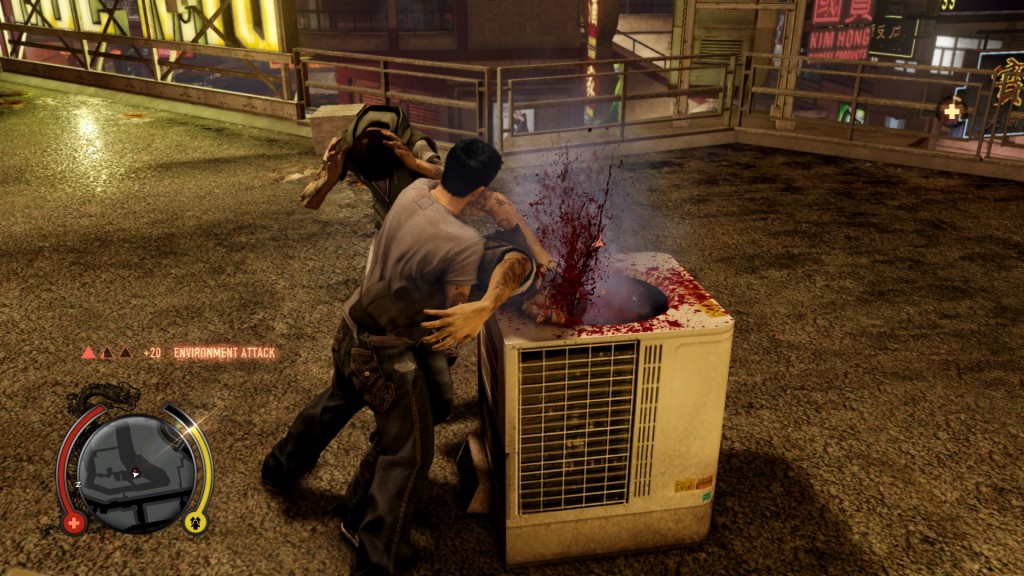 I can guarantee it feels better than this, at least.

The default PC controls are significantly more sensible, at least. Your run key is now bound to shift instead of space. Counter-attack is now E instead of the right mouse button, with said button now a lock-on button you can hold down to focus on one particular enemy. The counter change has actually screwed me up a lot, but that’s probably just me. This also means that your “Use” key is now E, which makes a hell of a lot more sense for talking to people, entering vehicles, and the like.

The DLC also seems to be integrated much, much better than before, too. Previously the Sleeping Dogs DLC was a wee bit game-breaking, giving you access to a vast amount of experience, clothing, and vehicles instantly, which rather devalued the game’s Hong Kong Dollars because you rarely needed to pay for anything. Now it actually seems to be integrated into the game itself, with bits and pieces unlocking as you progress through the storyline, and I think a few bits have been moved to shops. Again: it’s been awhile since I played the original, and I’ve only spent a couple of hours with Definitive Edition, so I can’t be entirely certain. I can be certain that your closet doesn’t start with 20,000 bits of clothing in it, though. 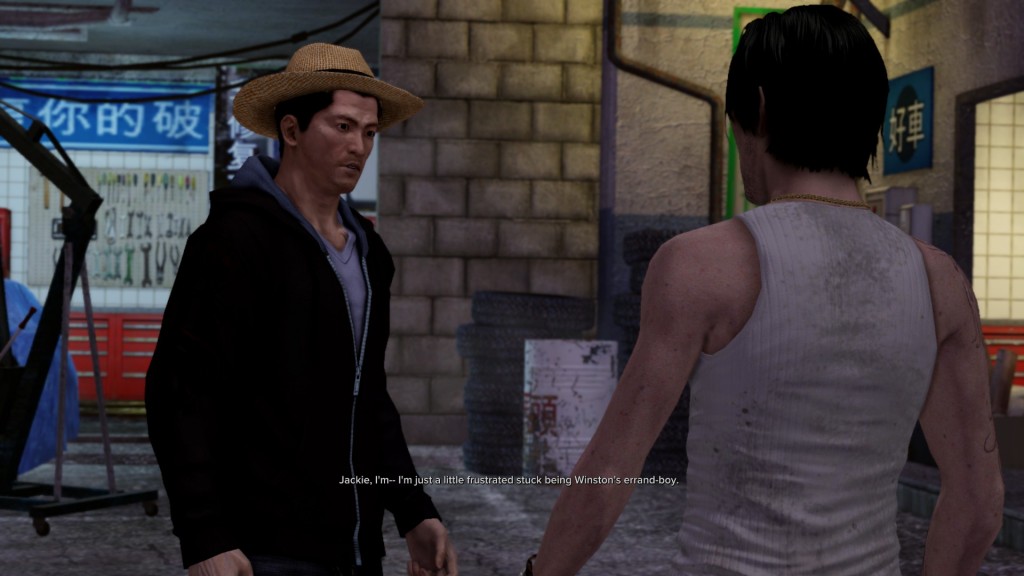 Don’t worry, though. It’s not long before you can make Wei look completely ridiculous.

Unfortunately, it’s not all good. Sleeping Dogs: Definitive Edition has one big problem, and that’s bugs.

As I said, I’ve only spent a couple of hours with Definitive Edition, which is why it’s a bit worrying that I’ve already spotted a lot of little issues. Two cutscenes completely lacked all subtitles, which was a bit of a problem since – for one of them – the dialogue was all in Cantonese. Another cutscene had Wei frozen in place, unmoving, and the scene ended with people walking through him, and I’ve also seen pedestrians endlessly walking into walls and obstacles. Again: after two hours play, the fact that I’ve seen so many issues is really rather worrying. 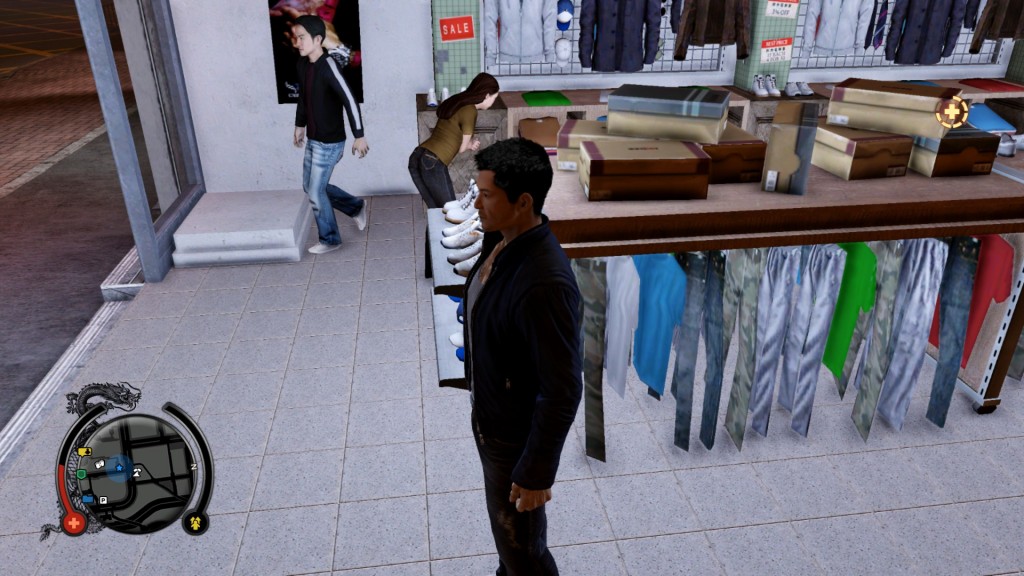 That guy in the background spent quite awhile walking into the little raised bit.

If you haven’t played Sleeping Dogs, then I have absolutely no problem in recommending Definitive Edition to you. Despite having a few flaws and issues, it offers improved controls, an interface and HUD resolution that’s more appropriate to PC, some graphical effects that I personally like (although they’ll almost certainly prove divisive), and proper integration of the DLC packs into gameplay. £20 for an improved Sleeping Dogs plus all of its DLC is a really good deal, not least because it’s such a fine game.

If you already have Sleeping Dogs, things are a little trickier. If you have Sleeping Dogs in your Steam account then the price is halved, so Definitive Edition is only £10, but it’s really a question of whether or not you want to play Sleeping Dogs again any time soon and whether you think these improvements are worth £10. I think they are, but then that’s me – you might think that a few graphical changes and a few generalised improvements aren’t necessarily worth the asking price, and I can’t really blame you for that.

By Cameron Woolsey11 hours ago
Features