Sniper: Ghost Warrior Contracts features several loadout options and sniper rifle modifications. While many are available via the cash you obtain from missions, some will require various tokens. Contract tokens come from main objectives, challenge tokens come from completing challenges in maps, and intel tokens are from collectibles or bounties that you tackle. As such, you could end up spending tokens for weapons or gadgets that you won’t need. This loadout guide aims (pun intended) to help you make the ideal choices all throughout the game.

Note: You can also view our character skills and perks guide. Likewise, for more information about the game, check out our Sniper: Ghost Warrior Contracts guides and features hub. The key to determining the ideal loadout involves being certain of what works universally and what doesn’t. Yes, your default loadout in Sniper: Ghost Warrior Contracts will last you until the end of the game. But, there will be times when some changes are needed, and there might even be challenges that require you to unlock new gadgets or perks first.

Another concept is understanding what works against certain enemies and choosing skills or loadouts that’d be effective: Below, you’ll see the loadout I’ve been using after finishing the campaign and while redoing challenges in Sniper: Ghost Warrior Contracts. Some of these (drone, turret, gas mine, and adrenaline shot) do require challenge tokens in order to be unlocked.

I’ll get to the sniper rifles in a bit. As for the secondary weapon, you can choose between a few auto rifles or shotguns. You can’t equip silencers on any of these, so you want to go with the Hunt AR65 which has the highest noise reduction value.

Sidearms come in light or heavy flavors with differences in damage, recoil, and noise reduction. The Rotweil M23 is a light pistol. It also has the highest base noise reduction out of all the sidearm choices. You can also purchase a silencer for it. As for gadgets, the MUAV Dragonfly is immensely helpful. Your drone allows you to tag targets and get the lay of the land while sitting cozy in a hiding spot. It does run out of batteries, and, if you direct it too far away, you’d lose its signal. Still, you can use it from time to time. The drone will only alert enemies if you clumsily wave it around in their face.

The RWS SR50 sniper turret is also quite nifty to have. With a few upgrades, use your binoculars and press “H” to tag multiple enemies. Then, hit “G” to shoot them — you can even do tandem shots when you fire with your own weapon. It’s perfect for sneakily clearing out bases. The turret can also be of help if you want to do a cheese to easily farm cash. The rest of the gadgets are a mixed bag, really. Frag grenades and medkits are available by default. You won’t really need them too much if you’re playing carefully. Deployable items (gas mines, anti-tank mines, warning devices, and decoy traps) are almost completely useless. I’ve never felt the need to use them. Lastly, some challenges will require you to unlock and pick specific gadgets (ie. gas enemies, blind enemies). Note 1: Gadgets that you haven’t unlocked yet (minus the drone and sniper turret) can be found in various stashes in each map. If you’re saving up on tokens, you should only unlock the ones you’d need for specific challenges.

Note 2: Although not shown on Sniper: Ghost Warrior Contracts‘ control options, gadgets can be used by pressing the “F” key or the right shoulder button (RB).

Update: The day-1 patch added DLC weapons such as the SV Amur sniper rifle and Sturm – Bodyguard pistol. There seems to be a problem with the latter because its model’s bugged when inspected in your loadout screen. It currently appears as a big, red ball. Don’t worry, though, because it works fine once you’re in a mission. I’ve already reached out to the developers to report the matter. In any case, Happy Red Nose Day, I guess? Naturally, we’ll need to talk about the best sniper rifle in a sniping game. There are two kinds: light sniper rifles and heavy ones. As mentioned, you’ll need heavy snipers if you want to take out armored troopers (and even vehicle weak spots) in a single shot. Given the high damage, heavy sniper rifles can also kill with body shots or dismember limbs.

However, most heavy sniper rifles tend to have a slower rate of fire or lower noise reduction. Alternatively, you can still go with the basic light types (which includes your default weapon), but you would need to spend intel tokens to unlock the special ammo magazines (those AP rounds can be important versus armored soldiers). Even then, some rifles won’t let you choose AP bullets which can be a downer.

As for scopes, most sniper rifles will have a couple of additional options. Magnification/zoom level is the most important, especially when taking out targets from further away. Distance calibration should also be taken into consideration so as to give you more options when aligning your shots with the Dynamic Reticle System (DRS). Your default sniper rifle already comes with a silencer, and it’ll last you until the end of the game if need be. It does have a slower rate of fire since you’re chambering another round after you shoot. You’ll need to be quick if you want to take out clustered targets. It also doesn’t let you use AP bullets even after unlocking the special ammo mag. It does allow you to pick EMP bullets to take out turrets. 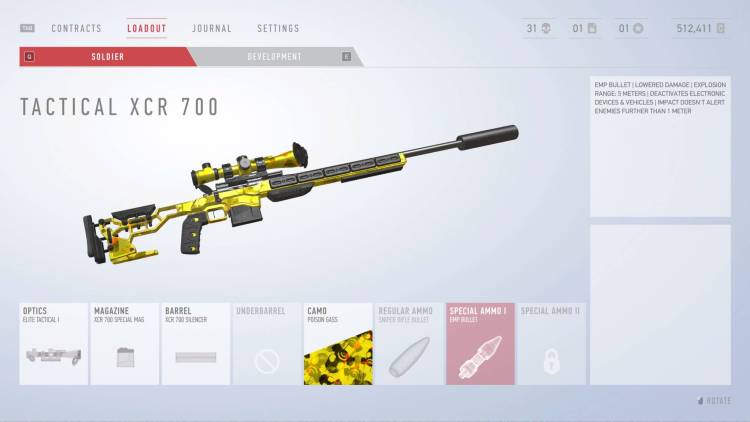 This became my go-to light sniper rifle towards the end of the game. It has the highest noise reduction stat out of all weapons and comes equipped with a silencer (no need to spend intel tokens). You can also modify the mag to have AP ammo which is great for taking out armored units. This may be the first heavy sniper rifle that you’d obtain in the game. It’s relatively cheap (requiring only a small number of contract tokens). You can also add a silencer. The most expensive sniper rifle in the game is also a heavy type. Once you’ve amassed a lot of cash and tokens, this should be your pick especially if you’re going for challenges. The Sturm – Precision comes packed with great scope options, and you can also unlock a silencer and special ammo mags. Yes, you can even pick explosive rounds or AP rounds (for a bit of overkill). The SV Amur is a DLC weapon that was just added recently. It’s a heavy sniper rifle similar to the Reese and Sturm – Precision, although it does have lower stability. The good news is that its magazine mods and barrel extensions don’t require tokens to be unlocked. You only need cash. Sadly, there might be a bug with this weapon since it makes almost no sound at all. Then again, I’m all for a silent killer. That does it for our weapons, gadgets, and loadout guide. Sniper: Ghost Warrior Contracts is available on Steam. For more information, check out our guides and features hub.

Compete in the Fortnite Fishing Frenzy this weekend