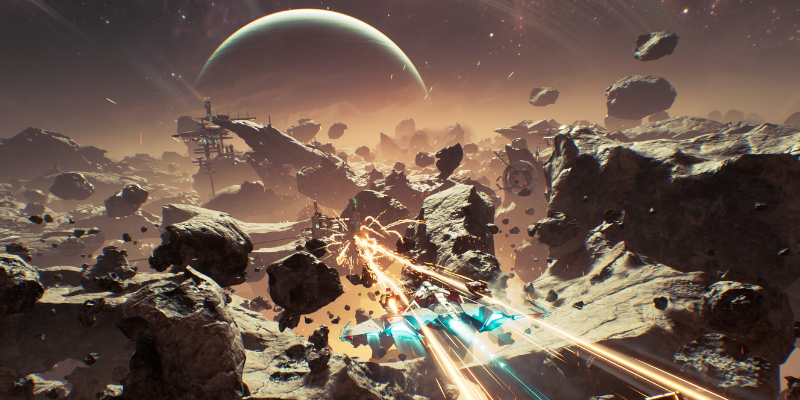 Games publisher Deep Silver has announced that the release date for Chorus is December 3. The upcoming space shooter is being developed by German studio Fishlabs., which Deep Silver’s parent company Koch Media acquired in 2013 shortly after it went into administration. The developer was founded in 2004 and is best known for the Galaxy on Fire spaceflight simulation games.

To accompany the announcement Deep Silver has also revealed a new trailer for Chorus. Dubbed the “101 Trailer,” it is the first major update fans have gotten on the game’s development since its reveal in May 2020. There may have been some concerns over the lack of updates but if this trailer is anything to go by, Chorus looks promising.

In Chorus you play Nara, an ace pilot who is hell-bent on revenge.  Formerly the right-hand woman of the galaxy’s Great Prophet, she feels immense guilt over her past. A cult that she used to serve rules the universe with an iron fist. They are cold and cruel, showing little empathy for anyone.

Knowing no better, Nara contributed to this cult’s evil deeds and is now more determined than ever to make things right. She’s not alone either, as her sentient spaceship Forsaken is there to assist. The wait for Chorus‘ December release date may feel long but it looks as though it could be worth it.

Chorus will have players take part in epic space battles in order to bring down this dark cult. You’ll be tasked with winning dogfights against other spaceships and even taking down colossal battleships. To do so, various upgrades will have to be obtained to improve Forsaken’s durability and damage output.

If Chorus sounds like something you’d be interested in, it can be pre-ordered now on Steam or on the Epic Games Store for $39.99 USD. Doing so will unlock the Elder Armor skin set for you to use at launch.