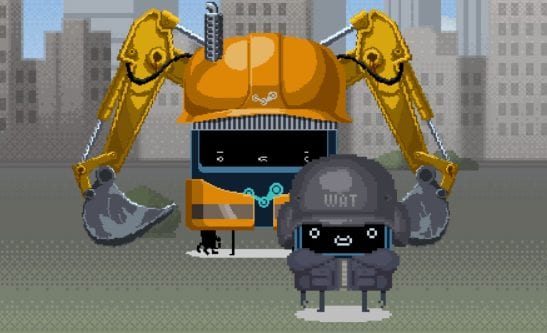 It’s time, once again, for the Steam Store page to experience “heavy load,” as Valve unveils the Steam ‘Monster’ Summer Sale 2015. From today until 21 June, there will be deals aplenty.

As always, the company has combined the mega-sale event with a little game/socio-economic experiment in which you fight adorable monsters to unlock further sales deals. Far as I can tell, the deals unlocked through the monster mini-game are replacing the usual ‘community vote’ type offers.

I’m not entirely sure how the game functions just yet because it is, predictably, experiencing a pretty heavy volume of traffic right about now.

Edit: I got in! It’s a Cookie Clicker/Clicker Heroes kind of thing.

Anyway, according to the info page linked above, playing the game can earn you Summer Sale cards, earn ‘upgrades’ for your monsters to make them more proficient in battle, unlock special discounts, and, ultimately, help you craft the Summer Sale Badge.

In traditional Valve/Steam fashion, everything you do feeds into everything else.

But enough about that, what kind of deals are available today? Quite a few, obviously.

In the Daily Deals selection, the Homeworld Remastered Collection is 60% off (making it $14 over here,) everything Metro has between 75-80% off (including the Redux versions,) the ever-lovely Valkyria Chronicles is a mere $5, and there are some specific Grand Theft Auto V deals, but they force you to buy some in-game currency along with the title … which is a bit of a ‘non-sale’ way to be in a sale.

12 hour Flash Deals return this year, and, as with the Dailies, there are too many to exhaustively list. But, if you fancy Outlast ($4,) something from the Darksiders series (80% off,) or a bunch of games localised by Carpe Fulgur (Recettear, et al for half price,) then all of those are in there.

Now, don’t mind me, I’ll just be over here trying to get back into the monster mini-game while pretending such things are totally beneath me.