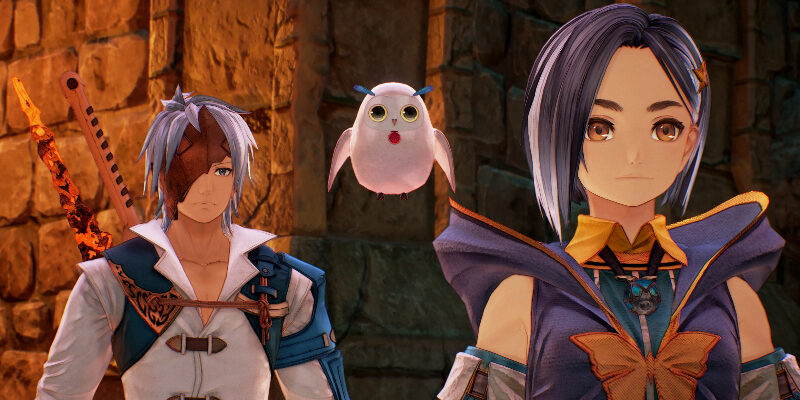 The Tales series consists of a wide range of JRPGs developed by Bandai Namco. They have been a staple of the genre since the ’90s and are still going strong today. Tales of Arise is the latest addition to the long-running franchise.

Bandai Namco has promised that Tales of Arise will push the series to new levels. The Japanese publisher has brought back various series veterans with the goal of producing the most impressive Tales game yet. And if my time playing it is anything to go by, Bandai Namco may have pulled it off.

Play how you want

Tales of Arise places a large focus on player choice. More specifically, there are a plethora of options to tweak the gameplay’s difficulties from one extreme to the other. The difficulty option itself varies from ‘Story’ to ‘Hard,’ whilst the use of artifacts can trivialize the combat further. 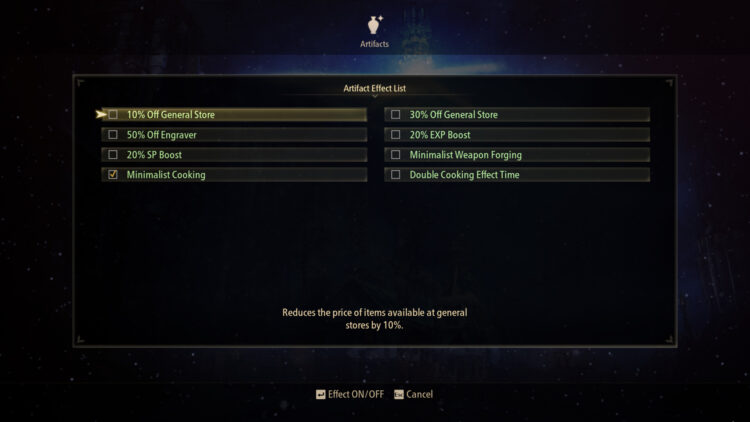 Artifacts are cheats that grant powerful passive abilities. These make playing through the story without having to worry about other gameplay aspects very easy. Examples include experience bonuses, permanent shop discounts, and various cooking buffs. The only downside is that the game locks some artifacts behind a paywall, but I think that’s excusable given how much great content is bundled in the regular game.

Of course, those looking for a more challenging experience aren’t left out. When playing on the highest difficulty, combat can get tricky. Although regular enemies are still easy enough to power through, some boss fights and giant enemies become extremely punishing.

Tales of Arise‘s combat isn’t overly complicated, and at lower difficulties it’s more or less a matter of just spamming buttons. However, as you raise the difficulty it becomes more important to take advantage of enemy weaknesses and set up your party suitably. Furthermore, staying on the move and using the dodge mechanic to avoid attacks is essential in claiming victory. 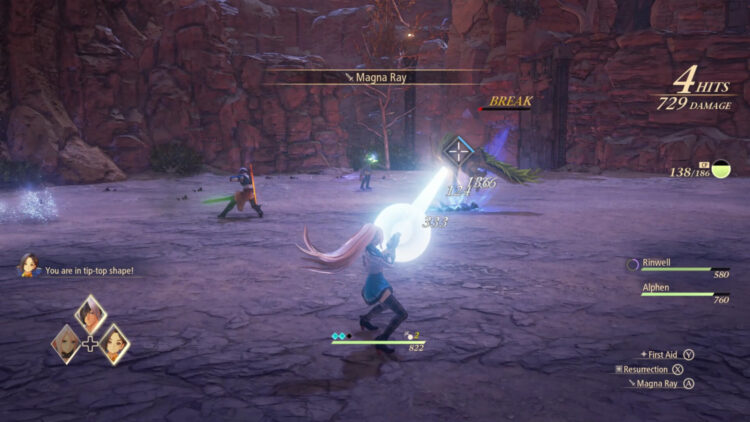 Without delving too deep into spoiler territory, there are six party members that are unlocked as you progress through the story. These all use different weapons that excel against various types of enemies. Truthfully, switching between party members to achieve optimal damage is often overkill and most players will probably just end up mastering one or two of their favorite party members.

As per Tales tradition, combat is more form over function. That’s not to say it feels clunky. If anything, it’s been improved from previous titles, but it’s clear that the striking visuals were prioritized above all else. This isn’t necessarily a bad thing, as Artes and boost attacks looks amazing, but it does feel as though the marketing hype around combat innovation was a little overstated. At least for me, it wasn’t the most prominent selling point of Tales of Arise.

That honor instead goes to the characters. As you’d want from any great JRPG, Tales of Arise features some wonderfully written characters and even better character interactions. Of course, the main story is full of this, but it’s the skits that really stood out to me.

Skits are optional comic book-esque interactions that add extra character development and flavor to each party member. Some of these are light-hearted and funny, whilst others are heavier and emotive. I really like the way these are implemented. Lore fanatics can opt into them, whilst those more interested in combat can ignore them. 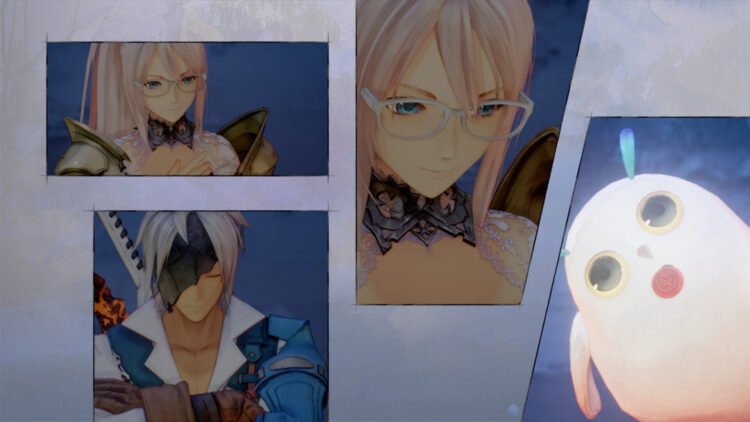 Developers often let their egos get in the way and force mechanics like these onto the player. After all, these studios spend a lot of time and money implementing them, so I guess it’s hard to accept that some people just don’t care. But Bandai Namco doesn’t have to worry about this because the skits are so good. Anyone who is even slightly interested in the party members and their stories is going to want to watch all of them.

Outside of the skits, each character has their own dedicated story arc. These arcs detail their backgrounds and motives for fighting. They play out alongside the main narrative but don’t get in the way of the game’s ability to tell the bigger story. This results in there being a nice mix of the big Hollywood-style plot twists and smaller, but still very relevant, character reveals. Spoiling the specifics would be a waste, so I’ll just say that if you’re looking for a great lore-centric JRPG, Tales of Arise is unquestionably an option.

Let’s be honest, JRPGs have a history of not playing well on PC. Just look at series like Neptunia, NieR, and even other Tales games. Yes, Tales fans surely remember the state of Tales of Zestiria, which launched on PC with a locked 30 fps cap. A locked 30 fps wasn’t even good on the PlayStation 4, but it’s downright insulting on PC.

Thankfully, things have come a long way in recent years, and Tales of Arise is a perfect example of this. This game comes with almost every option a PC gamer could want. Native support for higher resolutions and refresh rates, plus options to enable common graphical settings like ambient occlusion and anisotropic filtering. More importantly, you can disable cursed graphics settings like vomit-inducing motion blur. 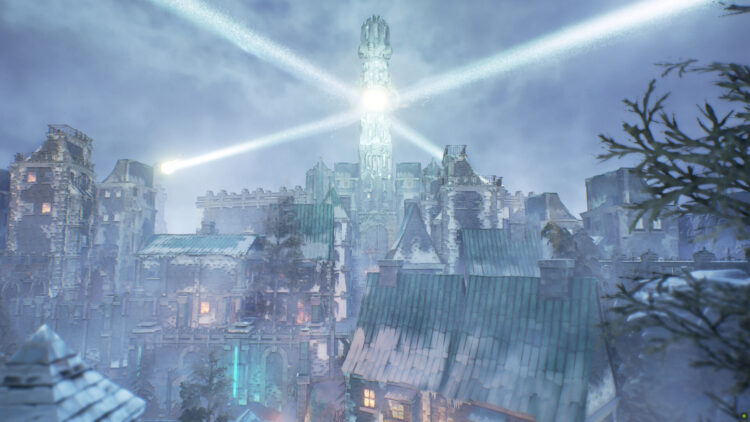 One disappointing omission is the lack of DLSS support. PC gamers with high-end Nvidia cards will know that DLSS can be a godsend when trying to take advantage of higher refresh rate monitors. Unfortunately, Tales of Arise only supports basic antialiasing via TAA and SMAA. Regardless, this is a strong port that most players will be perfectly content with.

The best part of Tales of Arise being a good PC game is that you can enjoy its gorgeous visuals with no unnecessary distractions. Trust me when I say this is one of the prettiest JRPGs ever released. Although everything looks nice, the character models are especially good looking. The sheer attention to detail is difficult to quantify in words alone. But it’s clear that the franchise’s transition to the Unreal 4 engine has paid off big time.

Bandai Namco should be proud

Tales of Arise is an exceptional JRPG that deserves to be considered for game of the year. Its characters, dialogue, visuals, accessibility, and overall port quality add up to ensure that it’s a game well worth playing. Players fond of conventional JRPG mechanics and tropes will find themselves at home playing through it.

If I had to name a con, it would probably be that the combat isn’t nearly as innovative as I’d expected. Improvements have been made over previous titles but these are more technical and visual innovations than they are mechanical. Combat has never been the main selling point of the Tales series, and I don’t see Arise changing that.

Tales of Arise is a genuinely exceptional JRPG that does little wrong. The reworked combat mechanics aren't perfect, but in the grand scheme of things that doesn't matter. Its storytelling, character development, visuals, accessibility, and PC version quality have all been produced to world-class standards. Bandai Namco should be proud, and fans should be thrilled.