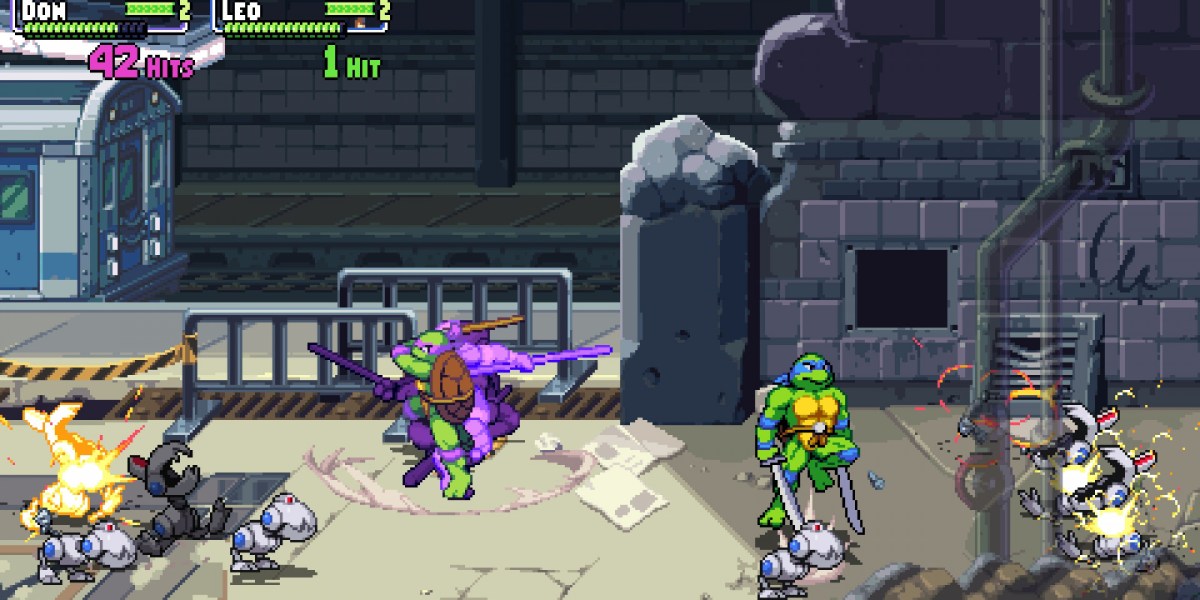 Growing up, Turtles in Time was easily one of my favorite games. I played it again and again on the SNES. I played it in the arcade when I could. And I even repeatedly played the sort-of inferior Sega Genesis semi-port, The Hyperstone Heist. Over the years, it has remained an important part of my gaming memories. Teenage Mutant Ninja Turtles: Shredder’s Revenge succeeds because it’s perfectly aware of that legacy. The game is undoubtedly light on content considering its price tag. But getting what amounts to a full-fledged Turtles in Time sequel — that actually improves upon its predecessor — makes the game a welcome treat.

Storywise, Shredder’s Revenge doesn’t try and go far beyond Konami’s TMNT beat ’em ups. Shredder and his lackeys are threatening to give the Statue of Liberty an evil makeover. The Turtles, along with Splinter and April O’Neil, set out to stop him. Naturally, this sees them repeatedly run into major names from the 1987 show’s rogues gallery. And that included a few faces I didn’t even recognize. Who the hell is Groundchuck?! The game also features voice acting from much of the show’s original cast, which only helps it feel more authentic.

Visually, Shredder’s Revenge is pixel heaven. Character sprites are large, detailed, and paired with a ton of great animations. Michelangelo and April have the most amusing of these, as the former joyfully boogies his way across the screen and the latter spontaneously manifests TV news-related equipment from thin air. How you fight robots with a microphone is beyond me, but she finds a way. Level artwork is similarly excellent, with plenty of varied, themed locales. Granted, these themes are basic and don’t always have the most unique personalities (a mall, a zoo, a museum, a department store), but they’re all lovingly designed and packed with details, plus references to older games. 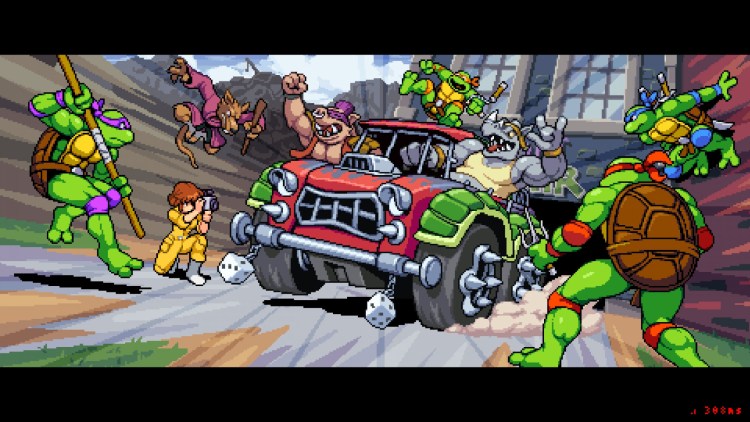 And a step to the right

This is a beat ’em up, so you and up to five others will spend your time walking to the right and beating the crap out of everything that approaches you. Shredder’s Revenge has 16 stages, 13 of which are your standard beat ’em up fare, plus two auto-scroller stages, and a final boss stage comprised of two fights. Each character has their own stats, divided among range, speed, and power. Raphael, Splinter, and Casey Jones have a high power stat, so many of their moves are more impactful than their counterparts.

Mikey, Raph, and April are my favorite characters, as they’ve not only got some of the most useful moves, but the best animations out of the bunch. Gameplay is typical, but is a great example of beat ’em ups done right. All characters have the same inputs for specific attack types, but those moves are different in notable ways. For instance, everyone has a rising attack. For five of the characters, it’s just a single hit, but Mikey and April deal out multiple hits with those aforementioned super fun animations.

Similarly, power-based characters have downward slam attacks when the default hit is used in the air. I prefer Raph for this, as he’s much faster than Splinter and Casey. Mikey, on the other hand, just lightly steps on enemies with his, which lets him stay in the air as long as you’ve got foes to kick off of. Unlike Turtles in Time and the other Konami games, Shredder’s Revenge has a lot more impact. Instead of hits doing generic damage until HP runs out, enemies go flying and bounce around the screen. Depending on which character you pick, you can juggle them to a certain extent. 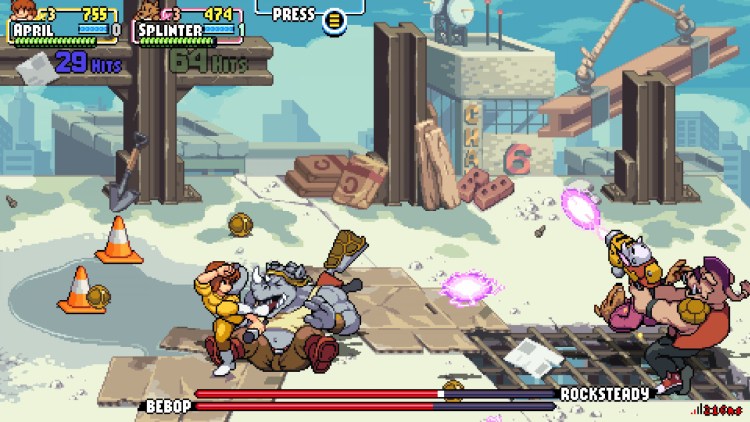 Shredder’s Revenge has two modes: story and arcade. Both can be played online, although the latter will undoubtedly be more popular. Story mode puts you in the Turtle Van, aka the Party Wagon, on a top-down map that lets you pick between levels. It’s reminiscent of the map from that awful Konami NES game (the one with the notoriously terrible underwater section). The only other things on the map are characters you can find collectibles for in the levels, such as VHS tapes, newspapers, and bugs. If you return to the characters after finding the collectibles, you’ll get a boost to your Hero Points.

Hero Points let you level up each of the seven characters. Each time your points go beyond specific thresholds, something new unlocks. Sort of. You’ll get a couple of minor HP increases, new super moves, and extra lives. By default in story mode, you start every level with three lives, which reset every time you start a new level. The super meter fills up as you fight enemies. When it’s full, you can use your ground or air super moves. You also unlock extra meters, so you can pull off three in a row if you want. 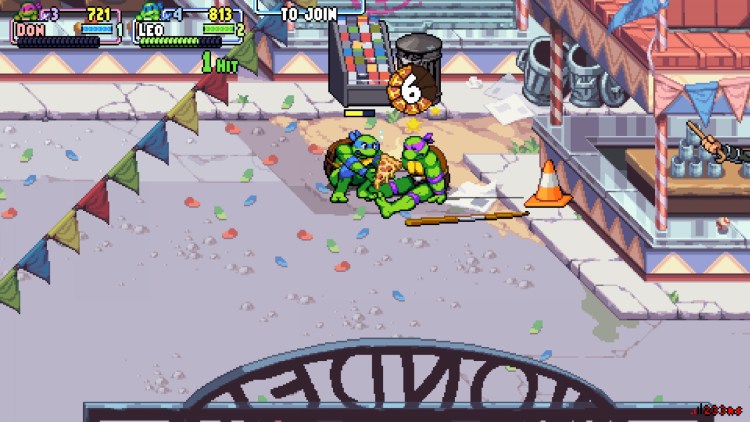 The final super uses up all three bars and increases your damage output. There’s a decent amount of depth to what characters can do, although it’s not as nuanced as Streets of Rage 4 or Fight ‘N Rage. Characters can all dash and have high and low dash attacks. In a particularly good move, characters can also dodge, which greatly aids mobility. I wish every beat ’em up had this. Finally, the grab mechanics from Turtles in Time are back, including the ability to hurl enemies at the screen. Shredder’s Revenge does a fantastic job of revitalizing and enhancing the classic gameplay I loved as a child.

Unsurprisingly, things don’t last longr. Shredder’s Revenge takes about 100 minutes to get through and there’s nothing to do beyond the 16 levels. While this is perfectly standard for a beat ’em up, I wish there was something else. A one-on-one fighting mode would have been cool, or some sort of survival mode or score attack of some sort. Still, Turtle fans are going to have a great time here, as this is pretty much exactly what we wanted when we first set eyes on this game. It’s great to see a new Turtles beat ’em up made with this much love and care. Let’s hope this isn’t the last one.

Light on content but heavy on satisfying gameplay and great artwork, Shredder's Revenge is exactly what fans of Turtles in Time would want out of a beat 'em up.