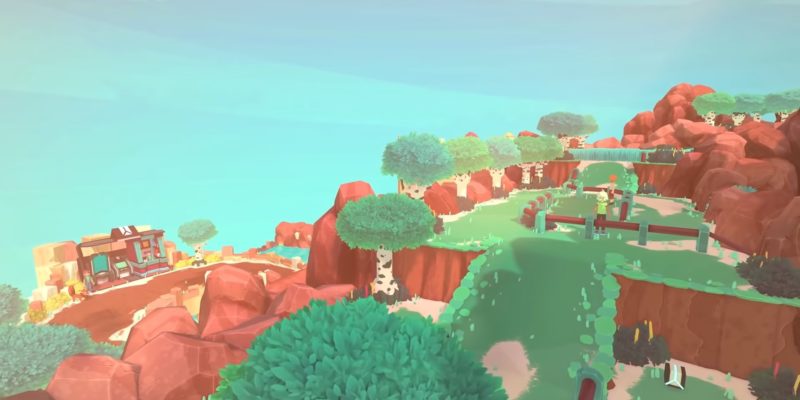 Let’s cut to the chase: Temtem is coming at a good time. Justified or not, discontent amongst the Pokémon fandom is at an unmistakable high. The formerly unshakable golden formula could be on the verge of losing its brilliant shine. As such, with the promise of a new twist on the beloved creature-collection genre, Temtem may very well be exactly what gamers are asking for. New combat systems, in-depth breeding, multiplayer, shared world, housing, guilds — this game’s got it all.

The recent three-day stress test gave me my first taste of Crema’s new MMO. And, well, color me intrigued. Temtem is, in many ways, a distillation of the Pokémon formula. It highlights what makes Pokémon so charming and addicting – and, as a result, can’t help but walk straight into a few very similar pitfalls. But make no mistake, Temtem can stand on its own merits; it has more than enough unique qualities to separate itself from its contemporaries. I walked away from the experience feeling refreshed and rather impressed by how much content was currently available despite the game being far from completion.

The Airborne Archipelago is as vast as it is vibrant, with beautiful blue bodies of water to cross, verdant fields to explore, and detailed interiors to socialize in. As you progress through the game’s story, you’ll unlock new abilities that expand your exploratory options. Each of the game’s islands has its own distinct look, and, of course, its own unique Temtem to catch. Character customization, while not flooded with choices, offers up an interesting palette of looks and colors as well. All clothing pieces, hair options, and beyond are entirely unisex. As such, players can mix, match, and make the most of the choices they’re presented. 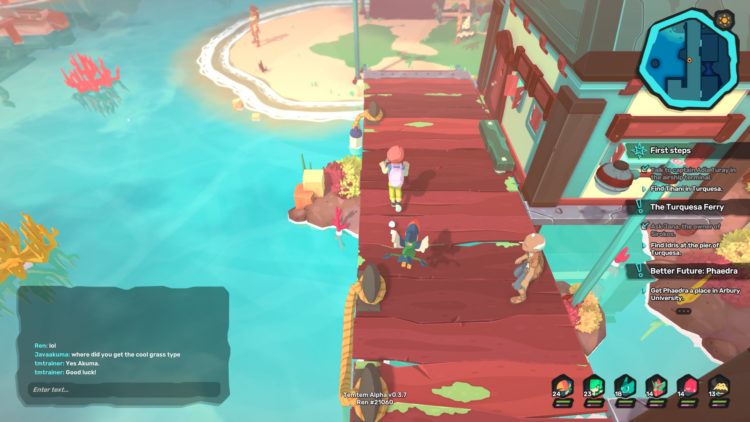 Temtem’s shortcomings certainly aren’t present in its visuals, nor in its cheery soundtrack and pleasant, bubbly soundscape. Instead, they arose during the monotonous trek through the first island. Once I’d finished gawking at the detailed animation work and lush environments, my initial impressions were replaced by an unshakable claustrophobic feeling. Though the world of Temtem had tempted me with the promise of deep exploration and constant wonderment, in actuality, I found myself suffocated — or so I thought.

Hyper-linear paths, endless unavoidable tamer battles, and constant wild encounters with the same few Temtem hampered my enthusiasm. All this to reach the next town or Temporium (Temtem’s Pokémon Center equivalent). There, the game would yank a rather unappetizing narrative carrot away from me yet again, forcing me to work my way through another mundane gauntlet of tamers and uninteresting paths.

I thought my poor experience would extend beyond those first six hours. But I’m happy to say that I thought wrong.

I trudged on desperately, waiting for the moment when the game would finally open up. And, after carving through a number of areas and bosses, I finally found what I was looking for. Upon acquiring the surfboard item, my chains were cast off and I was free to explore all the nooks and crannies of the first island. I surfed my way to new areas, secret caves, and quaint, little islands undoubtedly hiding some secret items or Temtem. Now, I had options. As the captain of my own proverbial ship, I could explore whatever I wanted, at my own pace. 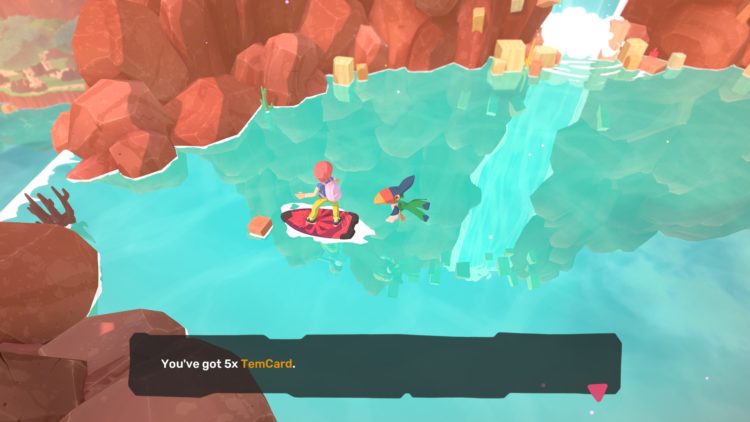 Though advertised as a massively multiplayer creature-collection game, I had originally found it concerning how little this “massively multiplayer” element impacted my gameplay experience. It seemed like no one was interested in talking, battling, co-op, or trading. My fellow tamers focused solely on throwing themselves at the myriad, mandatory encounters between them and the next Temporium. However, by the second island, we had all found our groove. More people were willing to stop treating Temtem like a single-player experience once they had some breathing room.

The presence of choice completely transformed Temtem for me, but the issue still remains that the main story is really nothing more than a slog down narrow, uninspired paths. However, it’s important to note that the game is still in alpha, and many stops along the way are currently still in development. When that content makes its way to the game, we’ll have a wider breadth of activities and sidequests to indulge in. 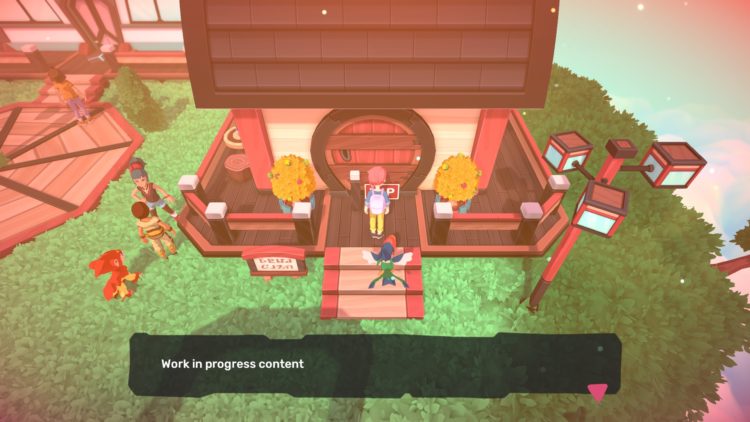 In the meantime, there’s still a host of Temtem to capture, a breeding system to play around with, and endless content in the form of casual and competitive PvP. The test featured 75 Temtem, though I definitely can’t say that I saw them all. Each one has its own stats, skills, elemental properties, and evolutions. Anyone familiar with Pokémon or other creature-collection titles will feel right at home.

Tamers carry a squad of six Temtem, throwing out two at a time in two-on-two battles. If playing cooperatively, each player controls one Temtem, working together to KO the opponent’s squad. Each Temtem can have a maximum of four active techniques, alongside a healthy selection of recovery items. Like its contemporaries, Temtem features turn-based combat, with attack order determined by speed stats. 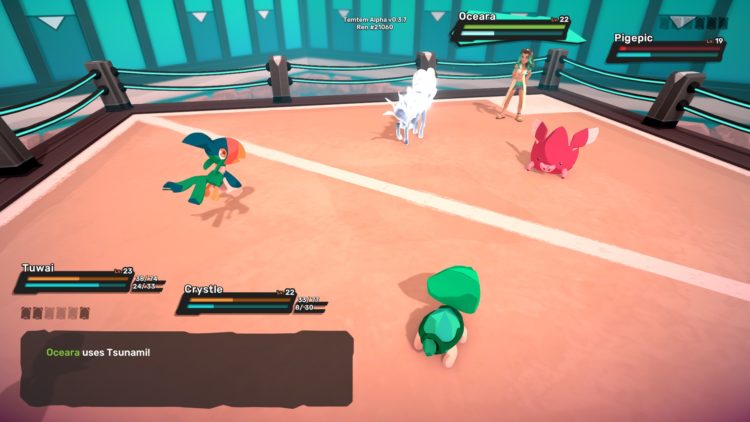 Combat’s most transformative feature comes in the form of a stamina bar, which replaces the traditional technique count. Techniques have stamina costs proportional to their power, so more powerful techniques eat enormous chunks of a Temtem’s stamina. Using a technique with a cost exceeding a Temtem’s current stamina inflicts self-damage while also putting said Temtem out of commission for a turn. During battles, stamina can be recovered by letting your Temtem rest, swapping them out, or consuming various recovery items. Stamina introduces an additional, but necessary, layer of strategy to mix; weighing risks and rewards has never been so tricky or fulfilling as it is in Temtem.

How to train your Temtem

Frolicking in the tall grass and in select areas leaves you open to wild encounters. Untamed Temtem attackers can be captured in familiar fashion by knocking down their health and tossing a capture device. Then, observe in white-knuckled anticipation as these wild Temtem are digitized into trading cards. It’s odd, yes, but still quite the sight to behold — the overwhelming relief is no joke either.

Each tamed Temtem can equip a single piece of equipment, providing a bonus to an existing, randomized trait. As you battle and level up your Temtem, they can learn new moves, which are conveniently stored and can be swapped in and out of active use at any time. Temtem also introduces Training Values (TVs) and Single Values (SVs), which prove vital for players hoping to milk every last drop of potential out of their squad. Both provide bonuses to existing stats, including health, defense, speed, and evasion. 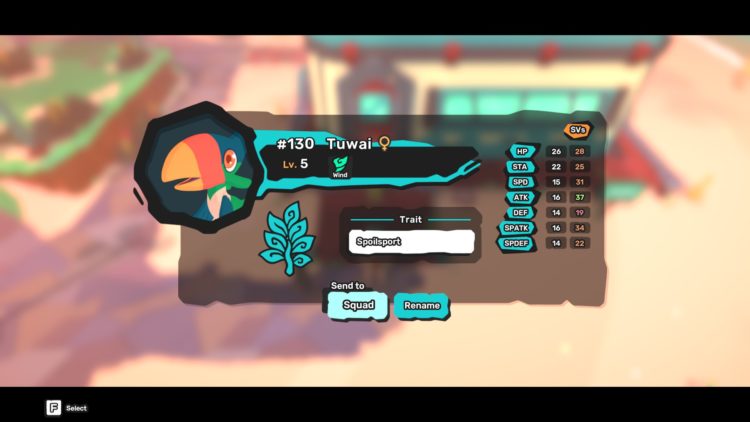 You’ll gain TVs through feeding your Temtem stat-specific items or by defeating wild Temtem. SVs are randomly-generated stat bonuses dealt out upon capture, or, in the case of breeding, taken from the Temtem’ parents. Rare Luma Temtem — the Temtem “shiny” equivalent — will always have a number of maxed-out SVs. That last bit of information comes courtesy of the budding Temtem wiki, as I was not fortunate enough to lay eyes on even a single Luma Temtem.

All signs point to breeding as the de facto method of building your dream team. At the Breeding Center, players can drop off a pair of same-type Temtem in exchange for a hatch-able egg. Inside is your new competitive PvP titan with techniques, stats, and SVs worthy of a champion. And if not, well, go at it again.

Despite the wealth of content currently available, let alone at launch, I found myself hungry for some laidback fun with friends. Tense battles and breeding serve as the backbone of Temtem’s end-game, but no MMO is complete without some casual time-sinks. To that end, a housing system, the guild-esque Club system, and a host of mini-games will find their way into the game at one point or another. Other notable future additions include Mythical Temtem and a special Nuzlocke challenge option. 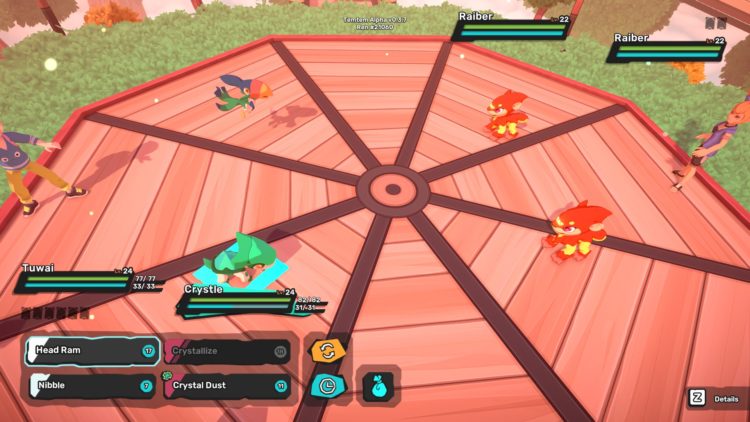 Three days with Temtem simply wasn’t enough; there’s so much left to see and so many more Temtem to tame. Despite my initial reservations and an awkward start, I grew to love Temtem for what it brings to the virtual table. The uneventful main story is a bit of shame, given that the opportunity Temtem had to tell a fresh tale in a brand-new world, but I quickly put that to the side. Exploring on my own, I was overcome with a sense of wonder that seems to have left most modern MMOs. Though I remain moderately skeptical about the potentially repetitious and grindy nature of this new-age creature-collection experience, I’m greatly anticipating my next trip to the Airborne Archipelago.

Catch some Temtem for yourself when the game enters Early Access on Steam on January 21.