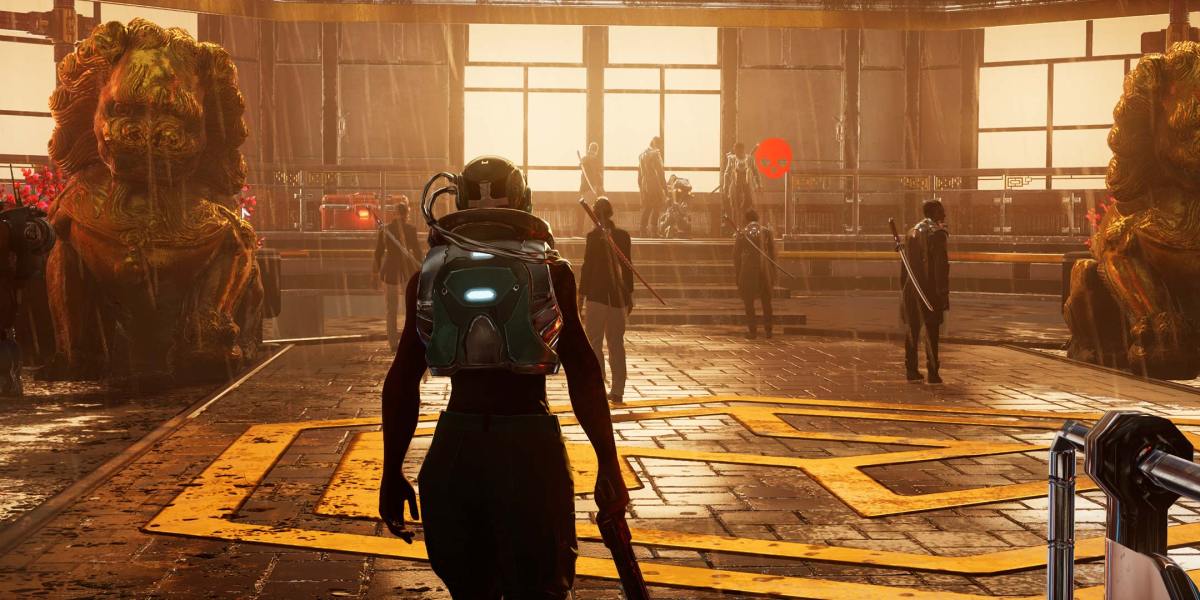 There has been a lot of focus on the cyberpunk genre over the past couple years for obvious reasons, and The Ascent is the latest game to join the fray. Unlike other neon-soaked dystopian experiences, this title is a top-down isometric shooter in an open world. A lot of polish clearly went into the gameplay and graphics, but this is a game that boasts quality in pretty much every facet. The overall reception for The Ascent remains to be seen, but I think it’s absolutely worth your time and money right out of the gate.

A longstanding perception of futurists has been that corporations will eventually rule above traditional governments. That is precisely the case in The Ascent. The game takes place on a world where humans coexist with various alien species, as life is nothing short of difficult for those on the bottom of the social totem. The brutal struggle for survival certainly makes things like physical differences easy to overlook. Corporations like the Ascent Group manage to keep society somewhat orderly, but there’s no shortage of corruption on the world of Velles either.

The premise of this narrative is that the Ascent Group just up and vanishes one day, leaving a massive power vacuum to fill. More accurately, it goes bankrupt, and things are about to fall apart the moment people realize the money has stopped flowing. This is where you come in.

It’s a long way to the top, and you’ll often wind up back at the bottom

The plot entails your investigation into what happened to the Ascent Group. You start out as a lowly enforcer, but slowly climb your way to recognition. Eventually, you’re smack dab in the middle of a whole conspiracy. It’s nothing short of what you’d expect out of a game in this genre, so don’t expect the narrative to break any new ground or do anything revolutionary or controversial. Instead, the storyline for The Ascent feels more like an adventure full of the gritty stories that cyberpunk fans are sure to love along with some classic genre tropes. In this sense, it plays it safe, but still comes across as a pleasing experience.

While the main plot and side stories do at times just feel like avenues for your adventures, everything is still interesting enough to warrant your time and attention. You can do everything from smuggling steroids for alien powerlifting jockeys to helping shy aliens experience the more dangerous, yet interesting parts of the city in VR. You’ll see everything from the industrial depths littered with cast-out trash to the immaculate pinnacles of the city along the way. The Ascent is a game that’s very much about the journey, because the world is rich with life, detail, and character. 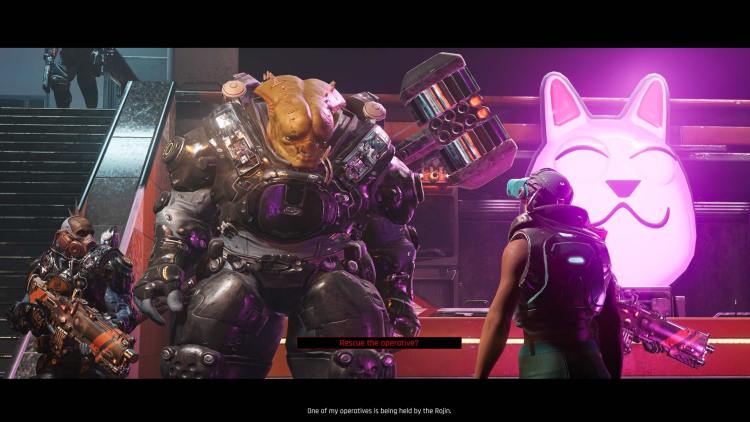 A lot of the immersion comes from the impressive graphics that make this top-down experience feel anything but flat. The high-resolution textures and detailed effects coupled with the varied environments lend to the feeling like this game provides a next-gen experience. The high-density crowds, background characters on lower levels, and bustling skies are what really bring it all in, though. In addition to this, the ambient background noise is high quality and the plethora of NPCs have many snarky comments ready to throw at you. Things like environmental physics and gently floating hovercraft help, too.

Perhaps one of The Ascent‘s greatest strengths is its ability to make you feel both like an elite mercenary and an amateur in over their head. The gameplay leans into the bullet hell genre at times with the amount of stuff you need to shoot at, but the varied enemy types and massive arsenal of guns and abilities at your disposal give you plenty of opportunities to switch things up. In fact, you’ll need to do a lot of weapon hot-swapping alongside tactical considerations as you go. While you can steamroll your way through a fair number of enemy encounters with skill alone, different situations will call for different loadouts. 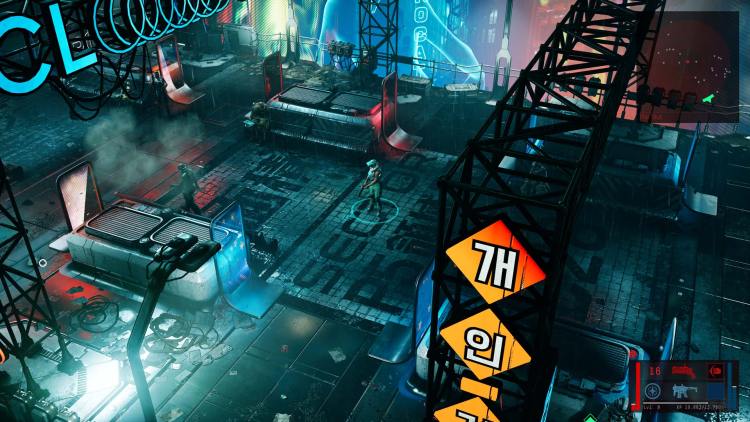 You can equip two guns, two Augmentations, two Modules, and one tactical ability at once. Additionally, you can configure your armor based upon the traits you wish to buff for different situations. All of this can be done on the fly thankfully, and you can carry as many different items as you want so as not to slow down gameplay, as well as encourage you to try new combinations constantly. SMGs are a great choice for many encounters and often pair well with shotguns, sniper rifles, or heavy weapons of a specific damage type. The weapons cannot be customized, but the large number of weapons on offer counters that pitfall. You can upgrade your weapons to do more damage with materials and buy new weapons with Ucreds.

Skills are another important key to success in The Ascent and offer ways to tailor your playstyle. You can bulk up on health, critical hit chances, and weapon accuracy if you prefer to tank it or become a warp warrior that’s able to evade a fair number of attacks. My character favored the latter. You’ll need to level up to earn more skill points, but also to keep pace with the higher-level enemies throughout the campaign. 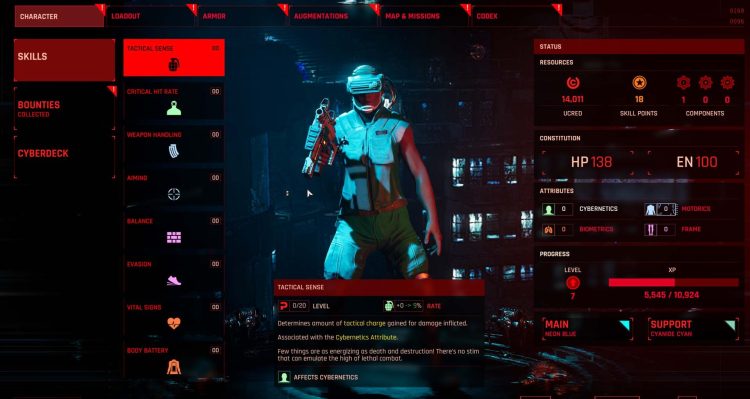 Augmentations are your abilities, and these are a blast to use. You can deploy healing fields, drone swarms, armored mechs, and even a giant laser beam just to name a few. These abilities, along with your Tactical ability option, refill based upon the amount of damage you dish out. Give-and-take systems like these tend to work great for keeping up the pacing of action and The Ascent definitely benefits from this gameplay design. You also have passive abilities called Modules that allow you to further improve your lethality or survivability.

Despite all of the gameplay options at your disposal, you will find that a few situations call for specific measures if you wish to progress. The Ascent doesn’t offer difficulty options, so you’ll have to experiment if you keep dying in certain encounters. This is where the problems start to arise. A select few enemies come off as overpowered, unbalanced, and, sometimes, downright spongey. You can mitigate some of these scenarios with the proper guns, damage types, and abilities to help you vanquish your foes or stay alive, but the game can feel a bit cheap in some instances.

Enemy level advantages are partially to blame for this, which suggests that side quests and weapon upgrades are necessary rather than optional. If you attempt to push straight through the main campaign, you’ll quickly realize that it’s nearly impossible to level up enough by focusing on that alone. Fortunately, checkpoints allow you to dip back out to the open world if you need to prepare more for a tough fight.

How do we keep getting into these messes

You could try and bring in a buddy to even the odds. The game features full co-op integration, but your buddy better be as strong as you, or they will just die and force you to respawn. That’s right, there’s no auto-leveling for co-op and no respawns. You can pick your ally back up if they get downed, but you may find them to be more of a liability than an asset. Hey, life’s tough in the big city.

For a game that so openly advertises its co-op offerings, the mode implementation comes up short in what is otherwise a carefully considered experience. It’s really easy to get a co-op game going, but there are obvious problems when your buddy needs to be exactly on your level in order for the experience to be decent. If a friend decides to pick this game up after you’ve progressed halfway through, you’ll be in a tough spot to either wait or restart to share the experience. Considering how tough a few of the fights are, you might need their help too. 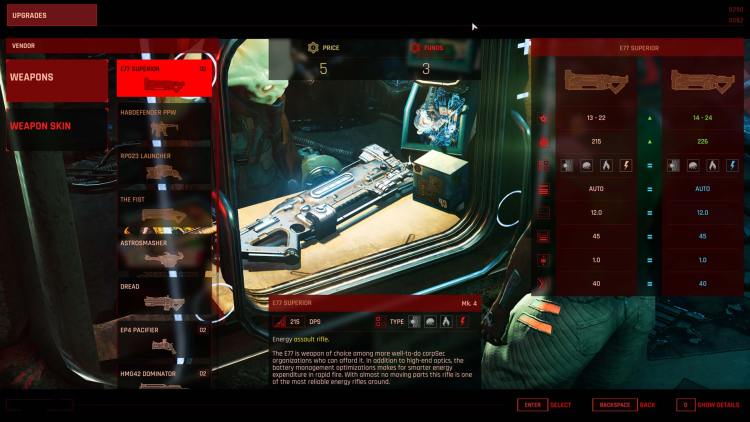 Can you run this cyberpunk game?

The Ascent looks phenomenal, but the visual experience does come at a cost to the GPU. We used an RTX 3060 and a 7700K with 16 GB of 2400 RAM to test this game. These hardware specs still delivered a smooth 4K 60 fps experience with the DirectX 11 API, but you will need something better for DirectX 12. The only reason you may wish to do that is if you plan to use ray tracing.

As it just so happens, The Ascent features Nvidia RTX ray tracing, which means it also features DLSS. This puts anyone using an RTX card at an immediate advantage in this title, as there’s no word of FSR support or an option for any other resolution upscaler. You can manually adjust the resolution scale though, and this game is fairly easy to run on low settings. Without DLSS Quality on, the RTX 3060 was still able to run the game in near 4K, but multiple effects had to be turned down from medium settings. Don’t let any of this hold you back from giving the game a whirl if you have something weaker, though, as the game still looks great on low settings with lower resolutions.

There really weren’t too many bugs to complain of aside from the literal robot spiders. Well, technically those are arachnids. Robo-arachnids? Aside from a single client crash, the bugs were few and far between and sometimes just cosmetic. I noted a few instances of performance stutters, NPC pop in during loading sequences, and that footstep audio lingers briefly after stopping, but nothing game breaking. Admittedly, there were invisible barriers on a few streets, but those only appeared twice and could all be circumvented. Overall, the launch build for The Ascent is excellent. 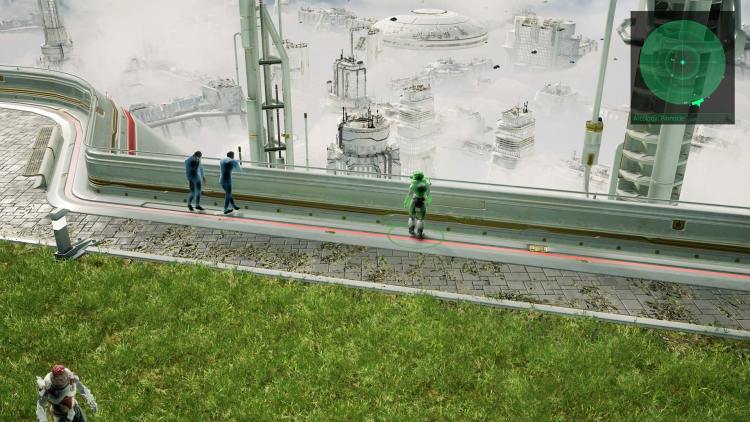 Reaching the Pinnacle tier is what most citizens dream of. The sun, the grass, it’s glorious!

Is The Ascent top tier?

The Ascent seemingly came out of nowhere, but this game has a group of senior developers behind it and it shows. The controls feel tight, the camera action is on point, enemy variety keeps things fresh, and the visuals, sounds, and effects are killer. You may struggle with a few combat hurdles along the way, but exploring the side quests and large world will reward you with more character enhancements. The game does feel a bit lacking in terms of armor customizations, and the enemies do feel a bit troublesome in a few encounters, but it’s a good time. For something that only costs $30 USD, anyone who thinks The Ascent sounds appealing should definitely give it a go. Better yet, you can play it without buying it specifically if you have Game Pass.

The Ascent is for the most part a polished experience that's tons of fun to play and behold. The narrative will carry you along to many interesting places with different baddies to fry, though a few encounters feature enemies that are pure bullet sponges. You will need to pick the right equipment and keep up with leveling, but these issues can be overcome. Hardware requirements shouldn't hold you back too much, and glitches are few and far between. The overall quality makes this one a must play for cyberpunk and isometric shooter fans.