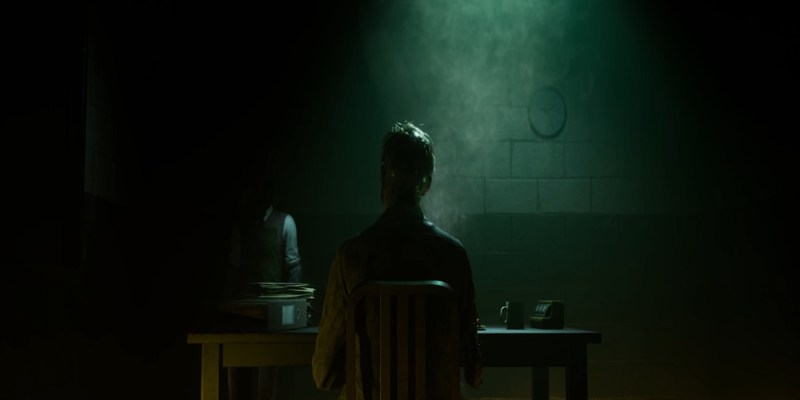 The Devil in Me is the fourth title in The Dark Pictures Anthology. It’s also noted as the season 1 finale, which implies that we’re going to see a lot more horror thrillers from Supermassive Games. But that can wait. With numerous important choices and the looming specter of death as a consequence, The Devil in Me keeps you right at the edge of your seat for a time.

Having played Man of Medan, Little Hope, House of Ashes, The Quarry, and Until Dawn, I can genuinely say that this is one of Supermassive’s best offerings to date, especially when we think of new mechanics and quality-of-life (QOL) improvements. Still, there are a few notable flaws to take note of.

A fascination with serial killers

Henry Howard Holmes is widely considered as America’s first serial killer (and the original “Triple H” before a wrestler adopted that moniker). The nefarious fellow once lured victims to the World’s Fair Hotel in Chicago, which would eventually be dubbed later as the Murder Castle.

Fast-forward to the present, and a crew of a documentary series is covering his crimes. They then receive an invitation that takes them to a recreation of Holmes’ Murder Castle. It starts out innocently enough, merely an opportunity to film in a thematic location in an attempt to draw ratings. However, things take a turn for the worse when they’re separated and picked off one by one. This sets the stage for The Devil in Me‘s narrative, and yet another harrowing night of survival from Supermassive. 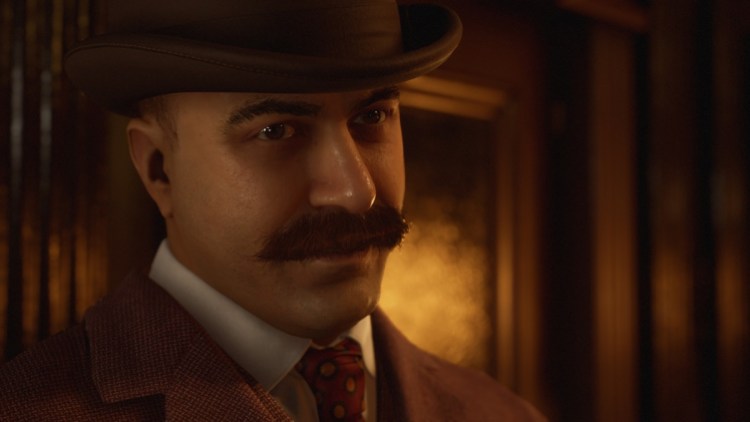 The first thing you’ll notice in The Dark Pictures Anthology: The Devil in Me is how direct it is when telling you about the enemy you’re facing. If the previous games toed the line between supernatural or psychological horror, then this one lets you know that a killer is on the loose. Even the prologue, where Holmes brutally slaughters a newlywed couple, is enough to imply that this will be a gruesome game.

And things just get better from there. Docuseries host Kate (played by Jessie Buckley) and her fellow crew members start experiencing a lot of weird stuff going on in the hotel. No other guests seem to be around, and all they could find are creepy animatronics and mannequins. 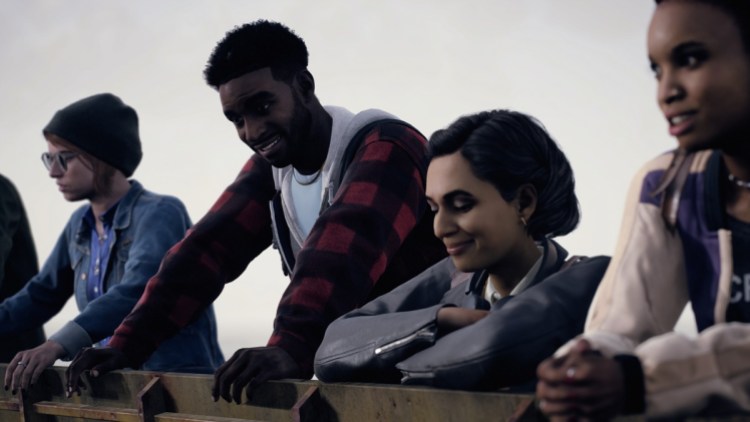 The tension is further amplified through the creative use of light, shadows, music, and sound effects. The darkness that surrounds you, the creaking noises as you walk around, and the surprising jumpscares all create a foreboding atmosphere. Likewise, the hotel seems to “shift,” with walls closing off entire corridors, completely sealing off an area. One innovative technique is when you do manage to return to a room or hallway using a different character, and you’ll realize how things have slightly changed.

Similarly, traps can spring up, sometimes unexpectedly, and you’d have to make the right choices. It’s clear that The Devil in Me took a lot of inspiration not just from the legend of H. H. Holmes, but also from the Saw franchise, escape rooms, and, a personal take, the film Cube from 1997. 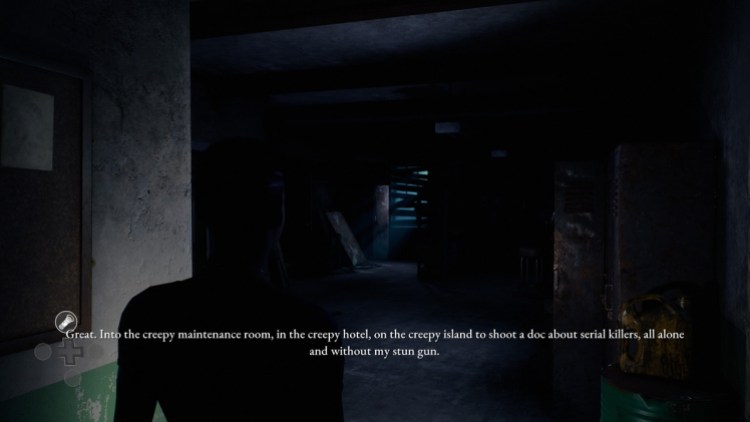 But you can never leave

Veterans of The Dark Pictures Anthology will be familiar with the core gameplay mechanics. While you’d normally move around with your characters, various scenes will play, allowing you to choose dialogue responses. There are lots of quick-time events (QTEs) as expected, such as pressing/mashing buttons, aim-and-shoot, and the “Don’t Breathe” mini-game. One new addition is the “hide” mechanic, where you have to run to a location and hold a button to stay out of sight. Succeed in these, and your characters might live to see another day. Fail the important ones, and they’d meet an untimely demise.

Of course, as with other games in the series, The Devil in Me is brimming with collectibles. The premonitions, pictures that depict a fateful encounter or someone’s death, are still around, as are news clippings and odd objects considered secrets. Several of these have their own cinematic flashbacks or reports, akin to what you’ve seen from House of Ashes‘ archaeologist digs. Also, you’ll obtain dioramas, which are basically static renditions of moments in the campaign. These are unlocked using obols, black coins that are fairly well hidden. 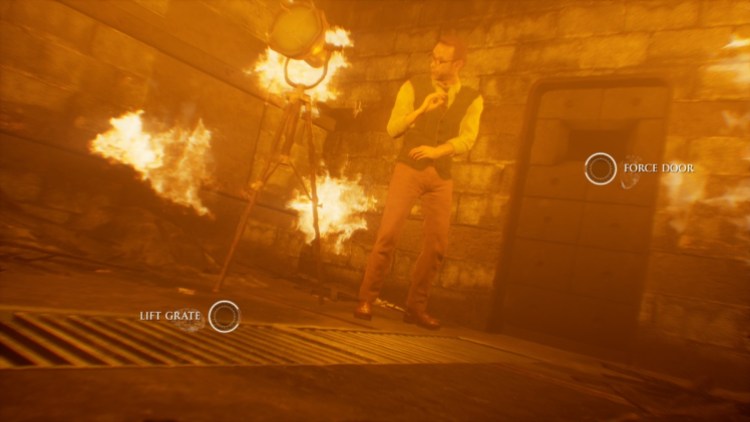 But, that’s not all, as The Devil in Me introduces QOL improvements and concepts. There are new movement options. Characters can finally sprint, ending the long-running gag (pun intended) about everyone’s sluggish movement. They can also mantle over ledges, climb ladders, crouch down low hangings, and crawl through openings. While you can’t expect the protagonists to parkour around like Eivor in Assassin’s Creed, these changes are very much welcome.

Another notable feature is the use of character-specific tools. The director, Charlie, has business cards that can open drawers. Sound technician Erin, meanwhile, has a mic that can pick up noises through walls, and an inhaler that prevents her from having asthma attacks. There’s Jamie, with her multimeter to fix breakers, and Mark, who can take pictures with his camera and pull down objects with a tripod. 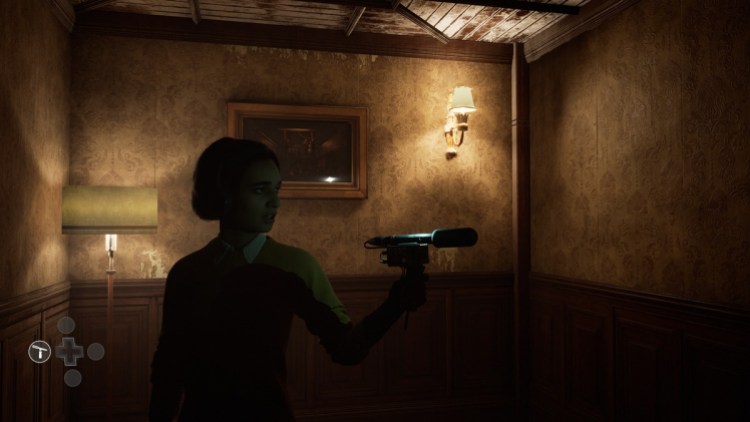 They even have different light sources: Kate has a makeup kit; Erin and Jamie have flashlights; and Charlie has a lighter. Mark probably has the worst option, as his camera has a faint red light, making it hard to see, though he can use its flash to create more terrifying surprises.

While these tools and gadgets tend to be used sparingly (and as gimmicks in some cases), they’re still a viable feature to have. In essence, The Devil in Me feels more like a survival horror game, as opposed to the “Choose Your Own Adventure combined with walking around and making choices” type of presentation that we’ve come to know. 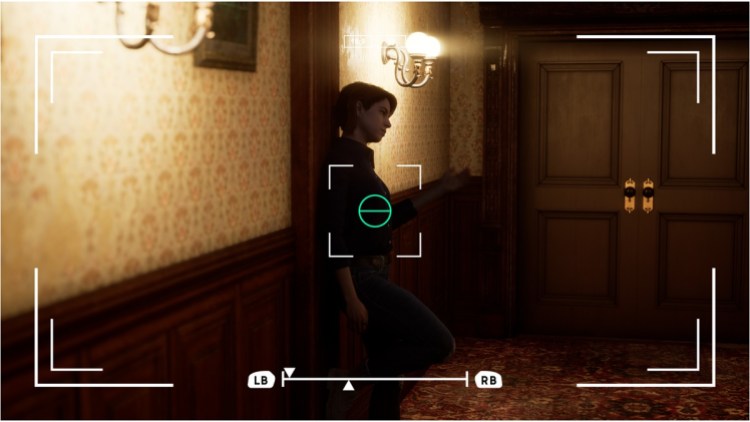 Regrettably, The Devil in Me does have some glaring flaws. Chief among these, and one of my oldest complaints, is that there’s still no way to skip cutscenes even after finishing the game. At best, you’ll simply select chapters from the menu, but you’ll need to rewatch and redo everything until you reach an important decision. Supermassive really needs to add a scene skip feature when you’ve cleared the campaign, as well as a means of making quick choices to somehow simulate earlier outcomes. There’s also the disappointing lack of the Death Rewind mechanic introduced in The Quarry, though this might be because the two games were developed simultaneously, and there’s no way to implement this change with how The Dark Pictures series is structured. I do hope these concepts make their way to the next season of releases.

Another problem I’ve seen is how the majority of the story has a tight narrative and stellar presentation. Then, just like a B-movie, it falters toward the end, and you’ll notice sloppy cuts, improbable choices, and hokey incidents. The finale and endings are certainly not as action-packed as House of Ashes, but it won’t leave you disappointed like The Quarry‘s conclusion, at the very least.

Overall, I still feel that The Devil in Me might be one of the best offerings from Supermassive. It has everything you’ve come to know and love if you’re a veteran of the series, as well as new additions that improve the gameplay. Characters feel more unique due to their tools/light sources, the atmosphere is highly unsettling, and the campaign is longer. I clocked my full run at around 10 hours, though I did reload backup saves to check out different outcomes. Whether you’ve come to accept the franchise’s downsides or you’ve become impatient, this is still one killer romp that you’ll want to experience solo or with friends. 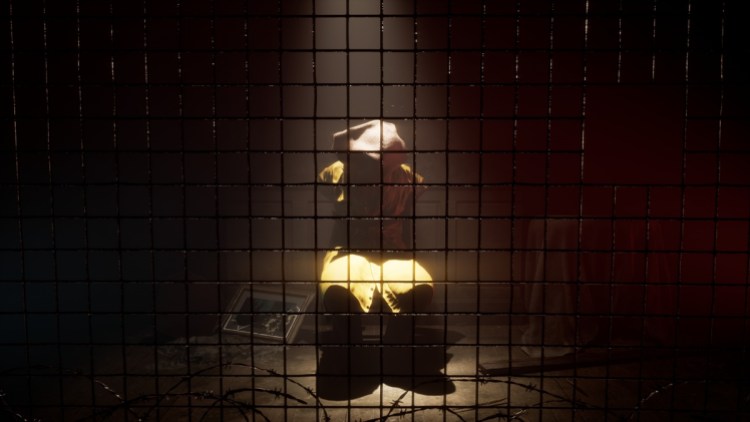 The Dark Pictures Anthology: The Devil in Me

The next game in The Dark Pictures series is set in a recreation of the infamous Murder Castle of H. H. Holmes.
9.5

With an unsettling atmosphere, gripping tension, and new actions for characters, The Devil in Me is a major improvement for the franchise. It just needs a way to skip scenes during replays to avoid the tedium.

By Dani Maddox3 days ago
Reviews