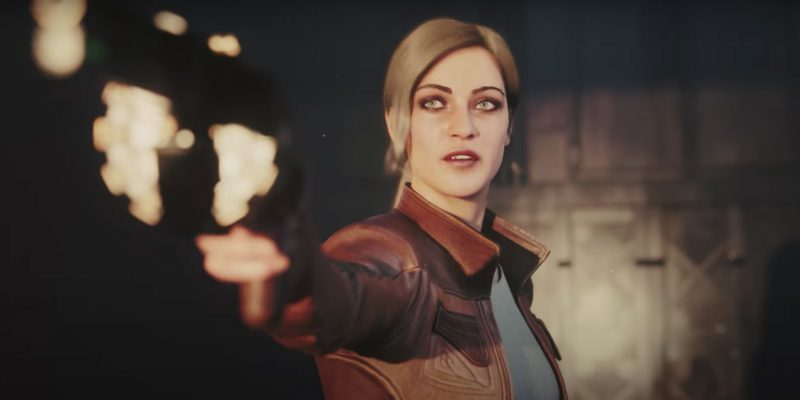 Solve a high-profile murder in the newest DLC for The Outer Worlds, Murder on Eridanos, which arrives on Steam on March 17. Someone has murdered Halcyon Helen, and you’ll need to find out whodunnit. Obsidian Entertainment unveiled a trailer for the DLC today, featuring a vintage noir mystery theme and Rizzo’s Spectrum Brown Vodka.

According to Obsidian’s blog post, The Outer Worlds: Murder on Eridanos features “the grandest murder mystery in the Halcyon colony.” Famous actress Halcyon Helen is found dead just after Rizzo names her the spokesperson for its new vodka. The killer could be anyone, so remain cautious as you explore Eridanos. There’s plenty to see on the islands, including the Grand Colonial Hotel. However, as Obsidian warns, “Be careful about the smiling employees you encounter.” They’re hiding something.

The cinematic trailer features a black-and-white noir-style atmosphere. Halcyon Helen tells the story of her run-in with The Brain Eaters and her quest to avenge her partners. At the end of the video, a mysterious figure approaches, taking Helen by surprise. Finally, a news reporter announces her death and teases a “special investigation.” Check out the full trailer below.

Murder on Eridanos will be The Outer Worlds‘ second and final expansion. It can be purchased individually or as part of the Expansion Pass discounted bundle on Steam.

Like the base game and its first DLC, The Outer Worlds: Murder on Eridanos gives players total freedom in the storyline. Every action will determine what happens next. Obsidian Entertainment Game Director Megan Starks has even revealed that you could claim to be the killer. “We’ve always felt that a core component of Obsidian RPG’s is this element of putting you in control of the story,” Starks said. It’s all up to you when the DLC arrives on March 17.