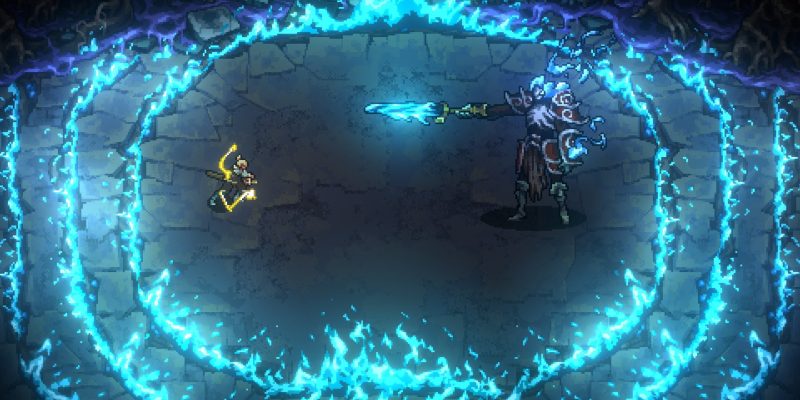 A month ago, I first noticed There Is No Light while browsing upcoming Steam games. Going by the screenshots and gameplay videos, I thought it would be right up my alley. Now, with its recent release, I’m not even sure anymore.

Talk to The Hand

There Is No Light begins with your character (later nicknamed Blondie) having a relaxing evening with his wife and newborn child. Suddenly, soldiers attack, taking the child with them. That sets your hero on a journey to kill The Hand, an entity that the cult-like populace has begun worshipping after the collapse of civilization.

You end up doing just that within the first 10 minutes, whereupon The Hand seals the entry to its chamber. Now, you’ve got to find four keys to remove the seal. This sounds like a recipe for a typical adventure. Then, it all comes crumbling down as you continue to progress. 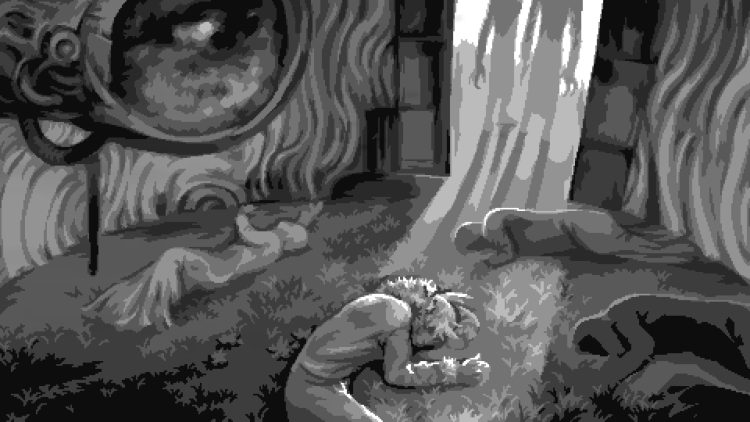 Firstly, there’s the usage of cryptic and obtuse storytelling techniques to present the world around you. This has become commonplace with games attempting to emulate Souls-like titles. In some ways, it can be a crutch, as the player has no choice but to piece together the lore and fluff, all compounded by jumbled exposition from various NPCs. Sadly, this, too, is hampered by jarring cutscenes that seem rushed, giving you no pause to ascertain what’s going on.

Secondly, I genuinely have no idea what bosses are supposed to be. Normally, you’re given just a tiny hint as to their true nature and how they relate to the overall arc. That doesn’t seem to be the case here. Is Random Boss No. 15 supposed to be a lieutenant of The Hand? Is Beefed-up Baddie No. 10 a mutated construct out for vengeance? I don’t know, because it’s as though the zones and bosses are just thrown out there for good measure. 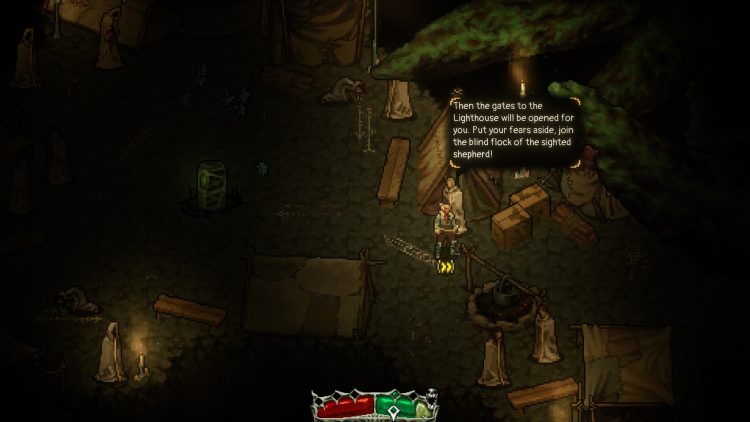 At the start of the campaign in There Is No Light, you’re given a sword. The “X” button is your normal attack, which also happens to cancel the normal moves of your enemies (i.e., red flash). The “A” button, meanwhile, is your special attack, which can be unleashed once you’ve filled up your meter via regular hits. This, too, is used to counter the abilities of your opponents (i.e., yellow flash). You’ve also got a reliable dodge, and a healing mechanic (i.e., filling a gauge via special attacks).

The above sounds simple and effective. Indeed, the combat in There Is No Light is fast-paced, fluid, and, in some situations, downright exciting. However, it can also be extremely tiresome and boring in the long run. 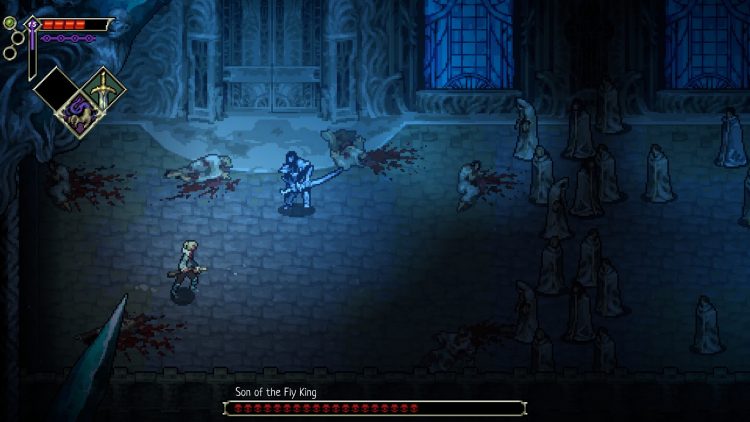 Most of the time, you’ll simply do two swipes, a dodge, then a couple of strikes again. It just so happens that bosses tend to use special attacks, which means your normal hits are there to build up your meter for your own counter. You’ll repeat this often throughout numerous encounters, leading to a rather dull and forgettable affair.

True, it’s a hack-and-slash, skill-based game, so a lot of combat is expected. Still, there should’ve been mechanics to make battles more enjoyable. As it stands, you’re stuck with a sword for several hours (until you clear a multi-stage zone to get another weapon). The armament passives aren’t particularly enticing either, and you have no means of buffing your stats or health. 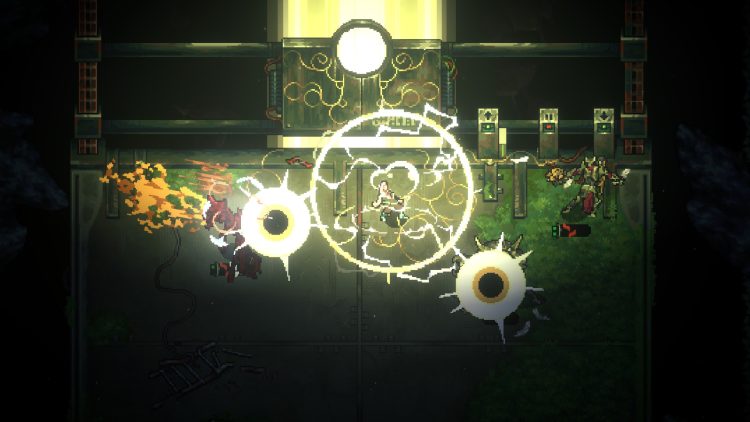 There Is No Light? More like there is no map

On a positive note, There Is No Light manages to capture a grim and tense atmosphere, presented in gorgeous, old-school pixel graphics (think Children of Morta). Areas range from those that provide a gothic feel and serene backgrounds to the more foreboding depths. Likewise, there are sceneries that have disturbing and creepy vibes that you just can’t wait until you get out of there.

Unfortunately, these get shafted once you realize that there is no map at all. While some games do succeed even without the use of a map, the way those levels are constructed shows a hint or a landmark, allowing you to remember those sections. That’s not the case here, as you’re mostly passing through samey-looking corridors or samey-looking waterways. There might be a secret or an unreachable object in a certain room, but the overall level design makes it hard to remember where they were, especially if you’re planning to revisit them later. 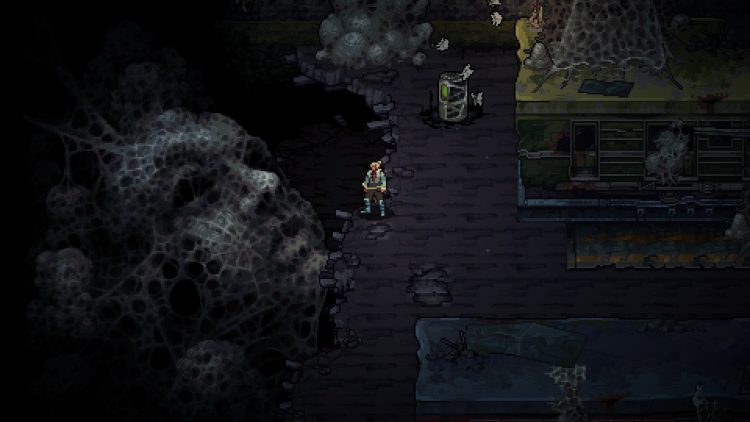 As for how the “world” is structured, there’s a central hub with four branches. Each branch has around three zones with up to 10 areas. It feels massive when looking at it broadly, though linear progression still applies, so good luck if you missed something early on.

By the time I finished the second branch, I was already spent. It just felt repetitive and a slog all throughout, with hardly any variation to keep me on my toes. 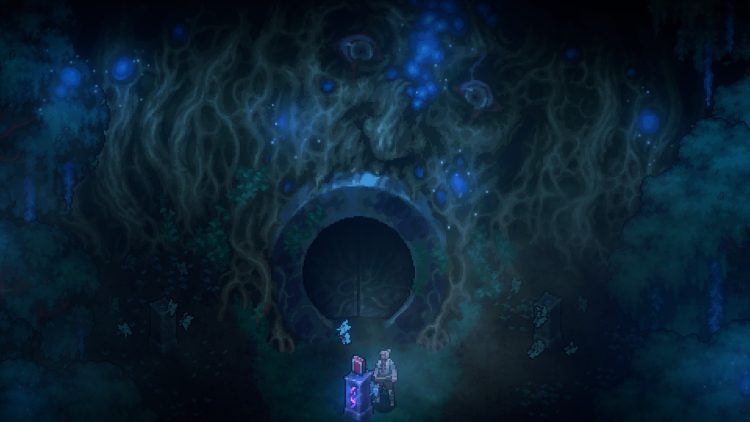 Krafton is adapting the Korean novel, The Bird That Drinks Tears, into horror game

Soulstice — Quick tips to get you started

By Martynas Klimas18 hours ago
Previews