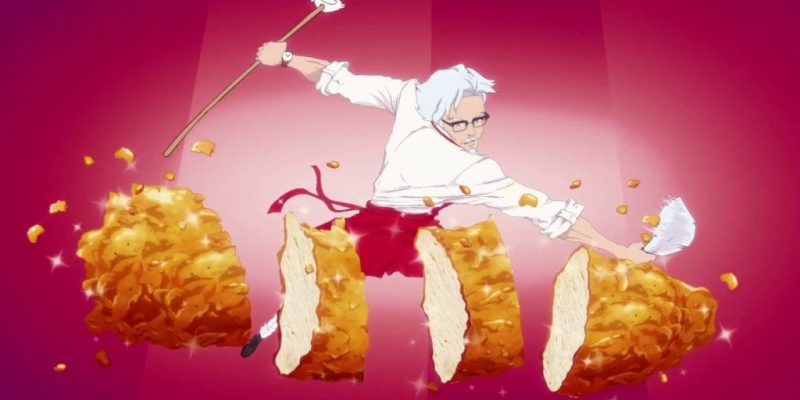 I’m sorry, but Lady Dimitrescu isn’t real. She can’t tower over and demean you with blood on her lips and dress. In fact, there’s no chance you’ll ever meet an over-nine-foot-tall vampire woman. Sorry, it’s the truth. But you may be able to get just a bit closer to that fantasy thanks to, of all things, KFC. A new KFC Dating Sim game may be in the works, and if the KFC Gaming Twitter account is to be believed, it will feature Resident Evil Village‘s Lady Dimitrescu.

The first KFC Dating Sim came out in 2019, so it’s about time we got a sequel. However, that title tasked players with courting the Colonel himself, while this game looks to be taking a different approach. Of course, there are no details, but the picture posted along with KFC Gaming’s tweet features both the anime-styled Colonel and Lady Dimitrescu. With this picture in mind, there are only two gameplay possibilities that come to mind. The first has players deciding who to date, the lady or the fried chicken magnate. The other would have users play as either character and try to go out with the other. Either way, it’s sure to be an experience full of romance, mashed potatoes, and secret spices.

When it comes out, or really if it comes out, we already have an idea of how a second KFC Dating Sim will play. Assuming the formula doesn’t change, and KFC isn’t one to change its formulas, there will be multiple NPCs to befriend and cooking challenges to complete. Here’s hoping players won’t have to cook for Lady Dimitrescu, I have a feeling her appetite may crank up the game’s age rating.

A tall order to say the least… pic.twitter.com/RLie5R4hTO

Of course, this could also just be a big joke. The internet has been obsessed with the extra-large vampiress since her reveal, and just about everyone is trying to capitalize. We’ll just have to wait and see if the Colonel and Lady Dimitrescu really do end up in a game together.

Prince of Persia: The Sands of Time Remake has been indefinitely delayed