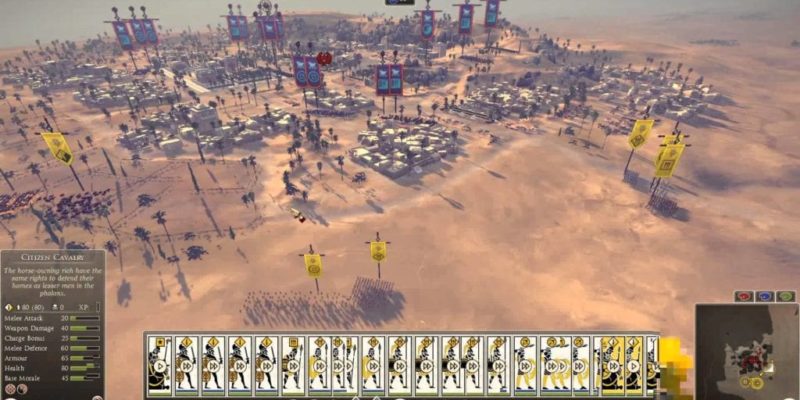 Like one of the multitude of tiny factions spread across its vast campaign map, Total War: Rome 2 has found itself assailed on all sides by rampaging technical problems, militant tribes of AI issues and the bewitching obscurity of mysterious and ill-explained new features. If you’re one of the people who pre-ordered or purchased the game, you’ll be well aware that Creative Assembly’s latest series entry has the feeling of a game that launched itself onto the world stage too soon.

That probably sounds familiar, because (to greater or lesser degrees,) this process has been repeating since the release of the original Shogun: Total War in 1999. Troubles peaked with Empire: Total War, a game issued in such an untested state that AI opponents were literally unable to attack the human player across any expanse of sea. This, despite the much-hyped addition of exciting ocean warfare.

It’s pretty clear why this keeps occurring. Creative director Mike Simpson practically spelled it out in a post-Empire blog entry from November 2009, in which he wrote:

We do however also have another customer who we make the game for, and in one particular way they are the most important of all. It’s our publisher [SEGA], who is driven by the grim necessity of commercial reality. Those necessities tend to be short term compared with the dev time of a game or the lifetime of a series. They are also necessities that we cannot ignore – if we do it’s Game Over. Empire: Total War happened the only way it could – it had to be in a box in Feb 09.

Judging by the current condition of Total War: Rome 2, you could switch the name in that last sentence and change the box (Steam) date to September 2013. I have some sympathy for Simpson and his studio, because the words have a weary truth to them. Looming large over Rome 2‘s list of problems is SEGA; a medium-sized publisher eager to maintain a recent upturn in financial fortunes. It appears the publisher spotted a relatively quiet, pre-GTA V September and decreed that the title must launch in this window.

Perhaps as a result of that pressure, technical issues that seem to have little care for a player’s particular PC parts are rampant. From the mightiest processor and double Nvidia Titans setup to the barest minimum of required specs, people have reported serious FPS problems at both campaign and battle map levels. This, along with overblown load times, tortuous AI turn times and weird graphical glitches galore. I’ve fallen foul of a fair few of these myself, including a horrendously sluggish campaign map that a pair of hopeful patches have so far done nothing to fix (the only thing that’s had any positive effect to date is this bizarre DirectX-based solution.)

Of all Total War: Rome 2‘s issues though, I’m most optimistic about the technical ones being fixed. When I previewed an early build of the game back in August the situation was actually even worse, with regular crashes during battles and some lighting models that were apparently completely unfinished. In the time between versions, Creative Assembly has at least managed to slightly improve on that situation.

AI troubles, a long-standing thorn in the Total War side, may be somewhat harder to address. As I noted in the preview, some of this stuff dates back from the earliest titles in the series. Pathfinding around large obstacles like city walls is still a problem, but it’s some newer additions that are causing the AI bother too. Siege battles give it particular trouble, as it tends to either send one unit at a time up towards the gates (for you to pick off systematically with missile weapons,) or simply attempt to beeline for the main siege capture point, and get cut down as it ignores everything in its way.

Disembarking from boats in combined sea/land clashes charges also causes the AI a lot of stress, often resulting in its units milling around on beaches with no clear plan of action. Maybe they just love sandcastles? It seems to like charging soldiers at player units and then turning away at the last second, too. This is less a clever ploy to draw out your men and more a demonstration of total confusion.

A word on the stand-alone naval battles: these are frankly bizarre, quickly devolving into a sort of ocean-going version of bumper cars where (supposedly) weaker troop transports seem to wield as much, if not more, power than purpose built seafaring vessels.

On the campaign map, the AI doesn’t fare much better. The new economic system (more on this later) seems to baffle the AI so much that it’ll either build massive stacks of cheap spearmen and slingers or a decent mixture of just five or six units. Occasionally, it gets itself in such a mess that its armies are literally starving due to attrition. Those smaller stacks I just mentioned? The AI loves sending those on suicide missions, repeatedly breaking them against the player’s heavily defended cities to no discernable effect. Nobody is expecting the AI to be a regular match for a human player in an even-numbered fight, but the current level of incompetence is a little ridiculous.

These problems persist no matter what the difficulty level. “Legendary” allows the AI to cheat a little more and seems to make it more aggressive (perhaps by modifying what resources it has access to,) but it otherwise suffers from the exact same flaws.

By Logan Broadley12 hours ago
Reviews