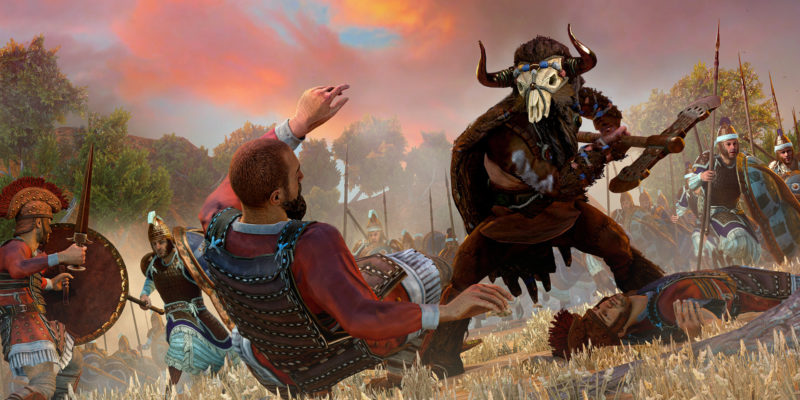 Homer’s Iliad, Odyssey, and Greek Mythology in its entirety are all steeped in tales of legendary creatures. In Total War Saga: Troy, you’ll get to recruit some of these mythological creatures such as cyclopes, minotaurs, sirens, gorgons, and more. Some of them act as battlefield units while others are considered “epic agents.” Here’s our guide to help you out. 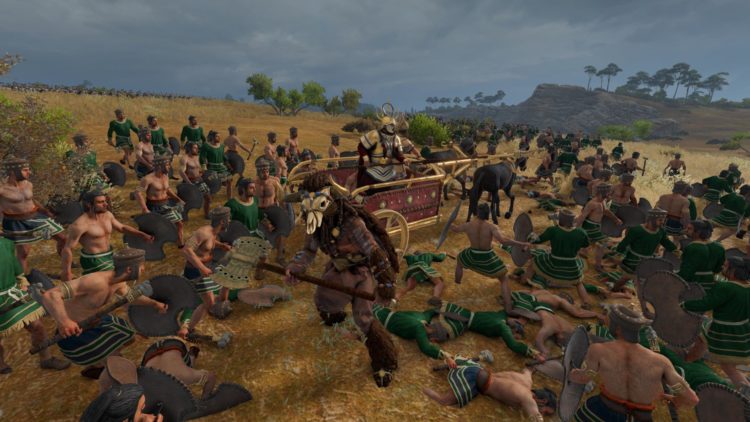 Total War Saga: Troy focuses on a “truth behind the myth” approach. As mentioned in our official review, these mythological creatures are just man-sized troops or agents, akin to Bronze Age cosplayers, and they might not please those who are looking for a full-on fantastical depiction.

I digress. The point here is that you can recruit them during your Total War Saga: Troy campaigns, but there are a few requirements:

(1) Some mythological creatures can be recruited from specific settlements (marked with an icon). If you capture that settlement, you’ll see a notification telling you about “exceptional warriors.” In turn, you’ll need to construct a special building (yellow line) that enables the recruitment of these troops, although their numbers are limited. Here are some examples (these are all combat units): 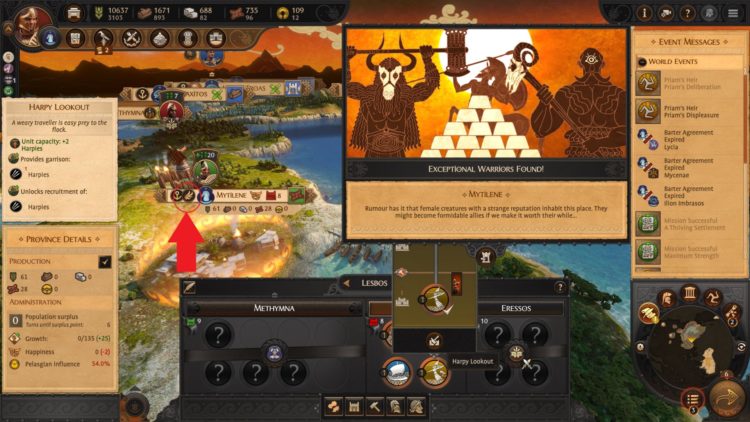 (2) Reaching the maximum cult tier (Worshipped) for a particular god or goddess via the Divine Will mechanic unlocks the recruitment of a specific mythological creature. They can be recruited in any settlement (epic agents) or by any army (combat units). For the latter, the number of recruits is still limited by the settlements you own.

These are the combat units:

These are the epic agents (which I’ll also discuss in detail later):

Note: You can learn more about other unlocks and some tips for your Total War Saga: Troy campaign in our Divine Will/gods and goddesses guide. 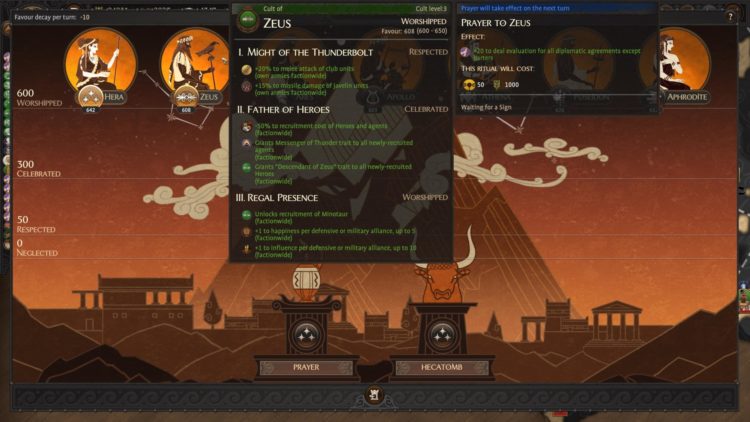 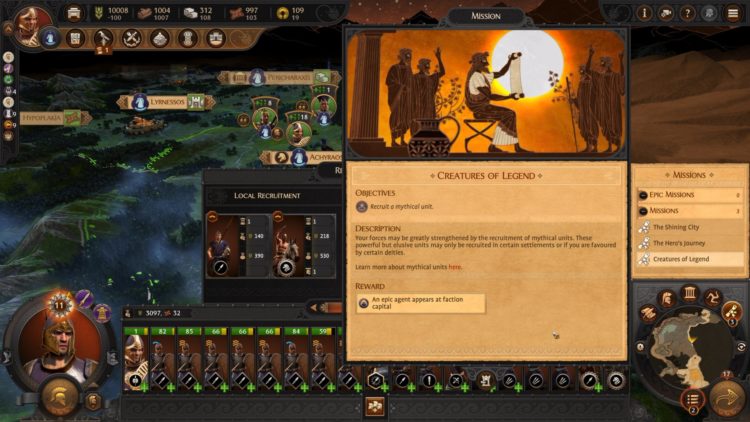 Epic agents for Homer’s epic in this Epic Games exclusive

Your generals and the game itself sure love to mention the word “epic” for some reason. I don’t know if this has anything to do with Total War Saga: Troy‘s timed exclusivity.

Anyway, here are additional tidbits that you need to know about the epic agents:

Here are their abilities: 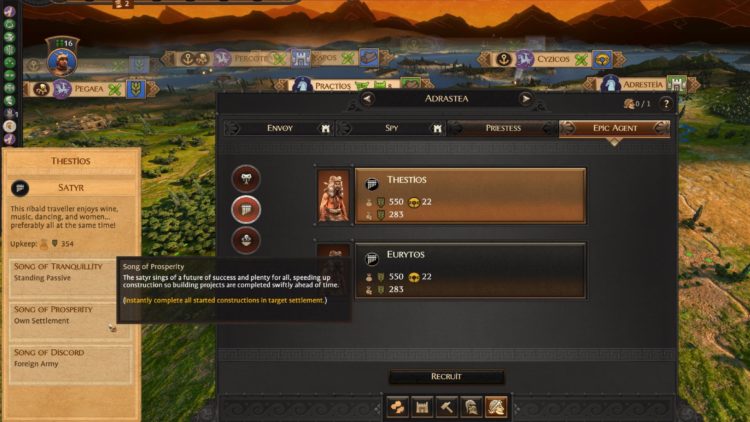 Epic agents are cheap to recruit (a bit of food and gold), and they also have low food upkeep, so use them to your advantage whenever you can. They’ll definitely help you succeed in Total War Saga: Troy‘s campaigns. Here are some additional tips:

I’m not really too fond of gorgons (really, who is?), but Frightening Visage is useful if you want to wreck a garrison easily. Do remember that the city of Troy can’t be affected by any agent actions (including gorgon abilities).

Satyrs are nice to have one you’ve captured a resource-rich province. Have one boost happiness and growth, then, once you’re constructing buildings that’d take a while, turn your satyr into Civilization’s Great Engineer.

Seers tend to be my favorite. The passive XP gains might not mean much, but Ritual of the True Sight is a godsend (pun intended) when you want to max out a deity’s cult ASAP. Additionally, she gets the Divine Errand mini-quest which provides massive XP boosts. Just be careful because the target region might be too far away if you’re unlucky, and she won’t be able to reach it in time. 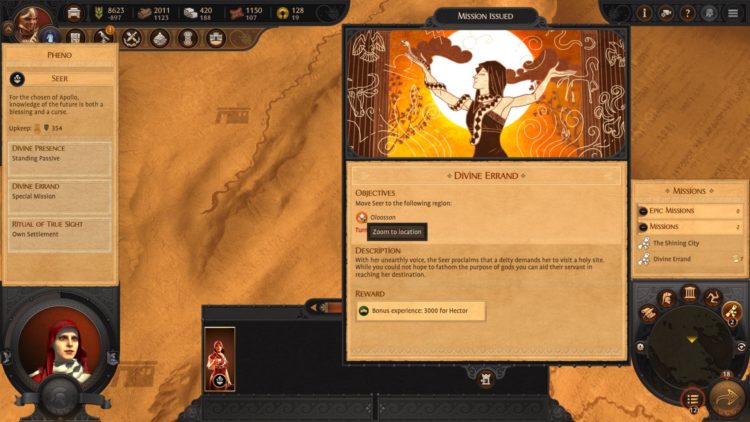 Total War Saga: Troy is available via the Epic Games Store. For more information, check out our guides and features hub.