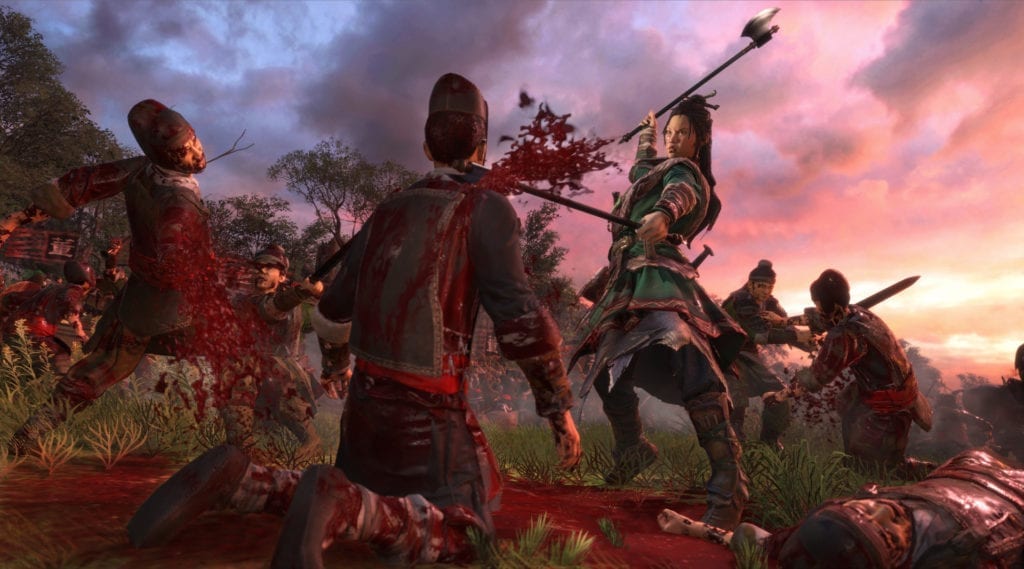 If you’ve been taking a look at some of our guides and features, then you’ll know that I’ve been quite busy with Total War: Three Kingdoms. Creative Assembly’s latest strategy game, focusing on the Three Kingdoms period of China and Luo Guanzhong’s Romance of the Three Kingdoms novel (“San Guo Yan Yi“) has been a spectacular experience as noted in our official review. Today, you’ll be able to do something extra. You can paint the town red with the release of the Reign of Blood DLC.

You can even scale the blood particles and blood stains onscreen via the advanced graphics settings. Setting blood particles higher would be okay to make the visuals grittier. However, blood stains at higher values would make some of your characters barely recognizable. 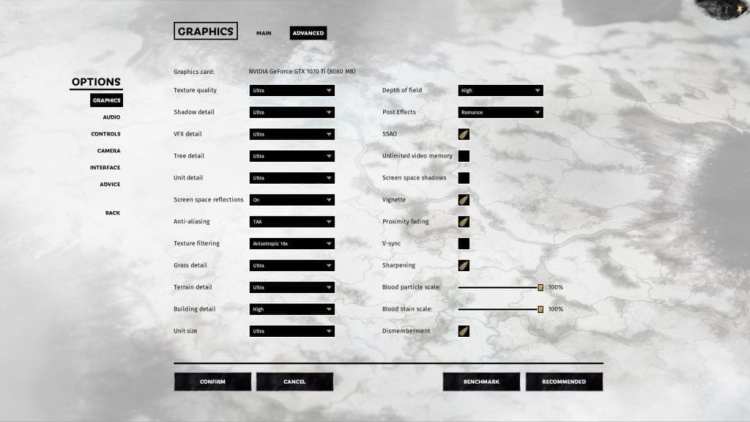 One of the reasons I’m particularly interested in seeing this content for Total War: Three Kingdoms is because I grew up on Koei Tecmo’s games. Let’s face it, the Romance of the Three Kingdoms and Dynasty Warriors franchises were never known for depicting over-the-top violence. The former was all about management and empire building, and the latter was akin to an anime hack-and-slash. Nothing wrong with those, but, hey, war is war.

Creative Assembly’s offering provides the opportunity to view the period and setting, one that’s rife with battles, conflicts, and deaths, in a more mature light. Oh, and yes, seeing the great heroes of the age beheading or chopping rival officers would be a surprise.

I spent the last hour getting several images that look downright mesmerizing and, at times, equally disturbing as well. Here are some of them: 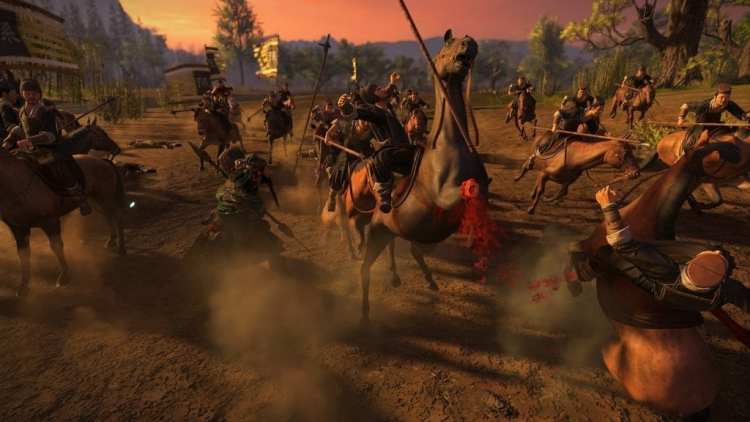 Blood particles at 30 percent/blood stains at 20 percent: Lopping off the legs of horses to take out cavalry units. 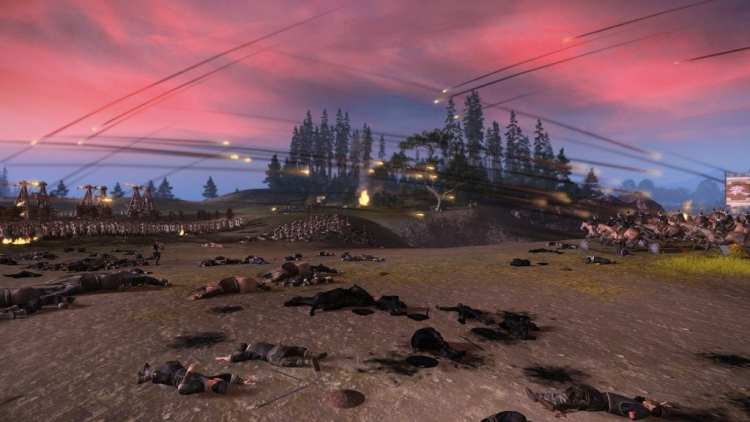 Blood particles at 30 percent/blood stains at 20 percent: Charred corpses during a battle thanks to fire arrows. 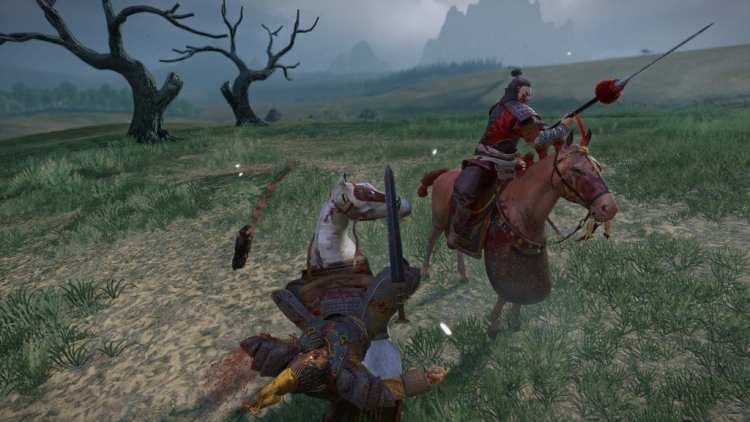 Blood particles at 30 percent/blood stains at 20 percent: Put some Vaseline on that arm, you vassalizing fool! 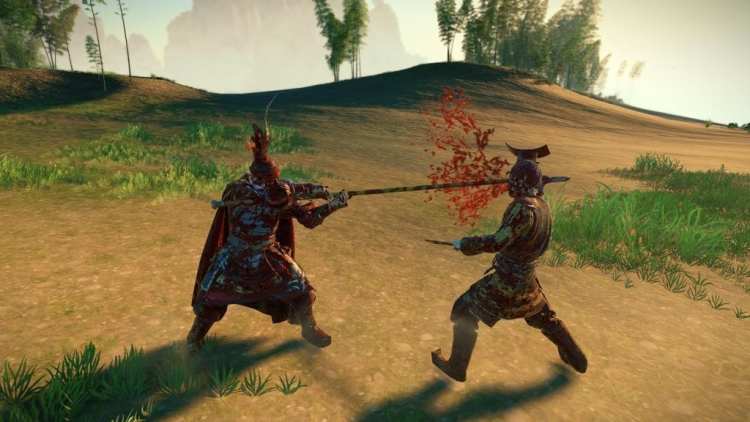 Blood particles at 100 percent/blood stains at 75 percent: Liu Zhang tried to pursue Lu Bu. It did not end well for him. The stab to the head animation is usually followed by decapitation, with the head being flung away from the weapon. 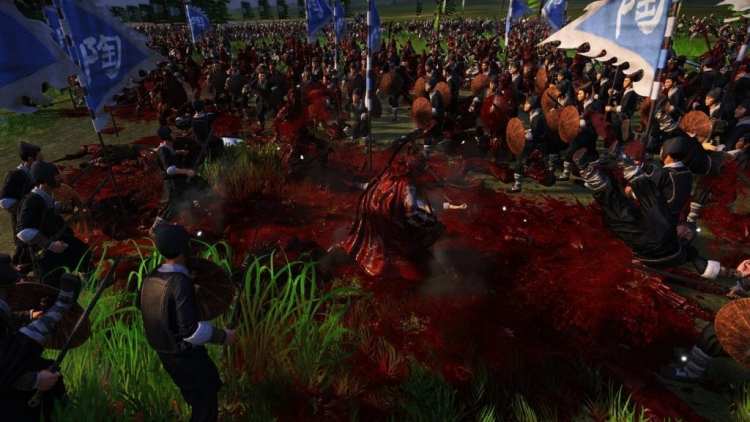 Blood particles and blood stains cranked up to 100 percent: That’s Sun Ren and Zheng Jiang. Again, if you have blood stains on the extreme end of the scale, you’d barely recognize your heroes. I knew Sun Ren/Shang Xiang’s motif in Dynasty Warriors was red since that was the color of Wu… but this was too much.

The “fatalities” can occur whenever an officer’s health is low and they end up taking damage. I’ve yet to check how this would affect a Romance Mode campaign given that you have legendary characters that can survive getting wounded in battle. But, you won’t necessarily consider getting your head chopped off as just a flesh wound, eh?

The Reign of Blood DLC, like all past “Blood Packs” or “Blood DLC” that came before it, has a higher age rating than the base game. It would require a separate purchase. You can buy it for $2.99 via the Steam store page.

For more Total War: Three Kingdoms beginner’s guides, faction guides, and features, you can take a look at our massive hub right over here.

Pirates Of First Star review – Delivering both creativity and heart

Cyberpunk 2077 is pursuing the ideal of open-ended gameplay