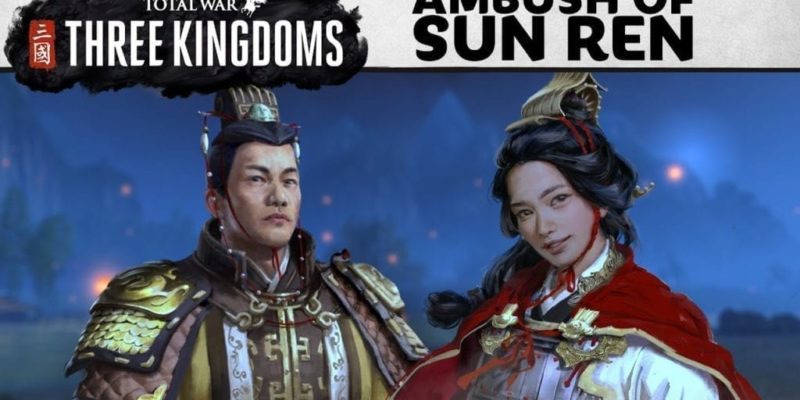 “Gorgeous!” That’s the first word Liu Bei said when he first laid eyes on Sun Ren. The daughter of Sun Jian, the Tiger of Jiangdong, is also known as Sun Shang Xiang to many Dynasty Warriors fans. Liu Bei was said to be both enamored and intimidated by her. Women in Han Dynasty China weren’t known for wearing full suits of armor or being surrounded by female bodyguards.

“Gorgeous” would also be an apt term to describe the latest gameplay video depicting The Ambush of Sun Ren. The video, revealed at GamesCom earlier today, showcases night battles and a campaign narration for Total War: Three Kingdoms.

The video starts off with a narration of events that have transpired in your campaign. Sun Ren tells us of how the three great heroes of the time, Liu Bei, Cao Cao, and Sun Jian thwarted Dong Zhuo’s tyranny. However, that alliance would not last. Although Liu Bei and Sun Jian’s son, Sun Quan, were bound by mutual treaties and a royal marriage (Bei and Ren got shipped), a conflict was on the horizon. Sun Quan and Cao Cao will battle for control of Central China.

According to Creative Assembly representative, Grace_CA, the campaign flyover “tells the story so far as it could play out in your game.” Even though this is only a demo, we’re hoping that the narration extends to each and every major event that plays out whenever you load a save. After all, “as it could play out” is generally taken to mean that you transform the Three Kingdoms sandbox through your actions.

Apart from that, we get to the meat of the action — night battles. The Ambush of Sun Ren displays Total War: Three Kingdoms in its glory. The beautiful landscape, crisp models, fire effects, lanterns, and yes, banner carriers! We also see Sun Ren showcase her martial might by beating… uhh… wow, she just killed Zhang Liao in a duel! Wait, she killed Xu Huang too! What the hell?

So yes, it’s just a demo and somewhat ahistorical just to give fans a glimpse of the action in night battles. Sun Ren, though she was a fierce and tomboyish woman, didn’t beat the top generals in fights. It was her Dynasty Warriors iteration that was able to clear out thousands of troops. We’re kinda hoping Three Kingdoms doesn’t go way over the top like that.

Still, with this reveal, we’re finally seeing how Total War: Three Kingdoms would shape up. Day and night cycles have also been mentioned — a first for the series. Duels will play a major role in affecting the outcome of a battle much like in the novel. We’ll know more as Creative Assembly share some juicy tidbits about the game. As usual, PC Invasion will have you covered.