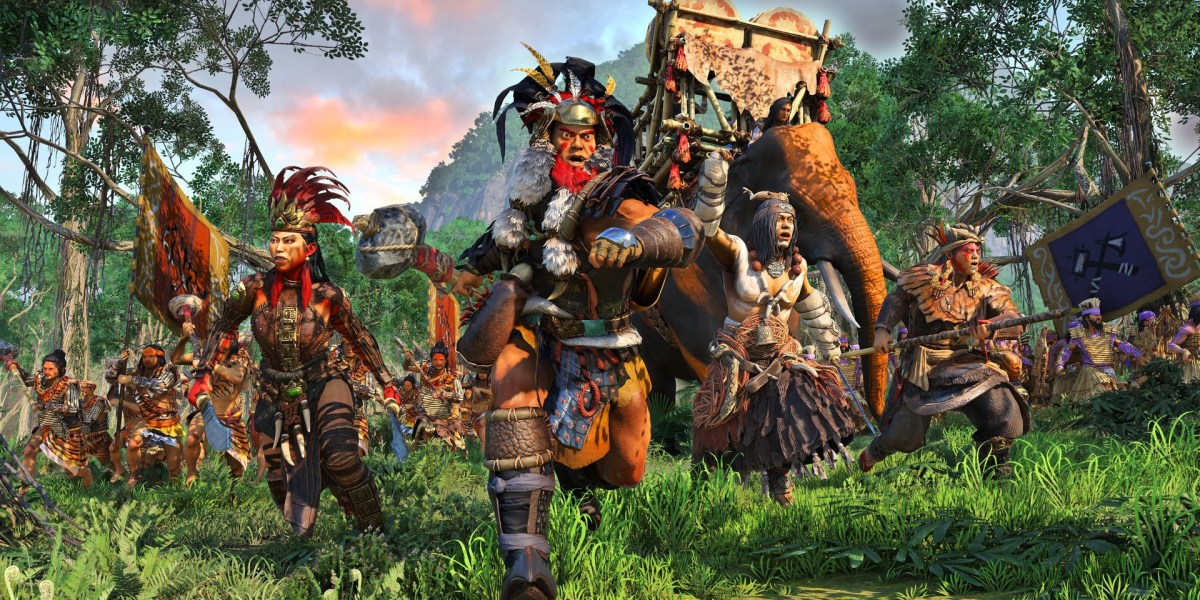 Total War: Three Kingdoms – The Furious Wild releases on September 3 via Steam. I must admit that I was gosh darn excited when it was originally announced that we’d have an expansion that focuses on the Nanman and Meng Huo. Then, as I continued to review The Furious Wild, a few problems became apparent. Before we get to those, let’s discuss the roles that the Nanman played in the setting.

The Nanman were a loose confederation of peoples who were ethnically different from the Han. In Luo Guanzhong’s Romance of the Three Kingdoms, they rebelled against the rule of the Kingdom of Shu-Han. That led to Zhuge Liang’s Southern Campaign where the great strategist emerged victorious. The whole fiasco lasted a couple of chapters in the novel, most notably telling the exploits (and pitfalls) of King Meng Huo, the fire goddess Zhurong, King Mulu, and many others. 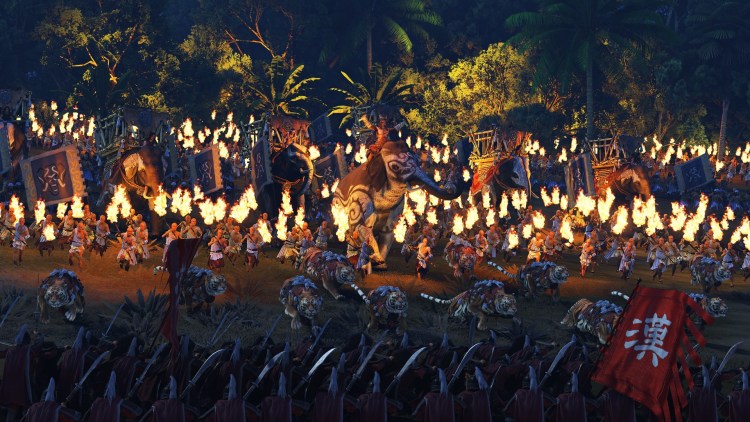 Say hello to the Nanman

From the get-go, you’ll notice how the campaign is quite different from what you’ve grown accustomed to in Total War: Three Kingdoms. The Furious Wild‘s Nanman leaders will experience most of the action in the southwestern portion of the map, a region that’s filled with dense jungles and swamp-lands. Indeed, the greater conflict of the age will hardly bother you even if various Han lords come knocking on your doorstep many turns later.

Your main goal here is to unite the tribes. In order to do this, Nanman leaders are able to confederate, vassalize, or completely destroy non-playable tribal factions to earn their boons or fealties. Each tribe you defeat provides you with certain buffs for the campaign. 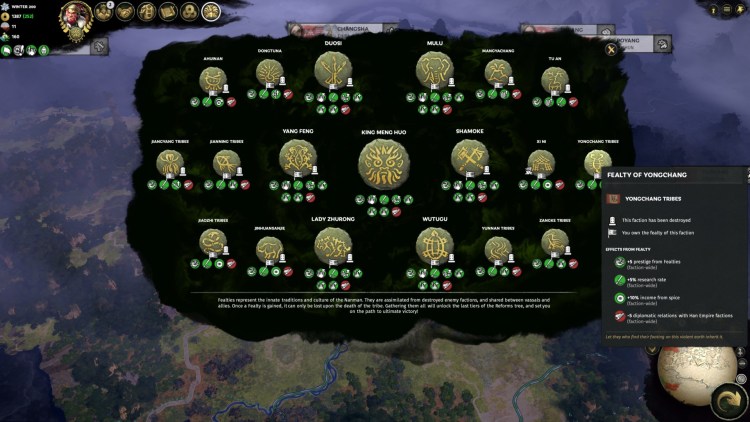 To say that the Nanman characters are unique would be an understatement. It’s not just their start locations, but also their technology tree, buildings, means of leveling, and animal units such as tigers and elephants. For the leveling process, the Nanman don’t gain skills the same way as Han, bandit, or Yellow Turban characters do. Rather, they’re able to allocate skill points to increase their class/stats (i.e., Sentinel/expertise or Commander/authority).

As for skills and perks, the new leaders gain these by completing various tallies. Examples include fighting 10 siege battles to gain +15% campaign movement range or winning 10 defensive battles to enable the “Disciplined” trait for your retinue. Some of these tallies are easy to complete as you go along; others, meanwhile, are annoying to obtain—I mean, would you really have “defensive battles” or “ambush battles” as a primary goal? As such, it does become a chore when you’re only passively gaining perks while actively increasing attributes.

At the very least, the Nanman characters can be very powerful in terms of stats alone. During my Meng Huo playthrough on Romance Mode and the very hard (VH/VH) difficulty, I had several officers with 100+ points in two or even three categories. 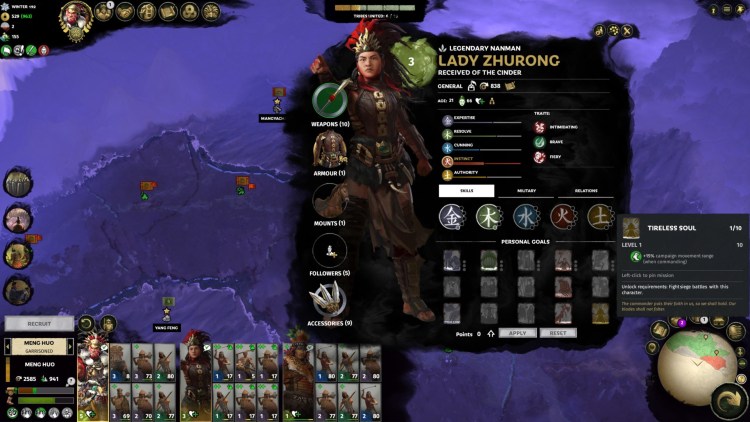 Another major change is how the Nanman factions unlock techs. The first one lets you recruit elephant units (though these are limited in number). From there, you’ll choose from three branches: domestics (mostly building upgrades), military (mustering turns, replenishment, and additional special units), or diplomacy (trading, research, and diplomatic relations). Some nodes will also prevent you from choosing their counterparts, so you need to be mindful of your picks.

A key concept here is that many techs are locked behind missions, additional tasks you can complete during your Total War: Three Kingdoms playthrough. These are mostly generic actions such as reaching level 5 with any general or constructing a certain building. Again, it’s somewhat passive. In some cases, I didn’t even realize that I had already completed a particular objective beforehand.

The Nanman buildings, though, are very powerful. For instance, the Sites of Worship branch boosts your prestige, population growth, and public order all while lowering corruption. The same could also be said when it comes to their officer assignments (which are locked behind particular techs). 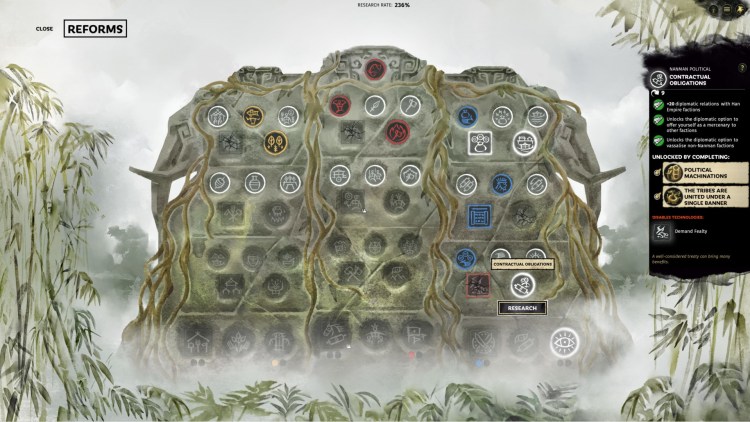 Where it all comes tumbling down

The Nanman’s unique capabilities in Total War: Three Kingdoms – The Furious Wild are balanced out by their abysmal boons from council positions. When assigned as administrators (or “cave lords” in this case), they’ll simply lower construction costs. Then again, I was surprised when I finally captured and employed Han characters. Apparently, they, too, lost their administrator buffs. Imagine assigning a strategist with +40% income from commerce, silk, and spice, only to realize that they just lowered construction costs like the other Nanman officers.

This seems to be an issue until characters are actually assigned to positions. During the selection process, their bonuses won’t show up at all and you’re left guessing what they actually provide until they become administrators. If you pick the wrong character, you’ll need to boot them out which leads to an opinion malus. Alternatively, you could check all the skills, traits, and ancillaries they have and gauge accordingly, but that’s a hassle.

Going further, the problems also have something to do with the region itself. The dense jungles and swamp-lands in Nanman-held territory can be atrocious to navigate. In Koei Tecmo’s Romance of the Three Kingdoms games, these were places you wanted to avoid or not waste a lot of time on due to attrition or poisons. Here in The Furious Wild, you’ll find yourself spending several turns just to get from point A to point B. It didn’t help matters that armies often lacked supplies and movement points. I’m guessing it’s due to the terrain itself combined with many generals who have a very low cunning stat, or something else entirely. What could’ve been an exciting campaign quickly turned into a slog. 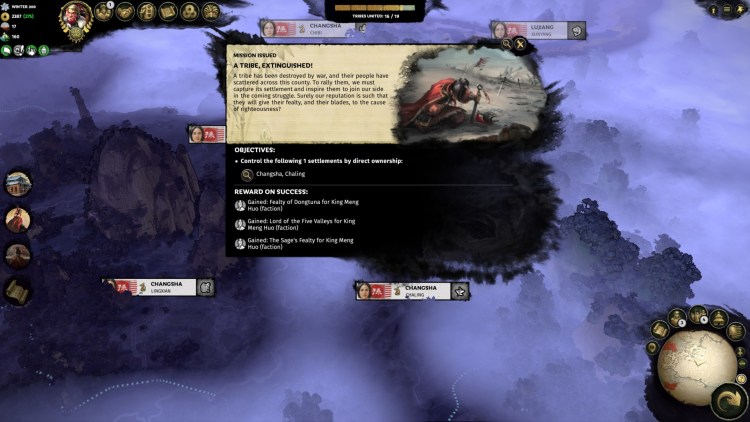 Victory for Meng Huo and probably someone else

As mentioned earlier, Nanman leaders in Total War: Three Kingdoms – The Furious Wild need to unite disparate tribes to become the ruler of the south. You’re also required to control all 21 Nanman-type settlements, and then a few more until you reach 50 settlements in total. After that, you need to wait for 20 turns until you achieve victory.

Sure, you could continue aggressively expanding, but I found that it was fruitless since it’s better to just defend and ensure that a random opponent or rebellion doesn’t take a single settlement away from you. You’ll probably need to survive the onslaught and weather the storm just in case of a few surprises or because the Han lords are already angry with you.

By the time I finished the campaign as Meng Huo, I was tired. Although I did attempt another run, this time as Lady Zhurong, it was almost unnecessary. Barring a few differences with innate perks, her starting region and campaign goals were no different from her husband’s. 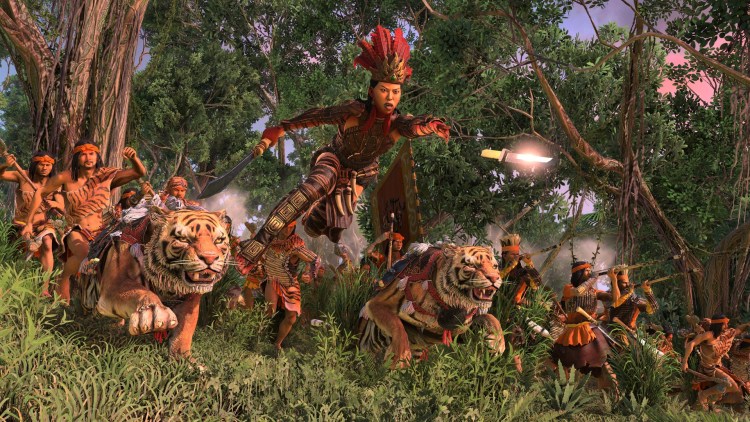 Are Meng Huo and co. worth your while?

Regrettably, from a strategic standpoint, I can’t help but feel underwhelmed with Total War: Three Kingdoms – The Furious Wild. The pacing simply feels off—from a race to defeat as many tribes to conquering 50 settlements, you’re suddenly switching to a waiting game. Combine this with inexplicably low movement range and supplies, and it becomes an oddity indeed. Replayability, in my opinion, also suffers—the Nanman leaders will have samey progression and incidents to deal with. It’s likely that Shi Xie and Sun Ce will be your early game rivals, and you’ll work your way from there. In my case, I ended up seeing strange occurrences where Cao Cao or Yuan Shao started heading down the jungles just to pick a fight. It’s like they have a super weird obsession with eliminating enemies that are too far away.

Still, one could easily appreciate the effort that Creative Assembly had in crafting this. The unique mechanics are treats that can entertain you for a while. You’ve even got blowdart ranged units, tiger handlers, and elephants running amok. Plus, there’s the free update that expands the map and adds gate battles, Shi Xie (as an FLC lord), and juggernauts. These are all welcome inclusions.

I can’t tell you how ridiculously awesome it is to start charging with elephants and tigers, all while juggernaut flamethrowers scorch the battlefield. These new additions offer refreshing dynamics for the tactical side of things even if the strategic aspect has a few shortcomings. 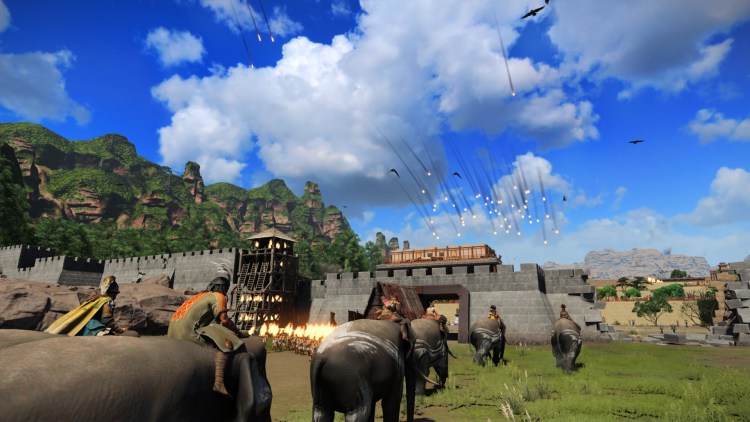 The next DLC for Total War: Three Kingdoms adds four new leaders from the Nanman tribes.
7.5

Total War: Three Kingdoms - The Furious Wild lets you run amok with the Nanman led by Meng Huo and others. The downside is that the campaign can turn into a slog and then a long waiting game. Replayability also suffers due to all leaders starting from the same region and having similar objectives and progression paths. Still, the unique perks, mechanics, and animal units offer refreshing dynamics in tactical battles.