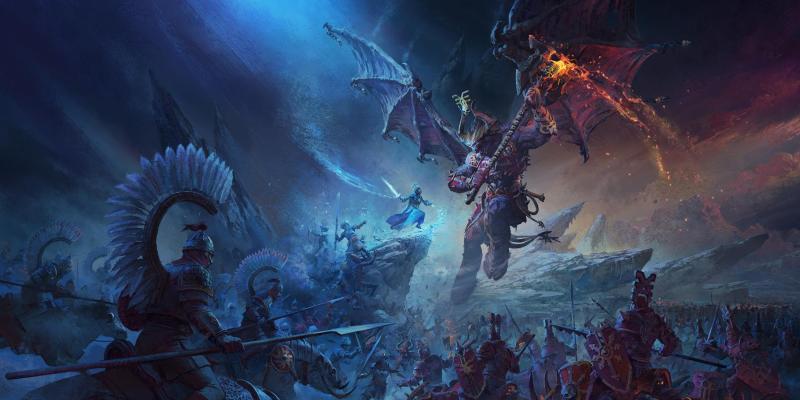 Total War: Warhammer III allows you to defend the world against the encroaching daemon tide. Alternatively, you can burn everything to the ground as Chaos. There’s a lot in store, and an even bigger vision for Creative Assembly considering that this is the culmination of the trilogy. As such, I interviewed Jim Whitson (Lead Battle Designer) and Mark Sinclair (Lead Campaign Designer) regarding the development and future plans for Total War: Warhammer III‘s development.

Note: This article is part of our Total War: Warhammer III preview series. You can also take a look at the Daemon Prince/Legion of Chaos, Realm of Chaos mechanics/campaign structure, and Grand Cathay/Miao Ying.

PCI: The introduction of the Daemon Prince leading a Chaos Undivided faction was quite a surprise. Can you tell me about the brainstorming process behind that?

Sinclair: It was always something that we wanted to do very early on. We knew we wanted to represent the Daemons of Chaos in Total War: Warhammer III. There were three ways that we could do it. We could either represent them as one race as just Chaos Undivided or we could do monogods. And then there’s the third option — the hardest option but definitely the best one — which was to do both. We could represent them individually and as a single race led by the Daemon Prince. Everyone really contributed to it, and I think we really nailed it.

Whitson: The Daemons of Chaos army books essentially combine four playable races into one. And yet there’s enough content there available in terms of units, spell lores, and characters to really support a standalone race [for each Chaos God]. The good thing about monogods is that we could give players an understanding as to what makes each god tick and the differences between them. Meanwhile, the Daemon Prince allows us to [have different units from other gods] in a single force. We could also add a mix of unlockable campaign features and RPG mechanics to it.

PCI: The Daemon Prince is an original, customizable character with multiple equipment slots and unlockable items. It’s like a kitbashed amalgamation, or playing Diablo but you’re also Diablo. Likewise, he’s able to recruit many units from the monogod factions, as well as use certain mechanics. How did you plan ahead, and did you feel that extensive design may detract from what the monogod experience offers?

Sinclair: It was definitely a concern we had. To that end, we’ve ensured that monogod factions have powerful features that the Daemon Prince doesn’t have access to. For instance, Tzeentch has the Changing of the Ways and you can use it to steal settlements. At the same time, the Daemon Prince does have access to a lot of units, but you really have to play a certain way, dedicating your offerings to specific gods, how you sacrifice captives, and basically a lot of effort just to get the high-tier units. 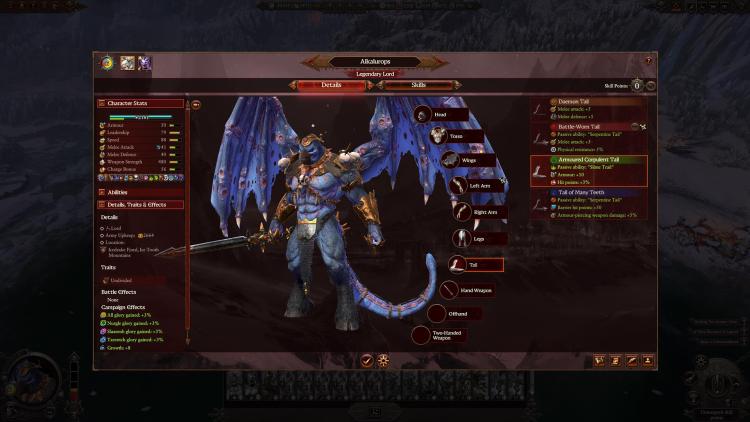 The Campaign and the Realms of Chaos

PCI: The first thing I noticed while playing the Total War: Warhammer III campaign was that there’s a lot of micromanagement involved. You’ve got to watch out for what’s happening in your territories (i.e., getting attacked by rebels or rogue armies spawned by Rifts). Likewise, you’ll need to look at the nearby provinces that you have to conquer. Lastly, there’s the Realm of Chaos that requires your legendary lord’s army. Was the original plan to focus on intensive micromanagement on a strategic level?

Sinclair: Our goal was to get that “one more turn” feeling. We want to have [multiple options] as to how you’ll approach the campaign. We didn’t want to make more of the same, and we wanted campaign gameplay that was unlike anything else that we’ve done. But, at the same time, we realize that it can be tougher to manage especially later on. That’s why we’ve added quality of life changes such as auto-managing your settlements and character skill points.

PCI: When I saw the Realm of Chaos event/decision, I was quite far from a Rift and I had to replenish my army’s casualties for a couple of turns. I chose Slaanesh’s realm and saw that Katarin was already two circles down. She was ahead of me and it was impossible to catch up. She got to the center first to complete the Survival Battle there, and I got booted out of that realm.

Sinclair: Yes, the Slaanesh Realm of Chaos is a tricky one especially if the AI gets there first. But that’s something that we’ve learned from Total War: Warhammer II — a chance for players to lose against the AI. We didn’t want a snowball effect where you got to the end of the game, but you actually won 50 turns earlier. We want players to have that sense of urgency. Also, we designed each realm to be different, with Khorne’s realm being more ideal if you go in late. It’s all about fighting when you’re in there, so you could kick out another faction’s army if they’re already weakened.

Whitson: There’s another factor since you mentioned Slaanesh, and that’s how he tries to tempt you with powerful rewards. So, if you see that you can’t overtake the AI, then maybe it’s better to choose the reward instead.

PCI: I did accept Slaanesh’s reward since there was no way I’d get ahead of Katarin. When I did check my lord’s panel, I saw that I had several debuffs even as a Daemon Prince.

Whitson: That’s one of the features we added since the Realms of the Chaos Gods shouldn’t be taken lightly. You’re going to come out with some negative traits when you leave, but we have included mechanics in place to help players overcome that. 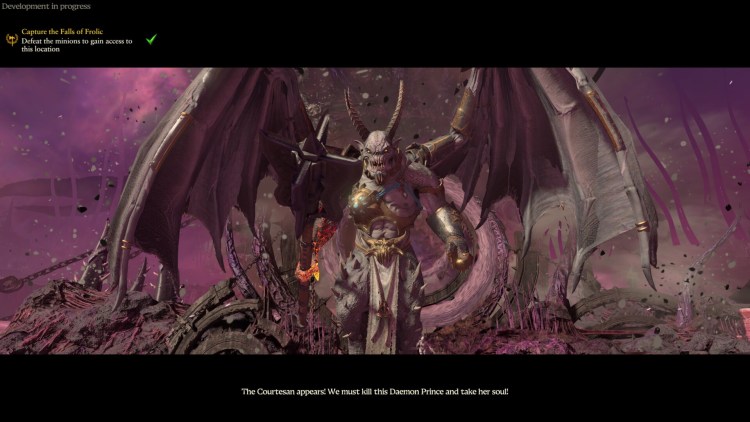 PCI: Since the Daemon Prince is essentially an original legendary lord, how much input does Games Workshop have when you’re designing new characters?

Whitson: We were fortunate that we’ve developed a great working relationship with Games Workshop. I think, fundamentally, they’re comfortable working with us because of our history in making games, as well as how we approach the lore. We want to depict what they’ve created in the way that they’ve created it within the context of our games. For instance, you’ve got Grand Cathay and Kislev. They’ve always been fan favorites over the years, but they’ve never had their own army books. There may have been a pamphlet for Kislev in a White Dwarf magazine, but they still remained a favorite [in spite of being under-represented on the tabletop]. Games Workshop approached us saying that they were on the verge of fully [fleshing out] these races in terms of rosters, characters, and background. That gave us an opportunity to watch their designers as they went through that creative process, and then we started envisioning how we would depict those races faithfully within our game.

Sinclair: The Warhammer games are something we’ve all grown up with. They’ve been around for almost 40 years now. Most of us were playing these games and painting miniatures as kids. It’s really something that we treat with great respect. In a way, we wanted to make the game that we envisioned as kids.

PCI: Do you remember when Mannfred destroyed the world and The End Times happened? How did that originally affect your development of the franchise?

Whitson: We did approach Games Workshop and they presented their plans for The End Times. But, we had already started the development of Total War: Warhammer. We decided to continue with the 8th Edition as our main reference. We couldn’t really jump track all the way to The End Times, so we [followed that concept] to be more consistent in how we’ll introduce new factions and mechanics in the trilogy. Ultimately, we wanted to do everything [for the trilogy], and the culmination of that is for all of the content to come together in a massive, combined map [similar to Mortal Empires in Total War: Warhammer II]. 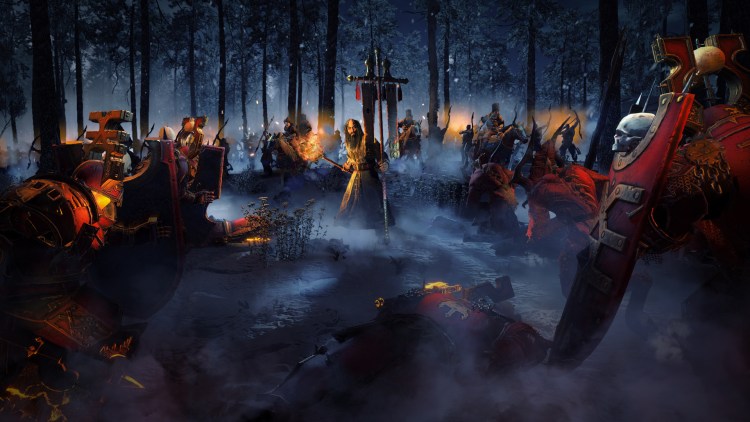 PCI: Considering the “feature creep” when you introduce new factions/races and DLCs, how challenging was it to incorporate everything that you have planned while making sure that the game remains balanced?

Sinclair: It’s been a tricky process. When we were planning Total War: Warhammer III, we were still releasing content for the first two games. That became really useful since we got to see player feedback [on what the community wanted]. And, yes, it can be seen as “feature creep” when we add these new mechanics. But, just like with Warhammer II, we got good feedback when we reworked factions like the Empire and Greenskins. So we just gotta keep doing what we gotta do. Years down the line, players might be surprised by a new suite of mechanics.

Whitson: That’s the joy when we’re developing the series. We have an opportunity to look at what players are saying whenever we do DLCs, FLCs, and patches. Maybe there’d be a chance to incorporate certain changes as well, like with the Greenskins or the rework of cavalry charges. 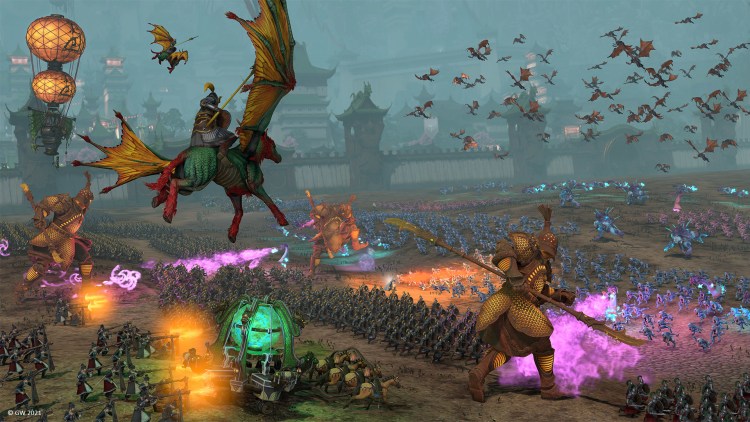 PCI: We know that Be’lakor is the primary antagonist in Total War: Warhammer III‘s campaign. Is there a chance that Be’lakor would somehow manipulate or attempt to challenge the Daemon Prince that you’re controlling?

Whitson: Well, Be’lakor is present in the game. That’s the only thing that we can mention for now, but he definitely plays a major role in the core narrative.

PCI: When Total War: Warhammer III was announced, I had a feeling that Thanquol would get introduced. However, I guess he’ll be future DLC since he still remains popular. Obvious choices also include the Chaos Dwarfs and Neferata. Any big plans ahead?

Sinclair: I remember doing an interview when we had just released Total War: Warhammer and a Swedish guy asked me when we’d see the Snotling Pumpwagon for the Greenskins. Back then, I wasn’t really sure. I knew we were going to add new races, but would we be able to release every single unit? Then, by the end of Warhammer II‘s development, including DLCs and free content, I really think that we hit everything and more. So, I think that the ones you mentioned are not off the table just yet. Obviously, we can’t talk about anything we’ve planned, but fans won’t be disappointed.

Whitson: I think everyone’s got a favorite that they can’t wait to come out. The way we’ve handled our games is that you could see the scale of our ambition and what we want to achieve [with the trilogy]. We want to try and [do everything] if possible.

That does it for our interview with Jim Whitson and Mark Sinclair of Creative Assembly. You can check out the rest of our Total War: Warhammer III preview series as we wait for the official launch on February 17. We delved into the Daemon Prince/Legion of Chaos faction, Miao Ying/Grand Cathay, and Realms of Chaos/campaign structure. Lastly, you can watch the Daemon Prince trailer below: