Total War: Warhammer III pits the champions of Chaos against the defenders of the civilized world. From the snow-covered oblasts of Kislev and the green meadows of Grand Cathay to the ravaged Realms of Chaos, eternal conflict and enmity will reign.

But, we still need to ask how well the game performs under the hood. Now, to kick off our Total War: Warhammer III technical review, we’ll first have a look at the system requirements.

The system requirements for Total War: Warhammer III come from its Steam store page. Do keep in mind that these are for 1080p gaming. Even though my rig is well beyond what’s necessary, I’m playing on 4K resolution as well. 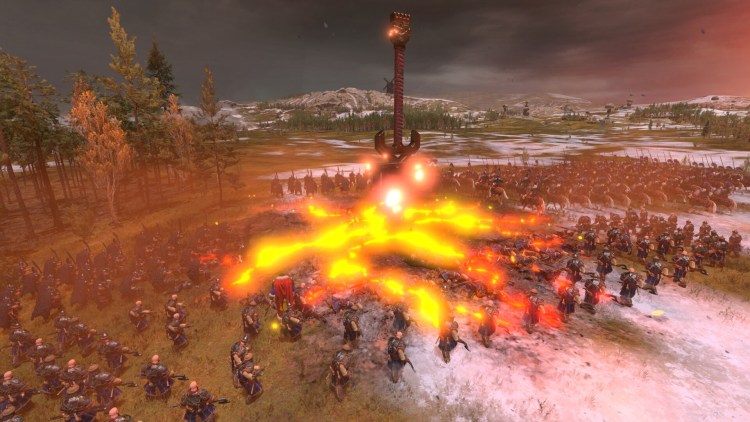 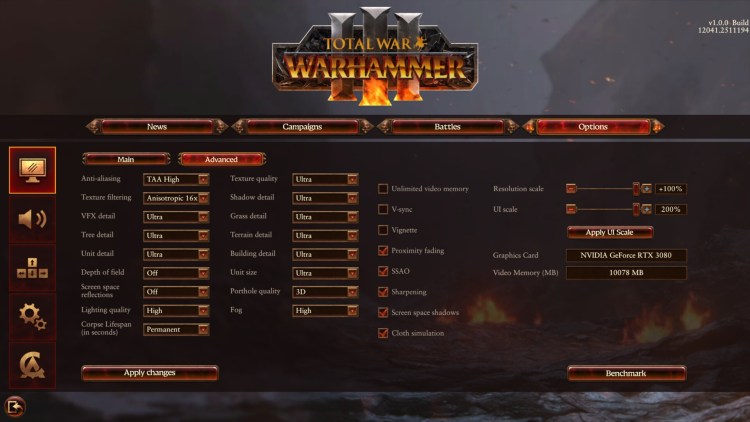 For the Total War: Warhammer III graphics comparison, I’ve decided to use three sets of images (one from the campaign map and two from the battle benchmark). I used the Ultra, High, and Low presets, though the screenshots themselves required some rough approximations. For instance, the camera focus might be different when you start a new campaign. In any case, you can click on the images below for a larger view. 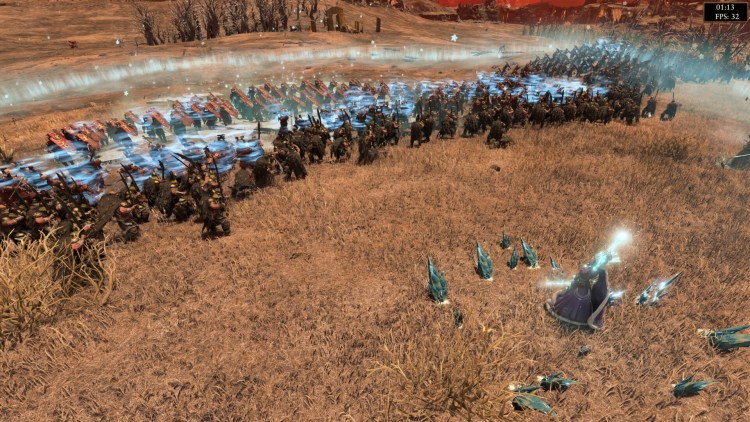 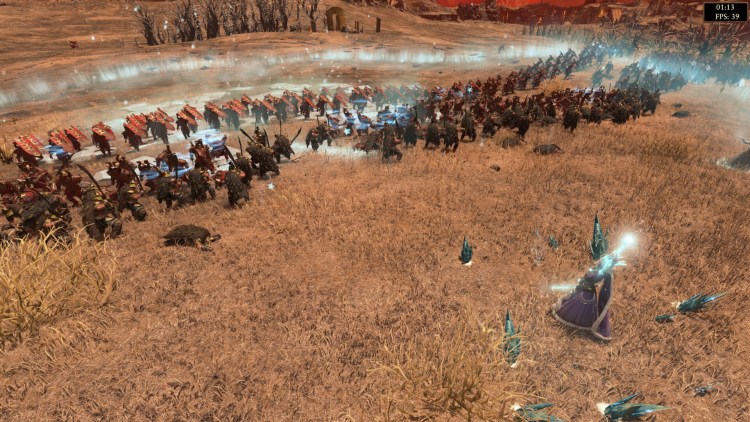 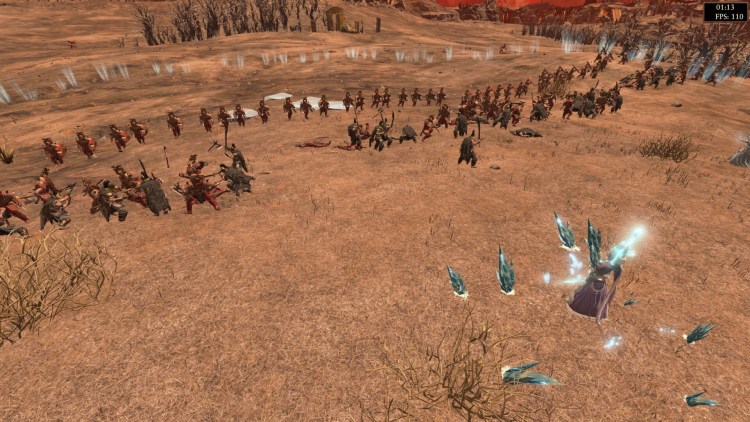 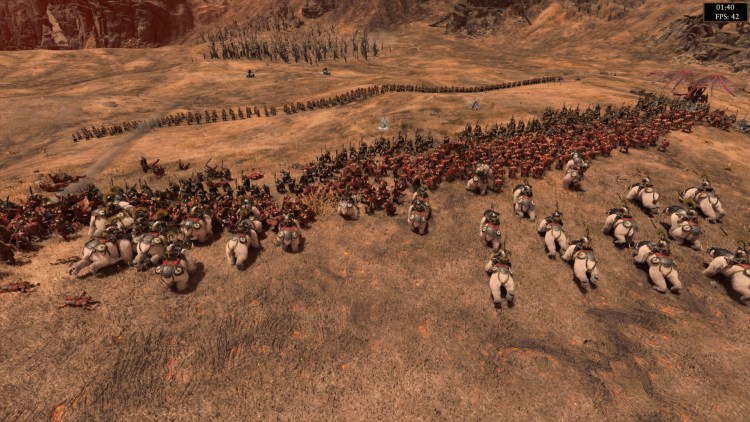 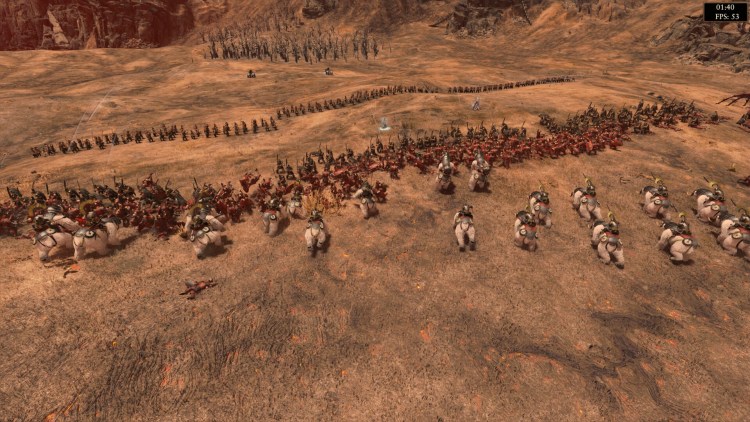 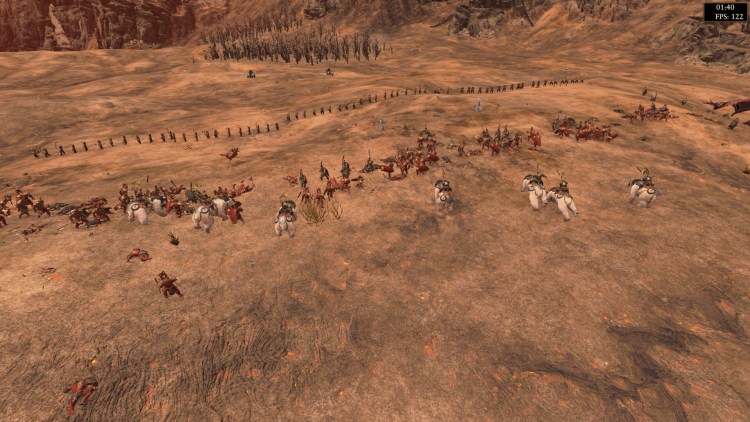 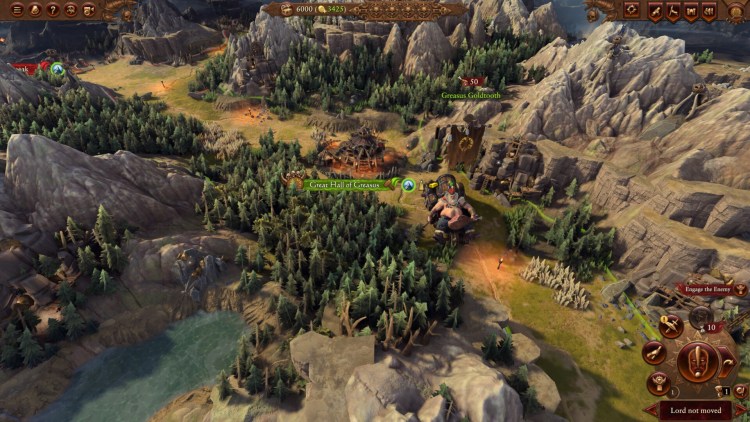 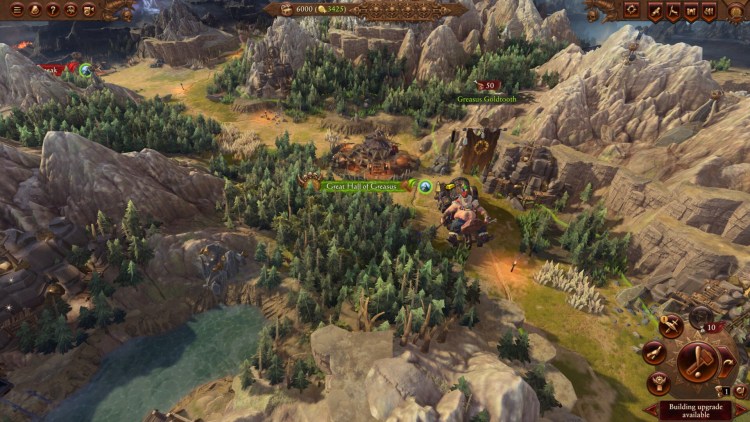 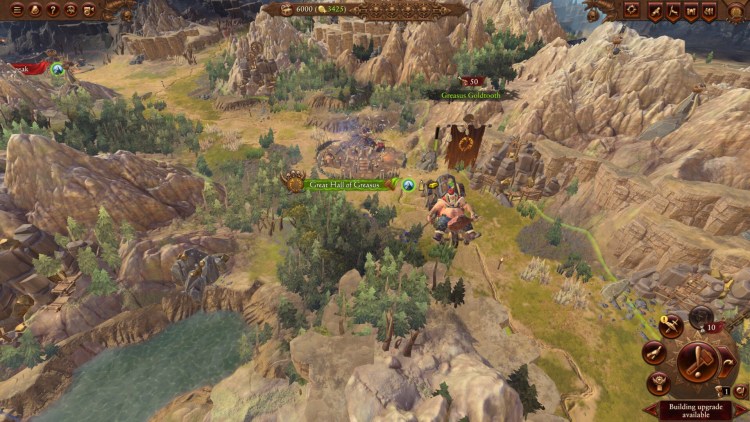 The most notable changes between Ultra/High and Low are the rough and bland textures for the latter, as well as smaller unit sizes. For Ultra versus High, the differences are more subtle, such as object shadows and spellcasting effects.

As for the Total War: Warhammer III performance benchmark, I obtained the following results based on the battle scene:

It’s worth mentioning that the battle benchmark isn’t indicative of true performance when you’re actually playing. The benchmark itself is a specific capture of a short moment, vastly different from lengthy battles with multiple armies comprised of thousands of units. 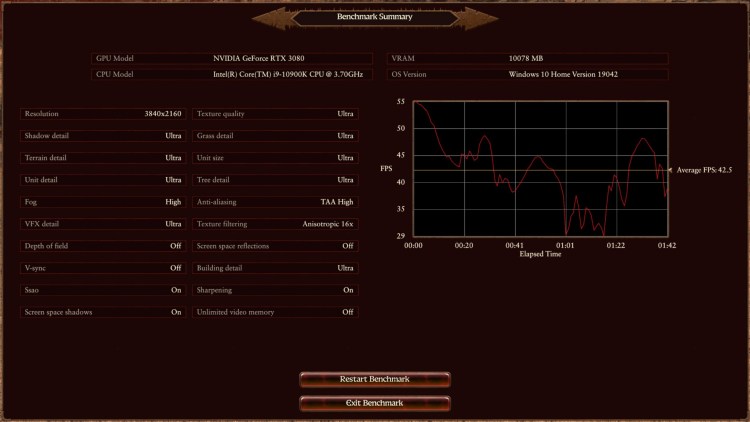 Next up are the gameplay settings for Total War: Warhammer III. This is where you’ll see advisor tips frequency, color profiles, banner sizes, and more. I would also suggest enabling unit running and guard mode, but disabling default skirmish mode and default skirmish mode (hybrid units). Skirmish mode can be a hassle especially when you forget to toggle it off due to fighting a lot of battles. Your troops with ranged weaponry could accidentally back away instead of firing even when melee soldiers are right in front, so manual control is always better. 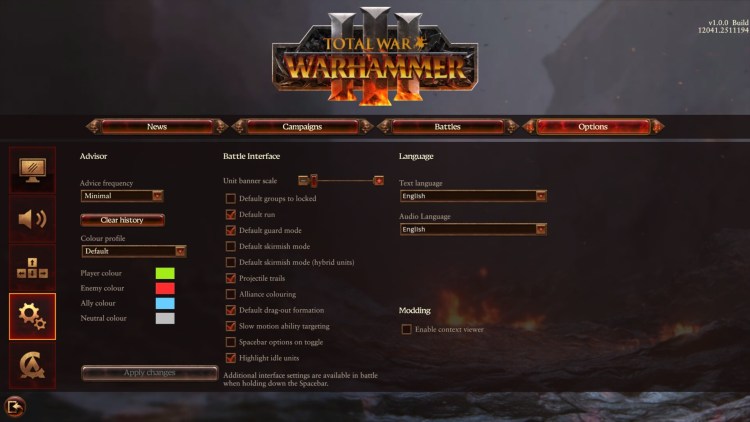 Here, you’ll see the control settings and keybinds (you can always make changes to your liking): 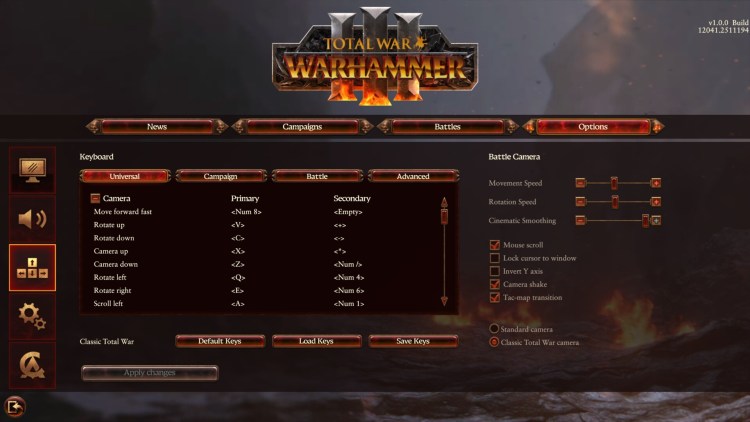 Finally, these are the game’s audio settings: 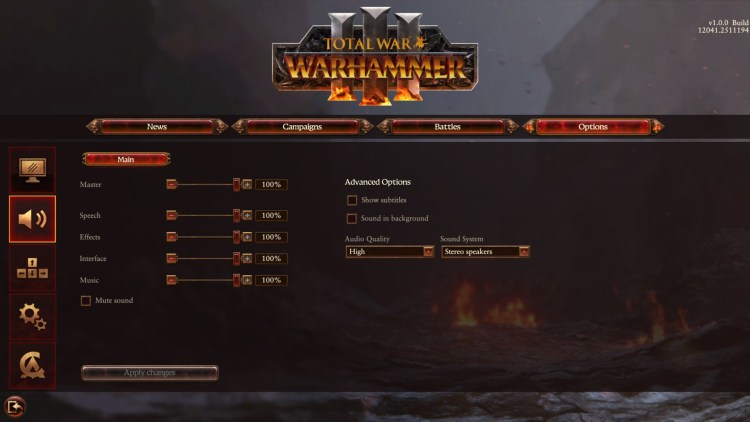 Even with a high-end rig, I was still noticing framerate drops while playing Total War: Warhammer III. Granted, this was for 4K gaming, which is par for the course especially if you have countless units on your screen at any given time. The worst offenders were Tzeentch units (i.e., Blue Horrors, Pink Horrors, and Flamers). The barrage of eldritch fire made for drops down to 30 fps.

I did, eventually, tweak my settings ever so slightly (i.e., disabling depth of field, screen space reflections, and screen space ambient occlusion, as well as lowering shadow detail). These changes made my playthrough more manageable. But, to be fair, I also tend to pause often while giving orders during battles. As such, these issues were mostly negligible in the grand scheme of things.

Furthermore, the faster end turn time from a Warhammer II update is still present, so you won’t need to painstakingly wait for over a minute just to progress. Just be sure to install the game on an SSD. Lastly, if you’re interested in campaign mechanics, faction perks, and other tidbits, don’t forget to check our official review. 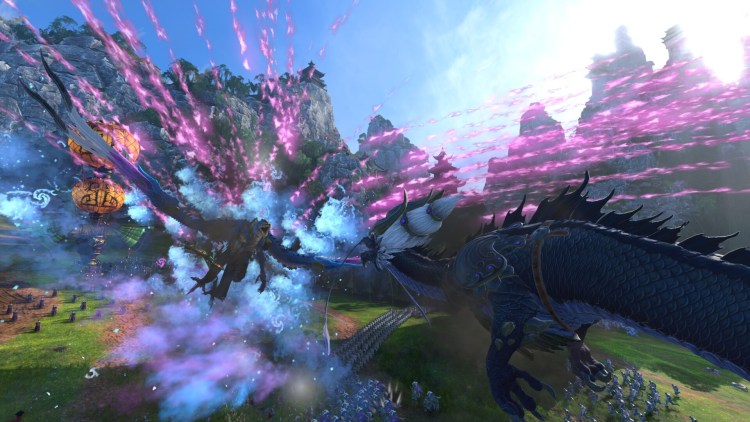 I was checking Reddit earlier today and I saw that players were having performance issues with Total War: Warhammer III. For the sake of transparency, the results I’ve outlined above were all done earlier this week, prior to the game’s release. However, a couple of things happened since then: Nvidia released a new driver, and there was a massive patch that took a while to install (this coincided with the preload).

When I saw the recent posts and comments, I decided to run the benchmarks once more using the same settings. There was definitely something off. But, as of now, I’m not entirely sure what caused it. We’ll try to clarify the matter just in case. 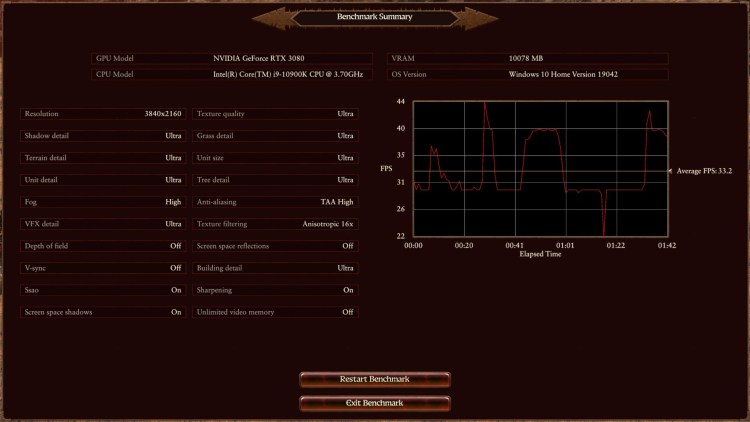 How to build the best Call of Duty: Warzone Pacific Klauser class